A company entering the light-gauge metal cutting and engraving market doesn’t need to spend $500,000 or more on a high-power CO2 or fiber laser. “Somebody cutting 0.060-in. steel all day doesn’t need a 2,000-W laser,” says Derek Kern, president of sales for Kern Laser Systems. A 400-W laser can handle the job.

Kern Laser Systems offers lower watt cutting and engraving systems. “We are unique to the industry,” Kern says. “We offer the engraving ability of the small machines and the light-gauge metal cutting ability of larger systems, which are typically not designed for engraving.” 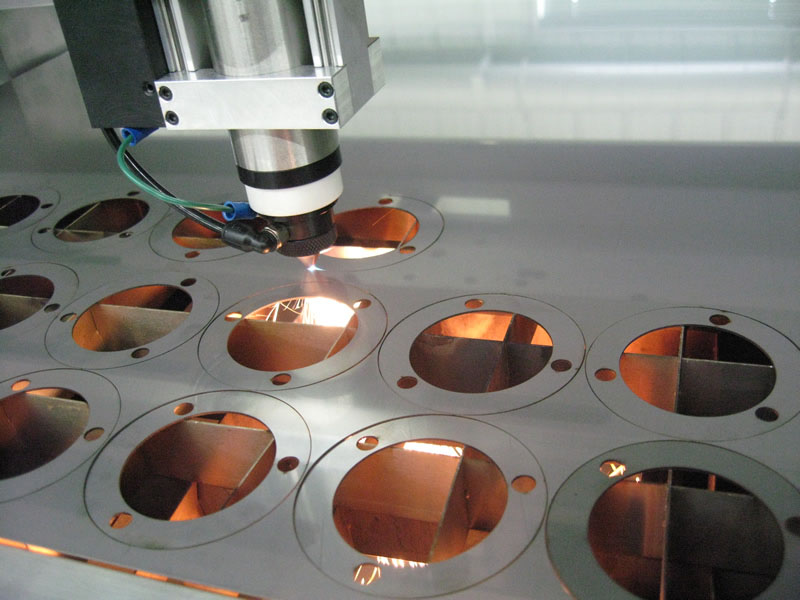 Stainless steel being cut into production parts with a Kern laser system.

Kern’s HSE laser system is a versatile fit for many applications and markets. In addition to light-gauge metal, a lot of job shops and fabricators use it for cutting plastic, foam, wood and ceramics.

On the engraving side, the machines are an alternative to the smaller enclosed desktop models that are not used for metal cutting. The engraving also can be applied to wood, plastic, glass, marble, granite and even metal.

Also, the 250- and 400-W lasers can cut reflective metals like aluminum and brass. If the beam reflects off the metal and backtracks down the laser path, the beam protection isolator picks it up and shoots it into a beam dump so it can’t get back to the laser source and damage the laser, according to Kern. Below 200 W, the laser doesn’t have enough peak power to pierce through reflective metals. 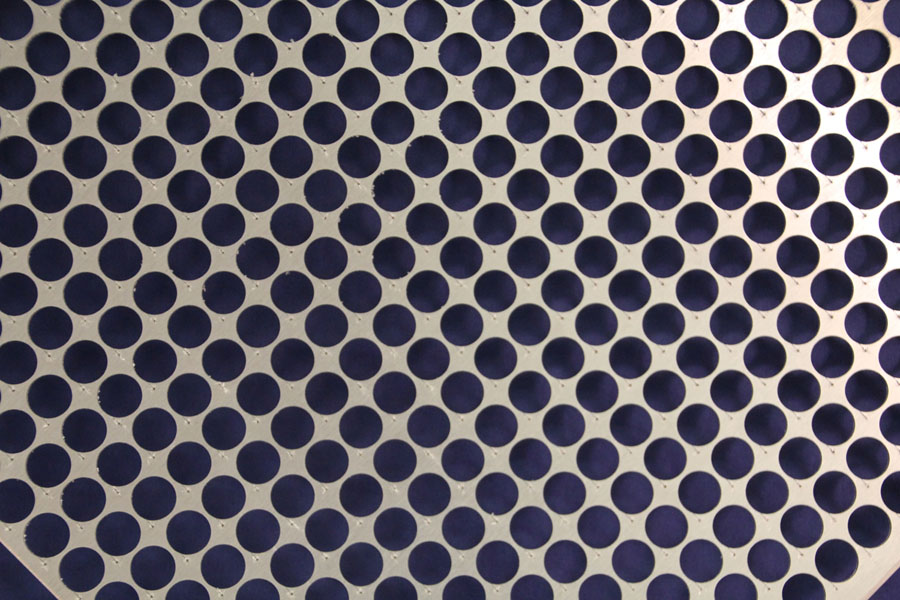 Holes cut in metal with a Kern laser system.

The big difference between a Kern laser system and the high-power systems is Kern uses a sealed CO2 laser. “Our lasers are different than the CO2 flowing gas lasers,” Kern says. “Flowing gas lasers require a gas mixture for the laser source and also an assist gas injected through the cutting nozzle.”

Kern uses a sealed CO2 laser system. “The gas mixture that the laser requires to operate and ionize the beam is actually already in the all-metal laser tube and it is sealed,” Kern says. “So all you need is the assist cutting gas, meaning a tank of nitrogen or oxygen.”

The only other consumable is distilled water for the closed-loop chilling unit. The laser tube itself could also be considered a consumable because it does have to be recharged typically after about five years.

In addition to gas consumption, flowing gas lasers have ongoing maintenance requirements that the sealed lasers do not.

Kern’s largest HSE machine is 80 in. by 120 in. and its smallest is the Micro, which is 24 in. by 24 in. The machines have a Class 4 open bed design for ease of loading and unloading parts; an optional Class 1 enclosure is available.

The HSE laser system has many features. One highlight is Kern’s KCAM cutting and engraving software. It features the Cut Optimizer, which determines the most efficient cut order for the parts so travel time is reduced. The software also provides vector path speed control, which slows the cutting speed going into sharp corners and accelerating out of them for smooth, consistent cutting.

Kern laser systems can be equipped with pulsed laser technology. Pulsed lasers allow for a high peak laser power for a short period of time, which allows metal to be cut with lower power lasers. Once the pierce is successful, the laser does not need as much power to maintain the cut.

A rotary attachment option is for use with any cylindrical material, namely metal pipes, such as motorcycle pipes and pipe fittings. The rotary device is driven by a servomotor, and a lathe chuck secures one end of the pipe while spinning it, and a tailstock keeps the pipe spinning flat and true.

The dual-head laser system is for high-production cutting requirements. “We mount two lasers on the same gantry, which doubles cutting production,” Kern says. “Some laser companies use one laser tube and split that beam into two. For example, with a 200-W laser you would have two 100-W beams. We install two separate laser sources on the machine so you have two 200-W beams.”

The K-Vision package is a hardware and software solution for cutting printed materials. A camera mounted near the nozzle measures the distance between registration dots on printed materials. The software then calculates for inaccuracies by automatically adjusting the position of the cutting file. “The camera system automatically lines up the file to the sheet of metal you are cutting,” Kern says. “The alternative would be to adjust the sheet on the table so it is square and ready to be cut. This feature is for anyone cutting printed materials, such as the sign industry.”

Kern’s Micro laser system with all these same capabilities is available with a small footprint of 24 in. by 24 in. and 24 in. by 48 in. 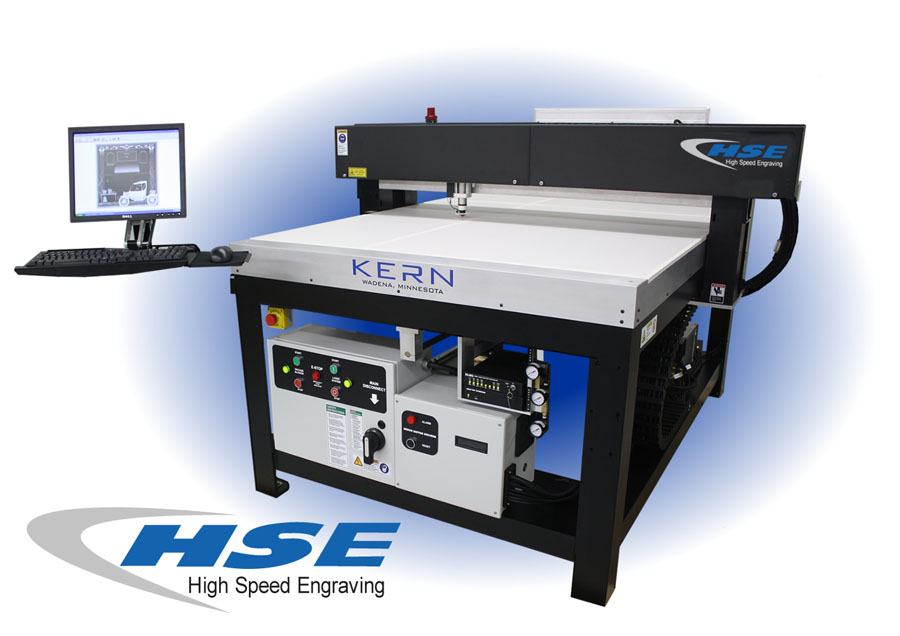 Kern’s HSE Laser System is a versatile fit for many cutting and engraving applications.

Kern Laser Systems is a first- and second-generation, family-owned business that, like a lot of businesses, started in the family garage. In the early 1980s, patriarch Gerald Kern started manufacturing motion control systems. A decade later, he traded one of his CAD/CAM controllers for his first laser, which he integrated onto a motion system and eventually offered as a cutting and engraving laser system.

Along with Derek, who has been president since 2011 and with the company since 2000, four other family members help run the business. 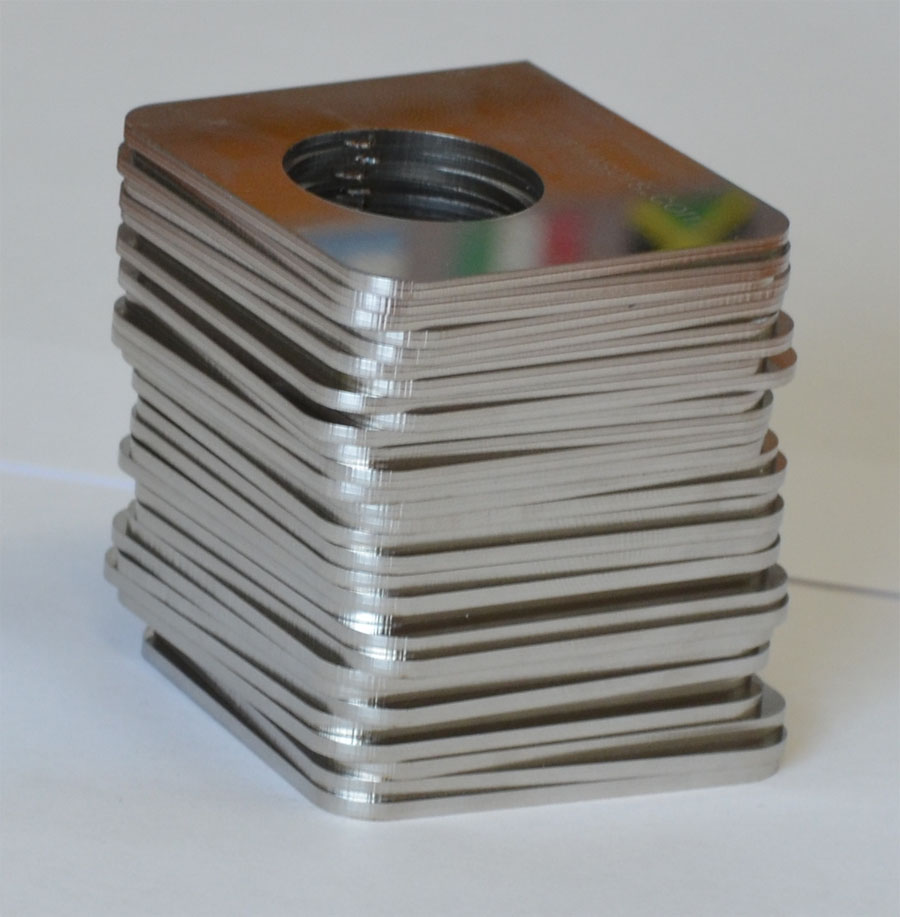 About three years ago, the company started manufacturing its own CO2 lasers through its sister company, Kern Technologies, where Gerald Kern now works. “We’re building our own laser sources for the 100-, 150- and 200-W laser systems,” Kern says. “Having our own lasers allows us to service our customers properly by keeping replacements in stock and implementing improvements at a much faster rate.”