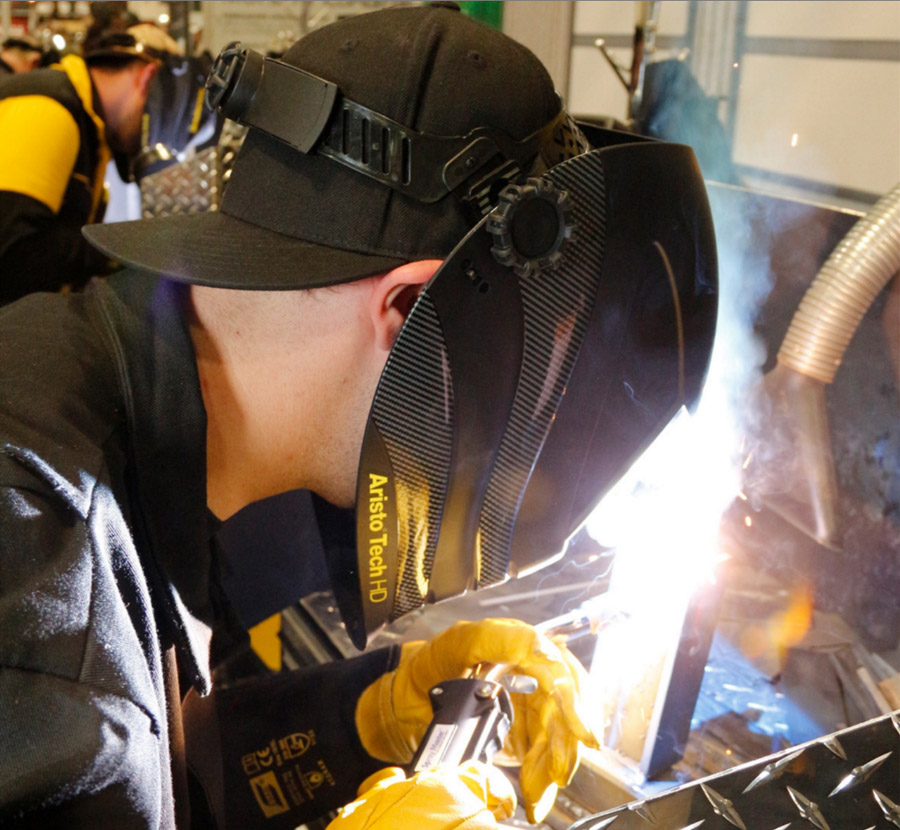 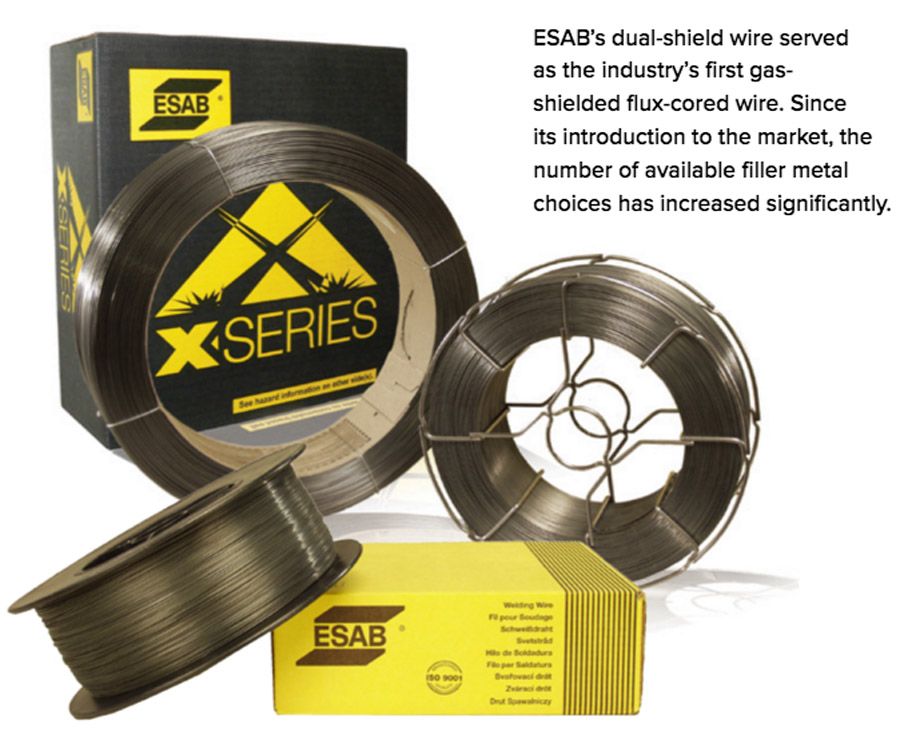 Since ESAB introduced the first gas-shielded flux-cored wire, making “dual shield” synonymous with the process, the number of filler metal choices available has increased significantly. However, even for basic applications, such as welding A36 steel beams, the complexity of selecting and correctly running a gas-shielded flux-cored wire can produce better results after engaging a knowledgeable filler metal expert.

For example, one large structural steel fabricator had used a 1/16-in.-dia. all-position wire for years. However, some welders struggled to make a 5/16-in. fillet weld in one pass without undercut issues. Because they could not consistently deposit a large enough weld bead, some welds required multiple passes to avoid rework. 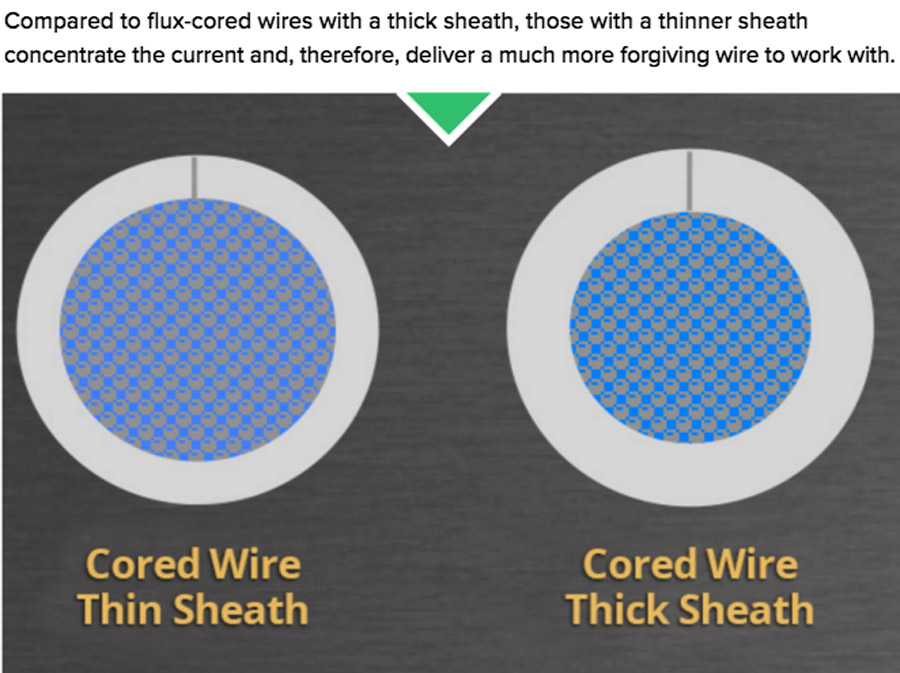 Did the fabricator have a welder training issue? Maybe not. A representative from a different filler wire manufacturer observed that although the fabricator was using an all-position (E71T-9C) wire, most of the welders only welded in the flat/horizontal position. As result of these observations, the fabricator tried a 1/16-in.-dia. E70T-9C wire. Designed for flat/horizontal welding, this wire can create a weld bead profile that will ensure good sidewall fusion and penetration in a 5/16-in. fillet weld.

After changing to the E70T-9C wire, all but one of more than three dozen welders passed the weld qualification test on the first try compared to a 30 percent failure rate when they tested using the E71T-9C wire. In short, the fabricator employed skilled welders; they just needed the right wire. In addition to reducing rework, the welders could fill the joint in one pass instead of multiple passes – a double win for increasing productivity.

Another similar story: A fabricator of yellow goods had problems with obtaining consistent fusion. Here, the wire type had been chosen correctly, but the company selected a 0.045-in.-dia. wire. Because it’s perceived as the easiest wire to run, it’s become the most popular diameter flux-cored wire. However, smaller diameter wire can deposit metal more slowly, giving the welder more time to react to the weld puddle.

Considering the wire choice, the welders had no room for error: They had to have near-perfect gun angles and mechanics to ensure good fusion on both sidewalls. In reality, the “easier” wire to run wasn’t all that easy.

To solve the problem, the filler wire manufacturer recommended stepping up to a 0.052-in.-dia. wire to create a weld bead with a slightly larger throat (which was permissible). With a weld bead more effectively sized for the joint, the welders could have less-than-perfect gun mechanics but could consistently achieve good sidewall fusion.

For this same reason, some of the major government shipyards have standardized the 0.052-in.-dia. all-position flux-cored wire. They know it will provide consistent fusion for making a 1/4-in. fillet weld when the welders make a straight stringer bead. 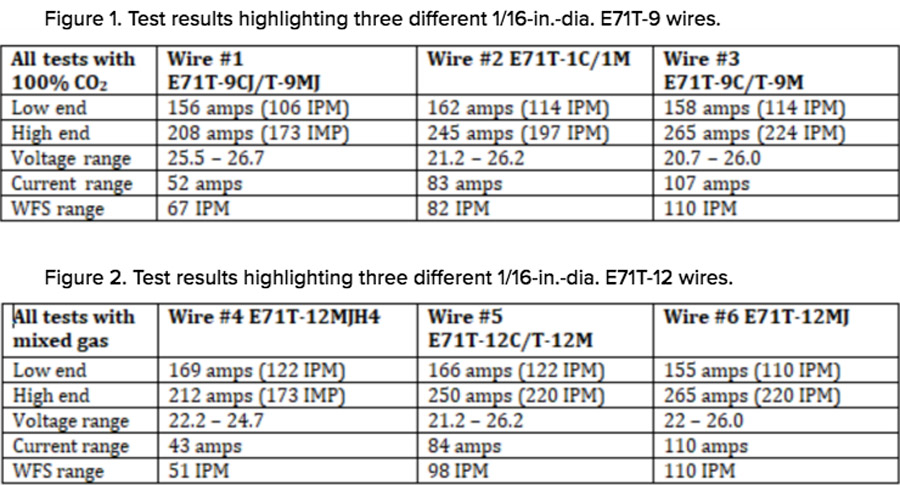 Unfortunately, incorrectly matching wire diameter to the joint size and plate thickness is an all-too-common issue. Part of the reason is that unless welds undergo destructive or non-destructive testing, there’s no way to truly know – with absolute certainty – that the desired weld quality has been achieved. Not all applications require testing, so there are enough situations where a weld may look good, but it might have incomplete fusion or slag entrapment, and those flaws won’t show up until later in a part’s life cycle.

Choosing a gas-shielded flux-cored wire is not as simple as picking one with the right diameter and AWS classification. As noted, fabricators choose flux-cored wires because they can provide a variety of benefits, and filler wire manufacturers can tailor the wire to emphasize one or more of these benefits.

Further, flux-cored wire design continues to evolve. For example, some wires have a relatively thicker sheath. Because the steel strip carries the welding current, cored wires with a thicker strip will require more voltage for the same wire feed speed or less wire feed speed for the same voltage. These wires will also produce higher deposition rates.

However, maximizing deposition rates is not always the No. 1 priority. As a result, filler wire manufacturers developed flux-cored wires with a thinner sheath and higher fill ratio, such as ESAB’s Dual Shield X series. A thinner sheath concentrates the current, which in turn, produces a much more forgiving wire. A wire is said to be forgiving if the welder can obtain good results:

It’s important to note that results that can be considered “good” refers to results that maintain the predetermined fillet size, good fusion, acceptable bead appearance, minimal or no spatter, and good slag release or easy slag removal. 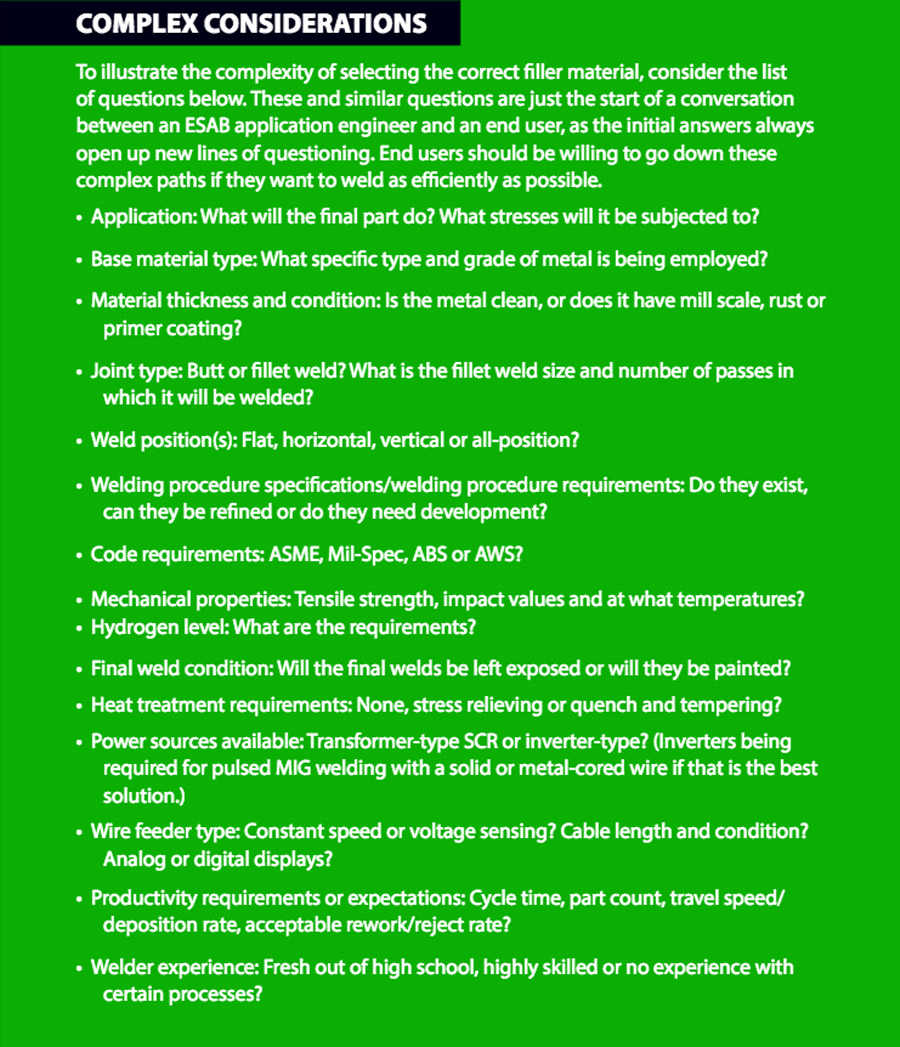 These results show that wires #3 and #6 offer the broadest operating ranges, which gives welders more freedom when setting up their systems.

Experienced welders who can manage higher wire feed speeds can set parameters toward the high end and start “pounding wire.” Welders who need a little more time to react to the weld puddle can dial parameters toward the low end. Welders who want to transition from the flat/horizontal to vertical-up position without adjusting parameters can do so, too, which is a real benefit if they’ve crawled into a tight space like the hold of a barge.

In addition to benefits related to personal preferences, consider that forgiving wires may also help with equipment limitations. For example, voltage-sensing feeders only allow the welder to adjust wire feed speed. Voltage is set at the welding power source, and the power source may be located some distance away. Adjusting and fine-tuning arc performance requires a second person or multiple trips between the feeder and the power source (or it doesn’t happen at all and the welder makes due with less-than-ideal settings).

Also consider that some popular portable wire feeders use analog controls, and setting values may be more a matter of approximation compared to a digital readout. Still, even with a constant speed feeder with wire feed speed and voltage controls and digital display, all systems will experience voltage drop with long lead lengths. Unless the welder took voltage readings at the arc and compared them to voltage set at the machine, there would be no way to know actual welding parameters. In summary, flux-cored wires with a wide operating range make it easier to fine tune the arc, and that benefits a multitude of real-world welding scenarios.

This article has touched on some of the more universal experiences with flux-cored wires, such as the relationship between wire size and fillet and welder preferences. With the ability to adjust formulations for enhanced mechanical properties, lower hydrogen levels, lower fume levels and more, engaging with a filler metal supplier can produce highly specific results. Many of today’s standard filler wires started out as formulations developed to solve one particular customer’s need.

As end users become exposed to different filler metals, there are a couple of points to keep in mind. First, for those in a supervisory position, it’s important to provide welders with the opportunity to simply experience the wire in a trial setting (e.g., test joints [never flat plate] in the appropriate positions).

Next, don’t tell the welders that the newest “wonder wire” will deliver results X, Y or Z. Just let them use the wire, providing proper guidance to ensure correct contact-tip-to-work distance, gun angles and optimized parameters (regardless of broad operating ranges, every filler wire manufacturer will say what the “sweet spot” settings are).

After the welders spend some time welding, ask them what they experienced. Some may notice significant differences, others minor differences and some none at all. Welding is personally intense, and a good experience can only be defined as such by the person under the hood. Remember that factors such as wet-out and puddle control can be hard concepts for non-welders to grasp. Think of the difference between being able to ride a bike and not being able to ride; the difference is that profound.

Lastly, make sure deposition rates and mechanical properties quoted by the wire supplier are produced using real-world conditions. When it comes to gas-shielded flux-cored welding, those conditions include plate that has a less-than-ideal surface and less-than-perfect fit-up and a welding setting that bears no resemblance to a climate controlled laboratory. After all, the reason a gas-shielded flux-cored wire is selected in the first place was because it could fight through mill scale, bridge gaps and deliver code-quality welds even in a humid gulf setting.