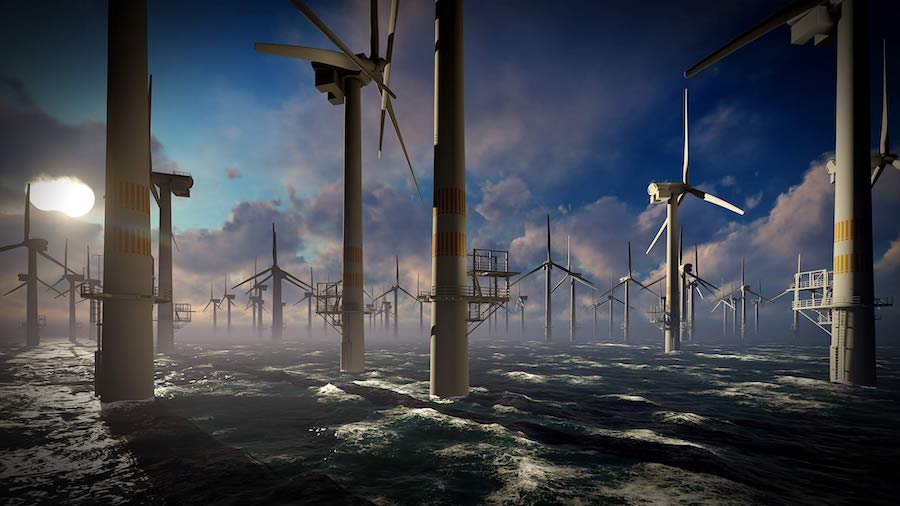 current offshore wind energy production is only prevalent on the East Coast. But by 2030, offshore activity is expected on the West Coast as well as in the Gulf of Mexico.

To get ahead of the eight ball, Pemamek, a leading provider of equipment used for welding and assembling these massive wind towers and other components used by construction companies focused on the energy industry, is already busy developing solutions. These innovations are focused on the production of new U.S. infrastructure – infrastructure that goes further from the shore than ever before.

According to the U.S. Energy Information Administration (EIA), renewables became the second-most prevalent electricity source in 2020. This included wind, hydroelectrical, solar, biomass and geothermal. However, EIA reports that the outcomes of 2020 were due mostly to less coal usage and the steady increase of wind and solar. Wind, the most prevalent source of renewable electricity in the U.S., grew by 14 percent from 2019 to 2020, and the trend is continuing.

Christian Beltoft, director of wind energy, sales and development at Pemamek, has been busy traveling throughout the world serving customers building wind energy infrastructure. He’s also in contact with planners on the East Coast of America, seeking out new ways to harness the wind offshore.

“It’s picking up a lot faster than we expected even six months ago,” he said of the interest in wind energy. “We’ve have huge projects going on in the East Coast for offshore wind towers and foundations.”

Most people are familiar with the traditional wind tower, be it inland or offshore, as the two look quite similar. But today, a new approach to construction is required for wind tower foundations for deeper offshore placement.

“They are going farther and farther out into the ocean,” Beltoft says. “They are growing in diameter and length; the structures are always evolving. Everyone wants green energy; they just don’t want to look at those around their own back yard, and they don’t want them that close to the coastline. The farther out they put them offshore, the more stable the wind, so they get better energy out of it.”

The foundations are called “monopiles,” which serve as the base of the wind tower and weigh upwards of 4,000 tons. The monopiles built today are nearly 33 ft. in diameter and placed in the seabed, serving as sound footing for modern wind towers that reach nearly 775 ft. into the sky. But Beltoft says all signs lead to the construction of even larger structures.

“The 40-ft. diameter monopile is going to be a reality in about five years,” he predicts.

Beyond the 40-ft. monopile on the horizon, even newer design are always being developed: a floating foundation that is tethered to the sea floor with long cables. Instead of ramming a monopile into the sea bed, the cables keep the wind tower base in place. Beltoft says the technology is about a decade in the making.

“You can go really deep,” he begins, “around 650 to 1,000 ft. of water. You can place them really far out to where you couldn’t put a monopile. They are different, but really similar to the technical structures that are used in submarines, shipbuilding, oilrigs and wind tower manufacturing, which are all business areas that Pemamek have expert knowledge in and have been working in for the last 50 years. We have the right solution and equipment to build any floating monopile regardless of design and size.”

Tools for the job

Pemamek is well known in the shipbuilding and energy industries, among others, for its positioning devices built to handle massive materials, such as the sections of the wind towers that must be meticulously welded while held at just the right position. Robotic welding technology developed by Pemamek brings more precision to every weld, as well as improved safety. One operator can do the work of multiple welders.

Some of Pemamek’s go-to solutions for wind tower construction are its platform with multiple welding heads and the column and boom for user-friendly control, welding positioners for placing the tower pieces in place and roller beds for rotating the materials weighing up to 1,500 tons.

Pemamek also utilizes its engineers’ prowess to assist in fabricating the “cans” and many other components going in to the most modern wind energy equipment being built on the new wind farms, inland and offshore. One of the critical pieces of the puzzle that Pemamek has devised is the brains of the operation – WeldControl 500, which is an automated welding head combined with specialized software and laser guiding system to weld thick material in automated and way without weld defects.

“WeldControl 500 is kind of new,” Beltoft says. It’s almost like a robot, but it’s a program engineers can fit all of the welding parameters in.”

Beltoft explains that operators control the welding via touchscreens where they can choose from different programs for exacting welds. For example, he says to weld thicknesses of 50mm to 100mm, which is common for the monopiles where both sides of the material must be welded. WeldControl 500 will scan the seams while it is welding, so that it is always in the right position according to the preprogrammed settings done by the welding engineer.  Additionally, WeldControl 500 ensures tilting of the welding head, if needed, as well as adjusting the height all while simply working on its own. The operator becomes an observer and only supervises the welding process.

“One operator can do four welds at one time,” he says.