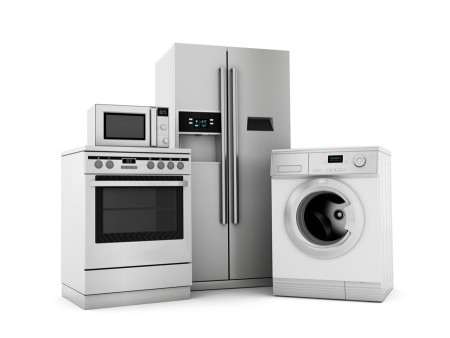 A variety of influencers affect the number of white goods (home appliances) that are produced and sold each year. While the role of many appliances in the kitchen and laundry room haven’t changed in decades (ovens cook meals, washers wash clothes and dishes, and refrigerators keep food cold), technology advancements and design elements continue to evolve, creating a demand for new models.

Furthermore, real estate markets have a great impact on construction trends, which can impact the demand for and the number of white goods produced in a given year. Considering the positive outlook on real estate and new trends in connectivity, 2016 is looking to be a year where the demand for white goods continues to build. Will robotic welding processes be in higher demand from manufacturers as a result?

The Commerce Department reported in February that spending on construction in 2015 was the highest since 2008 at $1.097 trillion, more than 10 percent higher than in 2014. More than 70 percent of that spending comes through the private sector, which includes apartments and new homes, which are outfitted with new appliances.

While construction is on the rise in the United States, other parts of the world are seeing improvements in the standard of living. China and India are highly populated countries where the standard of living is scaling upward, which means more residents are positioned to see household conveniences like washers, dryers and kitchen appliances in their homes. Expanding into wider global markets could be a very real possibility for white goods manufacturers.

The Urban Land Institute (ULI), a nonprofit education and research institute, collaborates with PricewaterhouseCoopers to deliver the annual “Emerging Trends in Real Estate” report for the United States and Canada. The 2016 report shines a spotlight on the rising prices of real estate in “gateway” markets, which are cities that people are moving to en masse, which impacts new construction.

These “hot” cities include Denver, San Diego, Austin, Tex., Portland, Ore., Durham, N.C., Nashville, Tenn., Indianapolis and a handful of others. The outlying suburbs of these cities also gain more interest from prospective buyers and renters due to the rise in prices in the city, according to the report. Furthermore, millennials are also showing an interest in suburban living rather than seeking out housing in the city centers as the generations before them had.

This is good news for the white goods industry because when the real estate market trends downward, the cost of real estate decreases, but unemployment also becomes an issue. Home values go down and are tough to sell, foreclosures increase, construction jobs dry up and white goods are in less demand – all casualties of a failing real estate market.

So, just how much will these influencers impact the production of white goods? Delano Data Insights, a construction analysis firm, projects an increase in the number of major home appliance shipments to be 4.9 percent higher in 2016 than in 2015. The group forecasts that a total of 74.9 million units will be shipped in 2016 compared to 71.4 million in 2015.

In this age of connectivity, consumers expect more out of their home appliances. Smartphones and tablets can be used to control the television, lights and even a home’s thermostat. Could there be a push for a refrigerator that offers recipe suggestions based on the food items inside of it? If so, white goods manufacturers, of which there are around 300 in the United States generating around $20 billion in revenues, will see an increase in production.

The production increase won’t be a gradual climb, either. According to Intertek, a multinational product testing and certification company, the smart appliance and consumer electronics markets have already grown from $40 million in revenues in 2010 to $6.2 billion in 2015.

An example of smart technologies in home appliances includes the General Electric line of products that are Wi-Fi enabled, allowing users to check the status of a dishwasher on their phone, or receiving an alert once their wash cycle or dry cycle is finished.

Boston Consulting Group Inc. (BCG), a global managements consulting firm, says only 10 percent of manufacturing companies are utilizing robots. However, that number could increase to 25 percent in less than 10 years. Part of the reason for this is that countries that have historically offered cheap labor, such as China, are no longer offering that advantage to manufacturers. For instance, BCG says wages in China jumped by 150 percent from 1999 to 2006. Wage hikes continued from 2005 to 2010 at a rate of around 19 percent per year, according to BCG.

Unlike the automotive industry, which is a major consumer of robotic welding solutions, the white goods industry has been slow to take up the same technology, and there are good reasons for this. Larger appliances, like refrigerators, ovens, washers, dryers and dishwashers, use large pieces of thin sheet metal, which can be difficult for robots to work with, due mostly to positioning issues that come with working with lighter weight materials.

Yet there are efficiencies to be found in robotic welding processes, which means as demand for white goods increases, manufacturers will become more invested in finding ways to incorporate robots, including those that offer welding solutions, into their white goods production lines.