A visit to the zoo is a popular summertime outing with North American zoos welcoming millions of visitors each year. Elephants and giraffes, tigers and bears, monkeys and colorful birds are all quite a draw.

Often lost in the visit though, is the work that takes place behind the scenes to keep the animals comfortable and in the right place. Zookeepers make the rounds between exhibits ensuring the welfare of the animals in their care, while a large team of groundskeepers and maintenance professionals ensures the exhibits are safe and in good working order.

At more than 140 years old, the 23.5-acre Buffalo Zoo in Western New York has the distinguished honor of being the third oldest zoo in the United States. It houses exotic, endangered and local wildlife that move freely in large and modest enclosures with trees, streams, pools and other features representing their natural habitats. It attracts well over 600,000 visitors a year.

In 2001, the Zoological Society of Buffalo committed to the Master Plan, rebuilding the zoo to feature naturalistic exhibits and conservation education. Over a 15-year period, the zoo was transformed with major new exhibits and visitor amenities, such as a rainforest, heritage farm and arctic setting and renovation of the historic reptile house. The core experience of the new Buffalo Zoo is a series of realistic, immersive animal enclosures that take visitors on a journey around the world.

New animal additions that arrived just in 2017 include an addax, a Japanese macaque and the birth of a male Scandinavian reindeer. One of the most popular attractions is four African lion cubs born in 2016.

For the zoo grounds keeping crew, fabricating all of these new enclosures for the new occupants, while retaining some of the zoo’s 140-year-old charm, requires maintenance.

While most are excited about the new zoo arrivals, a few members of the maintenance team are actually more excited about another fairly new arrival, a Hypertherm Powermax30 Air. This air plasma system is different from most in that it comes with an integrated air compressor. For those who work at a zoo covering close to 24 acres of land – that one difference is a very big deal.

Joey Call, one of the zoo’s maintenance technicians, says he and a co-worker came upon the Powermax30 Air accidently. “We were at Praxair in Buffalo just picking up welding equipment and we stumbled upon it,” he says. “Once we learned that it had an internal air compressor, I knew we had to have it. I use the Powermax30 Air to cut everything now. We just made a stainless steel cage with it.”

The small, lightweight system’s fairly light 30-lb. weight, along with a shoulder strap and fold-up cable carriers for the torch lead and power cable, make the system super portable.

“All of our equipment needs to be portable,” Call explains. “We cannot bring the animal enclosures into the shop so we try to do as much fabrication as we can beforehand. We need the portability of the plasma system to complete the jobs.”

Instead of hauling two separate pieces of equipment – the plasma and a bulky air compressor – to the different exhibits, the team now takes one. A typical day might see Call and his co-workers tackling a dozen or more jobs that can range from a simple onsite repair to a major structural change. Changes like that might be done to ensure an existing exhibit meets new safety regulations. The team is also called upon to fabricate brand new fixtures like the stainless steel cage.

As far as Call is concerned, the portability of the Powermax30 Air is just the beginning. He also likes the speed of cutting with plasma, saying, “I knew how much time plasma would save us and we all know that time is money.”

Before getting the plasma system, the team had to use older, more manual methods like a drill or saw. Today, a job such as cutting an opening in a piece of stainless steel to create a locking mechanism for a cage is completed in no time.

“Cutting a hole is so much easier than drilling. It saves so much time,” Call says. The team also finds itself taking on more decorative jobs such as fabricating mounts for every single hanging planter and lamp found on the zoo’s property.

Another reason Call prefers the plasma cutter is that it can cut the many different types of metal he encounters at the zoo. The zoo has fixtures made of aluminum, stainless steel, carbon and mild steel so having one tool that can cut it all is very convenient.

Call’s time at the Buffalo Zoo stretches back seven years, but his experience with Hypertherm plasma actually started before that, at a previous job in which Call worked to repair railcars. He recalls liking the Powermax his company had much better than oxyfuel.

“The Hypertherm was a lot better than a torch. It was just so fast and easy to use.”

Hypertherm’s Powermax30 Air is easy to set up and operate. Other benefits include: 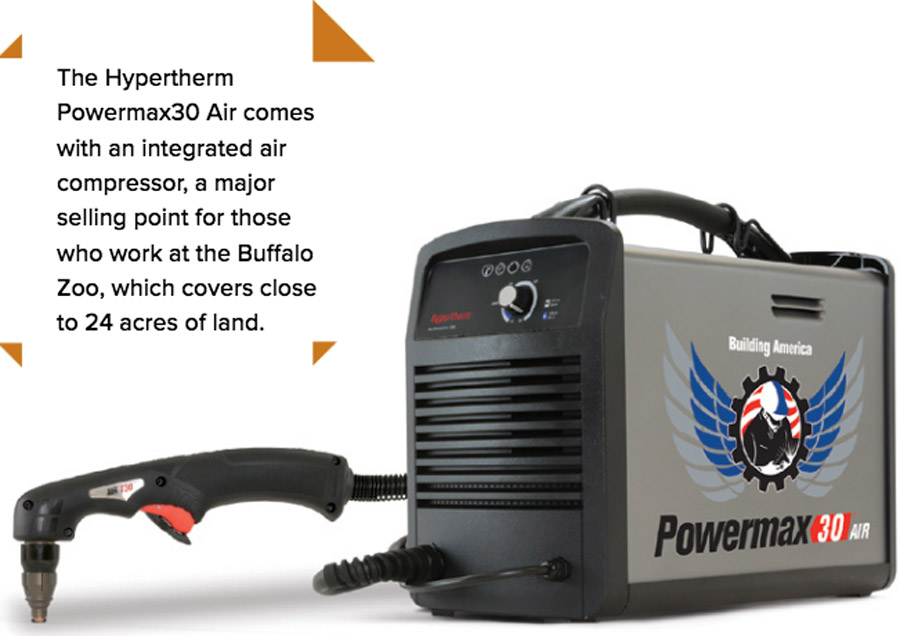 The small size and light weight of the Powermax30 Air means welders at the Buffalo Zoo – or on any project – can bring the equipment to the work, rather than bringing the work to the equipment. 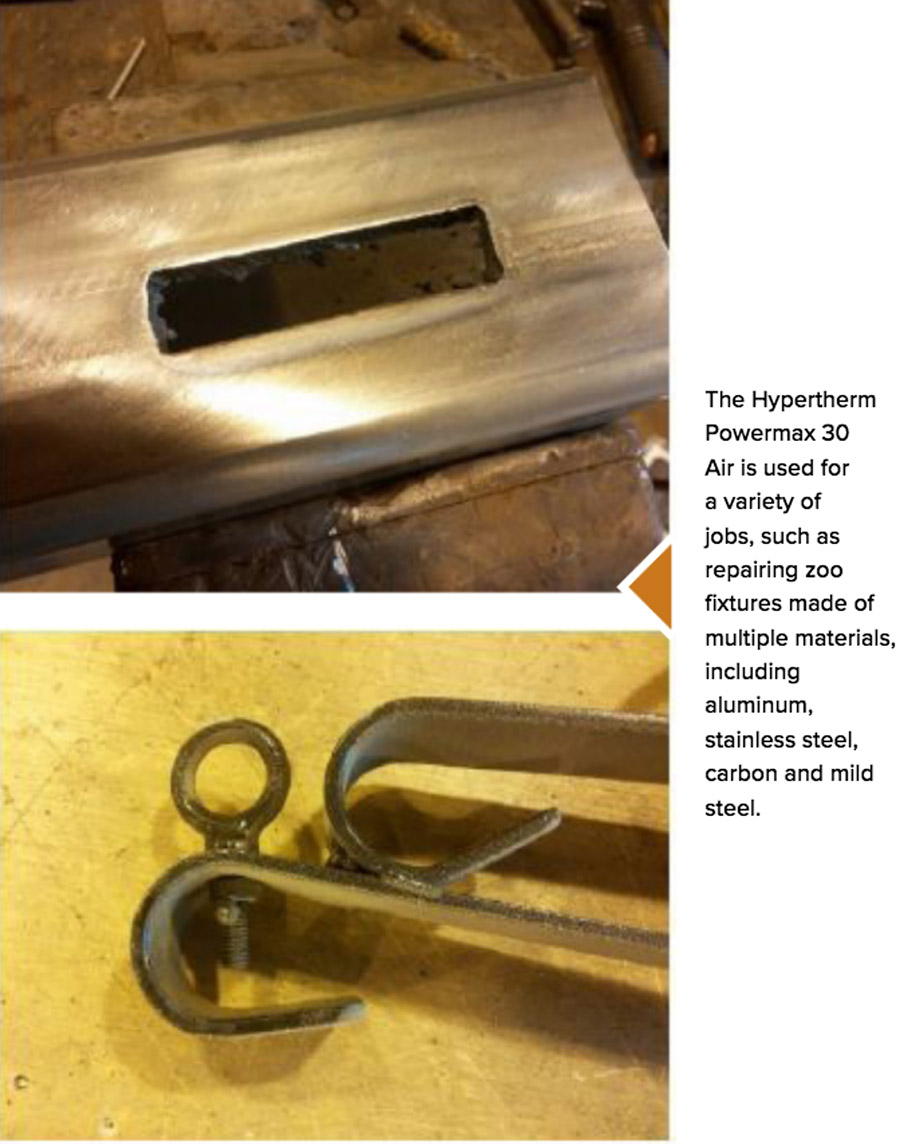