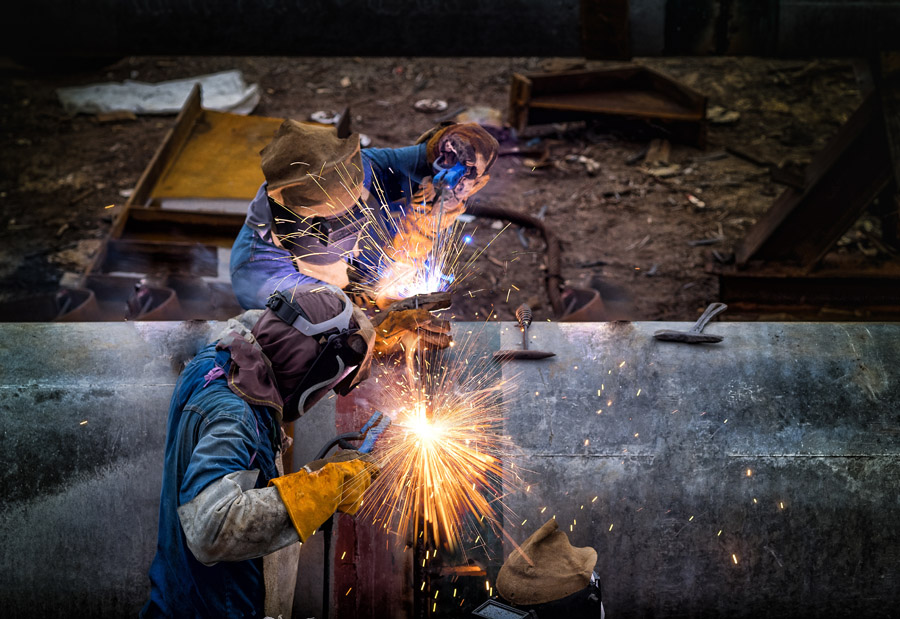 The U.S. network of energy pipelines is the largest in the world with more than 2.7 million miles of pipe zigzagging across the nation. The process of welding those long stretches is a phenomenal sight to see – piecing together massive sections of pipe requires an assembly line of welders and other workers like no other.

On a typical line, there is a welder on each side of the pipe working in tandem to complete a pass. Depending on the thickness of the pipe, a joint could take up to 10 passes to be completed. The number of passes dictates the number of welders on the job as each welder always performs the same pass: When a first pass welder is done with their pass, they move down the line to lay down the first pass on the next joint and so on and so forth. 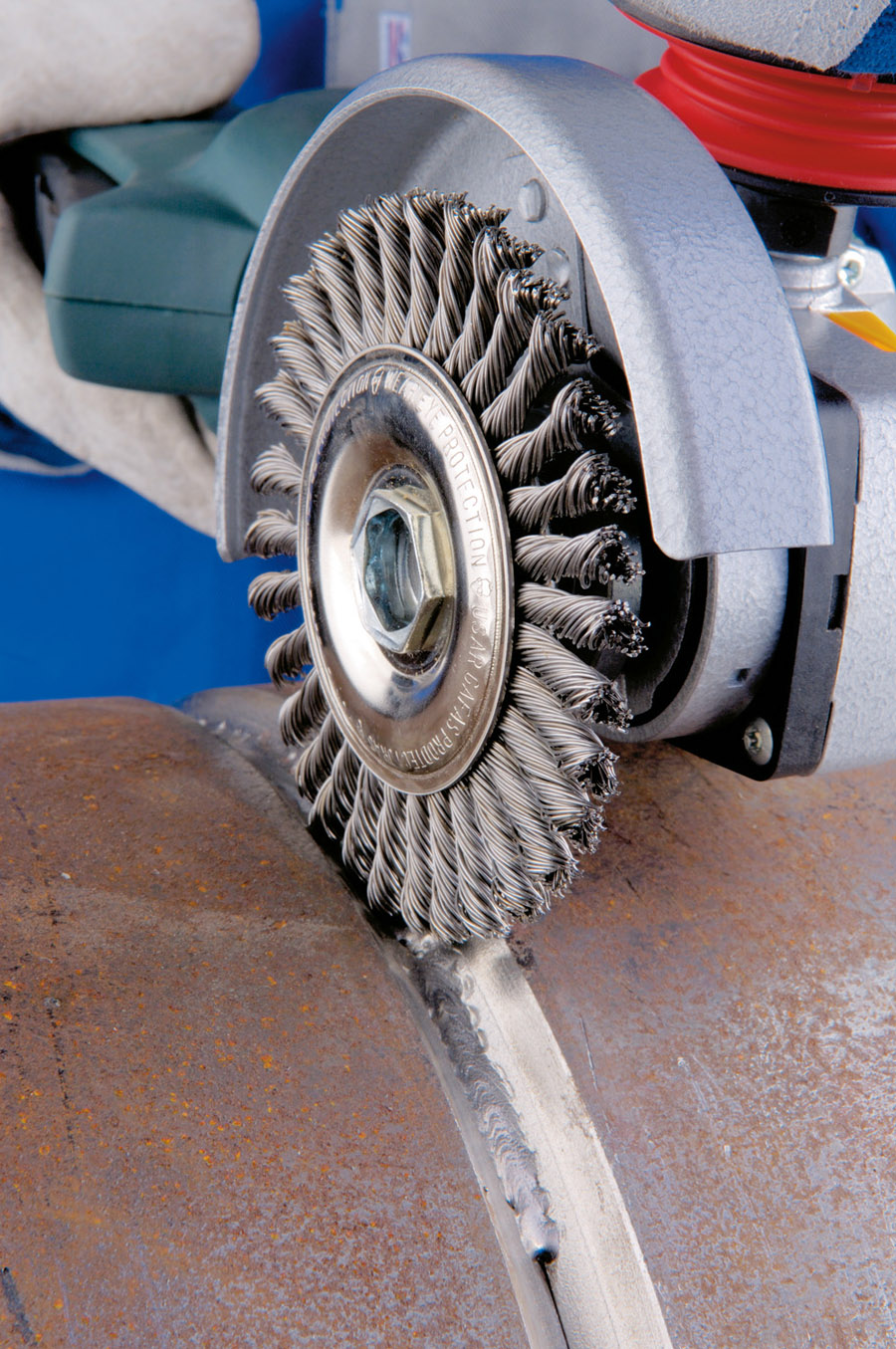 During the first pass, or root pass, the goal is to lay down the weld in such a way that it is flat on top. More often than not, however, the root pass must be followed by a hot pass. Prior to the hot pass, a welder’s helper uses a grinding wheel at a vertical angle to flatten the weld and remove spatter. In doing so, the hot pass welder can be confident that the molten material flows in and solidifies level so that all subsequent passes can do the same.

Once all passes have been made, the final crew on the firing line completes the capping process or cap pass. Once the cap is applied, the welder’s helper removes all slag and spatter from the weld and smooths out any remaining rough edges.

Similar to the number of passes required for each joint, the number of welders and workers on a job depends on a variety of factors, including how the project was bid; the length, diameter and wall thickness of the pipe; and the type of terrain on which it is located. On most job sites, each welder has a helper that handles prep and post-weld work, such as the grinding that’s needed to flatten a weld before the hot pass and the finishing work required during the cap pass.

Undoubtedly, a welder’s helper is an essential laborer on any pipeline project. Whether these helpers are aspiring welders or not, they understand the job that pipeline welders are responsible for and support that work with the same level of experience and professionalism exhibited by the welders themselves.

When it comes to weld prep, the welder’s helper requires a carefully curated collection of tools, including grinding wheels, flap discs, brushes and files. Because of the wide range of brands and styles, each helper’s toolbox may look different from the next.

Regardless of brand loyalty or style preference, bead and cup brushes can be found in almost every welder’s helper’s toolbox. Roche says that before any welding takes place, the bevels that have been cut into the pipe must be cleaned.

During the preliminary process of building a pipeline, the contractor prepares an area for thousands of joints of pipe to be stored, which have been prefabricated with bevels and coating to prevent rust accumulation. On each end of the pipe, a section of the coating is removed prior to arrival on-site to allow the welding process to take place without damaging the coating.

“Typically, pipe is stored in the yards, but because the coating has already been cut back by about 4 in. on every pipe joint, the first order of business is to clean the bevels,” he explains. “Pipe that sat out in the field will be rusty on the bevel, so each night, welder’s helpers take care of that task with a bead or cup brush, which typically takes a couple of minutes.”

Unsurprisingly, the Pferd brand features a large collection of bead and cup brushes that are well suited for cleaning beveled edges, among other jobs. These include Pferd’s standard twist and CombiTwist cup brushes. The standard cup brush features knots that are twisted approximately 75 percent of the trim length, which allow the brush to cover a larger surface area. They are ideal for heavy-duty cleaning and surface conditioning on uneven surfaces. The CombiTwist provides the same aggressive cleaning along with improved balance, reduced vibration and extended service life of the brush.

The company’s stringer bead knot brush wheel has a tight twist for the type of low-flex, high-impact brushing action that’s needed on a pipeline job site. In addition to using it to clean rusty bevels, it’s also a good tool for root and hot pass cleaning tasks thanks to its narrow face width that enables optimal access in hard-to-reach areas.

Similarly, Pferd’s knot cup brushes are specifically designed for cleaning rusty pipe. For hard-to-reach areas, the company’s knot bevel brush is also an indispensable tool for those in the oil and gas industry as it provides an aggressive brushing action. It’s mainly used for deburring, weld scale removal and edge blending of fillets, grooves and inside edges.

In some instances, a pipe bevel might be damaged, requiring on-site correction. In these situations, a welder’s helper uses a pipeline file to smooth out the imperfection. Available with or without handles, depending on the user’s preference, the pipeline files are also designed for root passes and scale removal, so they serve as a multi-use tool.

In other instances, there might be a small burr that needs to be removed from the bevel, which is why a hand brush is also a common tool found in a helper’s toolbox.

Finally, once the welds have been completed, the area of the pipe coating that was cut back prior to welding must be recoated. For this work, Pferd’s pipeline dauber and chip brushes feature natural fiber for painting, gluing and coating applications, such as for the type of coating used on the pipe. Fender brushes are also available with comfort grip handles for general purpose scrubbing and cleaning.

Another essential worker on a pipeline crew is the individual who performs X-ray inspections after a weld is laid down. Considering the critical work required for oil and gas projects, strict welding procedures must be adhered to and, therefore, every weld must be carefully inspected.

“In some instances, an X-ray will show that a weld is insufficient and that it must be repaired,” Roche explains. “In these situations, the welder’s helper has to grind into the old weld down to where the X-ray identified the problem. In the past, they typically would have used a grinding wheel, but that was a hard thing to do because the wheel tries to bounce onto other areas of the pipe. If the wheel bounces off of the weld bead and onto the pipe, it could cause, in some instances, a cutout, which is a much larger expense.”

Roche says that ever since Pferd developed its Polifan Curve flap discs, the job of correcting a defective weld has been much easier. He attributes some of the product’s success to its three working surfaces. While many conventional grinding products typically have only one grinding surface, the Curve flap disc features a top face, bottom face and radial edge surface to get into tight corners or odd curves. It also gives the user a lot more abrasive with which to work.

“Getting into the joint while not damaging the pipe is always a difficult situation for a repair welder,” Roche continues. “But, the Polifan Curve flap disc goes in smooth and doesn’t bounce. The process involves cleaning out the weld until you find the defective area. Thanks to its preset width, the groove is perfect for placing the rod into the joint for the repair. It’s that simple.”

On pipeline projects where Curve flap discs have been deployed, welders and their helpers have experienced reduced labor time and economic efficiency because of their extremely aggressive stock removal rate. Long product life has also been a major contributing factor to its economic benefits.

Considering the amount of grinding wheels, flap discs, brushes and files on the market, the job of a purchasing manager for a pipeline project isn’t necessarily an easy one. Every welder and welder’s helper has a preference for which tools should be in their toolbox.

“The purchasing people on a project have a tough job,” Roche explains. “They have to buy the product that lasts the longest or has the best reputation, but what they end up buying also depends on the welder’s feedback. That’s why it’s important for Pferd to be out in the field to get that feedback to be able to recommend products that will help make everyone’s job easier.”

Roche has been visiting pipeline projects all over the world for the bulk of his career – 12 years with Pferd and 50 years in total. His goal is to provide customers with solutions rather than just providing a product.

“No matter where I am in the world, everyone is performing similar work and expecting similar outcomes,” he says. “Each welder, however, has their own preference in terms of how to get the job done. So even though there’s no common best practice, the spectrum of products to choose from is big enough that everyone can use what they think makes them most effective in their jobs.”