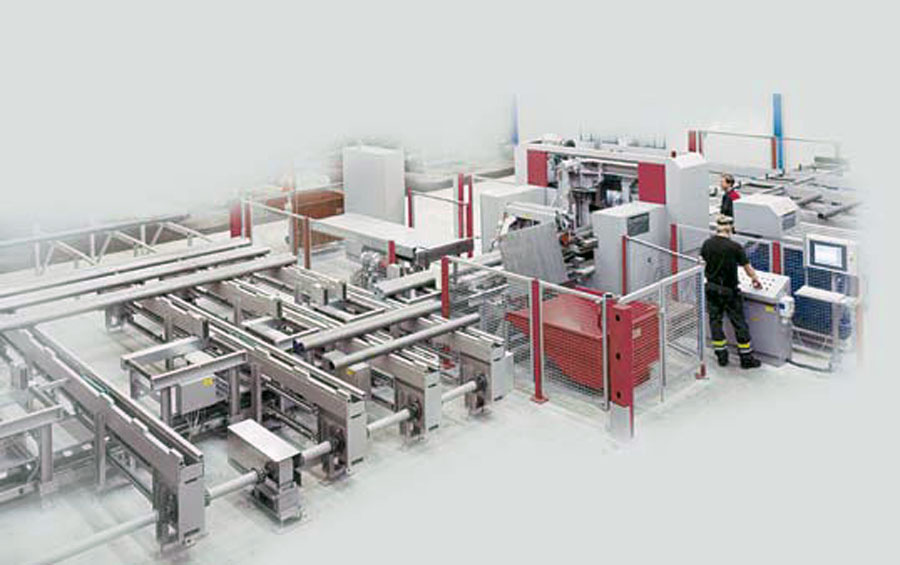 Writing a roundup of nesting programs is like herding cats: They may look a lot alike, but each one has a mind of its own. Still, as we questioned the experts at a variety of companies that produce nesting software, both machine OEMs who offer it as support software for their machines, and independent software companies for whom it’s a major product, it became clear that there are two general goals, or directions, in which they’re developing their nesting offerings. One is toward improving the quality of nests themselves. Bystronic’s cloud-based ByOptimizer, which we wrote about last month is an extreme example.

The other set of goals could be called improved “integration.” This overused term has a fairly defined meaning in this case, referring primarily to streamlining the connection to CAD programs at the input end, and to controlling the machine tool at the output end, connecting to CAM or directly to CNC software.

We don’t want to diminish the value of features within the programs, such as 2-1/2 axis control for cutting bevels, or simplifying post-processing to more easily run a variety of machines, but the two basic goals clarify what practically all software producers are striving to accomplish. In both cases, a primary objective is to reduce the amount of labor that goes into organizing the work of the cutting machine, speeding the end-to-end process of moving as quickly as possible from getting an order to shipping finished parts.

The companies we talked with all are developing better nesting efficiency, up- and downstream integration, and features that add versatility or performance to their programs. We selected certain ones to make one point or another, because they’re good examples, not because that’s all they do. And every fabricator knows that there are many companies that make nesting software than our representative examples. 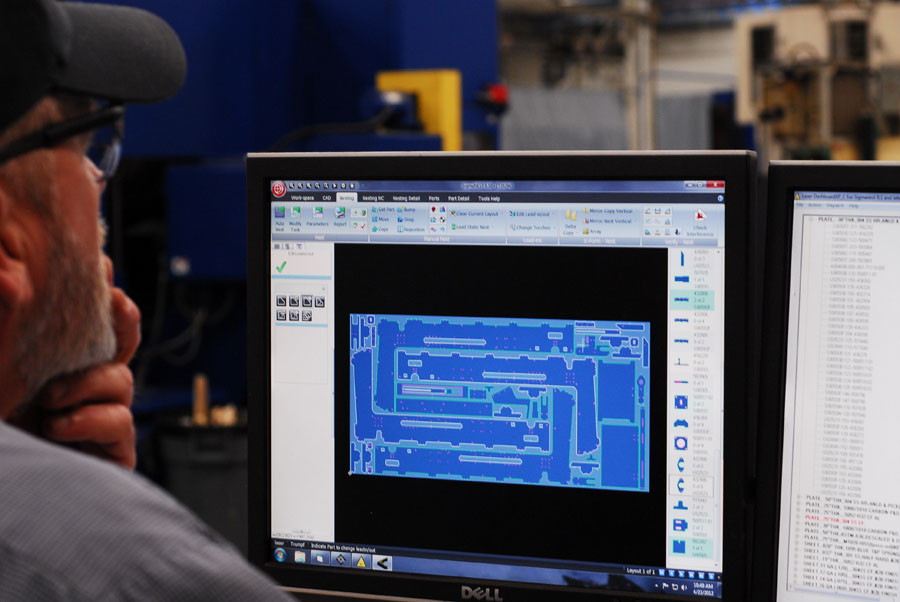 “The best way to judge nesting is by how many clicks I need to create a nest,” says Anupam (“Andy”) Chakraborty, VP of Metamation, Inc. Metamation makes many kinds of software for fabricators, and their nesting program runs all kinds and all brands of machines. A key for them is programs that pull together the design, nesting, outputs, and connections with ERP. So the integration part is a major goal, and Andy’s “how many clicks does it take” characterization is about as clearly as one can define the desired result. Simplifying and automating the steps lead to faster results.

Closely related is the company’s objective of simplifying the user’s interactions with the software. “Our MetaCAM software is the same CAD/CAM environment for 2D, for 3D, and for nesting,” says Andy. “Whether you’re programming for a punch press, a laser, a waterjet, or whatever, you’re working with the same program and the same interface. And that helps make the whole system more stable.”

SigmaTEK is another company that makes a design-to-finished part integrated software solution, and their nesting component is capable of driving practically any sheet and plate cutting machine. The company’s nesting program, SigmaNEST, is integrated with software components that can generate quotes based on known variables such as machine run time, material cost, combined work orders, and so on. “This flexibility allows SigmaNEST users, from the smallest job shop to large OEMs, to create an efficient shop floor,” says the company.

“Adding our SimTrans (Online Data Transaction Manager) bridges SigmaNEST with MRP/ERP, for a higher level of automation.” When the front-to-back processes are highly automated and quick, they beg for a big idea that explains the big benefit. “Just-in-Time nesting” is SigmaTEK’s concept. And the consequence of it, they say, is reductions in the need for metal stock.

Another company that sells nesting software for a wide variety of machine types and brands is Hypertherm. They’re in a somewhat different position, because they also make hardware for several cutting processes. And so they do a lot of software testing and development on their own hardware.

Derek Weston, the company’s product marketing manager for CAD/CAM software, tells what is driving their nesting product development: “We, like most companies, follow the market needs.” Hypertherm makes cutting heads and other components, which their customers – machine tool OEMs – build into their machines. So, says Weston, “We look at what they desire, in terms of the machines they want to develop. If every OEM that we talked to said ‘You know, we really feel there’s a need for a bevel laser and we need you to support that,’ we would work them to do it. If the market for beveled 2D parts, or for 3D parts, developed into something big, we have the capability to go with that market.”

Without putting words in their mouths, FAB Shop’s opinion is that Hypertherm is more feature-oriented. In recent years, they’ve been bearing down hard on using what they know to make attractive software products. They know what it takes to cut bevels with a plasma cutter, for example; they do it already. They know what fabricators want their machines to do; they make the components that do it. So, in their product descriptions (they offer several levels of nesting software), there is an obvious focus on dealing with one practical problem after another, and Hypertherm works on automating those steps in programming and setup. Like all other major companies in the business, however, the bottom line is speeding up the time it takes to set up and run a cutting machine. 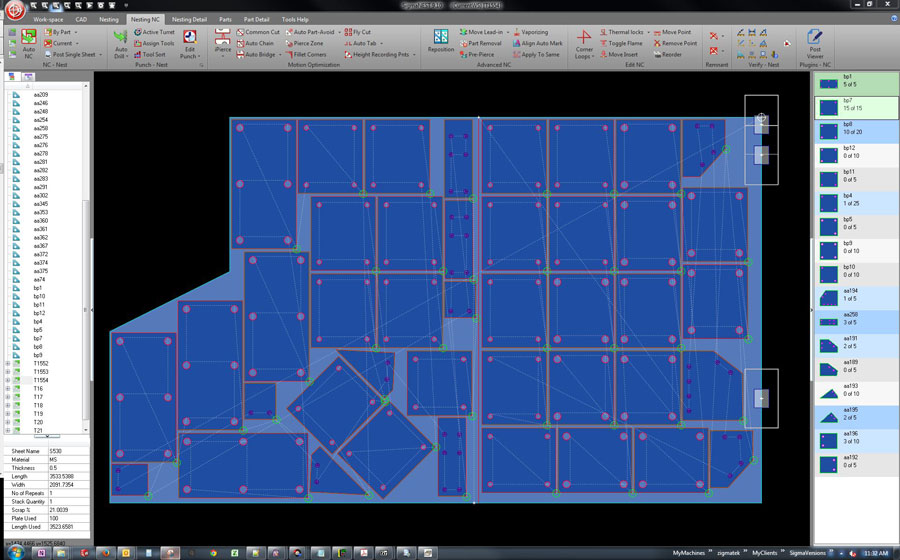 OEMs and their software

When we looked at nesting programs offered by the machine tool OEMs, our first thought was that they have a much easier job. They only have to work with one brand of machines – their own.

But that, it turns out, is a double-edged sword. Many, if not most, fabricators have cutting machines from two or more manufacturers. They’re likely to go with a SigmaTEK, Metamation, or other multi-machine software company in order to avoid having to train their operators on multiple brands of software.

For the OEMs, that means they have to steer in two directions. First, if they’re selling, say, lasers and press brakes to the same customer, they need a high level of integration across their machine types to make their package attractive. For example, bending allowances, “unfolding” features, and other features needed to make a smooth handoff from cutting to bending.

Second, they have to keep an eye on the third-party software that many of their customers want for cross-brand flexibility. The OEM has to make that a smooth, bug-free integration at its end.

Without detailing long lists of competitive features, the bird’s eye view of their direction is toward offering features that can keep up with those of the broader software companies, while making it easy to use those other companies’ software.

“I’ve worked on both ends, OEMs and software companies,” says Matt Garbarino, marketing manager for Cincinnati, Inc. “It’s a full-time job for the software companies to keep their processors current. For us on the OEM side, we need good relationships with those companies so we can collaborate on satisfying the customer’s need for smooth integration.”

Cincinnati’s software for fabricators consists of several programs, says Garbarino. Besides nesting, there is unfolding software, which integrates with CAD software to “unfold” a 3D shape; and scheduler software. As noted about OEMs in general, their nesting offerings tend to work tightly with other software to run the downstream machines in the fabricating process – for those who make such machines as well as cutting machines.

Amada has several nesting products, and it’s interesting to hear the points they bring up first. Again, it’s very feature-oriented and pragmatic, dealing with details of the cutting process. “It’s all a rules-based environment today, where the nesting system is more dynamic,” says Mike Zordan, Amada’s GM for software. For example, when deciding whether to nest a long part horizontally or vertically onto the sheet, it takes into account the number and spacing of support slats in the bed. That will determine whether the program needs to incorporate tabs on that part.

“If it rotates it at 90 degrees vertically, there’s chance that it’s not going to be supported by slats, which means we would establish a rule that says, “In the final nest, if the part’s X value is less than 12 in., we need to tab that part.”

“If we tab that part,” says Zordan, “are we going to put in two tabs or three tabs, for instance? There are rules for it. It’s a fully dynamic environment that we’re faced with.”

“Then, it’s a rules-based nesting solution that’s going to nest the geometry to get the best material utilization. After that, it’s going to look at the intelligent rules that we establish for that given situation and apply that logic to the nest, to generate the code in a very efficient, quick manner.” 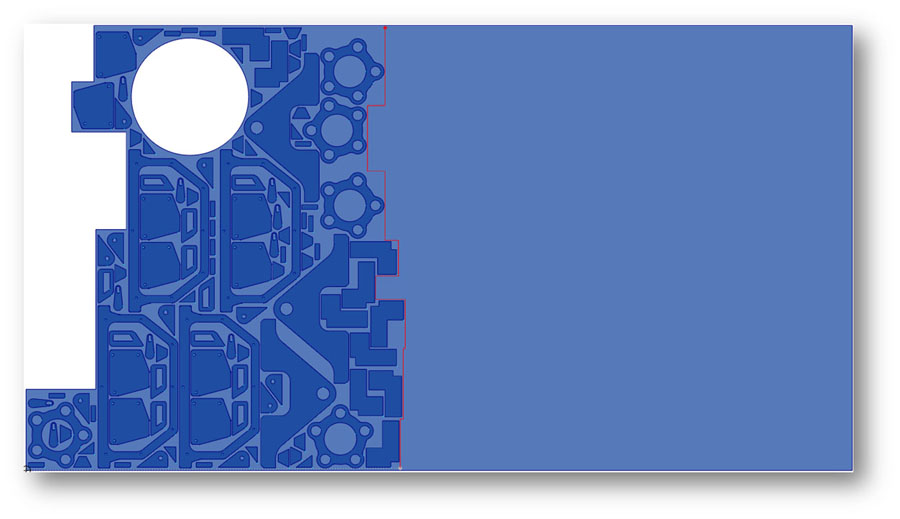 Fierce competition pays off for the user

Nesting software has come a long way, and the basic geometric function of nesting has become such a commodity that there actually are free nesting programs available for download on the Web. If you’re cutting a few profile goose decoys out of foamcore on your waterjet cutter over lunch, they may even do the job for you.

But users of commercial nesting software have benefitted from very fierce competition among the software companies as well as the OEMs. If you’re looking ahead to consider where you’ll go with nesting, these comments from the software makers will give you an idea of where they’re headed, and what we can expect from them in the days to come. Count on ever-improving nests that squeeze every square inch out of a sheet; automated programming of such features as kerf widths and head height; and features that use tables and rules to set many parameters.

As Andy Chakraborty says, one way to judge it is by how many clicks you need to create a nest – or a finished set of parts.