Waterjet technology offers many advantages, but there’s some lack of awareness in the marketplace concerning the technology’s benefits.

Have you tried to explain to someone who’s not in our business how a waterjet works? They start with what they know about water: it sits idly in lakes or pours from the skies, or from our faucets. They can float in it. It is docile. Water is affable. So it’s no surprise that they’re often skeptical when told that we also can use a jet of water to cut metal – a tiny jet of unfamiliar violence. We may offer a demonstration as proof: what nature can do to carve out a canyon in millions of years, we can now do to cut steel plate in minutes.

When they see it, it soon sinks in. And then you can explain that it is now one of the important fabrication technologies, with great versatility and several other unique benefits.

“If you look at all the plate processing machine technologies – laser, plasma, punch, etc. – waterjets are still a small piece of that big pie,” says Jim Fields, TECHNI Waterjet’s National U.S. Sales Manager. “We’re still getting a percentage of those fabricating processes, but they can be inefficient, noisy and hazardous to the environment. Waterjet technology is a real green process. It’s inert, it’s water, it’s sand, and we make the most energy efficient machine out there.”

However, given the potential advantages of waterjet cutting technology over other cutting processes, Fields reports that there’s a certain lack of awareness in the marketplace concerning the technology’s benefits.

“Misinformation is one of the biggest pitfalls,” he notes. “People are misinformed about what waterjets can and cannot do, what their limitations are, how much they cost to run and things like that. That could be what shies people away from looking at it more closely.”

“The waterjet industry is thriving, but it’s not growing as fast as we think it could,” he begins. “It’s definitely growing because more people are getting a better understanding of what an abrasive waterjet can do for them, but the handicap is that unless people see current waterjet cutting technology in action, they’ll still think about the early developments of abrasive waterjets from the late 1980’s.”

Cheung describes the early developments of abrasive waterjets to which he refers: “It was dirty and noisy – the pump was noisy. The cutting was done in air, the particles coming out were at sonic speed, there was a lot of noise created by these mini sonic booms. And the environment where the machine operated would often get extremely dirty, and you would almost have to enclose it in a different room in order to operate it. It wasn’t a precise cutting tool, either.” 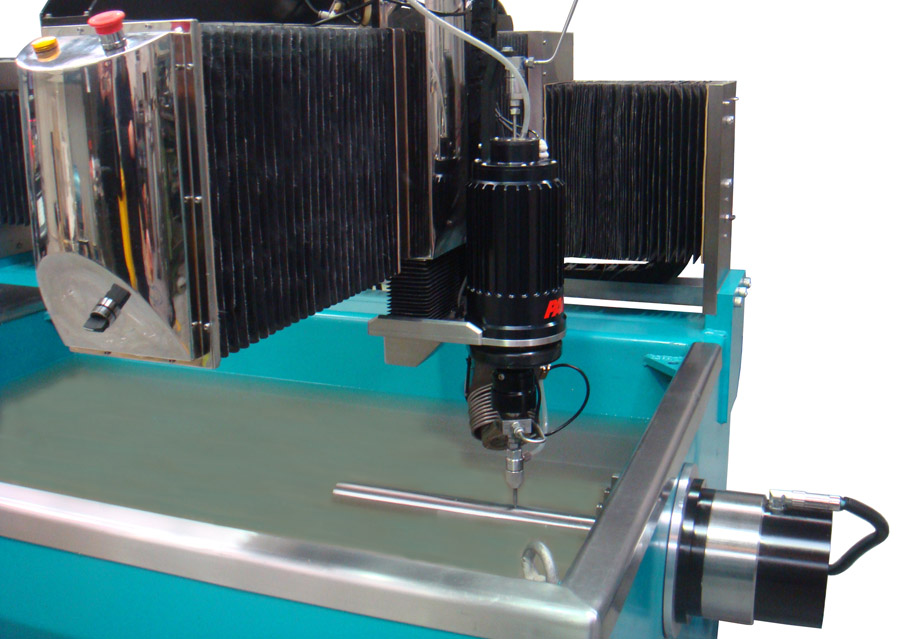 It’s understandable that potential customers might avoid waterjets if this was the picture that they had in mind. However, the technology has evolved considerably since this older generation of machines was on the scene.

“OMAX has a 4th generation direct drive pump that’s very quiet. It’s well below the OSHA required level of 85 dBA in continuous operation – ear protection is not required,” explains Cheung. “We also have water level control which allows operators to submerge the cutting head when they are cutting in order to keep the noise down to the level at which two people can hold a normal conversation while standing next to the machine. Submerged cutting also eliminates the dust and debris for a clean, quieter cutting environment.

“In addition, we have developed software to control the cutting that will give the customer the optimum cutting speed, in addition to the quality of cut that they want for precision parts.” With these advancements over older waterjets, it’s clear that the technology is indeed viable in the shop. But the awareness issue is still a problem.

“People have to see the technology,” says Sandra McLain, OMAX’s Vice President of Marketing. “That’s why we exhibit in so many tradeshows. They read articles or they hear about it, but they have to see it for themselves to believe.” Cheung adds, “About ten to fifteen years ago, in the U.S., when we would go to a trade show, people would walk by our machine and ask, ‘What are you doing? Is this a chemical etching process or something?’ And now, in the last five to ten years, domestically, people aren’t asking that question – they know it’s a waterjet. But, then, internationally, that question is still there in many cases. As an industry, we need to let people know what we can do.”

Another issue that the waterjet industry faces is integrating increased material handling capabilities into the technology. 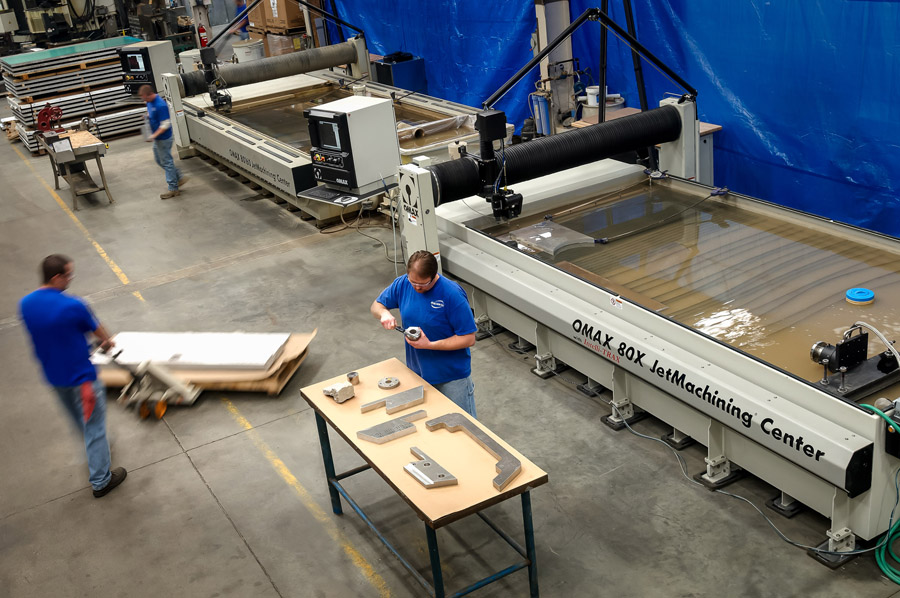 Fields says that integrating increased material handling capabilities into waterjets is the next frontier for the industry.

“That’s the last frontier for us,” says Fields. “That’s the area that we need to develop in order to be more competitive with the laser systems that have automated handling.” Fields elaborates that the abrasive waterjet environment has historically not been as conducive to material handling, and because of the cycle times of the technology, it hasn’t been on the forefront of waterjet research and development. “We’re addressing every other avenue, but that’s one we could do better at, and that’s the industry as a whole,” he says.

“People are concerned about reliability when it comes to waterjets, and I think the industry needs to introduce products that are more and more reliable, with less and less maintenance,” he begins. “I might be the lone voice out there, but I’m concerned that when the industry does things like introduce pumps at much higher pressure, it actually adds to the maintenance of the machine.

Cheung notes that waterjets are highly reliable when the pressure is up to about 60,000 psi. “In the last few years, we’ve seen waterjets being pushed to much higher pressure, say 90,000 psi, and that causes a lot of metal fatigue, and, as a result, the equipment is getting less reliable because of that push.“Of course, people can say, ‘Well, if you don’t like that, you can drop the pressure,’ but the customer is already paying you for that higher pressure equipment, and if you ask him to lower the pressure, he gets less efficiency, and then he has a bad taste in his mouth.

“I think, in the future, the challenge for the industry is to make the equipment easier to use, and that includes less maintenance.” Based on these things, it’s clear that the waterjet cutting industry has a number of challenges to face in the coming years. However, that’s also true of any industry in the manufacturing marketplace, and companies like OMAX and TECHNI Waterjet are optimistic for the future of waterjets. “As far as how the industry is doing, I’d say we’re cautiously optimistic at this point,” says Fields. “And ‘cautiously optimistic’ has more to do with the government, the economy and factors outside our control that could affect all of fabrication. We’re definitely feeling growth and a steady increase in inquiries, so it’s going well. The industry is becoming more mainstream than it has been in the past.”