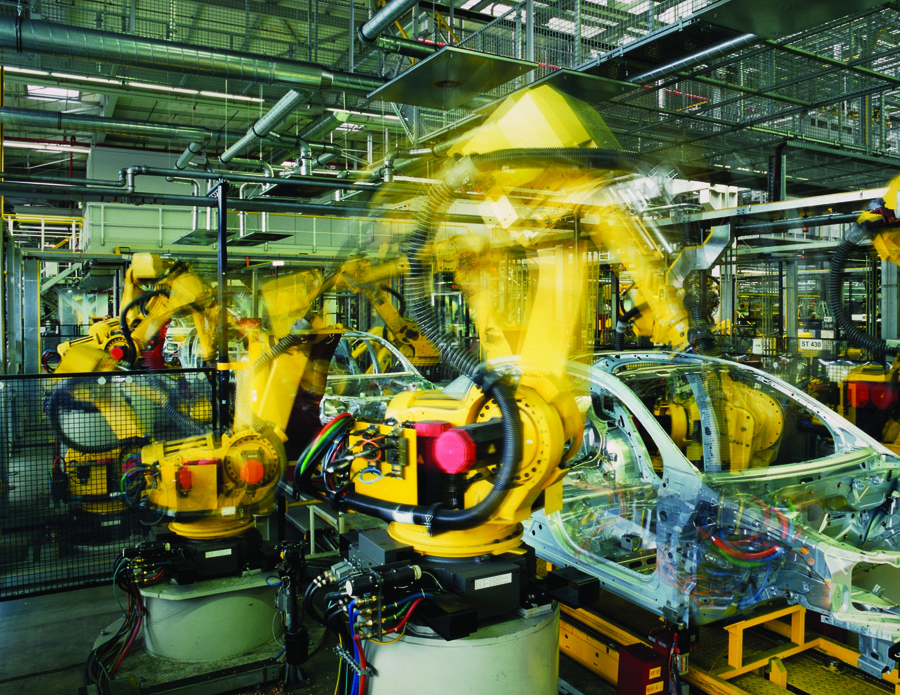 For years, the auto industry has challenged metallurgists and other material scientists to come up with lighter, stronger steels for use in automobiles. And time and time again, they have risen to the occasion, providing automotive designers with remarkable new high-strength steels for engineering lighter auto bodies that still deliver the strength required for safety and structural integrity. 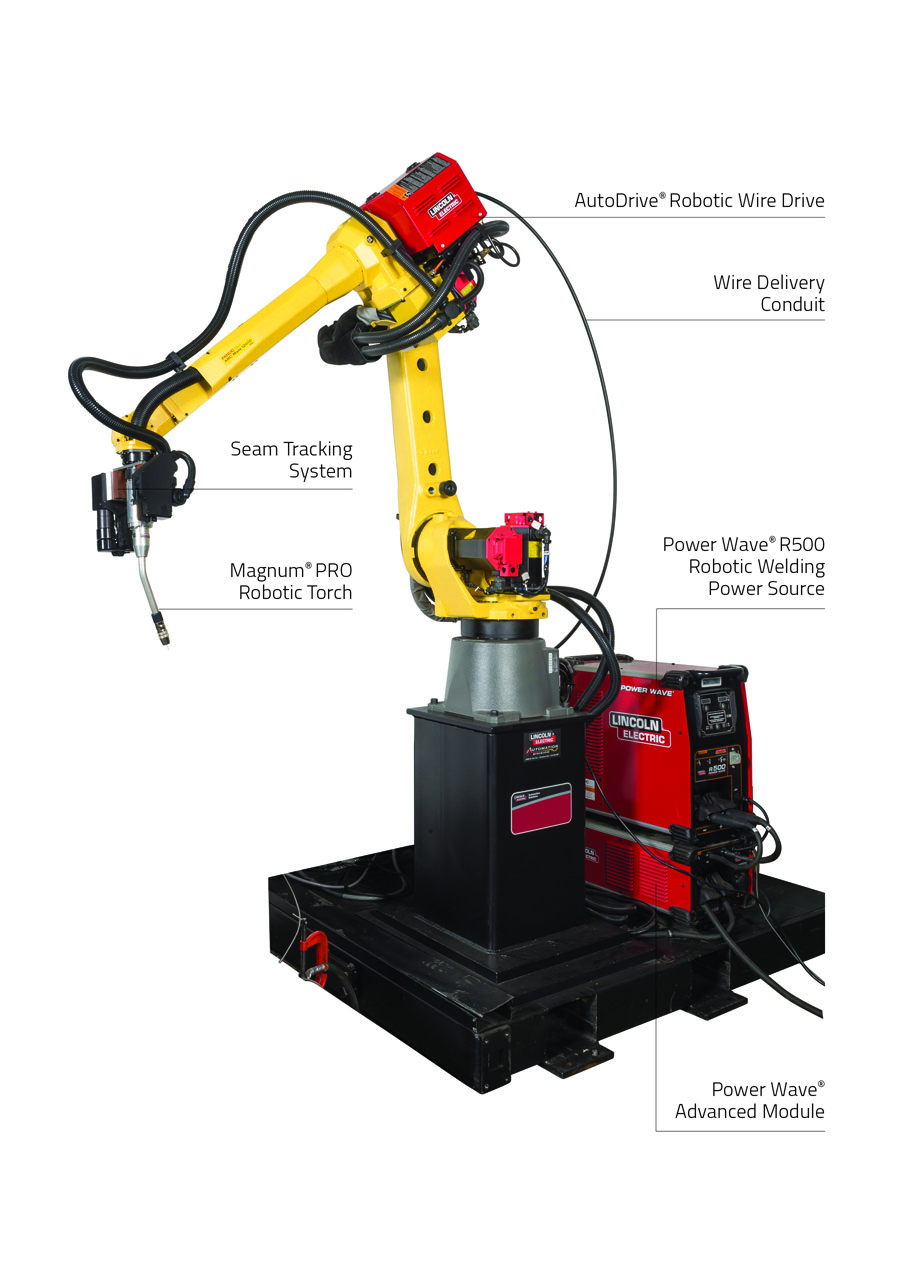 Process Z makes a compact package – robot and torch, and a welding unit with advanced digital control and software.

But in the process, the challenge has been moved on down the line. Tier 1 and Tier 2 suppliers of chassis and body parts in particular have found themselves having to develop new ways to work with newer versions of old, familiar materials – such as hot stamped steel, with its strength coming as much from heat treating as from the alloys being used. To meet the challenge of fabricating, forming and joining these often difficult-to-work-with materials, the industry has turned for support to its equipment manufacturers, opening the door for some highly creative solutions.

What’s the rush?
The need for both lighter-weight materials and improved safety drives this evolution in steel strengths. On one hand, the U.S. government’s CAFE standards are ratcheting up requirements for better corporate average fuel economy. In a parallel push, European standards target lower CO2 emissions. From now through 2025, automakers are doing everything they can to improve fuel economy as they work to meet a fairly large federally mandated increase in the fleet average fuel economy. They’re looking at many different aspects of vehicle construction and operation, of course, but one of the big focuses is on reducing vehicle weight, or “lightweighting.”

At the same time, crash safety standards continue to tighten substantially. That makes the crash performance of lighter vehicles a significant driving force in vehicle design. As steels get thinner in pursuit of lighter vehicle weight, they also have to get stronger to be able to ensure equivalent performance. In addition, as material thickness decreases, dealing with corrosion becomes a more significant challenge. We’ll deal with that issue later in this article.

The steel industry has responded enthusiastically to the opportunity to develop better, lighter, stronger steels and to the threat of alternative materials. The Auto/Steel Partnership, formed in 1987 by several steel producers and the Detroit Three automakers, has aggressively answered a number of the technical challenges associated with higher-strength and lighter-weight steel. This concerted effort by the steel industry and the automakers to find solutions has led to an ever growing list of higher- strength steels being used in vehicle body structures and also in chassis components. 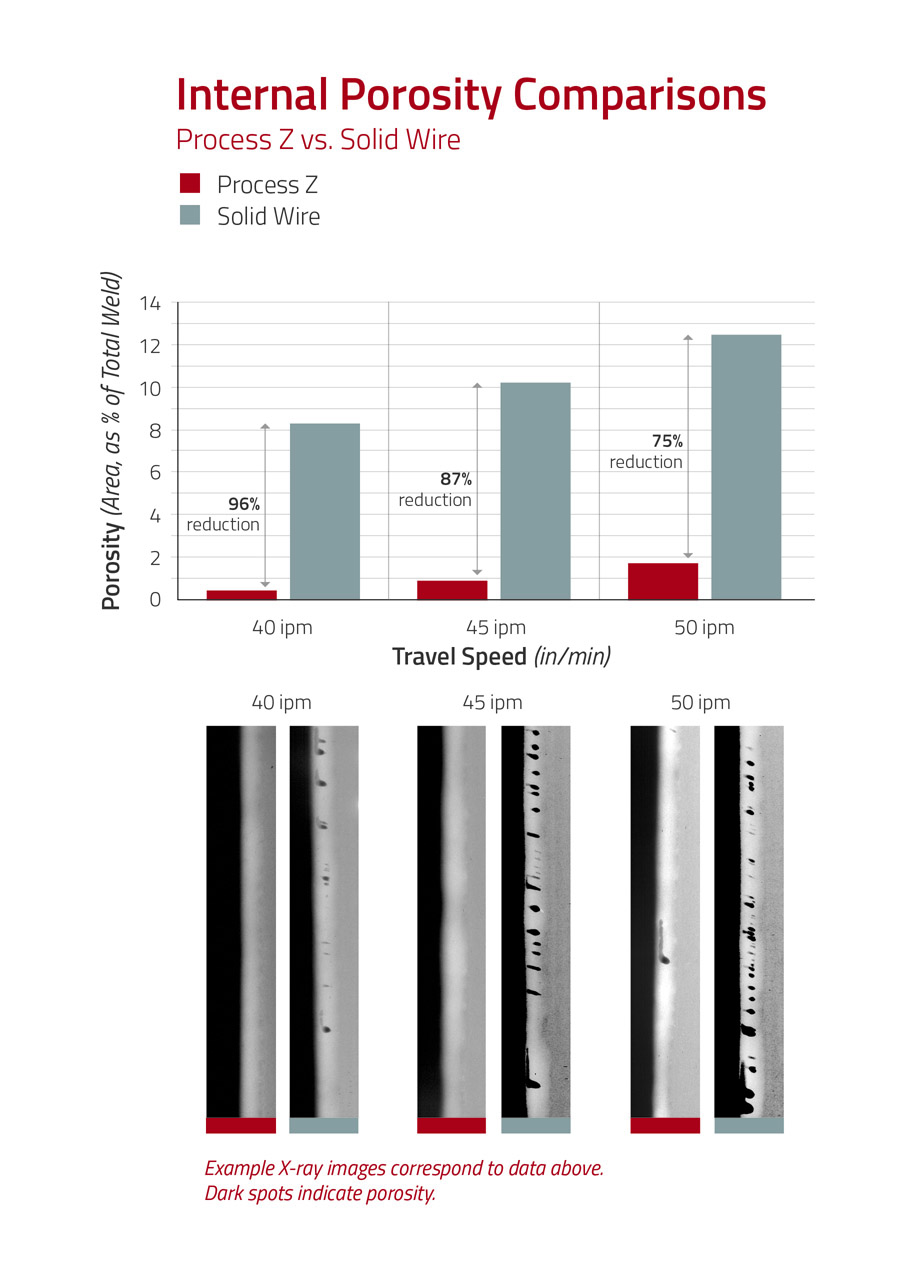 Some newer vehicles are 95 percent high-strength steel of some type, others are less so, but all are mixed. Many new vehicles have aluminum body panels or aluminum castings in the suspension, and the mixture of high-strength steel of various strengths with aluminum is very common in today’s vehicles. Here at Lincoln Electric, we have been watching this increasing use of high- and mixed-strength materials with a particular interest in what it now takes to join these materials. And the answer requires a mix of solutions. 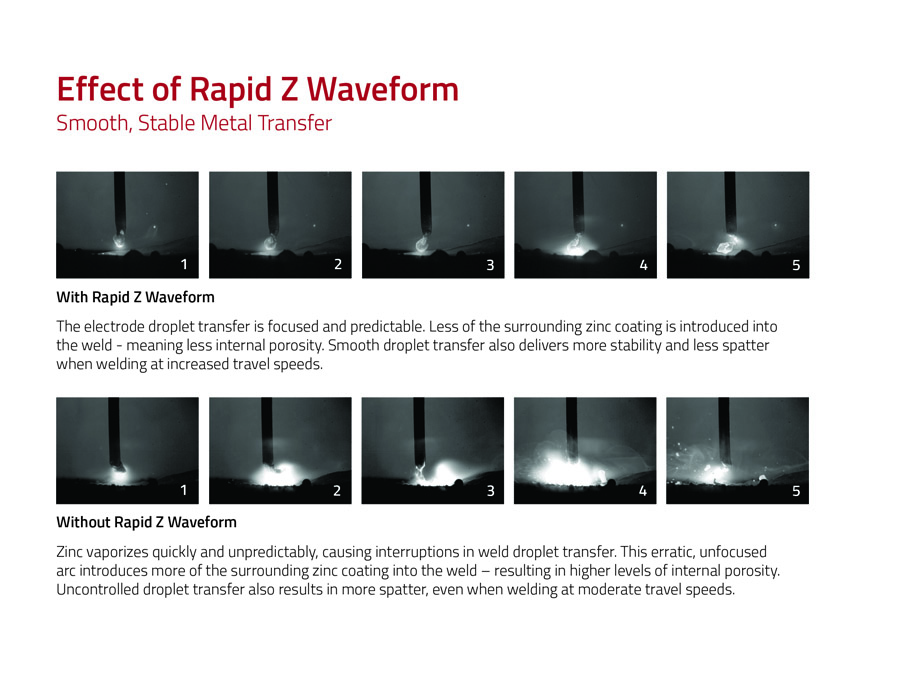 An important aspect of these high- strength steels is the relationship between their tensile strength and their elongation properties. Essentially, the stronger a steel is, the less ductile it is. Many proprietary steel designs have been developed attempting to obtain an optimum mix of strength and ductility, which brings another factor into play.

Almost all of the higher-strength steels gain as much, or more, of their strength from hot forming or heat treating than they do from their alloy content. That creates a real joining challenge. Until recently, most of these steels have been arc welded, or spot welded, with fairly conventional processes. However, welding these steels can easily compromise the heat treatment in the area called the heat-affected zone, causing a reduction of strength in that area. There’s no straightforward answer to this problem, but beyond a certain strength range, traditional arc welding and mild steel wires are not necessarily the right answer any longer.

Furthermore, although the strength of the material is up, the fatigue performance of welded joints doesn’t improve with strength. And that’s an area of continuing interest and concern to the Auto/Steel Partnership.

Working within limits
These realities challenge automotive designers to find a way that reduction in strength is not detrimental to the component performance. They also challenge welding equipment manufacturers to develop ways to minimize or eliminate the adverse effects of welding.

Here’s where the corrosion resistance issue has come into play. Zinc surface coatings are increasingly being added as the thickness of the material used in forming parts decreases. Thinner parts have less tolerance to corrosion damage. However, arc welding zinc coated steel – whether galvanized or galvannealed – has always been a huge challenge. The zinc coating evaporates at a much lower temperature than the weld metal, so as the metal melts in the process of being welded together, the zinc runs into the weld pool.

This creates all kinds of havoc, including both external and internal weld porosity. These effects can be partly controlled by welding more slowly, but it also results in an unrealistically low production level. And in the automotive industry, that’s an unacceptable solution.

As the use of zinc coating has spread to higher-strength steels in more strength-critical applications, this has become a much more critical issue. A recent example is one rear engine cradle that previously was mild steel. When the OEMs decided to make it from high-strength steel for newer model vehicles, it threw the tier supplier for a loop. Naturally the OEMs were expecting the same production performance and part cost, but the tier supplier discovered they couldn’t easily weld it without porosity or at the speed they had previously used.

Fortunately, Lincoln Electric has developed a process that basically solves both porosity and production speed problems. It uses a combination of a specialized metal-core welding wire and a proprietary patent-pending welding waveform to eliminate external porosity and nearly all internal porosity at welding speeds comparable to welding on bare steel.

Called Process Z™, it is implemented through an Advanced-Process Module™ and an AC waveform we call Rapid Z™, that works with third-generation Power Wave® series machines. Using an AC waveform enables part of the waveform to be used to heat the wire and not the zinc. The negative part of the cycle heats the wire efficiently, minimizing the heating of the zinc, while the positive part of the waveform transfers the droplet with a minimum amount of base metal heating. It also prevents “wandering” of the arc, which would otherwise reduce efficiency and also increase spatter. The net effect is that less heat gets into the weld, which has multiple benefits: it produces a more reliable weld in thin steel, and the zinc keeps from getting too hot. But there is still enough penetration to make a solid weld.

This type of software solution is likely to become increasingly important as automobiles grow in their metallurgical complexity and sophistication. As automakers continue to push the envelope, system solutions like Process Z will play a key role in bringing new advanced technology vehicles to market.