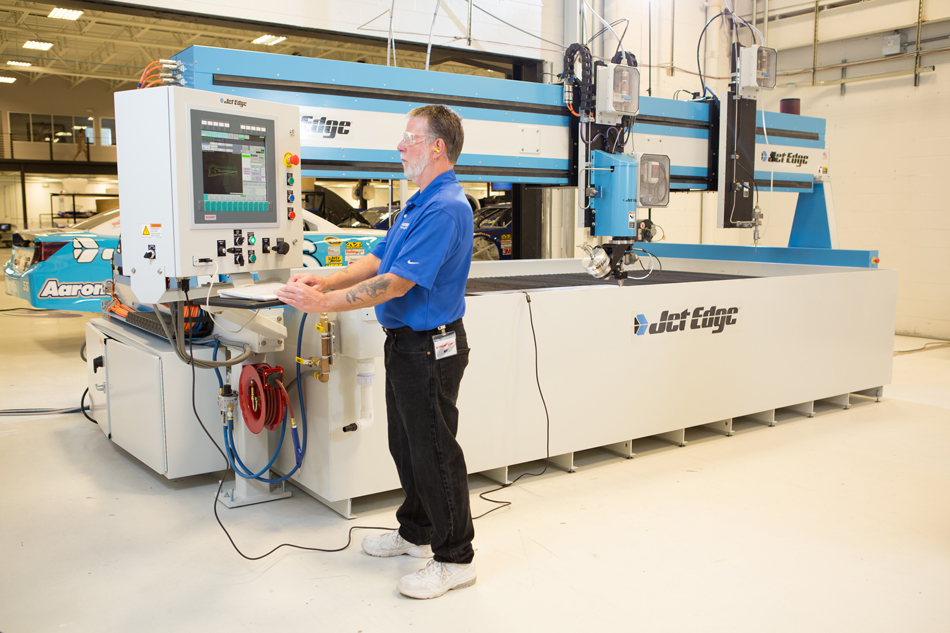 The latest in waterjet innovation can probably be summarized as increased precision and accuracy. These are not unexpected things, but they’re always good. How the builders are accomplishing it is more interesting… Companies like Jet Edge, OMAX and TECHNI have all released new waterjet products that, in one way or another, help the customer to achieve increased accuracy and precision in their cutting, from new laser sensors to waterjets designed for better stability; they’re rock-steady machines.

“Around the end of last year, we released a new laser-based tracking device that allows us to basically scan a plate and create a topographical map of the surface and adjust for inaccuracies in that surface in a five-axis setting,” says Jeff Schibley, Regional Manager for Jet Edge. “It’s a combination of hardware and software. You have a scanner device that you affix to the axes of our five-axis waterjet. You lay your plate in the waterjet cutter, and it scans the plate, creating a topographical map of the plate that you have in place, based upon the grid sampling that you designate it to do.”

He gives the example of a 4 ft. by 8 ft. plate.
“Let’s say you tell it you want it sampled on the 3 in. x 3 in. grid,” Schibley explains. “It would go out there, and the sensor will take a reading as it traverses across the X-axis every 3 in. It’ll index up in the Y-axis 3 in., and come back and scan again, and up and scan again and up until it basically creates a topographical surface map of that plate you’ve placed in the work envelope.”

The benefit of this system, he says, is that it allows the operator to accurately execute their program, given that they know where their plate is within the work envelope using the topographical map. This is important because five-axis cutting is a much more delicate process than two-axis cutting.
“When you look at the geometry of most five-axis heads on the market, including ours, you have a B-axis that is at 45 degrees to the A-axis, and that allows us to set our angles, and then we utilize the C-axis, which is centered around the XYZ-axis, to rotate our B,” elaborates Schibley. “The intersection of those two points is critical to creating accurate bevels, taper compensation and all of those things, and if I vary that, I could drastically change the tolerance of that part.”

Thus, the key aim of Jet Edge’s laser scanner device is to increase accuracy in five-axis cutting, and it does so by using the topographical map that Schibley described. “It’s been an education, to be honest with you,” he says. “I think that the entire industry and our competitors have come out with their five-axis heads and their taper control heads and all these things, but I don’t think that most customers really understand how you can create a less accurate part rather than a more accurate part, when you begin angling that head to take out taper, and apply it improperly — and if that plate’s not flat like you think it is.”

OMAX
OMAX has three new products that have been introduced in the last year. The first is a micromachining waterjet called the MicroMAX, first unveiled late last year at MD&M in Chicago.

“The MicroMAX is the most precise waterjet currently on the market for small micro-waterjet parts,” says Kristy Wilson, Marketing Communication Specialist for OMAX. “It’s ultra-precise waterjet cutting for electronics, medical and prototyping.” Ultra-precise means that the MicroMAX can machine finished parts and part features in the 300-micron (0.012 in.) range.

The second new product from OMAX is actually a new line of what the company calls jet machining centers, newly redesigned, and all branded under the MAXIEM name. The MAXIEM jet machining centers include the 0707, 1515, 1530, 2030 and 2040 models, and were introduced this past April. These new waterjets are intended as cost-effective, high performance and all-purpose machines. “We went through and gave the line a whole redesign, a whole new update,” says Wilson. “The new MAXIEM models are basically built as core machines that are easily customizable with accessories that can be changed out as a company’s needs grow, like plug-and-play cutting heads – it’s very easy to update your accessories.”

It should be noted that these new models are new machines, different from OMAX’s previous MAXIEM jet cutting centers.

“The thing that makes MAXIEM unique is that it’s not integrated. It’s built,” she says. “The pumps, the cutting heads, the tables, the drive systems – everything is built as a single unit under one factory, and before a machine is shipped or goes out the door, everything is thoroughly tested as a complete and single unit. It actually gets tested as a complete single unit, and has to meet certain standard criteria before we crate it and put it on a truck.
“This is unique. With a lot of other companies, the pumps come from one place, the tables come from another – the components come from scattered factories, even if it’s the same company. Our waterjet is actually a complete, thoroughly tested unit before it leaves our door.”

The final product from OMAX introduced in the past year is the company’s new iteration of their Intelli-CAM software, released last fall and officially announced at FABTECH 2013.

“The kind of exciting thing about the Intelli-CAM software is that it’s a 3D CAM software that opens and reads the most commonly used 3D rendered files,” comments Wilson. “It’ll open and read your files and then it will automatically pick your cutting path. It’s very easy; you open your file in Intelli-CAM, you pick your cutting phase, you hit ‘machine’ and then ‘export’ and you’re ready to start cutting.” Files that can be read on Intelli-CAM include Autodesk, Inventor, Siemens NX, Pro/E, Creo, CATIA, SolidWorks and more.

TECHNI
Introduced last year, TECHNI Waterjet’s Techjet-X3 4100 gantry-style waterjet is the company’s flagship machine, in the view of Jim Fields, National Sales Manager. It’s unique in that its cutting table is nearly the size of the entire waterjet itself.
“All of our R&D will be built around what we can add to this platform, I think,” says Fields.

Fields goes on to explain how the TJ-X3 4100 is different from other waterjets on the market, saying that the machine is open in the front for loading and accessibility, and the gantry style makes it more rigid. It’s also mounted to the ground – the motion equipment is anchored. Most of the equipment is independent of the tank, as well. “Typically, most equipment is mounted or built around the tank,” he says. “That’s pretty standard in the waterjet industry.”
With its increased rigidity, the TJ-X3 4100 also offers higher longevity and precision to within 0.001 in. In addition, the platform boasts faster speed – up to 700 in. per minute.

“We’re able to actually handle that motion,” says Fields. “A lot of times when you look at a competitive product, the structure of their machine doesn’t allow them to cut as fast as the process will cut. This platform allows us process further while not compromising the base or the platform of the machine.”
The platform was also designed to make use of a beveling head on a full 6 ft. by 12 ft. work envelope. As a result of all these things, Fields says that customer response has been very positive.

“It’s been a very popular machine,” he says. “I would say that about 60 to 70 percent of the machines that we’re quoting are this model. People expect quality from us, and this machine is no exception.”