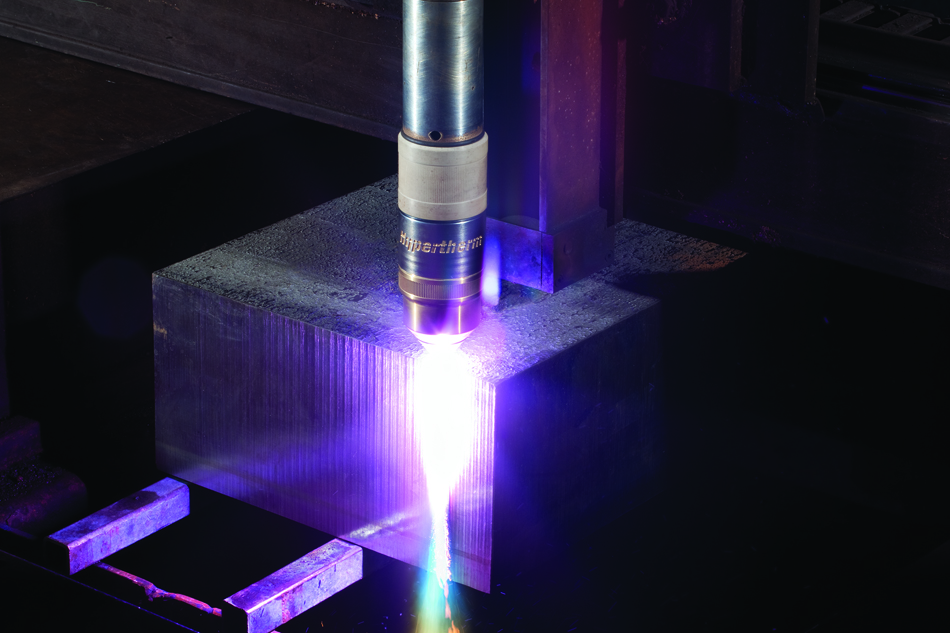 In plasma cutting, it’s about watts — power. In arc welding, whether stick, MIG, TIG, or whatever, it’s about amps — current. We’re accustomed to think of comparative power ratings in arc welding based on the amperage the machine is delivering through the arc.
Plasma cutting is different. In a plasma torch, volts and amps both count. A machine’s cutting rate depends on how many watts (volts times amps) it delivers.
And so amperage comparisons don’t tell the whole story. Hypertherm, whose plasma cutters tend to deliver higher-than-average voltage, has an obvious reason to clear this up, which they do as follows:
Just as some V8 engines get more horsepower to the truck’s wheels than others; some plasma systems provide much more power than others.

• Amperage: A truck’s engine size shows how it can perform. Amperage does the same thing for plasma cutters. But if you only look at the engine, you’re missing out on key areas that yield major performance enhancements.

• Voltage: The RPMs on a truck compare to output voltage on a plasma cutter. The more RPMs, the more power output; the higher output voltage, the faster and cleaner you cut.

• Wattage: Horsepower tells us if a truck has the guts to keep up with our work; so does wattage for plasma cutters. Both show the power output of the machine. Some can only reach a certain output. Some have legendary power.

Determining the output power of your plasma system is simple: multiply the amperage of your system times the number of output volts. If you don’t see the number of volts listed anywhere, ask the manufacturer. Your answer (amps x volts) will equal watts (or kilowatts.) This means it is entirely possible for two systems with the exact same number of amps to have widely differing power levels.