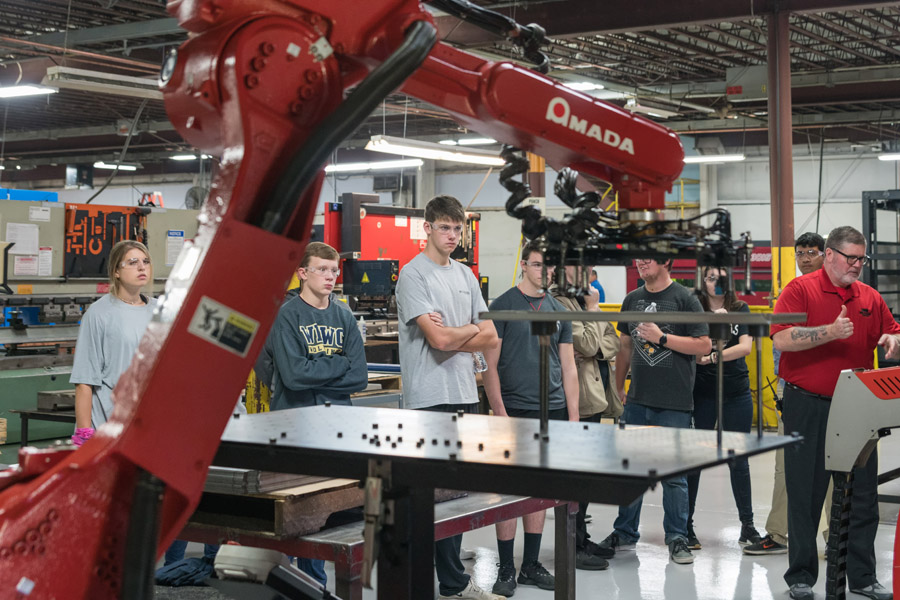 Jerry Ward likes ice cream. He’s been making it since he was a child, when he was tasked with sitting on the lid of the ice cream machine each weekend while his brother cranked the handle. As an adult, he once attended a 10-day course at Penn State’s College of Agricultural Sciences, titled “Ice Cream 101, Introduction to Frozen Desserts.”

Ward later spent $6,000 for a defunct ice cream shop complete with soft-serve machines, dipping cabinets and all the other accoutrements of ice cream making. He’s since perfected his process to the point that he can now make five gallons of Georgia Peach or Almond Joy in just eight minutes.

His favorite flavor? Pralines and Cream.

Fortunately for the employees of Metcam Inc., a precision sheet metal fabrication shop in Alpharetta, Ga., where Ward serves as vice president of operations, his desire to excel at everything has led him to pursue perfection in manufacturing processes rather than becoming the next Eddy’s or Häagen-Dazs. Much of that goal revolves around automation.

“In 1988, I met a guy from Amada Japan,” Ward explains. “He and I shared the same vision of a completely automated shop, one where data is shared between the machine tools, the scheduling and quality systems – everything. Unfortunately, the computers and software at that time couldn’t support it.”

Still, Ward took his best shot. He says he quite literally purchased the first flexible manufacturing system (FMS) available from Amada – serial number three with right-angle shear and integrated material handling. He then “ran it night and day, seven days a week,” at a time when most people were unfamiliar with the terms lights out, nesting and FMS. Lean manufacturing was “that thing they’re doing over in Japan.”

Ward admits he likes to ride the bleeding edge. He graduated high school one year early then served in the Air Force during Vietnam performing flight control systems maintenance on aircraft autopilot systems. He went on from there to support the Apollo moon missions, tracking astronaut flight data while flying in Boeing EC-135 Stratolifters affectionately called Snoopies for their black, nose-mounted, 8-ft.-dia. antennae.

Ward’s transition to manufacturing came when his brother bought the rights to an automatic lawnmower design and needed someone to make frames and other components for him. They opened up a shop and before the first machine tool even arrived, Ward began receiving orders from Scientific Atlanta for sheet metal parts, followed by Bell Labs.

The brothers ditched their lawnmower manufacturing venture in favor of job shop work and were soon up to 170 employees. After accepting a number of government contracts that were later cancelled mid-stream, however, the business was eventually forced to file Chapter 11.

Enter Bruce Hagenau, current president of Metcam. Since 1989, he and Ward have rebuilt the struggling sheet metal business into a working model of Ward’s automated factory vision, servicing the telecom, HVAC, air filtration, and fire and security industries along the way.

“We have a nice mix of low- and high-volume work, but as a rule, we won’t buy a piece of equipment unless it has some type of material handling or other type of automation,” Ward says.

One example is Metcam’s Amada HG 1003 ATC, the company’s 12th Amada press brake but the first with an automatic tool changer, integrated bend sensing, and the ability to store up to 86 ft. of punches and dies. And even though Metcam had to spend nearly $100,000 on new tooling from Wila to fill the machine, the results have more than offset the additional cost.

“Because the HG automatically sets itself up, it’ll have the next job ready faster than we can stage the material,” Ward says. “We can take all these small orders – five, 10, 30 pieces, whatever – and process them one right after the other with zero setup time and zero scrap. It’s not unusual to do 50 different orders in a single shift. And because of the active camera safety system, we can use a less-skilled operator – all they have to do is scan the job’s barcode and follow the prompts on the control.”

Best of all, the programming is also largely automatic. Shortly after receiving the machine, Ward and his team pushed more than 3,000 legacy jobs through the software in two weeks.

“That was a pleasant surprise,” he says. “It flattens everything and figures out the bend allowances, goes through the simulation checks and decides which backstops and tools to use. If everything looks clean, it tells you it’s done and moves on to the next part. If not, the program gets kicked out for human intervention.”

A similar tale can be told about another piece of Amada equipment Metcam installed in late 2018 – an FLCAJ 3015 6-kW fiber laser cutting system with AMS automatic load/unload capabilities. Considering Ward’s first punching FMS was purchased in 1986, a second Bystronic two-laser tower FMS in 1997, and now this latest system, he has plenty to say on the subject.

“For us, automation is the only way to go,” he says. “We’re constantly working to sequence our jobs and equipment such that we can efficiently cut, punch, bend and then send everything on to powder coat or paint, which are also largely automated. Everything is really humming along.

“We have four turret punches, three lasers and 12 press brakes, each with a light on top,” he continues. “When one turns red, it tells our material handlers to go take the parts to the next station or bring more material. We’re so far ahead of schedule that I’m thinking about shortening our quoted lead times.” 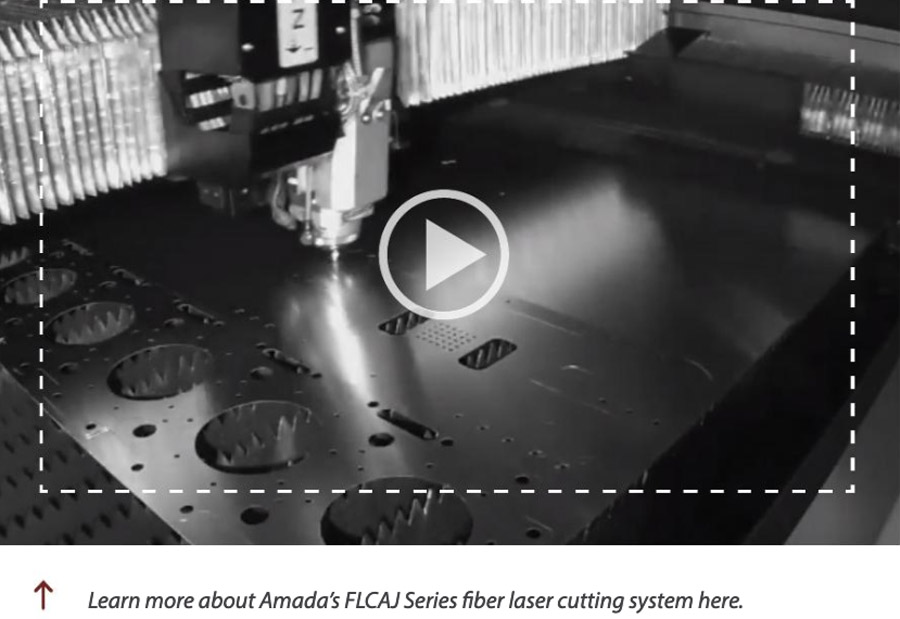 Though Ward is 72-years old – an age when most are busy reminiscing over their former careers – the part-time ice cream aficionado is busy making new plans. Aside from reducing lead times, he’s also working on making the shop paperless and wants to collect shop floor quality data electronically so it can then be fed into Metcam’s Syteline ERP system.

“I like to think of manufacturing as controlled chaos, because when you eliminate one bottleneck or problem, you’re going to create another one somewhere else,” he says. “But these are often good problems to have. For example, having an automatic tool changer on a press brake has made us so efficient that we’ve decided to run some of our jobs twice a month now instead of monthly, which not only makes us more flexible but helps to reduce our work-in-progress and finished goods inventory.

“And since we moved a lot of our work from the turret punches to the lasers, our material utilization and scrap rates have both improved significantly,” he continues. “At the same time, though, it’s required us and our employees to rethink our processes. That’s the way life is. You’re never going to get to perfection, but you can get awfully close. The trick is to keep doing all you can to make things better.” 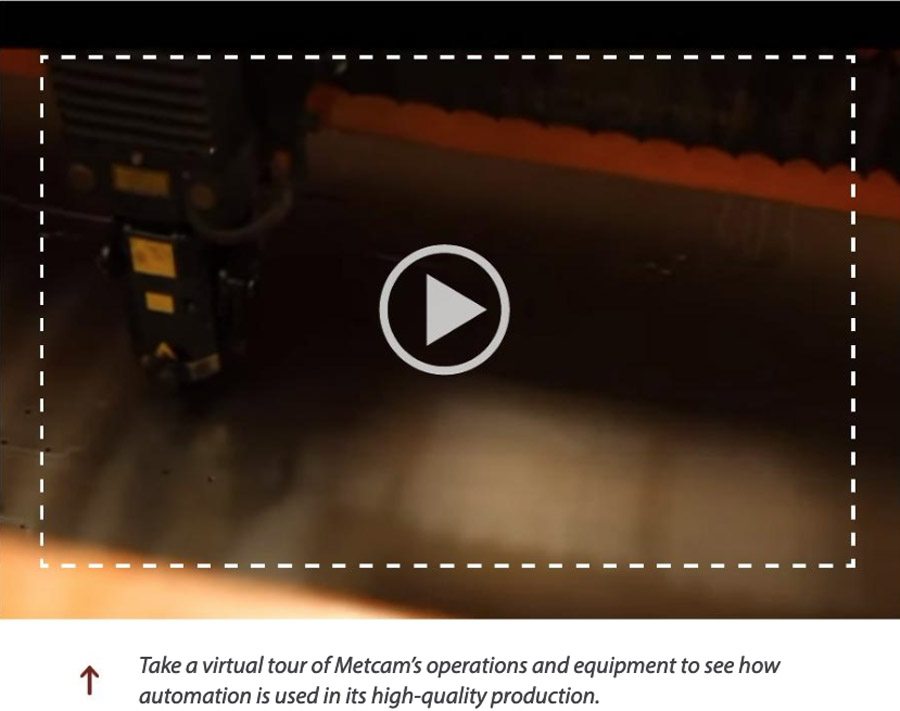