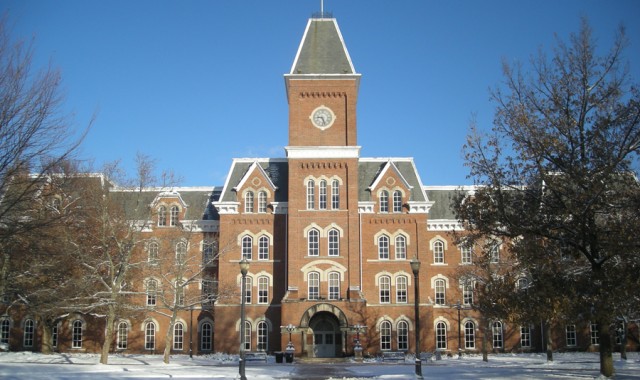 Some of the most important innovations the world has ever seen have come from university research programs. From the Internet, GPS and solar power that were researched and developed at MIT, to rocket fuel refined at Clark University, to plasma screens born out of research from the University of Illinois, universities have long been the hub for advancement and innovation.

The practice continues today at Ohio State University where a team of researchers is embarking on technology that could be a game changer in metals-based manufacturing.

Anupam Vivek, Ph.D., who was a graduate student in Prof. Glenn Daehn’s research group and is now a research scientist at OSU, remembers fondly the day during holiday break in 2011 when the campus lay mostly silent. He and a handful of other researchers were busy testing a concept at the university’s Impulse Manufacturing Laboratory, an experiment that offered a stark contrast to the winter silence.

With a mighty bang and a plume of smoke, the research team completed its first successful vaporizing foil actuator (VFA) welding experiment, which “welded” two pieces of metal together.

“It was not a project at that time that we were working on,” says Vivek, whose work with Daehn focuses on different forms of impact welding, pulsed laser welding, conformal interface joining, and electromagnetic pulse metalworking. “At that time, it was some exploratory side research. However, its success opened a lot of opportunities for research and implementation of impulse-based metalworking, which so far has not been able to enter the mainstream.”

Thanks to the breakthrough on that day, and to follow-up grants from the Department of Energy, the National Science Foundation, the state of Ohio and a few other industrial projects, Vivek and Daehn have been able to continue their research on various aspects of VFAs. The follow-up research and innovation have increased the manufacturing readiness level of the technology in addition to enabling a better understanding of the process.

With VFA technology (pronounced by OSU researchers as “veefa”), electricity stored in a capacitor is released through a circuit that holds a thin metal conductor. The heat generated in the release of the electricity is such that the metal conductor on which the electricity is aimed skips the liquid phase and is vaporized in a process called sublimation. For the impact welding application, the high-temperature gas expands and jams one piece of metal into another at impact speeds exceeding Mach 2. The high-speed impact leads to scouring of the contaminants on the colliding surfaces and a metallurgical bond is created between the two.

The vaporization process first used 10 kilojoules of electricity to vaporize the foil, which explains the explosive sound and smoke. However, four-plus years on, the research team has realized the same results using only 1 kilojoule of electricity. By contrast, Vivek points out, a resistance spot weld takes tens of kilojoules per weld. This economy of energy provides further validation for the support from the Department of Energy.

The first experiment (one of the first of which you can see here) required a thick metallic box to protect the work area, but it can now be accomplished within a polycarbonate chamber.

“Now what we’re able to do is experiment with much less energy and smaller foils,” Vivek says. “The noise and smoke are immensely reduced.”

In the four years since that day during holiday break, the research team, which includes undergraduate as well as graduate students and Impulse Manufacturing Laboratory supervisor Geoffrey Taber, has successfully used VFA technology for welding, forming, shearing, powder compaction and embossing.

Under a unique technology commercialization program called I-corps@Ohio, Vivek and his team have reached out to the automotive industry for feedback, and potentially for inclusion in their assembly plants. Considering that most sedans require around 3,000 spot welds, hundreds of fasteners and several meters of adhesives, VFA technology could significantly improve performance and reduce assembly costs, which can be passed on to customers.

The auto industry is tasked with joining dissimilar materials, and robots of varying sizes are used for each scenario. For every gauge thickness combination, a different fastener, and therefore a separate machine, may need to be employed. This increases the footprint of the assembly line. However, Vivek and his team believe VFA technology can utilize existing infrastructure in automotive manufacturing plants with much greater flexibility.

“Instead of using 20 robots for fastening joints,” he says, “it can be done on a single robot (utilizing VFA technology).”

What the academics and engineers at the Impulse Manufacturing Laboratory have also discovered since that first VFA experiment is that the metals surrounding the weld are largely unaffected by the heat, thus making the joint more structurally sound.

Traditional welding techniques compromise the property of the materials in the heat-affected zone, or HAZ. This leads to distortion and softening in some cases, such as with an aluminum-to-aluminum weld, which means manufacturers have to step up the thickness of the material to offset the compromised material.

“What we offer is low to no heat input, which reduces distortion and reduces softening of the material around the weld,” Vivek says.

Daehn has nearly 30 years of experience in researching impulse-based manufacturing and several field-specific patents. He is the founder and director of the Ohio Manufacturing Institute and is part of OSU’s leadership team for the Lightweight Innovations for Tomorrow Institute.

“We see this whole thing, really, as a platform technology where there is a lot that can be done,” Daehn says. “In terms of forming, cutting, and joining various materials, we see this as something that can replace presses in some regards and give you different kinds of properties than are typical.”

Back to the future

Reaching out to 80-plus representatives in the automotive industry, including parts manufacturers, Vivek says the research team is using that feedback to make improvements. They’re now at a stage where they’re ready to develop a prototype that could be of use in the auto industry.

He says it typically takes the automotive industry from 18 months to three years to implement a change in workflow processes.

“We’re in conversations with prospective strategic partners right now,” Vivek says. “It could be possible (to have a prototype in production) in the later part of 2016.”

The research team continues to work on developing relationships with and working on automation for partners who can use this technology.

“There are some major challenges within the automotive industry that have yet to be solved,” Vivek says. “There are folks in the industry looking for alternative solutions, and this could be a potential game changer.”