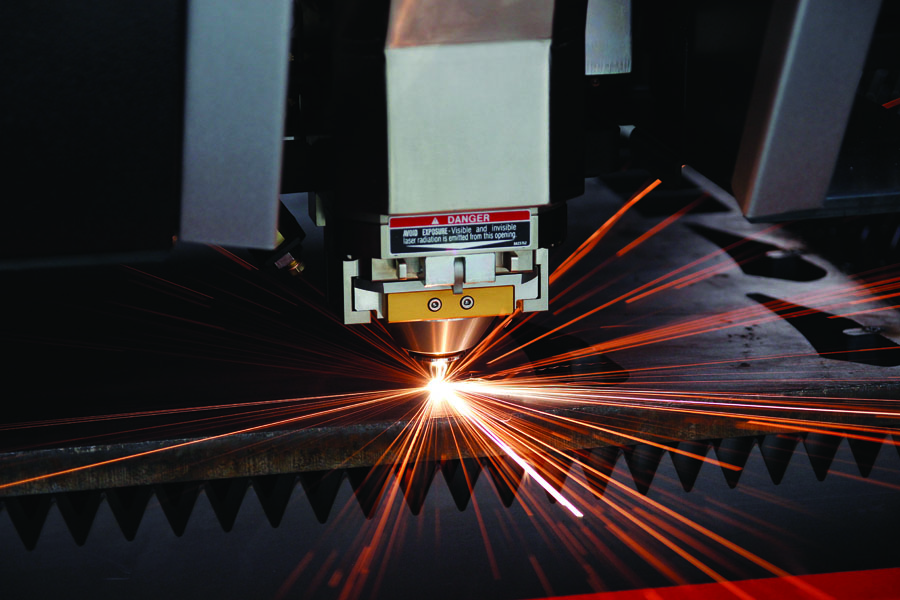 Historically, higher power CO2 lasers were purchased to handle the thick stuff – the 1-1/4-in. mild steel or the 3/4-in. stainless steel that the lower power machines couldn’t process. Most of the work in that range, however, was and still is low volume.

As fabricators are shifting their attention from CO2 to fiber, they’re seeing fiber take the same evolutionary path that CO2 once did. OEMs are increasing the wattage of their fiber equipment and are pushing it into the double-digit range of 10-kW and 12-kW machines.

Regardless of the power levels, fiber laser systems have been heralded for their ability to broach the limits of CO2 lasers. And those advancements are uniquely showcased within Amada’s new fiber laser, the LCG 3015 AJ, which tops out at 6 kW.

In addition to its ability to process a wide range of materials, including thicker materials as well as brass, copper and titanium, the LCG is a boon when it comes to reducing overhead, from electricity consumption to labor costs. Since its release, it’s proving to be the pragmatic choice for fabricators that work with a varied material mix. 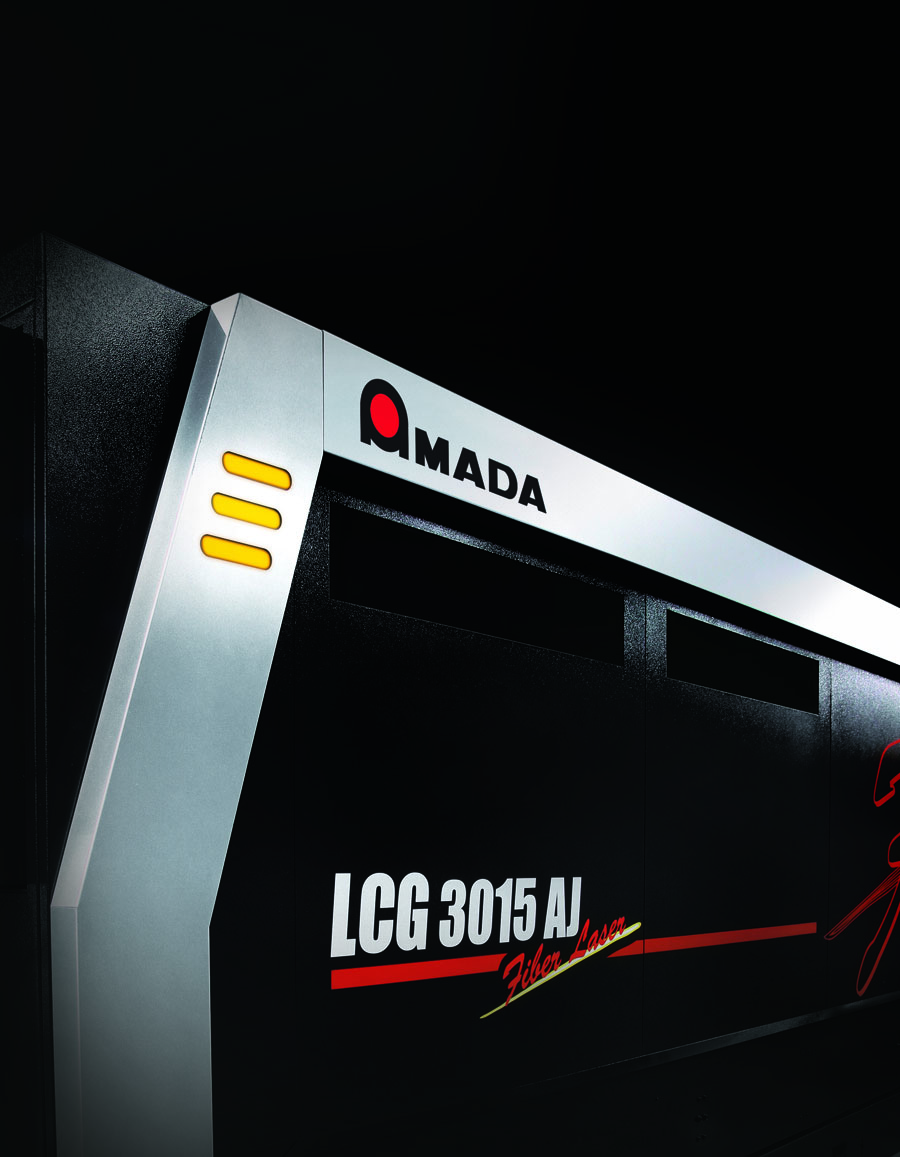 The LCG 3015 AJ was developed with Amada’s proven fiber laser technology. It’s available as a 2-kW, 4-kW and 6-kW machine.

For manufacturers, the word “fiber” on its own invokes the idea of fiscal responsibility. The technology delivers lower maintenance costs with its reduced number of internal components compared with CO2, such as the optics that are required. Gas consumption, as well, is lower, considering that fiber is a solid-state laser technology, meaning it doesn’t require a resonator gas to produce the cutting beam.

Fiber lasers are also more energy efficient, helping manufacturers lower their utility bills. With the LCG, business owners can cut their electricity bills by more than 60 percent where the laser is concerned. The LCG uses a third of the electricity required by the same-wattage CO2 system, and the electricity that it does use is consumed at a more efficient level. That in itself adds an additional benefit: eco-friendly operating. 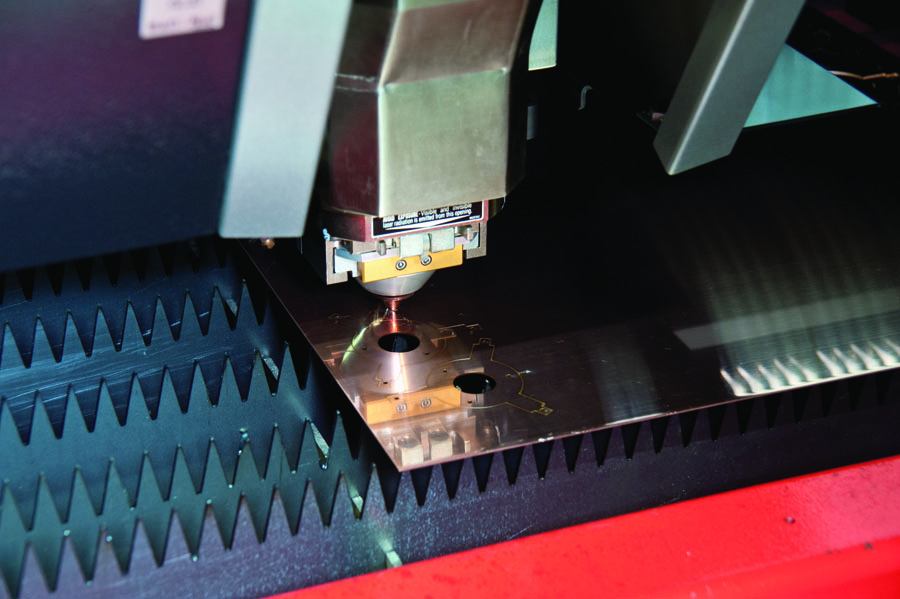 The LCG 3015 AJ can process a wide range of materials, including stainless steel and aluminum, and can also expand users’ cutting capability into brass, copper and titanium. 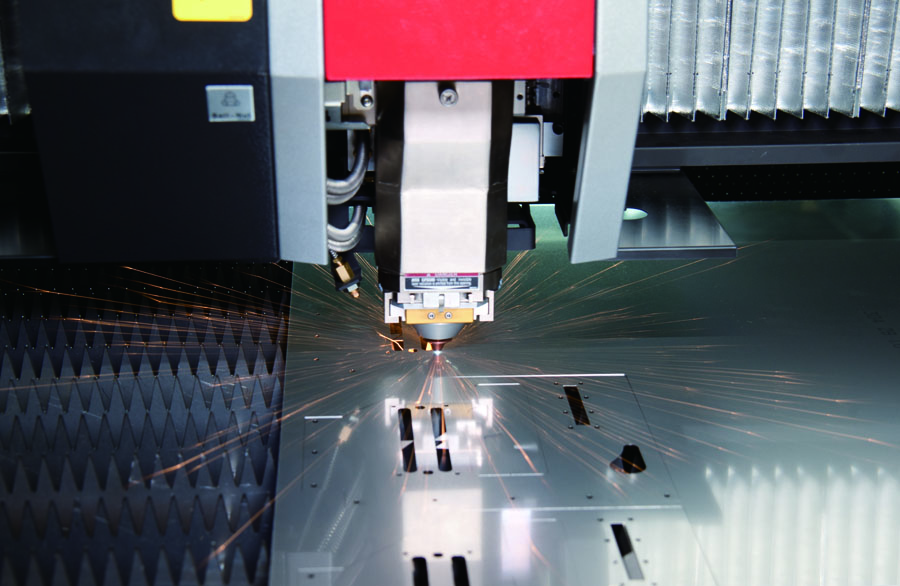 The LCG achieves its high wall-plug efficiency because of the high-quality diodes found in its resonator, or fiber engine. Because of its high quality, Amada’s current engine can generate the same amount of power while using 60 percent fewer laser diodes and 75 percent fewer modules. With less modules, there are less connectors where overheating is prone to happen, thus extending the life of the resonator.

On top of that, the LCG is, simply put, just faster. Fiber cutting speeds, in general, have outperformed CO2 when processing thinner sheet metal, increasing productivity on the shop room floor. And the LCG is no exception to that rule – its test cut speeds have been logged in at more than 3,000 ipm per axis. When more parts can be cut, the idea is that revenues will soar.

That idea, however, comes with a few caveats. Jason Hillenbrand, laser product manager at Amada America Inc., stresses that purchasing decisions can’t solely be made based on cutting speeds or the overarching benefits that come from fiber and higher power machines.

“It’s a two-fold situation that we’re getting into with higher power technology,” Hillenbrand says. “A purchase needs to be application driven, product driven and downstream driven. The LCG takes all of that into account.”

The LCG, developed with Amada’s proven fiber laser technology, is available as a 2-kW, 4-kW and 6-kW machine. It’s a true flying-optic laser system, meaning that the cutting head zips across a sheet of metal as the sheet remains stationary.

And the cutting head truly zips. It’s propelled by a highly dynamic motion system that achieves the acceleration and rapid-traverse speeds of more expensive linear drive motion systems. It also includes a full enclosure that surrounds the cutting area with access for part removal as well as a touch-screen control for faster processing. A sectionalized dust collection system keeps operators breathing easy. 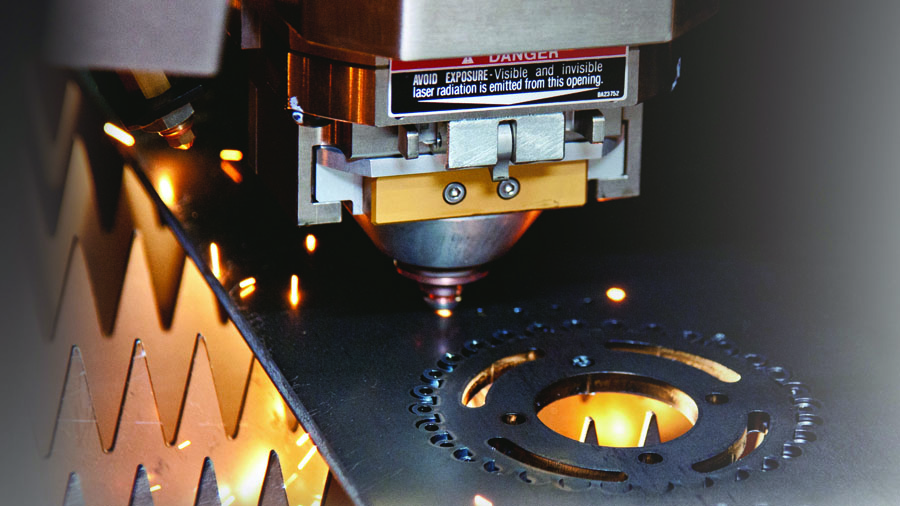 As is true with Amada’s other laser cutting equipment, the LCG’s high speeds and higher productivity result from the company’s unmatched manufacturing prowess. It also comes from the way Amada thinks about how different types of materials are cut.

“We had thick cut samples that were very nice,” Hillenbrand says of his recent trip to Amada’s research facility in Schaumburg, Ill., where the LCG’s cutting speeds were put to the test. “It cut thin and mid-range material with nitrogen at incredibly high speeds.” 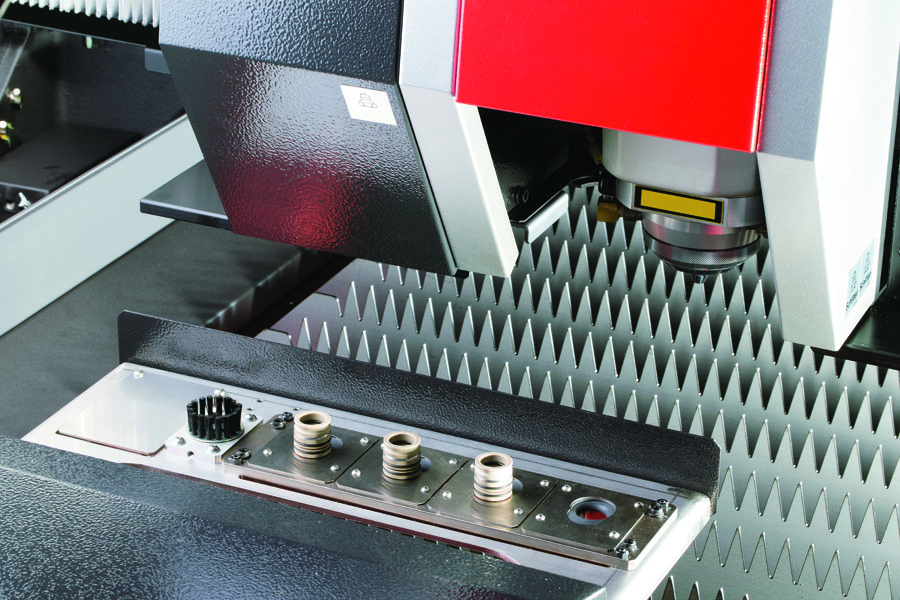 The LCG 3015 AJ was designed with ease of use in mind. Features, such as the automatic lens and nozzle changer, simplify use and reduce setup times.

“Over the last decade or more, customers with higher power CO2 lasers were starting to switch over to nitrogen in mild steels generally less than 1/4 in. because in some cases it was faster,” Hillenbrand says. “With fiber, the same is true. The LCG 6-kW cuts thin material with nitrogen at incredibly high speeds. It’s another reason that higher power is important to the companies that invest in it.”

While higher cutting speeds with nitrogen is an added benefit to using the LCG, leveraging nitrogen also supports downstream operations.

“Another reason people switch to nitrogen processing is because they have a welding process or a powder coating process after cutting,” Hillenbrand says. “If you cut with nitrogen, there’s no oxidation on the edge and, therefore, no secondary process to remove that oxidation. As soon as the part comes off of the laser, it’s ready for painting or whatever the next step is in the manufacturing of that part.”

The faster a manufacturer can get a part off the laser and onto a press brake or into a welding operation, the better – hence the reason that faster cutting speeds are attributed to faster overall part processing. The idea of faster cutting speeds resulting in increased revenues, however, isn’t always the case. 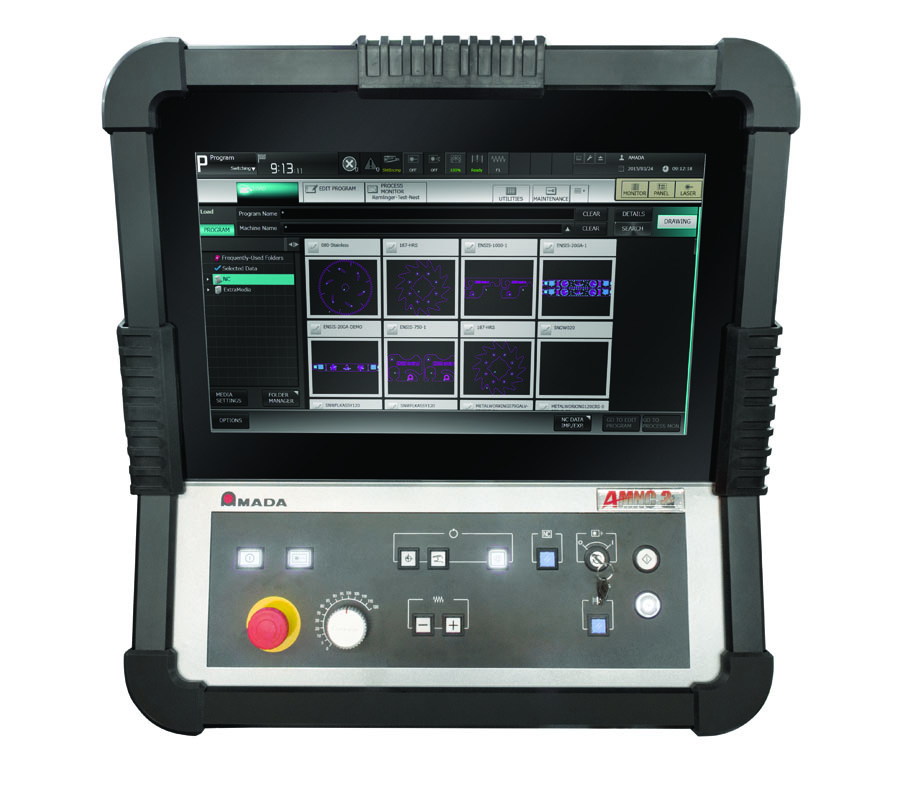 Business owners can monitor the LCG 3015 AJ’s performance through its controls, giving insight as to whether a machine is being used to the best of its ability and where improvements can be made.

When Amada engineers speak with a customer about their needs, the first order of business is to talk about the customer’s overall operations: the materials they need to cut, the products they’re producing and their downstream processes. Customers are looking to shave pennies off of a part and one of the ways that they can do that is to improve their throughput. And although the laser is often the first part of that throughput process, Amada wants its customers to be prepared for the productivity gains that the LCG will provide.

“Higher power equipment and faster cutting speeds have a reverse effect,” Hillenbrand says. “Someone might have X amount of capital dollars to spend on new equipment and they will look at the 6-kW LCG versus the 4-kW LCG. They assume that they can justify the price difference between the two because of the 20 percent productivity gain that comes from the 6 kW. But once they get it on their shop floor, they’ll find the more expensive laser sitting idle.”

The reason the laser is sitting idle is because the customer didn’t have enough press brakes, operators or welders in place to handle the increase of cut parts coming off of the laser. And now they also don’t have the remaining capital to invest in those downstream processes.

“If you’re not balancing the technology, you’re wasting your money,” Hillenbrand says. “Today, there’s press brake technology that has robotics and automatic tool change, which can give you more setups per day. This is the stuff that has to be looked at. Your capital expenditure isn’t just limited to that machine. You have to look at your whole process.”

When Amada designed the LCG, its engineers were thinking about the manufacturer’s entire process. From the laser head and controls to the motion system and the diodes themselves, each aspect of the machine was built to meet the overall needs of the manufacturing operation. It was also built with the economies of scale in mind.

“If you want to get the productivity of these machines even higher, start putting more automation in the setup portion of the laser,” Hillenbrand explains. “The LCG’s automatic nozzle changer is a good example of that. When a new program comes up, the machine cleans the nozzle, puts it away and grabs a new one. From there, it automatically calibrates the head and gets back to work.”

Hillenbrand says that a manual nozzle change can fall somewhere in the range of 5 or 6 minutes even though it only takes seconds for the operator to actually do that job. The reason is because when the laser finishes its job, the operator is most likely doing something else. As any manufacturer knows, this type of downtime puts pressure on downstream processes.

Through the touch screen, they can see what the green-light, on-time percentage of the machine has been over a day, shift, week or month. This gives essential insight into whether a machine is being used to the best of its ability and, also, where improvements can be made.

For Amada, looking at a manufacturer’s overall operations also includes looking at the capital required to invest in not only the laser system but also in secondary operations, like modern press brakes. Amada wants its customers to be able to justify the cost while still giving their downstream operations the attention they may need.

“We use helical rack-and-pinion systems for the X and Y axes and a ballscrew setup for the Z axis,” Hillenbrand says. “Although a linear drive is faster, the problem is that those drives are double or more the cost of what a helical rack and pinion can be. When you start putting your necessary profit margins on top of those things, it pushes up the machine’s price.”

The LCG also takes into account warpage in thin sheet and what could happen if a laser head is damaged. The equipment’s high-speed non-contact capacitive laser head follows the contour of the material, constantly sensing it and holding a set distance above it at all times. Designed with crash protection in mind, if a part tips up or the laser head hits something, the damage is absorbed in most cases or limited to a sacrificial piece in the most extreme cases, thereby protecting the primary portions of the drive system, which can be expensive to replace.

Today, users of the LCG, particularly the 6 kW, are job shops and contract shops that process a large variety of materials. There are also OEMs building trucks and trailers, conveyor systems and agricultural equipment, and about 75 percent of the sheet metal that they’re cutting is 1/4 -in. and below.

“With this technology, customers are looking for a fast turnover for their parts,” Hillenbrand explains. “We live in a high-mix, low-volume world, so they want to process parts as fast as they can to get to the next job and then the next job after that.”