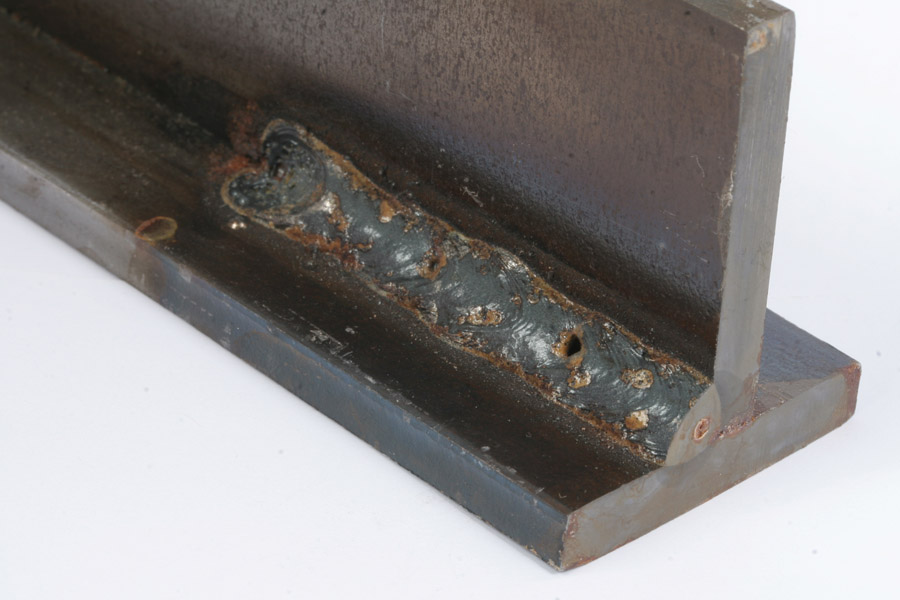 “We make what it takes.”

That is the motto for the Experimental Fabrication Shop at NASA’s Armstrong Flight Research Center located in the Edwards Air Force Base in California. A shop that has worked crafting parts and components on every significant aircraft emanating from the research center in the last nearly seven decades.

Edmund Swan, Chief, Experimental Fabrication Branch, said the FAB shop is a one-stop manufacturing, modification, and repair center. The branch consists of five shops that provide machining, sheet metal, tubing, welding, and composite fabrication. A second, smaller, fabrication center is located in what is known as Plant 42, a U.S. Air Force manufacturing facility located in Palmdale about 40 miles from Edwards.

The facilities are home to a wide assortment of equipment. Necessary, said Swan, because of the vast array of projects on which technicians work. The Center, formerly known as the Dryden Flight Research Center, is NASA’s primary facility for atmospheric flight research and is chartered to research and test advanced aeronautics, space and related technologies scientific discovery, and aeronautical research and development.

As David McBride: NASA Armstrong Center Director, put it in the rededication of the Center to honor Neil Armstrong:

Working at the center means that every day might be different. Work requests come in from engineers and designers from partner companies, and federal agencies and may entail modifications to components, repairing damaged parts, and filling a fabrication need. One example is a small aluminum housing for a miniature video camera, to be installed on the aircraft’s wingtip for recording the movement of the flight control surfaces such as ailerons, spoilers, and flaps.

Not all jobs are glamorous, of course. “While our primary focus is supporting research,” said Swan, “if there is a secretary that needs a bracket to hang a clock, we get the call.”

The router is dedicated to the composite shop where it makes molds. The composite material is then place on the mold to shape it to the part’s specification. Credit: NASA/Tom Tschida. (Above) 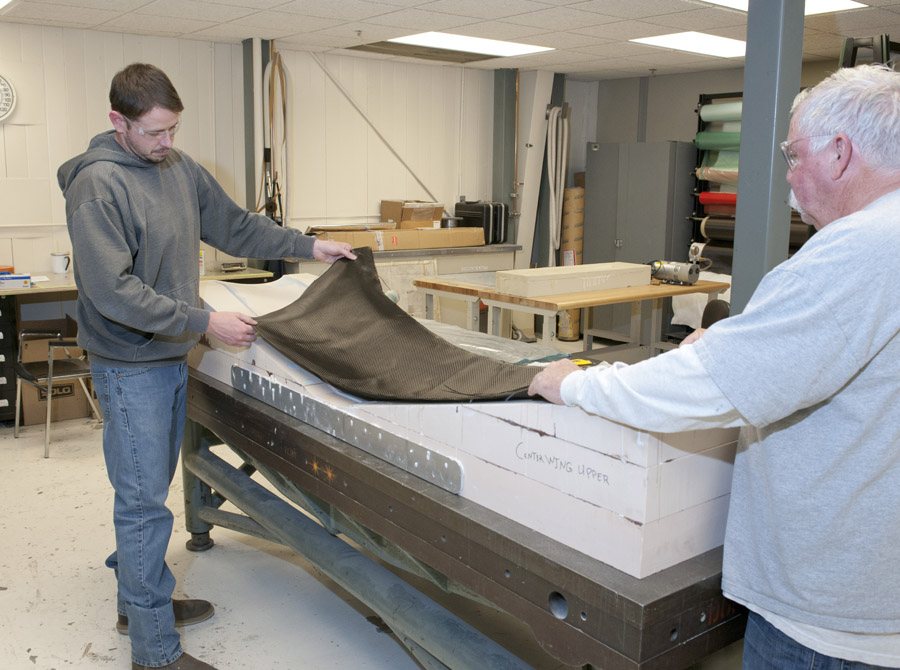 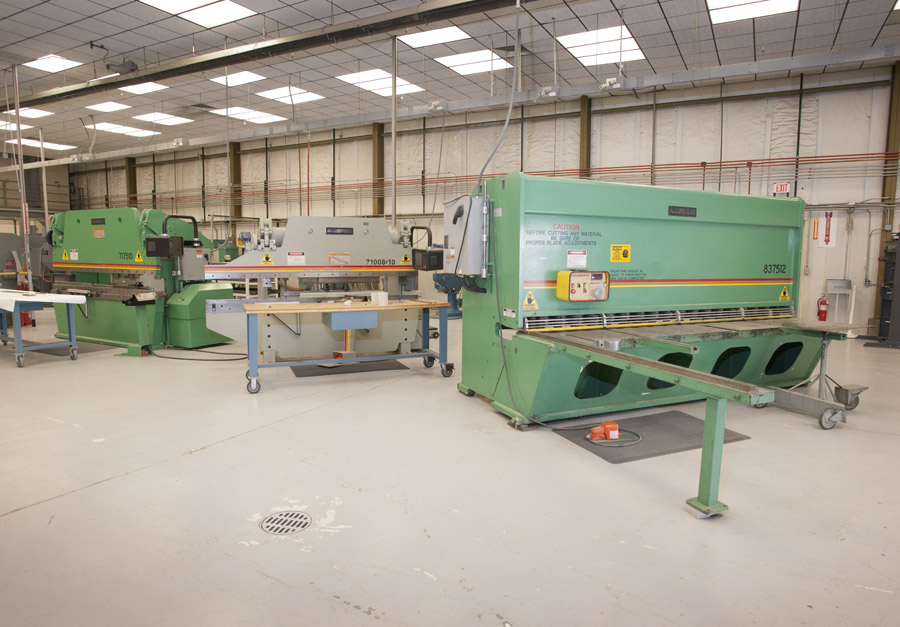 The sheet metal shop has a slew of shears, presses, rollers, and more.

History being made
And thus, that has been the way since the 1950’s when Congress provided additional funding for expanded capabilities including the fabrication shop that was established to “make all manner of custom parts on demand.” On any given day, machinists design and manufacture prototype hardware, machine complex surface profiles—holding tolerances to +-0.0002. Technicians are routinely tasked to fabricate experimental components with these tightly held tolerances as well as working in hangar performing heavy structural modifications to aircraft.

“Back in the old days, they used to talk about drawing up plans on bar napkins and using the napkin as a blueprint,” said Swan.

While those days are gone, that idea isn’t necessarily gone. Inspiration can strike anywhere. Ideas are developed and come in formats from hand drawn sketches to an official drawing format and those 2D concepts are turn them into 3D realities.

Some of these realities, include:

-Modifying a large Convair 990 jetliner fuselage so it could be used as a landing gear test bed to evaluate space shuttle tires for wear under varying landing and load condition.

device that could be used in future high-speed aircraft or spacecraft where traditional cockpit windscreens limit forward crew vision.

-Building a crew emergency escape slide in the modified Boeing 747 used to carry the space shuttle prototype Enterprise during space shuttle glide and landing tests in 1977.

-Modifying the rear fuselage area surrounding the engine exhaust nozzles on a specialized F-15 being flown at Dryden to evaluate directional engine thrust as a way of improving maneuverability.

The metals that the shop works with the most are aluminum, some titanium, and, on rare occasions, more exotic materials such as Inconel. The materials are typically delivered in sheets, bars, and straps. Composite materials are growing in use. However, aluminum remains the most common used metal because of its light weight and bendability and formability into the many shapes common to sleek, high-performance aircraft. Titanium is normally used in areas on aircraft where greater strength is needed or high temperatures are reached.

Many different types of equipment are needed to cut, form, and bend the metal to support the needs of the various aircraft research and support projects at Armstrong. One of the units used the most is a hydraulic shear that can cut a piece of metal up to 5/8 in. thick and 8-ft. wide.  Other big, powerful hydraulic and electrically operated machines can bend, roll, punch, and press metal sheets, bars, and straps into all kinds of irregular and curved shapes depending on the project requirements. Pressures of as much as 2500 pounds per square inch (PSI) are common on some of the machines used in the sheet metal shop. For a complete list of equipment used in the sheet metal shop, click here.

Machining
In the machine shop, materials ¼-in. or larger are processed into myriad parts from micro switch mechanisms to pylons that carry research vehicles and test articles below an aircraft.

All of the shop specialists are experts at operating the 40 machines on hand, from common bench grinders to the large computerized milling machines and lathes, to include inspection abilities.

The largest milling machine in the facility can handle a piece of steel or aluminum that is 64-in. long, 32-in. wide, and 30-in. thick. An electrical discharge machine (EDM) utilizes a 0.010 brass wire and is used for through holes and other cutting needs.

Other equipment includes a waterjet cutter, which operates at 55,000 lbs psi with a garnet mixture that cuts through material as thick as 7-in. and dimensions up to 4 ft. x 8 ft. This model cuts complex flat parts out of materials including metal, plastic, glass, ceramic, and composites directly from a CAD drawing or .DXF file.

A five-axis router is used to make the molds that shape the composite materials into aircraft components. This machine was used on NASA’s G-III Adaptive Compliant Trailing Edge (ACTE) project. The shop modified a GulfStream business jet to accept a shape-changing flap to determine if advanced flexible trailing-edge wing flaps can improve aerodynamics and reduce airport noise generated during takeoffs and landings.

Over the last few years, the fabrication shop has invested heavily in CNC equipment to ensure close-tolerance parts, said Swan. “With the CNC technology, we are after making perfect parts. If a test fails because of one of our parts, there’s a loss of millions of dollars in data, and in the science world that is a tragedy. We can’t afford sub-quality parts. They have to be perfect.”