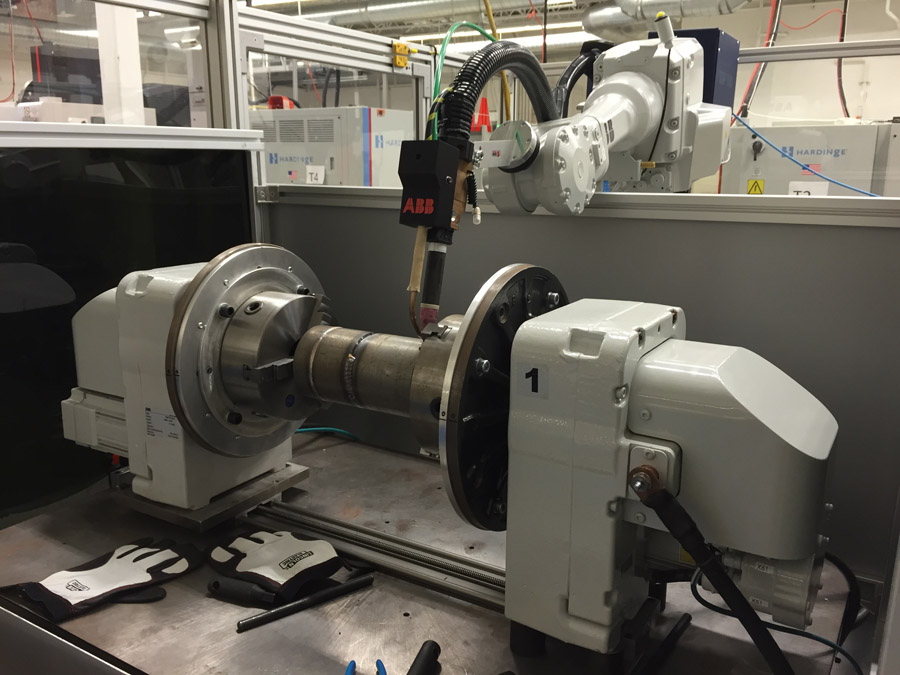 The world’s first industrial robot was patented in 1954 by George Devol, inventor of the automatic door; it wasn’t long before his “programmed article transfer machine” was put to work doing spot welds and handling die castings at a General Motors factory in Trenton, N.J. Dubbed the Unimate, Devol’s invention saw airtime on the Johnny Carson show a few years later and had a profound impact on the global automobile industry.

Welding, too, shares a similar (albeit far longer) history, and got underway soon after the commercialization of electricity. The development of gas metal arc welding (GMAW) followed by gas tungsten arc welding (GTAW) in the 1940s was, like robotics, an important milestone on the road to industrialization, and it did much to modernize the manufacturing industry.

It wouldn’t be until the mid-1970s, however, that companies would join these two technologies and introduce the first robots capable of the complex motions needed for arc welding. One of these was ASEA, which would later become ABB Robotics. Limited to five axes and with a controller “the size of a refrigerator,” the robot was the first to be driven solely by electric power, and it was micro-processor controlled to boot.

A similar transition is underway today, one that brings a new breed of TIG welding together with integrated robotics. That’s because hot wire TIG welding provider Tip Tig USA has partnered with ABB Robotics to provide an automated arc welding solution known as the Robo-TipTig Cell.

The Tip Tig process works by mechanically oscillating the wire, agitating the molten weld pool and improving its fluidity. Also, a separate power supply is used to heat the wire prior to its entering the pool, greatly increasing deposition rates.

Tip Tig has had its own automation for years, but it wasn’t until the company joined forces with ABB that they were able to develop a completely integrated system.

“Tip Tig started out as a handheld system and gradually transitioned to one that would interface to other robotic systems, but it always required the use of two separate interfaces,” Calvo says. “ABB helped us create a single interface from which every aspect of the welding and robotic processes can be controlled. That has never been done before with our product.”

Of course, they needed a place to test it. Enter Pyromation Inc., a manufacturer of thermocouples, thermowells and other temperature sensing devices. Chris Lanning, project engineer overseeing and supporting the development between the partners, says Pyromation has been a longtime fan of Tip Tig and has used the hot wire process over the past six years to join its 316 stainless steel thermowell flanges and stems, among other products.

“The deposition rates with Tip Tig are at least double that of conventional TIG,” Lanning explains. “Also, the amount of heat that goes into the workpiece is much lower. That’s a big thing for us, as it reduces distortion, and the puddle agitation caused by the oscillating wire helps eliminate any type of porosity you might have with other systems.”

Roughly four years ago, Pyromation began looking for ways to automate its welding processes. “We wanted to improve the consistency of our products and also achieve some flexibility in the workforce,” Lanning says. “It’s tough to find qualified welders, and we felt a robotic solution would improve ergonomics for existing team members and reduce the learning curve for new employees.”

Pyromation got wind of the looming synergy between ABB and Tip Tig and immediately volunteered to be the beta site. It was a perfect marriage. For the past two years, the three companies have collaborated on the equipment, culminating in the recently released Robo-TipTig Cell.

“Aside from our own in-house testing, Pyromation has been welding products using the prototype Robo-TipTig, telling us what they like and don’t like,” he says. “This has helped us to improve the product, adding features and capabilities we might have otherwise overlooked.”

These efforts largely came to a close just prior to the recent 2016 holiday season. During a workshop at ABB’s Auburn Hills, Mich. facility, team members came together for a final round of testing and fine-tuning. The Robo-TipTig demo cell contains a Tip Tig hot wire welding unit controlled by an integrated ABB IRB2600 robot, a pair of MTD250 positioners and a Miller Dynasty 350 TIG power supply, although Oxlade says the system can support a variety of power sources.

Aside from improved weld quality, production speeds two to four times greater than conventional TIG and the ease of use that comes with an automated system, Tip Tig’s Calvo says safety is similarly improved.

“This system excels at difficult materials such as Inconel, duplex steels and nickel chrome alloys,” he says. “With normal arc welding, these can create a significant risk of hexavalent chromium exposure to the operator. But Tip Tig creates roughly half the amount of heat as TIG or MIG, virtually eliminating this concern.”

Pyromation agrees. “We’re still finalizing a couple small details on the programming, but I think the product is very capable and easy to use,” Lanning says. “Further, ABB and Tip Tig were great to work with. It was a good experience learning about the technology and sharing the information needed to get the job done. I consider it a win-win-win for all of us.”