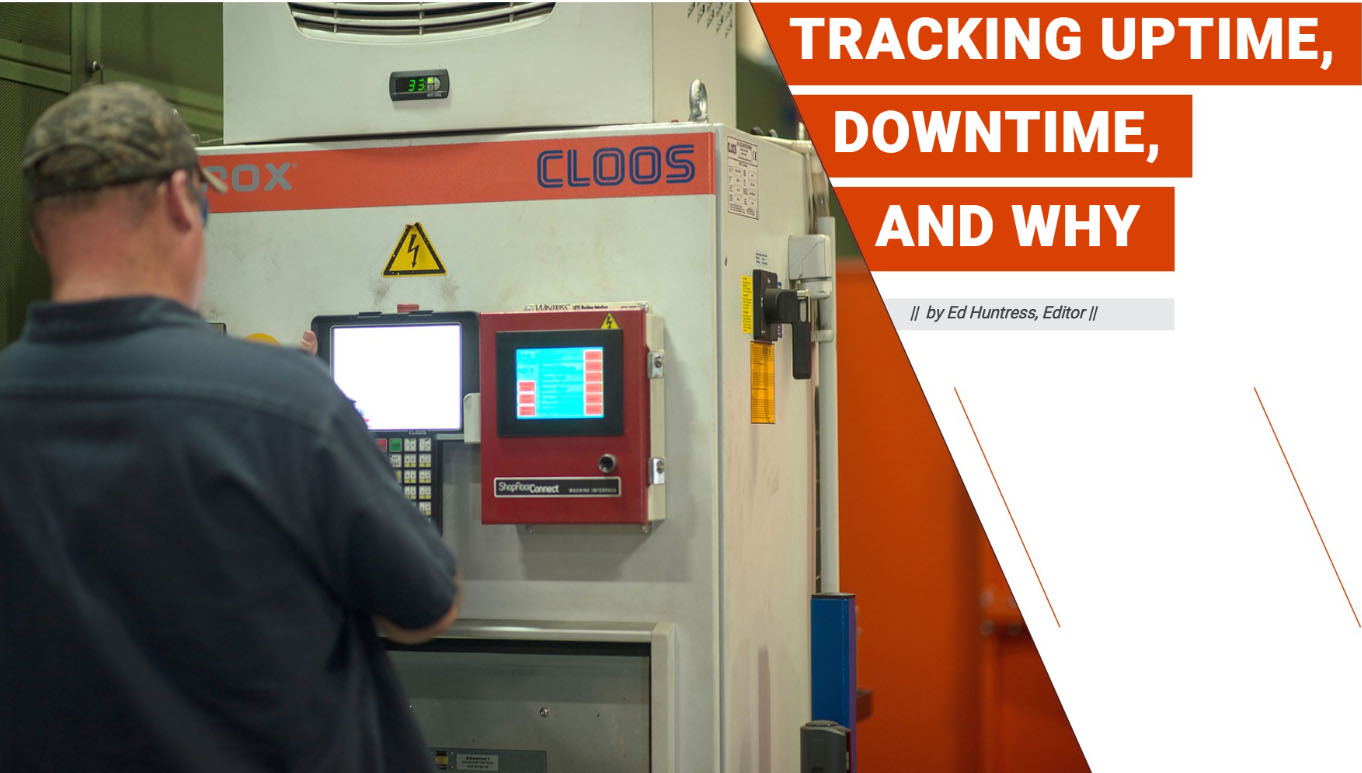 The wired-up (or wireless) shop today may be running a variety of software that does a wide range of things to boost productivity, but, in terms of realtime operations, machine monitoring arguably is the core of it. It’s a productivity booster in large plants and small shops alike, and, even in large plants with comprehensive management systems, it provides the machine-tool-level intelligence that allows real-time corrections, as well as reports for further analysis and data inputs for comprehensive ERP and other management systems.

Machine builders offer dedicated software that produces reports or real-time displays of events and much of it is ecumenical – it connects with other machines and software, made by different manufacturers. But Fab Shop wanted a third-party source to get a view unbiased by machine types or builders, so we looked into ShopFloorConnect to see what’s under the hood, and how it works in real shops. Selling a software product by itself, rather than as an accessory to a machine tool, the company has an incentive to work with almost any machine and data-handling system, so theirs is a good benchmark for the software category.

The first problem is that the inputs to most data-collection software involve manual data entry. “It’s somebody entering in counts, downtime hours, uptime hours and so forth into a terminal,” said makers of ShopFloorConnect. And, according to the company, the three common problems with manually collected data are untimeliness, inaccuracy, and bias. “People hate doing it [entering data],” said Finnerty. “It’s a job that they will often put off until forced into doing it, and then you end up with a bunch of machine operators entering in the data by which their job performance will be judged.”

Ahem. Enter the immediate, accurate, and blithely unbiased data collection by computer. Unlike complex sensorbased data acquisition that attempts to measure some sliding-scale value, machine monitoring of this type involves only on/off switching – a machine either is running or it is not. What we’re measuring here is uptime versus downtime, and the only scale is time. So we need a clock that automatically time-punches the ons and offs.

But we need more information. Why the downtime? This is where forethought and a good understanding of actionable shopfloor information enter the picture. We want to know why, and we don’t want an essay. 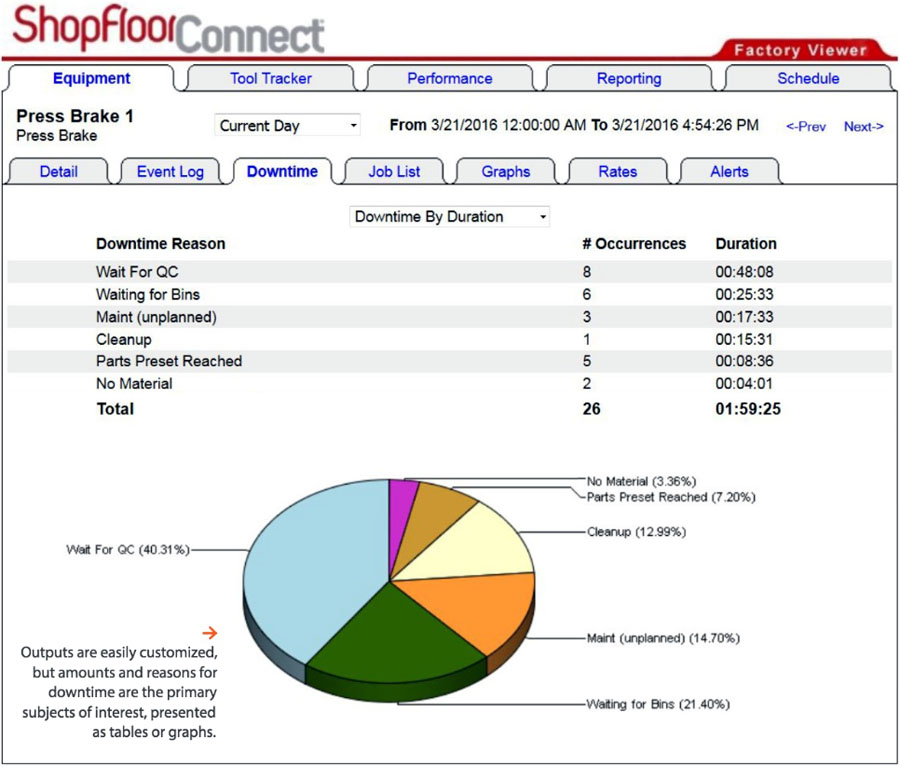 “We allow our users to create a downtime reason menu for each machine, rather than us selecting the conditions for them, whether it’s planned downtime or setup related or unplanned downtime. All the operator does is to select the reason. When the reasons are configured for each machine, whoever’s doing the configuration says, ‘When the operator says ‘there’s no work for the machine,’ that’s going to go into ‘planned downtime.’ However, when he says he’s taking out a tool or putting in a tool, that’s going to be setup related activity.” 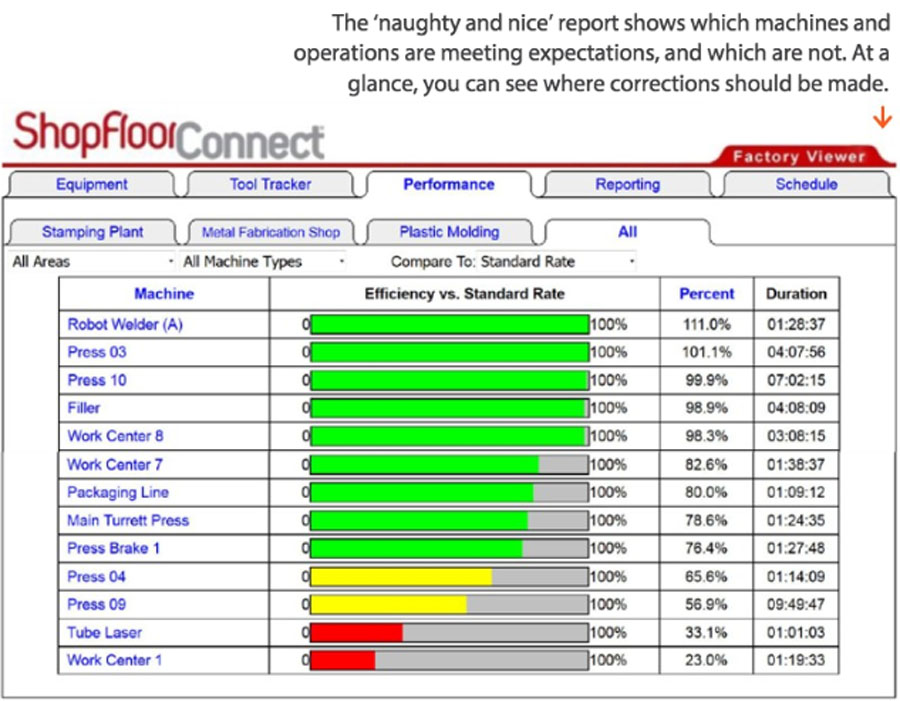 And so these menus are customizable for the machine type and for the issues a plant wants to track. Any time, in real time, the operator knows, and management knows, how this job, and this operator, are doing.

If there’s a problem, alerts can be programmed into the monitoring system. And an alert in one circumstance may not be worth an alert in another:

“Depending on what reason the operator selects for the machine being stopped, the software automatically alerts whoever you need to alert for that reason,” said Finnerty. “It may alert the person responsible for bringing the material over, it may alert the foreman for that department. Regarding alerts, one of the things we learned early on was that no alert is permanent and a lot of people want to just temporarily have alerts on there, so we made them very easy, not only to set up, but to turn on and off once they’re set up.”

“For example, there may be a couple of machines that are running a really hot job and the foreman or the production supervisor wants to know any time those machines are stopped for longer than five minutes. That high demand situation may last for three or four days, and after that, it’s not that important. So he can turn that alert on or off.”

ShopFloorConnect, therefore, doesn’t require a lot of inputs to do its job, but it requires some very thoughtful operating details and outputs to get the most out of it. Since it’s a versatile system that will work with many kinds of machines, and with machines of different brands, interfacing with a wide range of planning and analysis tools, it sounds like it would require a lot of custom interface programming to connect with all of the different possibilities. Not so. It’s a creature of some fairly new, very sophisticated system tools that make it easy, on the company and on the customers, to customize the system for a particular use.

“For example, we can produce all kinds of outputs. There are live displays that can be put on large format, flat screens out in the factory. There are charts, there are graphs. The way we do it is at the heart of our system; we just use the Microsoft SQL database.

“Microsoft has some really amazing tools in the last couple of versions. One of them is called SSRS, which is SQL Server Reporting Services. Don’t think of a report as just a spreadsheet that prints out; the report can have all sorts of gauges and graphs and bar charts. It’s all dynamic and it can automatically refresh. You can display on a big flat screen that cycles through efficiency graphs and uptime graphs and all sorts of things, for a department or the whole factory.”

And then there are APIs [application program interfaces]. “ What an API does is it allows different pieces of software from different manufacturers to communicate with each other,” said Finnerty. “There are a couple of standards out there but they haven’t been widely adopted. One is called MTConnect and that’s very big in the machine tool industry, but not so much in metal stamping or fabricating just yet.

“Think of the old-time switch board where a call will come in from one place and the operator will plug in a cable to another place. That’s what the API does; it maps one point to another point. ‘Here’s what Wintriss calls the job number, here’s what the ASP [Application Service Provider, a provider of computer-based services to customers over a network] software calls the job number, and we’ll plug this field into that field.

All these things happen behind the scenes. It becomes a much easier exercise to communicate among different software,” said Finnerty.

HOW IT’S BEING USED

To illustrate the extremes: “GE uses our software throughout the Caribbean. They have five plants using ShopFloorConnect and there are hundreds of machines involved. But we also have a couple of places that do food packaging, where four lines are all they have in the whole facility, and they’re using our software. But our typical installation is around fifteen machines.”

What about fab shops?

“Turret presses, flat-bed lasers, 3D lasers, press brakes, metal stamping presses, robotic and manual welding cells, all have been connected to ShopFloorConnect,” said Finnerty. “I should point out, though, that not all machines can take advantages of all facets of the software, because of the complicated nature of the way they run. “What I mean by that is, take a turret press for instance, or a 2D laser — something that starts with a sheet and makes blanks. It’s not that they’re going to start running part A and run 100,000 of them and that’s all there is to the job. They’re going to try to maximize the sheet of material, steel, other metal, whatever it is going into the laser or the turret press. That one sheet may make seven different parts, different part numbers and different quantities. That is all decided at run time with nesting software.

WHAT IT COUNTS, AND WHAT IT DOESN’T

“We don’t count individual parts for something like that; it becomes a very complex task. What we do instead is to count sheets that are used. More often than not, rather than trying to count the parts, we just track machine utilization. We track what job is running and the uptime and downtime and reasons for downtime. We don’t try to track counts or efficiency percentage or anything like that because to count the individual parts really is too complicated a process.

Once a user has the data, what is the scope of actual uses to which they can apply the new information?

“The obvious uses are for figuring out where time is being wasted. But often it’s for Return On Investment calculations for new equipment purchases.”

And there are a lot of operational details that can be improved once the lost time is identified and measured. “If there are multiple operators all doing the same thing, and over time you see that one of them has much better setup-time percentages than the others, you put him in charge of training.” [editor chuckles] “You chuckle but it really is as simple as that, that’s what some of our users have done.”

With just a few inputs, out comes a lot of operational intelligence. That’s why this class of monitoring software, which really doesn’t have a formal name, is justifiably called the “core” of productivity-boosting, shop-floor software.