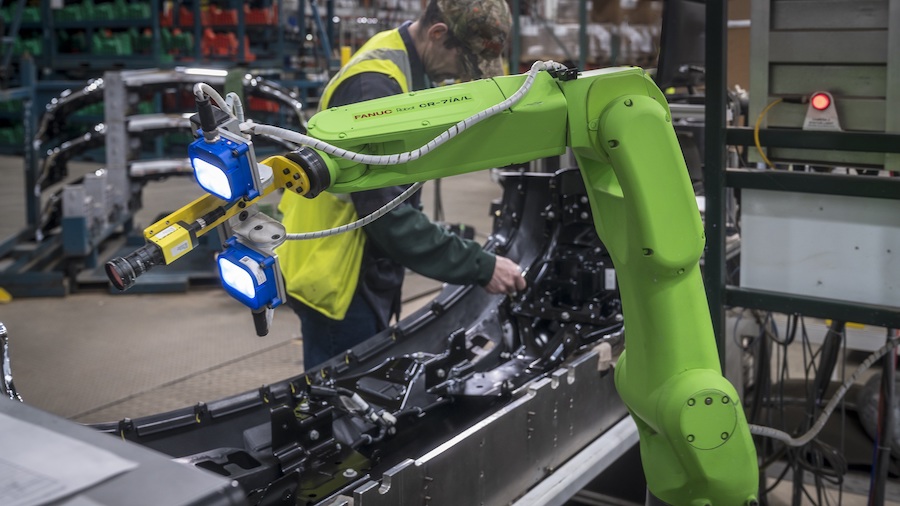 In today’s highly flexible manufacturing environment, automation is the key to success. Whether it is in a large automotive factory or a small fabrication shop, automation is an

ideal way to improve quality while reducing labor. Whenever parts are run in a batch, whether its thousands at a time or ten at a time, automation can perform the task.

One great way to add intelligence to a robot is to use machine vision. Giving the robot “eyes” provides many advantages that help reduce costs, including reduced fixturing, increased efficiency for part changeover, minimal system rework needed to introduce new products and the ability to do error proofing during the manufacturing process.

Adding machine vision can help improve the process and add flexibility to the operation, even for smaller batches. For example, instead of the operator having to load a bracket part into a machine, a robot with machine vision can be set up to do it. This frees up the operator to do more value-added tasks. And with the introduction of collaborative robots, in many cases the robot does not have to be isolated from the operator.

There are many ways to add machine vision to a robotic system. Standalone vision system suppliers offer products that can communicate with the robot. Some robot manufacturers partner with vision system suppliers to offer solutions. Others, like Fanuc, develop complete products in-house, such as Fanuc’s suite of fully integrated 2-D and 3-D vision solutions under the nameplate of iRVision.

For many robotic workcells, the robots are the focal point of the system. Therefore, it makes sense the robot can reliably make its own decisions. Integrated machine vision allows the robot to decide for itself which part to interact with and where that part is located.

When it comes to a successful automated manufacturing operation, reliability is important. With an integrated vision solution, there is no PC or smart camera required. All of the vision algorithms run on the same robot control CPU that controls the rest of the robot, like motion and logic. There is no worry about the reliability of a PC that is critical to production. The camera, 2-D or 3-D, plugs directly into the robot controller’s main CPU. The Fanuc-supplied camera and robot controller are connected by Fanuc-supplied cables.

Nobody knows how to control a robot better than the robot manufacturer, and Fanuc is no exception. iRVision can utilize all of Fanuc’s advanced motion algorithms. The automatic calibration, capability to take a picture on the fly, robot- or fixed-mount camera support and through arm vision cables are some advantages that an integrated vision system has over a third-party vision system.

Integrating two pieces of equipment from two different sources is often a challenge. By selecting an integrated vision solution, there aren’t any issues with getting two different

pieces of equipment to communicate. With iRVision, because the camera is plugged directly into the camera port in the robot controller’s main CPU, there is nothing to do to get the vision system talking to the robot.

Another requirement for a successful automated workcell is support. Every system, even the most reliable, has the potential to go down. A system with machine vision is no exception and may need support from time to time. With quality support, the impact downtime has on production can be minimized. If a vision-guided robot is not interacting properly with a part, it’s important to determine if it’s the robot or the vision system that needs attention. Would the end user call the robot manufacturer or the vision system supplier? Would it take support from both to solve the problem?

Machine vision is part of the solution for many robotic applications. Selecting an integrated vision solution provided by the robot manufacturer can save time and money during setup as well as increase reliability during production and increase the efficiency of part changeover.