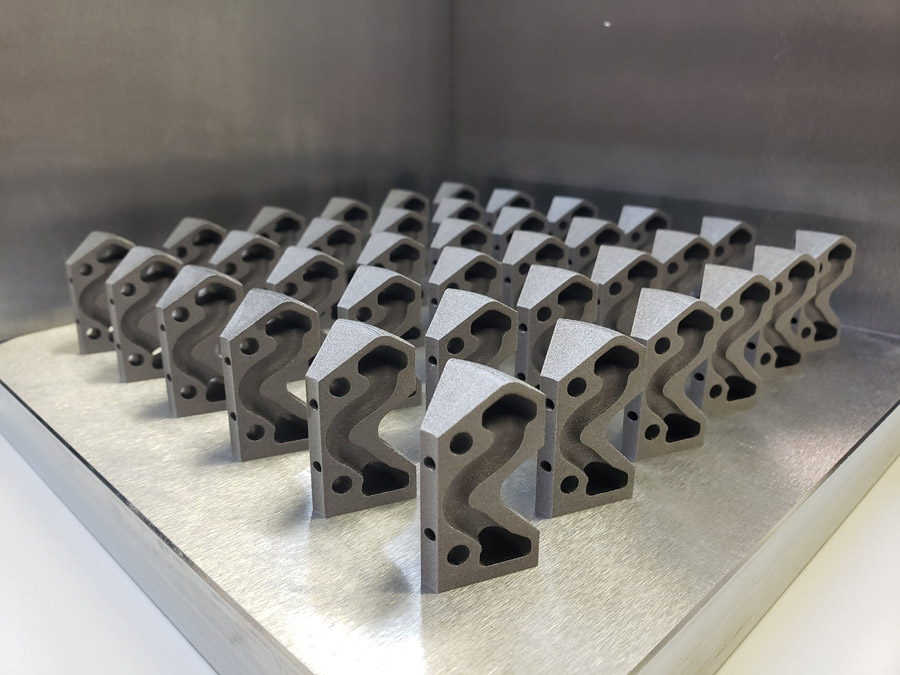 The additive manufacturing industry has had the proverbial pedal to the metal for the past three decades. Also known as 3-D printing, the first commercially available machines were good for little more than show-and-tell prototypes and patterns for investment castings. That all began to change as machine builders went beyond photocurable resins to engineering grade plastics and then metals.

Suddenly it became possible to produce end-use parts from a host of materials. Part sizes ranged from components small enough to fit inside a smart phone to those larger than a passenger car, often with accuracy sufficient to supplant traditional machining, casting and injection molding processes. Some suggested (incorrectly) that machinists had better start looking for new jobs, as 3-D printing was sure to eliminate their trade entirely.

But in the sheet metal fabrication world? Not so much. The complex organic shapes made possible with 3-D printing don’t lend themselves well to electronic enclosures and other boxy sheet metal parts, nor can the relatively slow build speeds common to 3-D printers compete with a laser cutter and well-tooled press brake. At Bob’s House of Sheet Metal or Joe’s Fabrication Services, additive manufacturing has long been a technology that’s interesting to read about, but offered little in the way of practical applications. 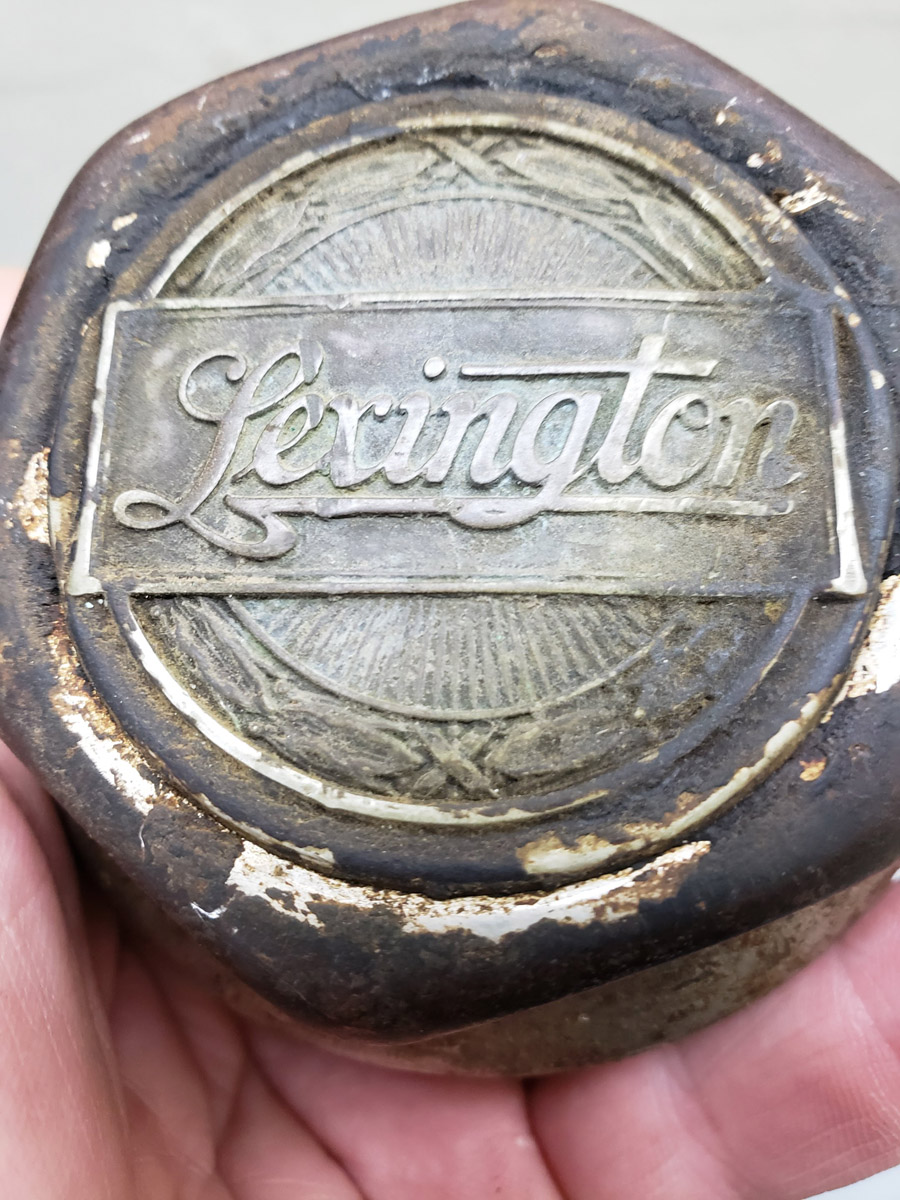 3-D printing comes to the rescue after a B&J Specialty customer was unable to find a replacement part for the hubcaps on his 1953 Corvette.

For fabricators wishing to think outside the box, however, 3-D printers are not only opening doors but they’re making new ones entirely. This was the case recently at Centerline Engineered Solutions Inc., a South Carolina job shop whose investment in a Markforged Mark Two printer turned out to be a wise decision.

“One of our customers asked us to quote on a four-piece rush order for some brackets made of 14-gauge steel,” says Phil Vickery, Centerline owner and president. “Most of it was easy enough to do on one of our press brakes, but there was a series of louvers on one side of the part, and of course we didn’t have the right tool. So we started brainstorming other potential solutions.” 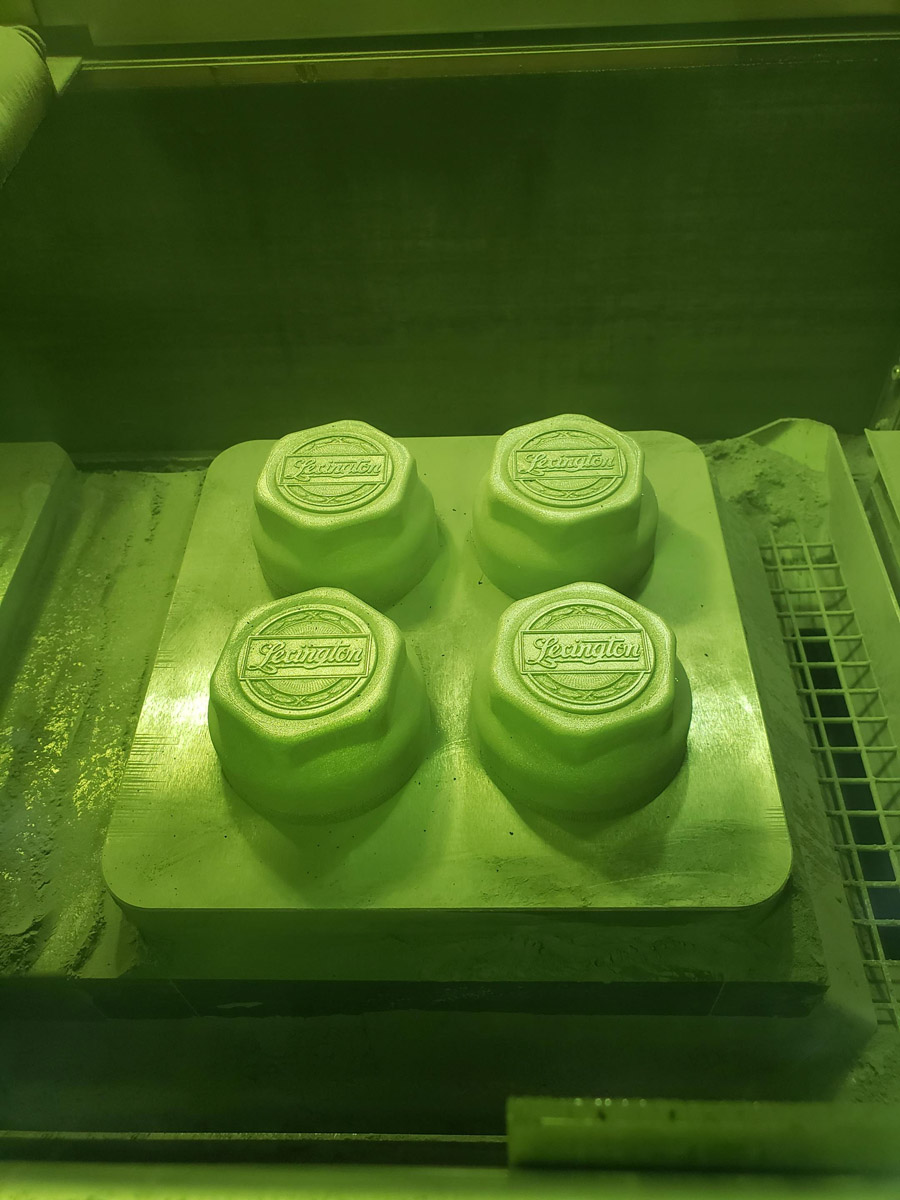 The 3-D-printed Corvette hubcaps emerge from the powder bed, ready for finishing work.

The winning solution was to use Centerline’s shiny new Mark Two to 3-D-print a punch and die set from Onyx chopped carbon fiber material, one of several high-tech polymers available from Markforged. Yet Vickery and his team knew the material wasn’t strong enough to actually lance the louver shapes, so they stopped the printer midstream and placed a metal support piece inside a cavity they’d designed for that purpose.

The die set worked like a charm. Vickery estimates it shaved at least a week off the lead time and saved his company around $1,200 on tooling costs. He’s since used the Mark Two to print various welding jigs and fixtures for checking parts, most of which are admittedly used more for machined parts than they are for bending and forming purposes.

But why did Vickery buy the 3-D printer in the first place? After all, the special press brake tool wasn’t needed when he accepted delivery of the Mark Two, so what was the reason for spending more than $10,000 on a piece of equipment that had no discernible use?

“I saw it as a way to bring additional value to my customers,” he says. “Much of what we make here are parts that go into someone else’s machine, and with 3-D-printed plastics becoming much stronger and more rigid, I saw a lot of opportunities to replace some of those metal parts with ones made of plastic. I felt like my customers would be open to that idea, and there are also applications within our shop where we can get some value out of it. It was a little bit of a gamble, but I felt like the investment would pay off in the long run.” 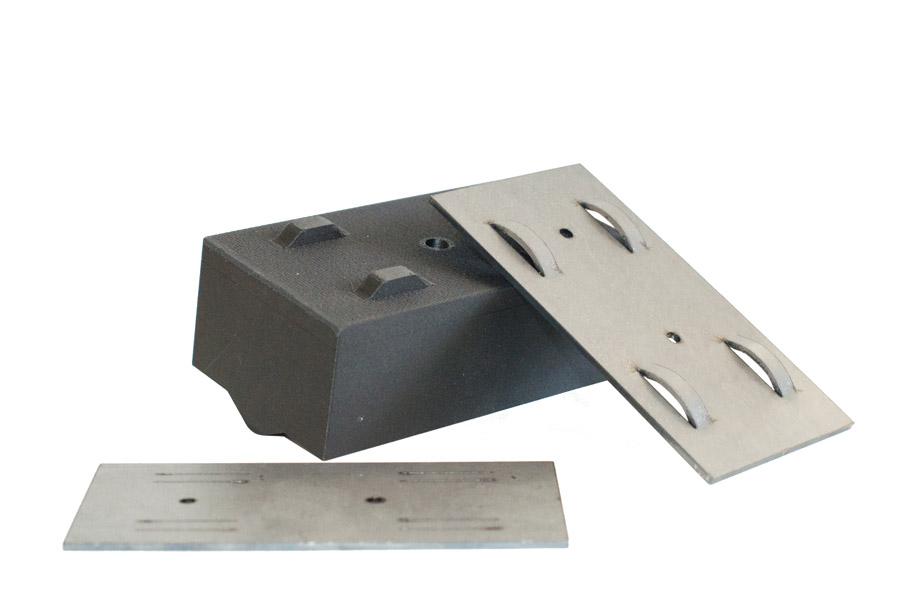 Here’s the 3-D-printed punch sitting alongside before and after workpieces.

Incodema Inc. is a short-run sheet metal prototype shop in Ithaca, N.Y. So important has additive manufacturing become to this company that it spun off a separate division in 2014, Incodema3D, to focus exclusively on 3-D printing. Today it has 11 direct metal laser sintering (DMLS) machines from EOS, two 3D Systems ProX DMP 320 (direct metal) printers, and a laser-based Renishaw powder bed fusion machine.

Director of business development James Hockey says 3-D printers offer distinct benefits in a sheet metal environment. “Just as a tooling house will print up a handful of parts before pulling the trigger on an injection mold, a sheet metal shop can eliminate a lot of risk by making some prototypes for form and fit testing before starting on a progressive die,” he says. “For validating product designs, tooling and fixtures, additive is a fantastic way to go.”

If you’ve heard horror stories about the internal stress and resultant warpage encountered with 3-D-printed metal, especially on the thin-gauge parts found in most sheet metal shops, Hockey says there’s little to worry about.

“It’s essentially a computer-controlled welding process,” he explains. “Whether you’re talking about Inconel, titanium or aluminum, we have no problems with warping or distortion.”

This makes 3-D printing increasingly popular for low-volume production of medical parts, injector nozzles for the aerospace industry and any number of stamped metal components for the automotive market.

It’s not a slam dunk, however. Hockey says it’s often necessary to collaborate with customers on their product designs, modifying them to fit within the constraints of 3-D printing as well as finding ways to take advantage of the technology. Where conventionally manufactured part geometries are limited to round holes and relatively orthogonal shapes, ones that are made additively can take on bold forms that are lightweight, strong and otherwise impossible to produce.

“We’ve worked with clients that were using traditional manufacturing technologies to build their parts, brazing and welding multiple components together because that’s the only way they could get it done,” he says. “Worse, those parts are prone to fail on the final assembly steps, whether it’s because of porosity, operator error, whatever. By redesigning these parts for additive, product manufacturers often realize significant cost savings and reduced time to market.” 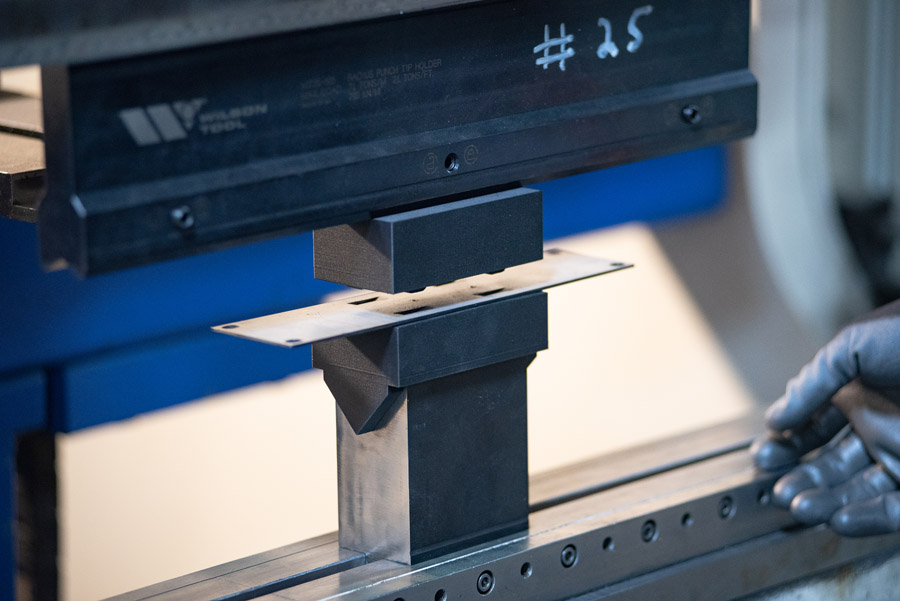 Who would have guessed that carbon fiber material could be made strong enough for press brake tooling?

“Quite often I’ll receive a part file from a customer asking me about 3-D-printing it, but there’s nothing really unique about the part that actually requires it to be printed,” Rauch says. “That’s when we’ll go back to the customer and explain to them that, if they’re not interested in improving the design, reducing its weight or making it easier to assemble, then we might as well make it using conventional technology.” 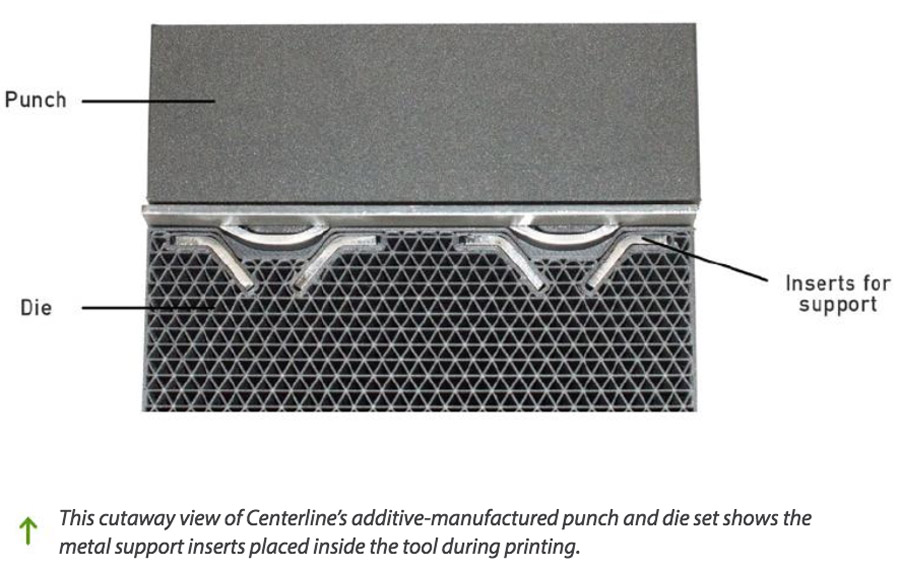 One automotive customer, for instance, came to B&J complaining about a faulty check fixture they’d received from another supplier. Rauch quickly determined that the fiber optic lines feeding the sensors were exposed, allowing them to become damaged during use. He scrapped the design and 3-D-printed a replacement fixture that employed an internal “organic-like” lattice structure, a feature that would previously have been unmanufacturable.

Rauch is working on a method to use conformal cooling channels in hot form stamping dies, similar to the channels found in additive manufactured plastic injection molds and inserts. He noted that 3-D printing’s ability to generate not just round holes but teardrop and even helix shapes creates a far more effective “turbulent” cooling method.

“It’s also a great way to fix a crashed stamping die,” he says. “We can scan the tool with a white light system to determine the damage, mirror the undamaged portion of the die onto that surface and build it back up via 3-D printing. It’s a huge timesaver.” 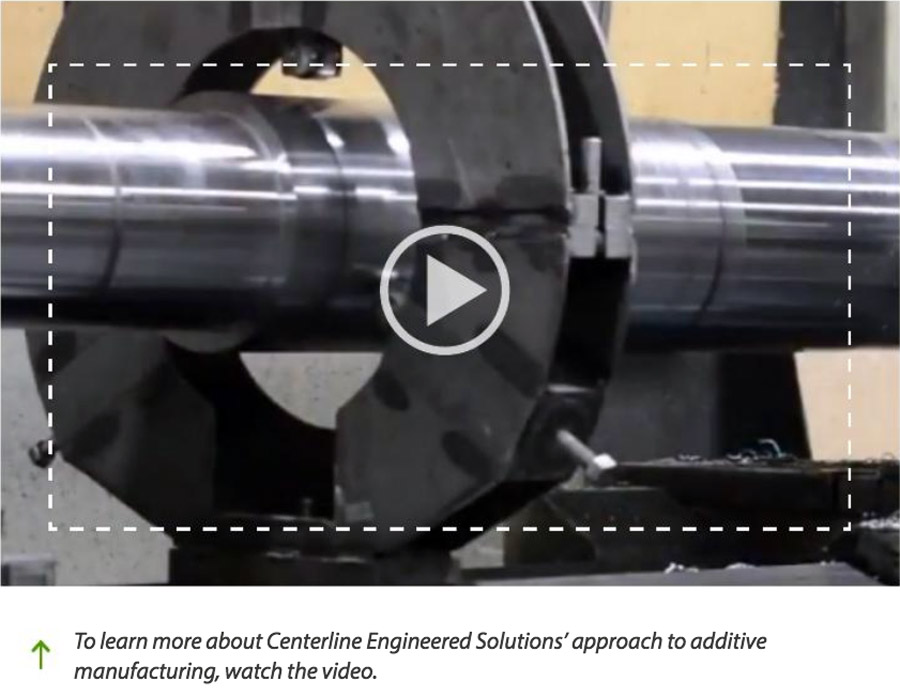 None of this comes as a surprise to Wayne Benson, director of factory floor solutions at Minneapolis-based 3-D printing provider Stratasys Ltd. His customer list includes dozens of sheet metal shops using 3-D printers for CMM fixtures, forming and stretching dies, and even a U.S. Navy aircraft carrier where personnel used a Stratasys machine to print repair parts for a damaged aircraft while at sea.

Another common use for additive manufacturing is with lean manufacturing initiatives. “They might use it to print 5S shadow boards or ergonomic handles for equipment and so on,” he says. “Overwhelmingly, we find that once a shop has its own machine in house, employees find dozens of uses for it they would never have imagined.” 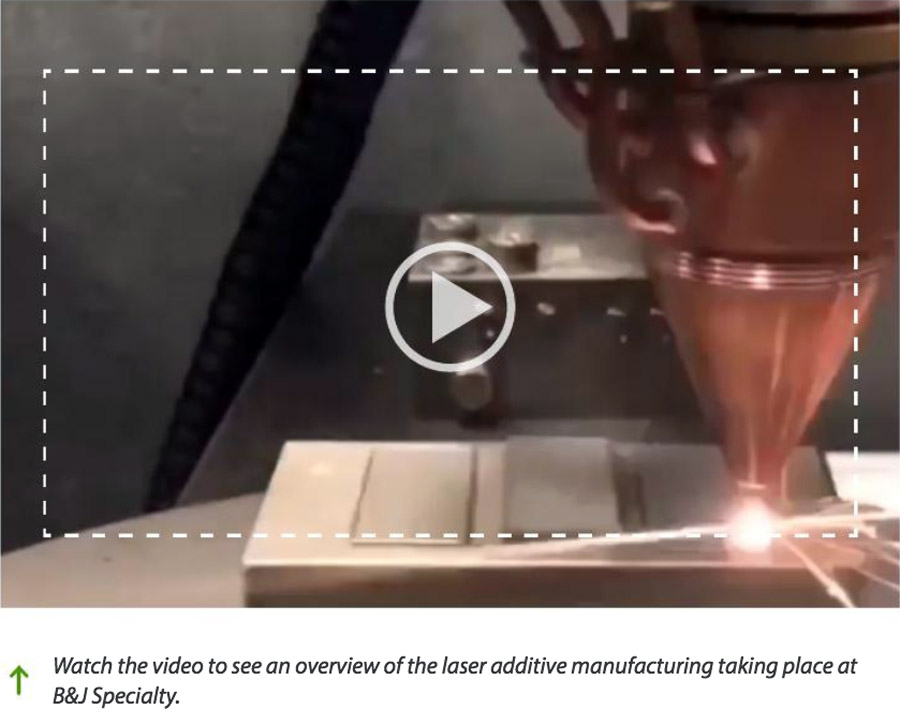 To anyone interested in going down this road, Benson offers some advice. The first tip is to pick up a copy of the software package Jigs and Fixtures for GrabCAD Print. It allows designers to test different material densities, optimize build times, and add or subtract material from part designs and understand the effects of those actions. He also suggests choosing a 3-D printing partner that can support you after the sale, preferably one with experience in your particular kind of manufacturing.

“It’s not difficult to learn how to operate a 3-D printer, but it definitely requires you to ‘think additively,’” he says. “One thing that we’ve seen work really well is to engage with a service bureau like Stratasys Direct Mfg. for your first few projects. They have people with years of experience who know design for additive manufacturing inside and out. As long as you can communicate your design intent, they have engineers who can then translate that and implement the design for additive. And after you see that process a few times, you can then start thinking that way yourself.” 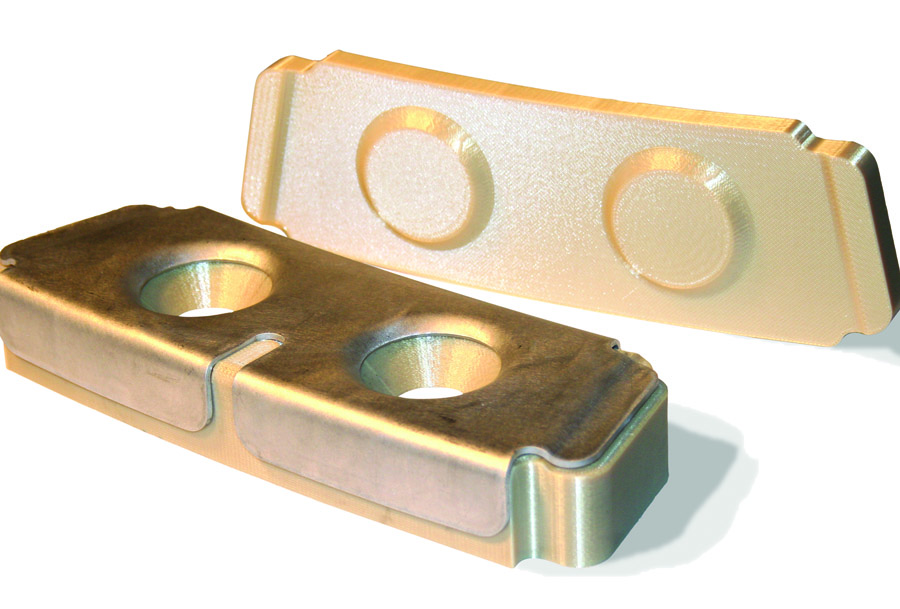 A structural aircraft component that was hydroformed on an FDM-printed (fused deposition modeling) form block. The intensifier is in the rear. 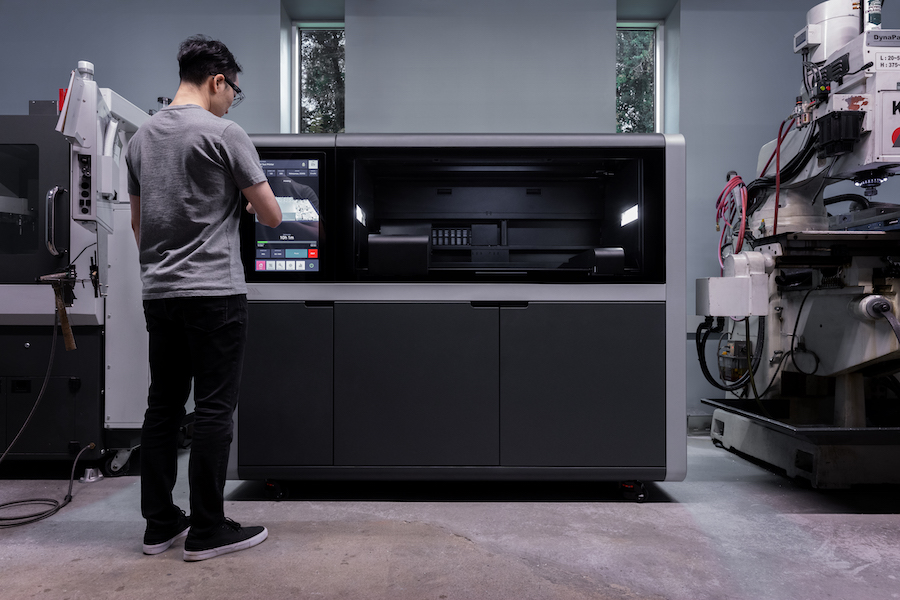 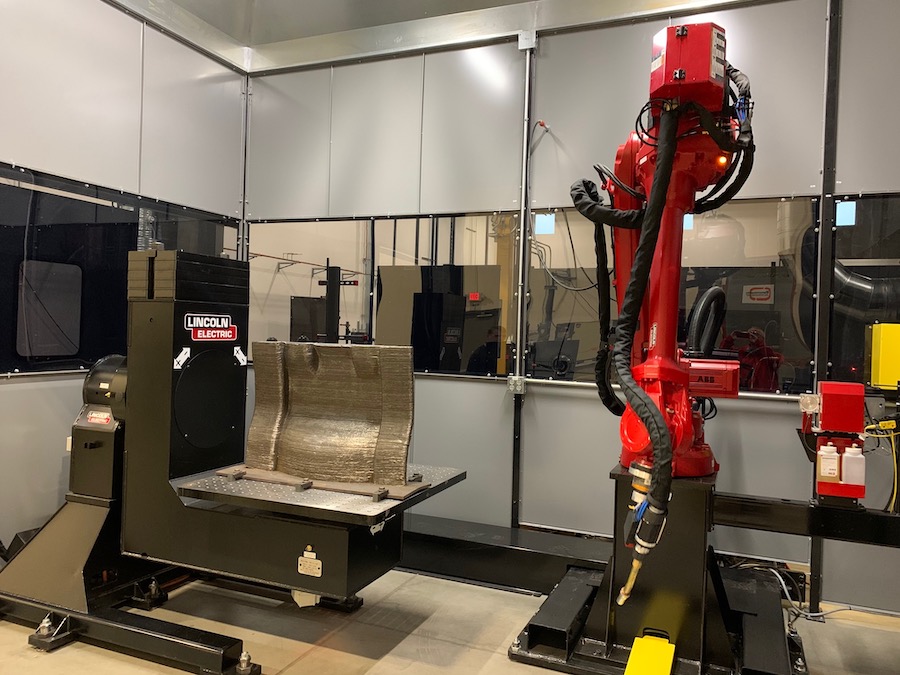 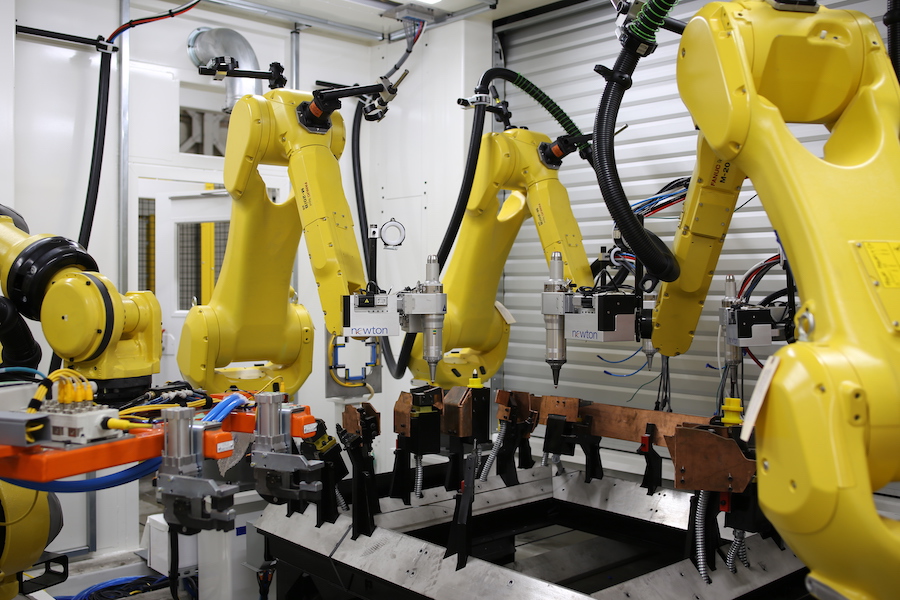