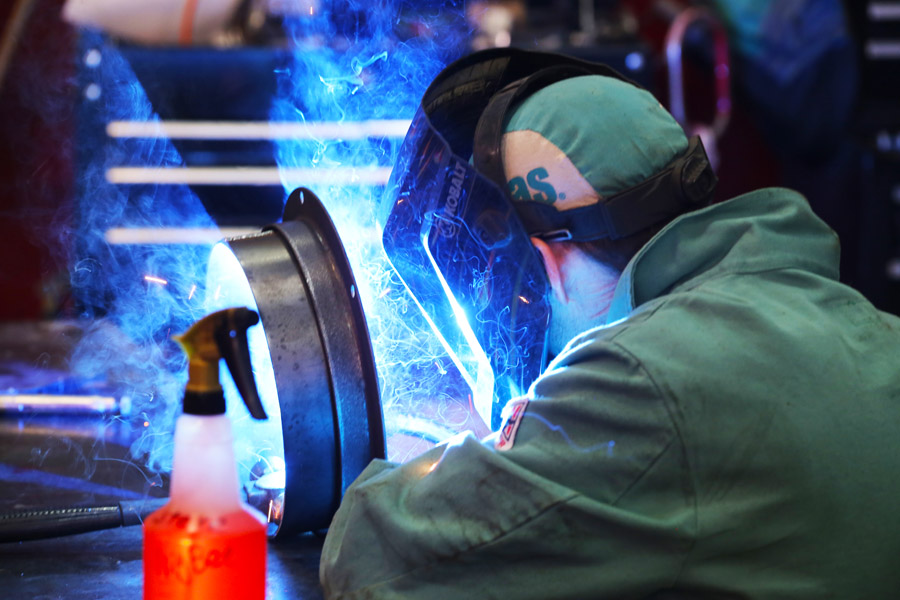 When you look at the OSHA occupational exposure limit table for substances, it’s hard to figure out what it is telling you. What’s the difference between a PEL, a STEL and a TWA? Why are so many different measurements listed?

Let’s break it down into something a little more reasonable. First though, some definitions:

PEL: Permissible exposure limit – the basic limit for how much exposure is allowed.

TWA: Time-weighted average – a measurement of average exposure over a certain time period, usually given as 8 hours.

Ceiling limit: The maximum exposure limit, which cannot be exceeded for any length of time. 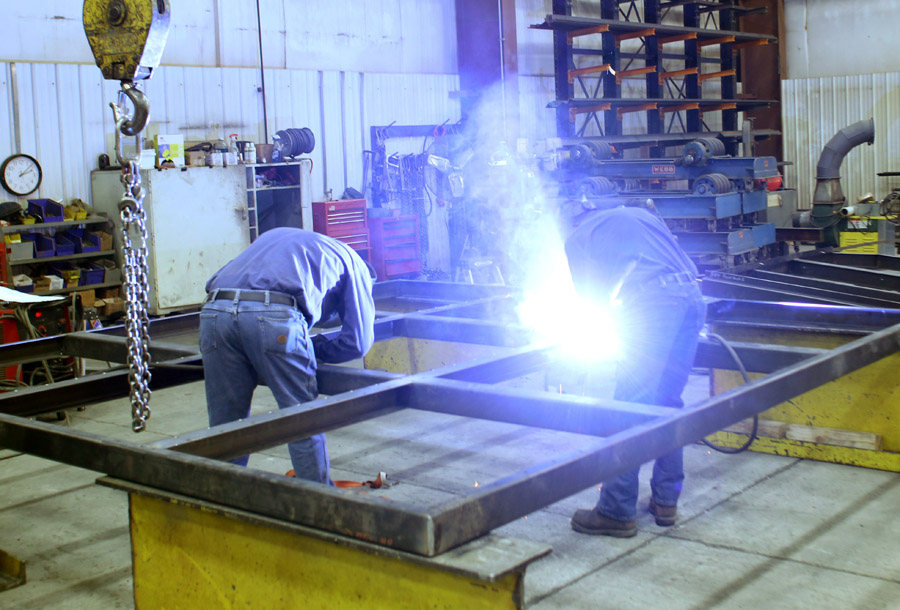 The ambient air needs to be clean so no welder’s average exposure during the day is too high.

Look at the tables

Let’s look at some examples in OSHA Annotated Table Z-1 to understand how to read the table.

For the first material listed (see Figure 1), the general limit is 200 parts per million (ppm), or 360 mg per cubic meter of air. The one that’s really important, though, is the (C) 25 ppm. This is a ceiling limit. A person is never allowed to be exposed to more than this number.

Not all materials have a set TWA or STEL, so those may not be listed in the table. The second material listed does have a listed STEL (ST): the highest level a person can be exposed to in a 15-min. period is 15 ppm.

A look at Figure 2, from OSHA Annotated Table Z-1, shows a common metal you might work with: aluminum. Just to make things more complicated, there is more than one kind of aluminum exposure. Aluminum metal exposure can be measured as total dust and as a respirable fraction. These are the particles that are miniscule and most dangerous to inhale. They are commonly found in welding or cutting applications.

For aluminum, the general PEL is 5 mg per cubic meter of air. Over an 8-hour shift, the average exposure can’t be more than that PEL. That means that during that shift, the exposure period might be less than the PEL sometimes, but higher other times. The average exposure over the whole shift is what’s being measured.

There’s no STEL or ceiling limit listed on this table for aluminum dust. So, for fun and excitement, let’s hop over to the OSHA Occupational Chemical Database and look up aluminum.

Now we get the full report, and it’s exciting stuff. It tells us there is no PEL-STEL for aluminum, nor is there a ceiling. This is because aluminum dust is not highly toxic (although it is highly combustible). OSHA has not declared a STEL for the maximum amount of aluminum dust you can be exposed to for a short time. This basically says that exposure to high levels of aluminum dust for short periods is not harmful, but high exposure over a long period of time might be.

For comparison, let’s go back to OSHA Annotated Table Z-1 and look at manganese, a metal that’s often found in weld fumes and other metalworking applications. Unlike aluminum, manganese is toxic and causes brain and nerve damage.

The PEL-ceiling for manganese dust is 5 mg per cubic meter of air (see Figure 3). Currently, OSHA is looking at new limits on this metal as recommended by NIOSH (the National Institute for Occupational Safety and Health; the research cousin of OSHA). NIOSH suggests a recommended exposure limit (REL) of 1 mg per cubic meter of air for an 8-hour TWA.

This means that while OSHA currently has a ceiling limit set at 5, it’s being recommended that no one be exposed to an average of more than 1 mg during 8 hours. NIOSH also recommends a STEL of 3 mg per cubic meter of air, so that over any 15-min. period, the amount should not exceed that.

It’s important to note that NIOSH can make recommendations, but the organization does not set regulations. The NIOSH recommended limit is based on the most current health research. If you are looking for the actual regulations, look in the OSHA column, not the NIOSH column on OSHA Annotated Table Z-1. 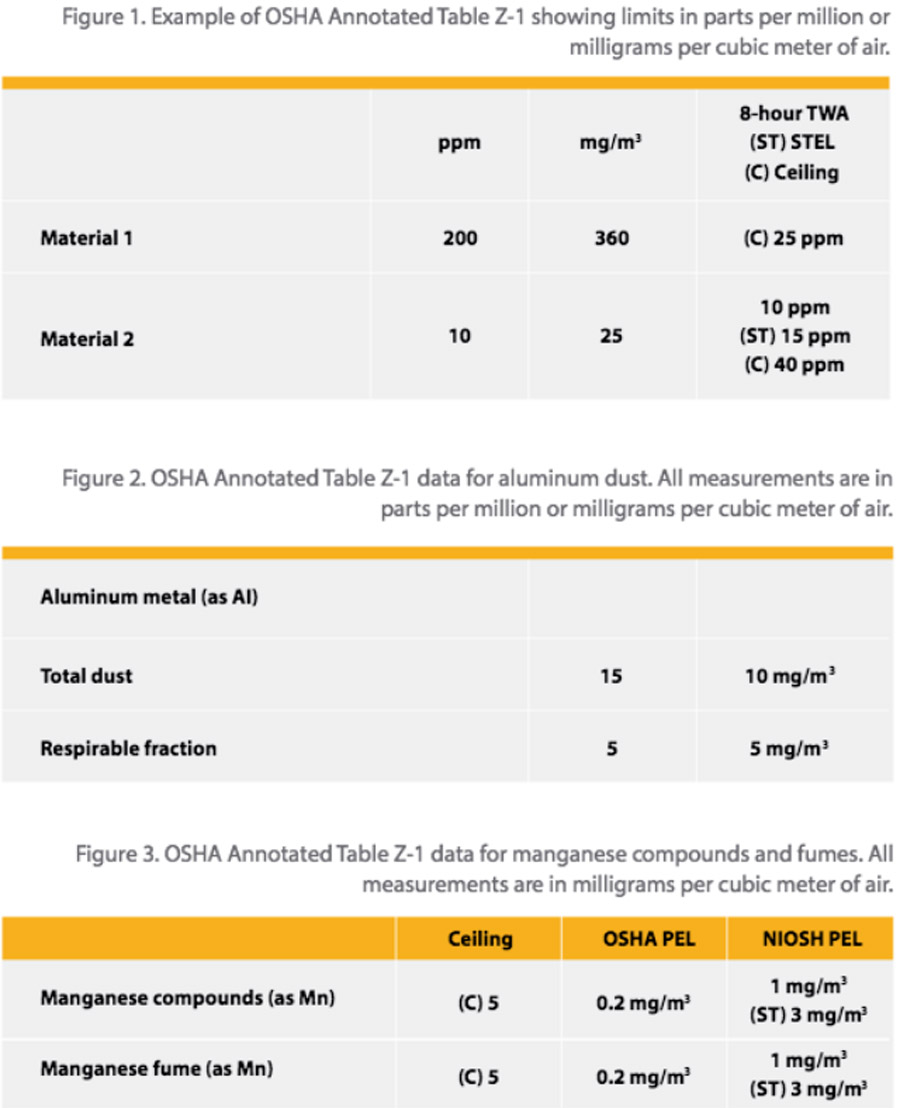 Why does manganese have a ceiling limit and aluminum doesn’t? Because the health hazards of short-term and long-term exposure to manganese have been researched, and it doesn’t take massive exposure to cause harm, especially over time.

Aluminum is not something you should breathe a lot of, and OSHA has decided that over the course of a day your average exposure can’t be more than 5 mg per cubic meter of air. It hasn’t specified a ceiling limit. This means that if your aluminum exposure was very low for most of the day but really high for a short time, you would still be within the average exposure limit.

This means you may need different methods of control for these two metals. For example, if you have welders working on materials containing manganese, they are very close to the fumes. They could be over the ceiling limit. The best solution is often a fume collection system with arms or hoods that go directly over the welders to pull fumes away.

If you have dust being produced all over a work area, you need to keep the air clean so no one’s average exposure during the day is too high. For this situation, an ambient dust and fume collection system will keep overall levels consistently low.

There can be a flat PEL, which is just a basic permissible exposure limit. OSHA typically uses a TWA-PEL to indicate that during a day, someone may be exposed to concentrations higher and lower than the flat PEL. What’s important is that this is an average exposure over the whole work day.

When the material has a STEL, it’s a limit you can’t go over for more than 15 min. No matter the person’s average exposure over the day, the STEL isn’t allowed to be exceeded for more than that 15 min. This is a number you need to watch, because someone working on a job may not realize when 15 min. has passed.

When the material has a ceiling limit, that’s the maximum level you are allowed to hit and you can’t go past it for any length of time. Even if the average exposure during the day (a TWA PEL) is within the safe range, at no time can the level ever exceed the ceiling limit.

When OSHA sets a ceiling limit for a substance, it usually means that it is dangerous and that being exposed to enough of it, even for a very short time, could cause serious harm. These are materials that need some serious respect, and your control plan for them needs to be very thorough.

NIOSH makes recommendations, but not rules. NIOSH recommendations are based on health research and are usually lower than OSHA regulations. They are not a requirement, but they are important to consider.

Tables for these materials are available from OSHA online, but they are only useful if you know what the technical jargon means in real-life terms. When you know the rules for the materials you’re working with, you know what kind of air filtration system or other control methods you need.