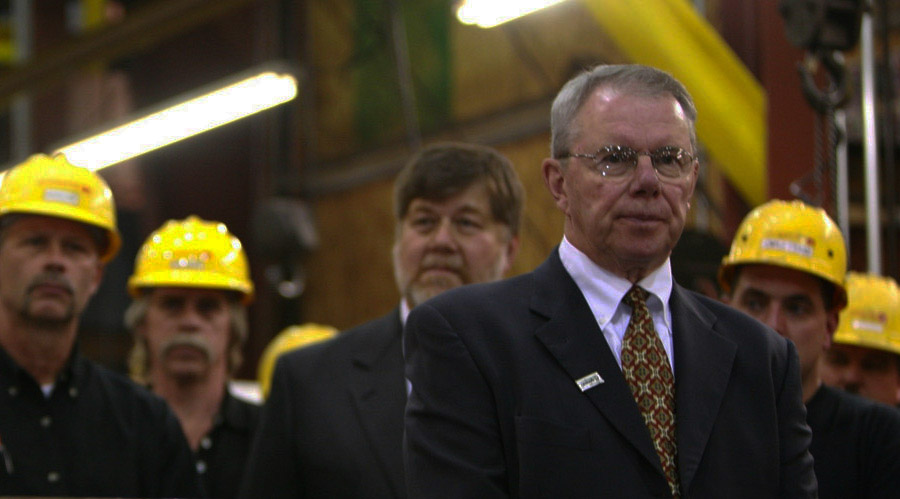 It’s safe to say that most folks wouldn’t consider a holiday weekend as a pivotal point in a company’s legacy, but Jerry Leary isn’t “most folks.” The now-retired president and CEO took Koike Aronson Inc., a failing company, and transformed it into one of the most successful cutting machine and welding positioner manufacturers today. When asked to recall the exact turning point in Koike Aronson’s rocky history, Jerry Leary didn’t hesitate with his response.

“It was Labor Day weekend 2003 when everything we had done over the past 13 or 14 months started rolling,” he says. “Over the weekend, Caterpillar faxed in an order for six figures with a 30 percent deposit. From that moment on, we never looked back.”

When Leary took the helm at Koike Aronson a little over a year before that unforgettable weekend, the company was flailing. Back then, it wouldn’t have been too far fetched to say it was at death’s door. When describing the situation, Leary, who retired early this year, doesn’t mince his words.

“The Japanese company, Koike Sanso Kogyo Co. Ltd., had owned Koike Aronson since 1985 and had only made money one or two years,” Leary says. “By 2002, when I came on board, they had a negative net shareholders equity of more than $20 million, and they had an underfunded pension fund. Leading up to Labor Day weekend, I was worried that we weren’t going to make payroll. It was scary.”

Considering the dire scenario, it’s nearly unbelievable that Koike Aronson could achieve such a dramatic transformation. But it did so thanks to Leary. Today, the company is booming. It’s a leader in the manufacture of cutting machines, welding positioning equipment, portable cutting/welding machines and gas apparatus. 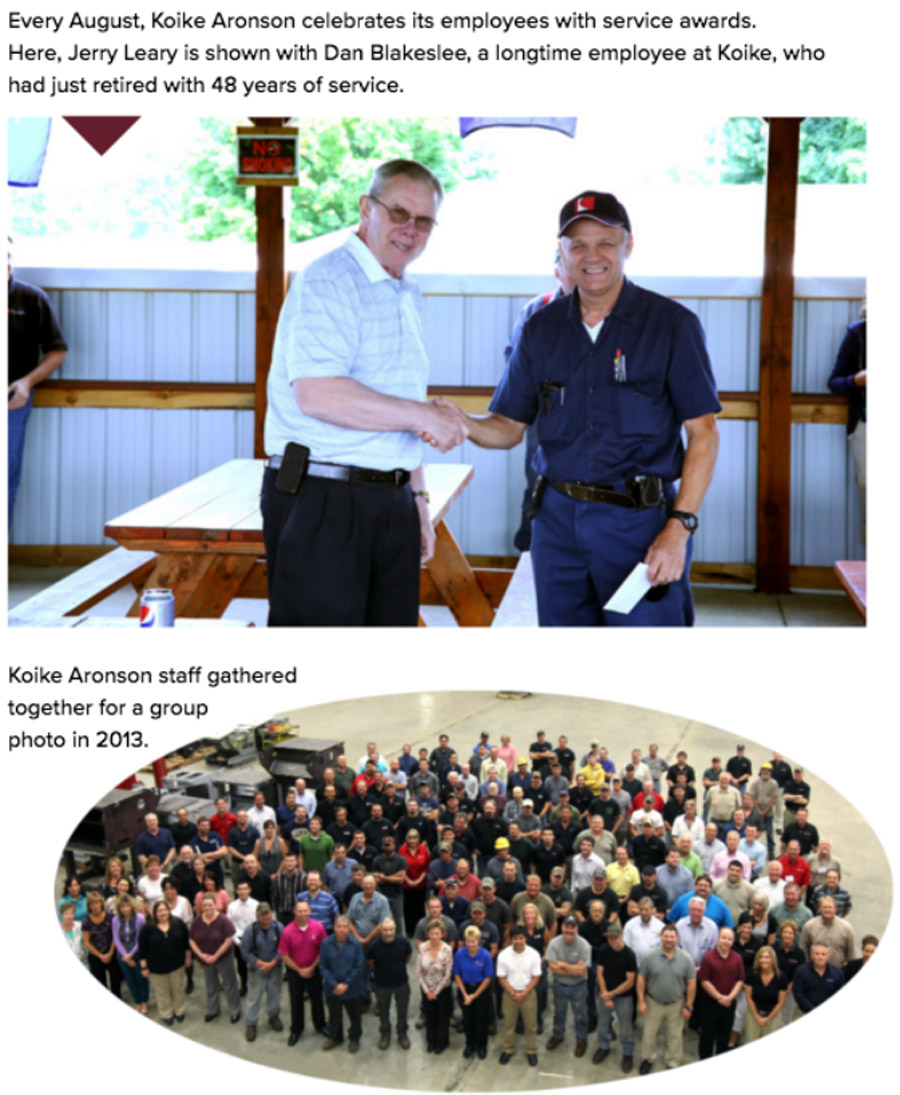 The rebirth of Koike Aronson was centered around several tactics that Leary implemented when he was given the titles of president and CEO. Many of those tactics, Leary humbly reveals, were garnered from the three mentors he says helped shape his professional career.

Leary’s strategy for bringing the company back from the brink included shuttering unprofitable offices, transitioning from a direct sales model to an independent manufacturer’s rep model, addressing a lack of customer service, improving the company’s product distribution system and implementing an employee incentive program. The roots of those decisions were planted as far back as his first job out of college.

After Leary graduated from Fairfield University in 1966 with a degree in psychology, he landed a position at United Shoe Machinery, which later became USM Corp., a global manufacturer of shoemaking and industrial equipment. His initial interview was nothing like he expected, but then again, neither was his tenure there.

“The guy who hired me was a tough old Irish guy named Clem O’Brien,” Leary recalls. “He was smoking a cigar during my interview. He hired me and I stayed there for nine years. During those years, he made sure that I was put on a right tack so that I could go to graduate school and get my MBA. I said that I didn’t even have a business degree, but that didn’t seem to faze him.”

During his career at USM, O’Brien took Leary under his wing. He taught him the important lessons of liability just as USM was signing unprecedented contracts with some of the world’s biggest businesses – Anheuser Busch and Coca-Cola – to develop the ring and rivet process for pop-top beverage cans.

“USM signed a year’s agreement with Anheuser Busch that wouldn’t allow anyone else in the beer industry to have the design for a year after they implemented the system, and the same went for Coke with other soft-drink makers,” Leary says. “They were willing to pay additional costs because of the liability involved with the old-style cans where people would cut themselves trying to open them. I learned back then what liability was all about and how a business could justify adding equipment at an additional cost. It was an eye opener for me.”

After receiving his MBA in 1976, USM was sold and Leary found himself outside of Boston at a company called Hersey Products Inc. that manufactured water meters and valves for municipalities. Leary had only been there for six months when the new president, Anson Fyler, saw something special in the still young businessman.

“He made sure I was involved not only in the sales side of things, but also with marketing, manufacturing, how to work with two different unions and how to walk the factory floor so that the people knew you and you knew them,” Leary says.

Fyler was also the one that introduced Leary to the idea of an independent manufacturer’s rep structure, which Fyler was interested in implementing at Hersey Products.

“It took a year for the company to fully convert everyone, but it was a great lesson for me to learn,” Leary says. “I made a lot of good relationships in that industry because of the reps that I brought on. I was there for seven years, but Anson knew I was looking for something else.”

Unsurprisingly, Leary didn’t have to look far. He was quickly recruited to work for Amtrol Inc., a manufacturer of heating and well water expansion tanks, water heaters, pumps and other flow equipment. The company was three times the size of Hersey, but Leary was ready for the challenge.

Again, his employer took note. Dave Beretta, the company’s president and vice chairman, would be the mentor to open Leary’s eyes to less tangible business ideas, such as strategic planning and thinking outside of the box.

His understanding of the business world flourished under Beretta where he was also introduced to the concept of employee incentive programs, acquisitions and the push to take a company from private to public. Eventually, he reached the senior vice president role. His 12 years with Amtrol came to a close, however, after Beretta passed away and the business changed hands.

After Amtrol, Leary served as vice president and general manager for Super Valve Co. and later at Mueller Industries Engineered Products group, putting the lessons he learned from his mentors to work. In 2002, at Koike Aronson, he would again demonstrate all he’d learned throughout the years.

His first order of business was to close any offices that had been unprofitable for the company. And that was just the beginning. Restructuring the company’s manufacturing facilities was also a necessity. The manufacturing workflow was choppy, meaning the existing building would require a total revamp. That, too, however, was just a drop in the bucket for the work that had to be done.

“The next thing we did was change from a system of direct sales people to independent manufacturer’s reps – just as we’d done at Hersey,” Leary explains. “After Hersey, I’d worked with both sales models, but found that I am more comfortable with reps. One essential benefit was that we didn’t have to pay the reps until there was a sale. Another benefit was it addressed a lack of coverage. At first, Koike Aronson only had 10 direct people covering North and South America. Today, we’re up to 15 or 16 rep firms and more than 60 people in North and South America.”

As Leary was turning the company’s sales model on its head, he also had to tackle a frustrating lack of customer service. He described the customer service department as unorganized and dysfunctional. The remedy included hiring new customer service representatives, bringing in a training company and essentially starting from scratch.

“As if that weren’t enough, we had to change how we handled the distribution of our cutting and welding products,” Leary says. “So, we focused on the major distributors who had supported us over the years. We made them our main distributors and had sales objectives for them. Anyone who didn’t qualify to a certain level was considered a B-level distributor. 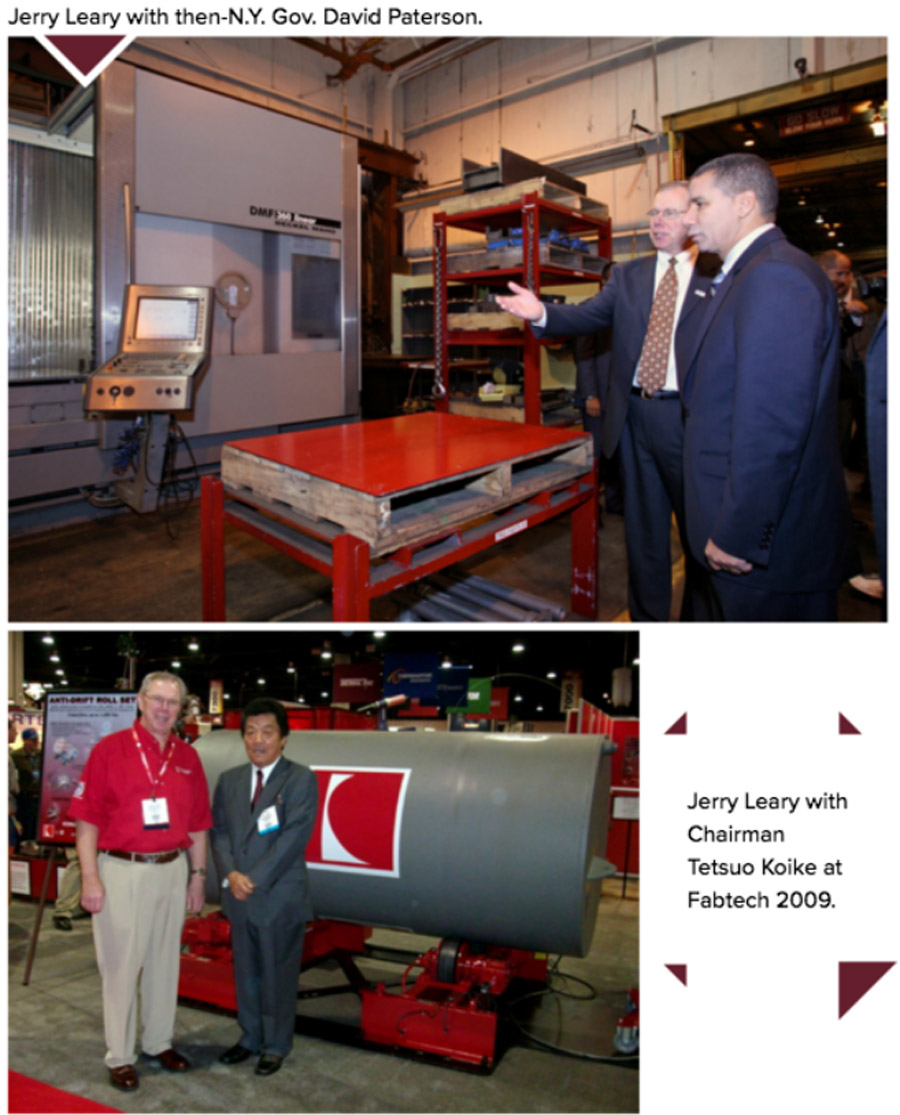 The difficulties were plentiful at Koike Aronson, but Leary was steadfast. Perhaps the biggest transformation came from reorganizing the entire company from a traditional pyramid organization to a matrix organization. It required establishing three distinct business units to handle the company’s three distinct product lines. Each business unit was managed independently from the next, yet they all shared the company’s human resources, operations, engineering and sales departments.

“We did something that was new to the industry,” Leary says. “We charged each business unit to be responsible for the profitability of their own products – from birth to death. Learning how to properly manage a business unit empowered the employees, and I think they’ll continue to benefit from that.”

The employees at Koike Aronson were also given more ownership of their jobs when Leary implemented an MBO and incentive program, not too far removed from the ones that had worked at Amtrol and Superior Valve. In doing so, the employees at Koike weren’t in the dark in terms of their standing in the company versus their objectives.

“We base their salary increases and bonuses on attaining an annual target operating income and their achievements in meeting their objectives,” Leary explains. “Everyone can earn up to a maximum 20 percent of their annual income based on their given objectives. I was always out in front of them, letting them know everything – where we stand, what changes we made, what changes we’re going to make.

With those tactics, Leary led the company from declining sales, losses and high debt to growth and profitability – all within 20 months. After six years, he’d tripled Koike Aronson’s business, eventually catapulting the company into one of the most profitable entities within the worldwide Koike Group.

“Eventually we got out from under the defined pension plan and started making money the first quarter of 2004,” Leary says. “And from then on, we kept growing the business by adding people, new products, new systems and profitability.”

So in addition to Koike Aronson’s team of empowered employees, its expanded sales coverage and its world-class customer service department, which Leary says is the best in the fabricating industry, Leary established a distributors council. Each year, those seven to 10 distributors gather together to outline the company’s goals and, from there, come up with recommendations for how to improve business.

“This led us to modernize and upgrade our quote system,” Leary says. “It also resulted in various successful sales approaches and product lines. The distributor council truly helped shape the company into what it is today.”

As is Leary’s habit, he often attributes company successes to the greater collective. Of all of Leary’s successes, he still goes back to his original mentors to give them credit as well as all of the dedicated employees and colleagues that he’s worked with over the years.

“There were a lot of things implemented to improve the situation at Koike Aronson, but really, I couldn’t have done any of it without the help of the people at the company who were willing to change,” he says. “These were people who had been with the company for a very long time and had become used to failure. They were frustrated, but they accepted change, and so we worked together to create a better company.”