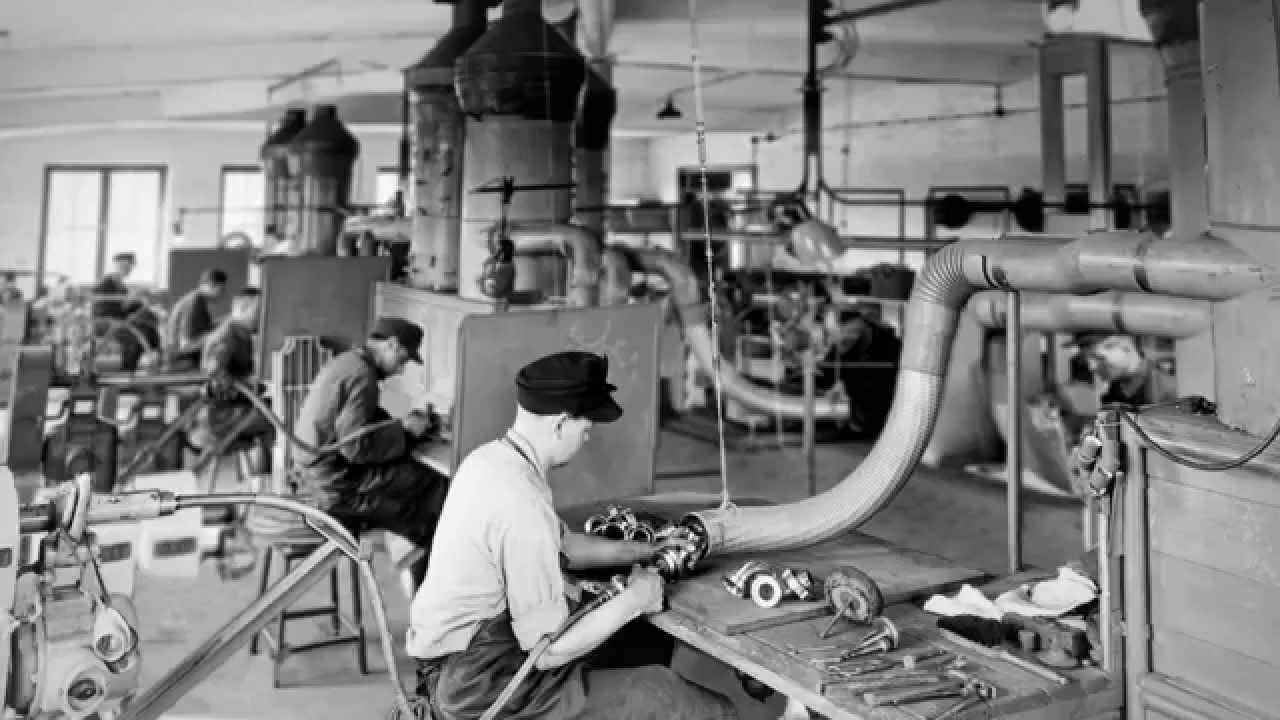 As each day passes, the leading minds in engineering are making significant advances in fabricating technology. And the use of lasers might be one of the most exciting aspects of the fabricating world today because of the capabilities lasers afford manufacturers.

The speed in which advancements are occurring also plays into the thrill that the laser brings to the table. It’s nearly inconceivable, however, for someone outside of the research community to fully understand the current strides that are being made in laser fabricating.

For the layman who truly wants to understand the contemporary laser-cutting landscape, the best place to start is the beginning. By looking back at the early achievements in laser innovation, so much can be understood in regard to what’s happening today. By doing so, one can also get a better feel for where the technology might be headed.

And that’s exactly why the team at Shop Floor Lasers is so excited about our new series, “The Titans of the Industry.” Throughout 2015, we’ll be highlighting the men and women that have shaped the laser industry. And as far as we’re concerned, it makes perfect sense to start with Dr. Berthold Leibinger, who some might say introduced the laser to his home country of Germany.

The editors go on to explain that the award is “one of the highest remunerated international innovation prizes for laser technology. Three prizes are handed out with a total of €60,000, none of it earmarked for a specific purpose.”

In fact, one of Dr. Leibinger’s venerable award winners from 2012 will be highlighted in an upcoming issue. TeraDiode, a manufacturer of direct diodes and headed up by MIT graduates, earned its place in the short list of recipients thanks to its work on a concept for direct-diode lasers with high brightness called “wavelength beam combining.” Other winners have included the BMW Group as well as Robert Bosch GmbH.

An innovator is born

Looking back at Leibinger’s career, it’s easy to understand why one of the most prestigious awards in lasers was given his namesake. Even in his early years, Leibinger had his pulse on the burgeoning laser industry.

Born in 1930 in southern Germany, Leibinger – the man who would eventually propel Trumpf into the forefront of innovation – was destined to be a leader for the industry. For starters, his hometown of Stuttgart was just an hour’s drive from Albert Einstein’s birthplace. The region has long since been known as a high-tech hub for Europe.

In 1917, Einstein had published his proof of light amplification, which would later be applied to physicist Theodore Harold Maiman’s work when developing the first functioning laser in 1960.

A decade prior to Maiman’s achievement, however, Leibinger had just graduated with abitur – a designation given to students upon the passing of their final exams in secondary school. In Germany and a handful of other European countries, an abitur is often followed by an apprenticeship and so was the case for Leibinger. Not surprisingly, his took place at Trumpf.

During those days – the early 1950s – Trumpf had just surpassed the $1 million milestone in sales and was making a name for itself as the leader in stationary nibbling machines. Prior to laser cutting and other modern cutting devices, nibbling machines were the go-to method for cutting contours in metal.

From there and back again

After studying mechanical engineering at the Stuttgart Technical University, Leibinger returned to Trumpf and landed a permanent job as a development engineer. As Leibinger was getting his career off the ground, researchers in the United States were working to produce a tool that could use heat to cut curves in thin sheet metal.

With so much development happening in the United States, Leibinger was fortunate to once again find himself just a short trip from the center of laser innovation. From 1958 to 1961 he was living in Ohio and serving as the development engineer at Cincinnati Milling Machines, known as one of the largest builders of milling equipment.

Western Electric, which would later take credit for producing the first laser cutting equipment, established its Engineering Research Center near Princeton, N.J., in 1958. There, more than 400 researchers and engineers were developing various manufacturing technologies, including the application of lasers for industrial processes.

After working in the United States for three years, however, Leibinger returned to Germany in 1961 to manage Trumpf’s assembly department. By 1966, he became a partner in the company and its chief technical officer. By 1968, he had developed the first contour nibbling machine tool featuring a numerical control. Across the pond, research continued.

According to an article published in the German magazine Laser Technik Journal, “One of Trumpf’s representatives in America predicted that the laser would replace nibbling entirely.” After pondering this new report, Leibinger “then devoted intense interest to laser technology and the options it offered.”

At that time, Trumpf was known as the “Nibbler King,” referring to the stationary nibbling equipment that had cemented the company’s recognition as a global player in the metal fabricating world. Despite the rumors, lasers had not yet fully come into maturity. Maiman himself had mentioned that the laser was “a solution in search of a problem.”

Trumpf, with its nibbler, however, saw its sales exceed $10 million USD by the late 1960s. At that same time, the company was gearing up to establish Trumpf Inc., its first subsidiary in the United States.

In the United States, in the midst of the uncertainty voiced by Maiman and others, electrical engineer and physicist C. Kumar N. Patel had developed the CO2 laser, which was considered a major step toward using the laser in industrial manufacturing. Leibinger considered Patel’s achievement as yet another reason to pursue the technology as a new tool for Trumpf. 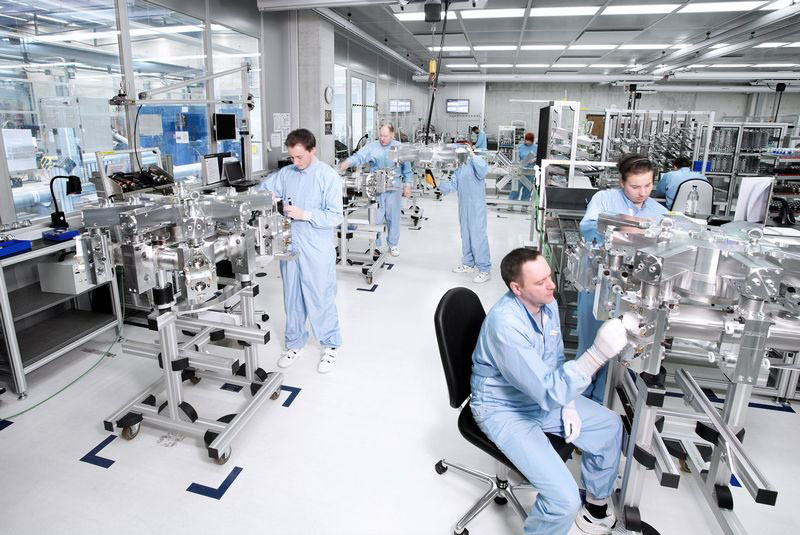 Today, Trumpf Inc. is the company’s second-largest location as well as one of the largest manufacturers of fabricating machinery in the United States. Shortly after it was established, Leibinger along with Hugo Schwarz assumed ownership of the parent company Trumpf in 1972.

With Leibinger at the helm and innovation on his mind, Trumpf would grow like never before. Leibinger’s contour nibbling machine tool with numerical control enabled “fully automatic work at the machine, right down to tool changes, for the very first time,” explained the editors at Trumpf.

“All the information required to process sheet metal [could be] stored on perforated computer tape. The Trumatic 20 caused a sensation at the 11th European Machine Tool Exhibition in Paris.”

In Schramberg, Germany, the Carl Haas company was working on its own sensation. It was working toward a way to better produce springs for clocks. So yet again, cutting-edge research in the laser field was happening right in Leibinger’s backyard. Because of the precision required, lasers looked to be a good option to incorporate into the welding process as they would not directly touch the pieces being worked on.

In conjunction with Paul Seiler, one of the fathers of the modern-day laser, Carl Haas specially developed a solid-state laser to achieve the precision the clock springs required. This laser would prove unmatched for Carl Haas as well as for the manufacturing needs at Philips, which was seeing a major ramp-up in interest for its color television sets.

As the fabricating world made note of Haas’s new laser, so did Leibinger. After working with a company based in California to help Trumpf produce the firstever combined punch and laser machine with a 500-W CO2 laser, Leibinger was hungry for more. He needed a higher-powered laser that could reliably cut thicker materials.

In 1982, the researchers at the German Test and Research Institute for Aviation and Space Flight joined the efforts at Trumpf to develop a 900-W laser. With Trumpf’s release and along with the strides of others, lasers had finally arrived to the fabricating world.

Soon thereafter, Trumpf unveiled its own 1- and 1.5-kW laser, propelling the company into the position of a leader in laser-cutting. As Trumpf continued to solidify its role as a leader, Carl Haas was making inroads, as well. The company had created its own laser division, Haas Laser, and had released its study for an industrial 2-kW solid-state laser.

The study showed the industry the laser’s true viability as a tool for industrial production in large volumes. Leibinger was pleased with where Trumpf had come in the realm of CO2 lasers, but he also saw the importance of solid-state lasers. According to the article published in Laser Technik Journal, “Leibinger wanted and had to close this gap. And thus the next step appeared to be only logical.

“In 1992, Trumpf became a partner in Haas Laser and four years later folded the pioneer in solidstate lasers into the Trumpf parent company,” the article continued. “Paul Seiler, who headed up Haas Laser, continued to hold an executive post until his retirement in 2003.”

By 1993, thanks to all of the advancements that Trumpf had achieved over the years, Leibinger was able to guide the company toward a laser output of 12 kW. Trumpf, however, would not stop there. In the years to come, the company would further increase its lasers’ output to 20 kW.

Also in the years to come, Trumpf surpassed the $2 billion mark in worldwide sales and grew from a company of about 100 employees in 1939 to a company of more than 11,000 employees today. It is not hard to fathom that Leibinger’s drive and continued focus on lasers was what helped make Trumpf’s impressive growth a reality. In his autobiography, he refers to the laser as “the most important product of the Trumpf Group.”

In 2005, Leibinger’s daughter, Nicola Leibinger-Kammüller became chairwoman of the managing board while her brother, Peter, was appointed vice chairman of the Trumpf Group. Together, they ensure Leibinger’s strong commitment to advancing laser technology continues at Trumpf. Leibinger himself took a seat on the supervisory board, which he chaired until his retirement with Trumpf in 2012.

As a dedicated life-long learner, Leibinger received his doctorate degree in 2014 from the Faculty of Mechanical and Industrial Engineering at the Vienna University of Technology. Essentially, his commitment to innovation in the industry has never stopped. Since his initial apprenticeship with Trumpf 65 years ago, he has truly been and will forever be a titan of the industry.