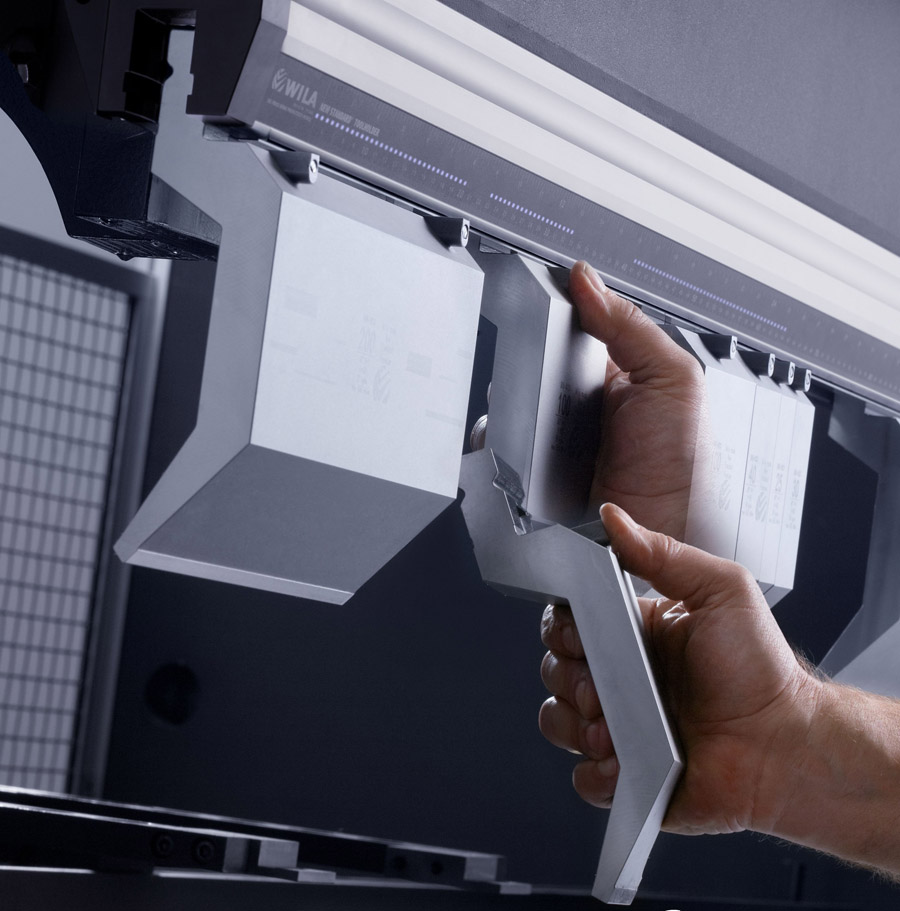 Anyone who’s actually done it knows that press brake setup is one of the most demanding tasks on the shop floor. Determining proper tonnage, K-factors and overbend amounts, optimizing tooling positions and gauging subsequent bends – these are just a few of the considerations that must be dealt with, never mind keeping one’s fingers out of harm’s way.

The task is made even more difficult as demands on the shop floor increase. Customers expect smaller lot sizes and shorter lead times, but still want competitive pricing. The finance manager is asking for lower inventory costs and WIP levels. The quality manager wants predictable processes and zero scrap, while the production manager is pushing for the best OEE possible.

And the person in the corner office? She wants all of the above, all at the same time.

Factor in the retiring journeymen and shortage of skilled replacements, and even the most unflappable of press brake operators needs an extended lunch break. 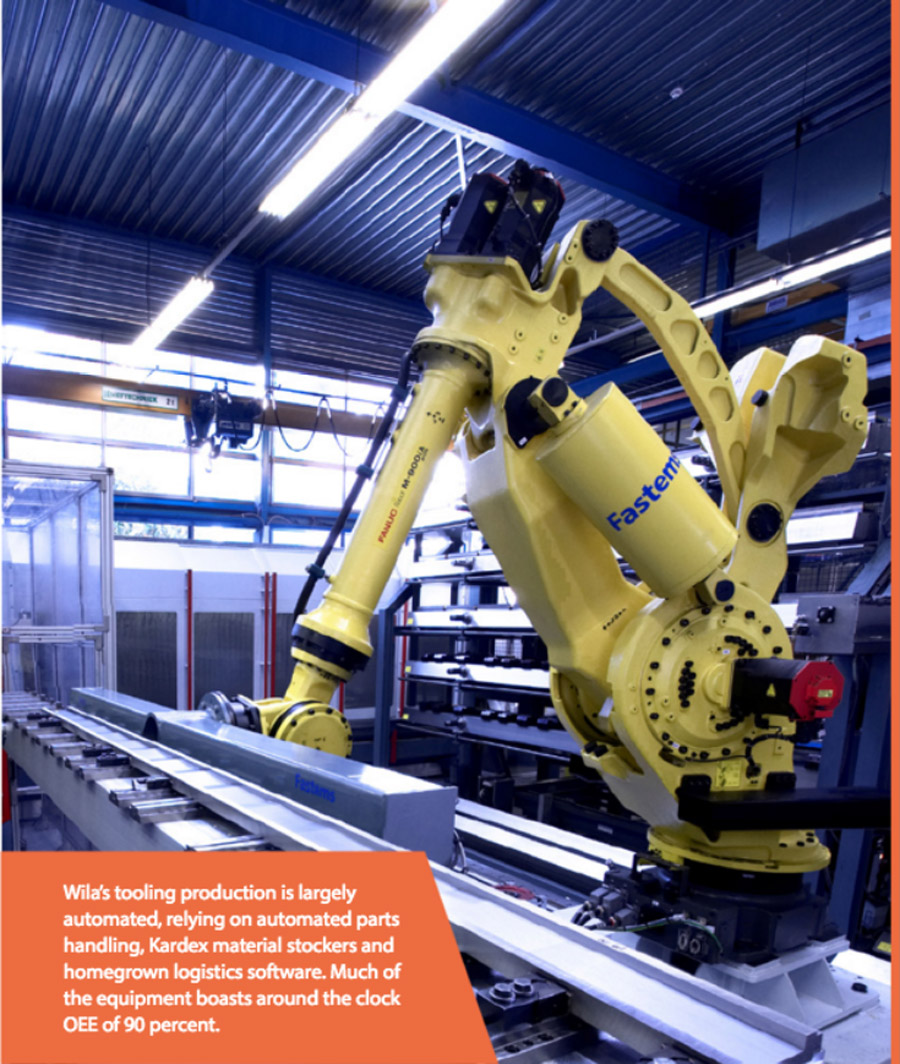 One way to appease at least some of these demands is the use of high-quality, quick-change press brake tooling, which reduces downtime due to the elimination of shimming and wrench turning.

Its extreme accuracy improves part quality and makes it possible to more easily accomplish complex, staged bending setups. But no matter how accurate the tooling or how fast it can be changed, setup still requires a knowledgeable, experienced press brake operator.

Hans Willemsen is working to change that. The managing director of Wila B.V., the Netherlands-based press brake tooling and automation manufacturer, Willemsen notes the company has been producing punches and dies for more than 80 years. Yet, it wasn’t until Wila management realized the industry needed more than good tooling that the company began its quantum shift toward tooling automation.

“For our customers to maintain a competitive edge, it was important that we address the actual bending process, especially the hours lost to setup,” Willemsen says. “Rather than continue to offer only punches and dies, we decided to develop a comprehensive tooling system and make those products part of it.”

Wila started by offering a push-button exchange tooling system, which Willemsen says saves substantial time compared with traditional bolt-in tooling. The company then built on that approach with a toolholding system that automatically clamps the tools, makes certain they’re seated properly and tells the machine controller where they are, a feat that’s accomplished via a closed-loop capacity-based electronic positioning system similar to a radio frequency ID (RFID) tag. From there, the tool identification and positioning system, or TIPS, was born. 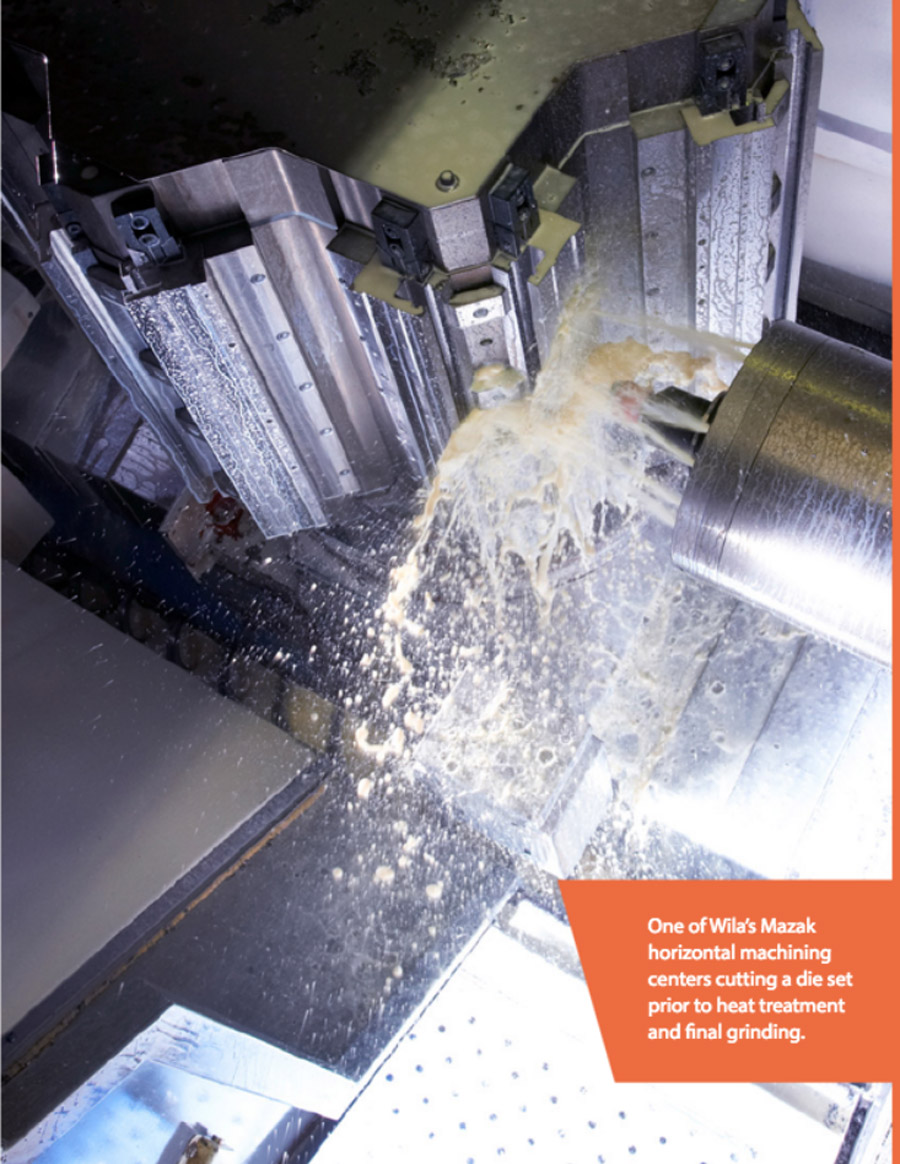 “TIPS identifies the tool to the controller, and the controller then looks at the press brake program and determines if the tool is in the correct position,” Willemsen says. “This makes it easy for even less-skilled operators to quickly and accurately set up a machine.”

Of course, if a less-skilled operator can perform a task, why not use a robot? Once Willemsen and his team were able to automatically determine the tool was in the right location, that’s exactly what they did.

They designed a gripper able to grab the tool from either side that works with any industrial robot. They then took it one step further by adding an integrated tool storage system, one that leverages TIPS to tell the robot where each tool is located.

“Some builders use teach mode to accomplish similar results, but it is time consuming and the operator must be fairly skilled to use it,” he says. “But with TIPS, any free location in the magazine can be used for tool storage. Once the system is switched on, every address is continuously broadcast, and the control knows where each tool in the cell is located.

“If you have a new setup, it’s just a matter of loading a new program,” he continues. “The robot then finds the required tools wherever they’re parked in the storage system, puts them in the brake and you’re free to start bending. It’s very easy to use and can even be done in a lights-out environment for those shops with automated parts handling.” 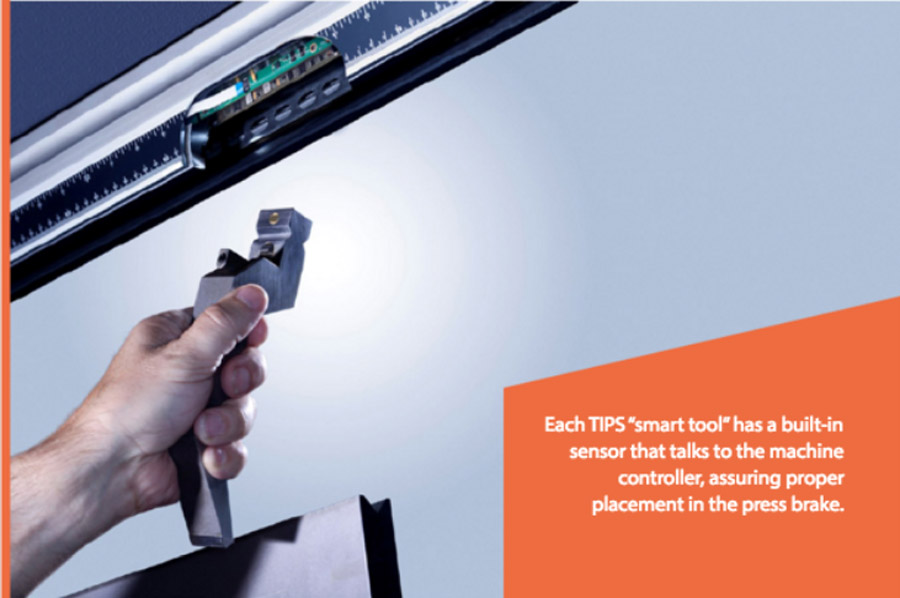 Willemsen’s push toward greater metalworking efficiency isn’t some overblown sales pitch. Since around 2000, he’s been practicing what he preaches, and the Wila factory at Goorseweg 7 in Lochem, the Netherlands, has become a shining (and continuously improving) example of a modern manufacturing plant.

Each machining and grinding cell is served by a Kardex material handling system and attended by robots that move workpieces in and out of the various CNC machine tools. These include a pair of Mazak horizontal machining centers, several pieces of Mägerle MFP precision grinding equipment, and in-house hardening and heat treatment furnaces.

Wila has also developed its own custom software system to manage production workflow, inventory and logistics.

Bear in mind this isn’t a high-production environment. Many of the jobs that flow across the Wila production floor are special orders and are run alongside Wila’s typical low-volume, high-value product mix.

Willemsen admits the job is made easier by the fact that most of the parts have similar sizes and shapes, but he also notes that each of the horizontals, for example, boasts 7,000 production hours each year with an average spindle utilization of 90 percent. 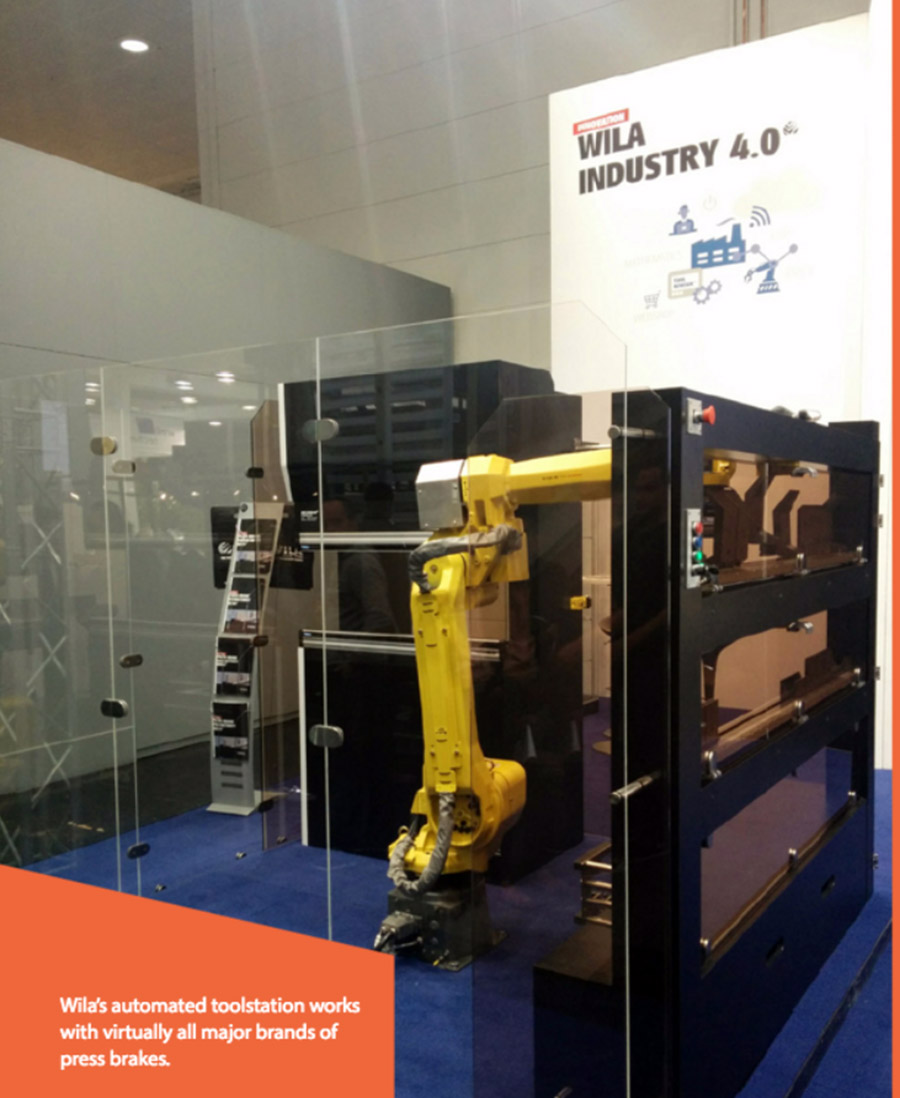 “I’m an entrepreneur who very much believes in an integrated manufacturing approach, one that includes the entire supply chain,” he says. “That’s why the flexibility, control and utilization we promote to our customers are a key part of our own internal processes.”

Though Wila’s goals might seem easier to achieve than those of a typical fabricating shop, where most anything that comes through the door has to be worked on, as parts become more and more complicated, so too does the tooling.

“Because of that, we have a variety of shapes to cover, each demanding high quality levels,” Willemsen says. “Unless we can tightly control our processes while simultaneously achieving high machine utilization, the capital investments we’ve made will not produce the desired returns. It’s a philosophy that, in my opinion, should apply to all manufacturers.” 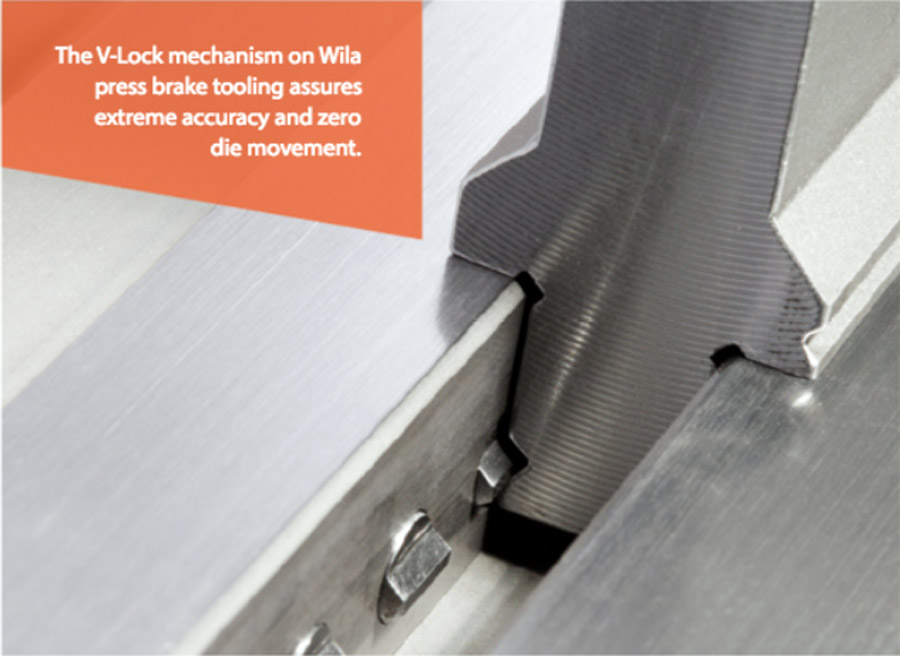 How is his philosophy playing out on this side of the Atlantic? According to Gunter Glocker, president of Wila USA, quite well, thank you.

“We introduced our quick-change tooling system in the mid-90s,” he says. “It took a few years for it to take off, but it’s gained a lot of traction in the last 10 years or so and has become a new standard in the industry. Most of the major press brake builders are offering it, either as their go-to system or as one of their preferred options.”

But quick-change is just part of the picture. There’s also automation. Like most in the tooling and machine tool industry, Glocker notes that the United States has traditionally trailed Europe in terms of adopting robotics and other progressive technologies. But that’s beginning to change, especially among larger shops and OEMs, which aren’t scared off by the relatively high price tag of an automatic tool change (ATC) system.

“For smaller job shops, it’s a sizeable investment, and so of course they’ve been a little slower to jump on board,” Glocker explains. “But shops small and large alike are beginning to realize that an automatic tool changer provides far greater flexibility and the ability to produce short run work efficiently. And the harder it becomes to find good operators and achieve consistent quality, the more people are going to adopt it. It’s definitely the direction the industry is taking.” 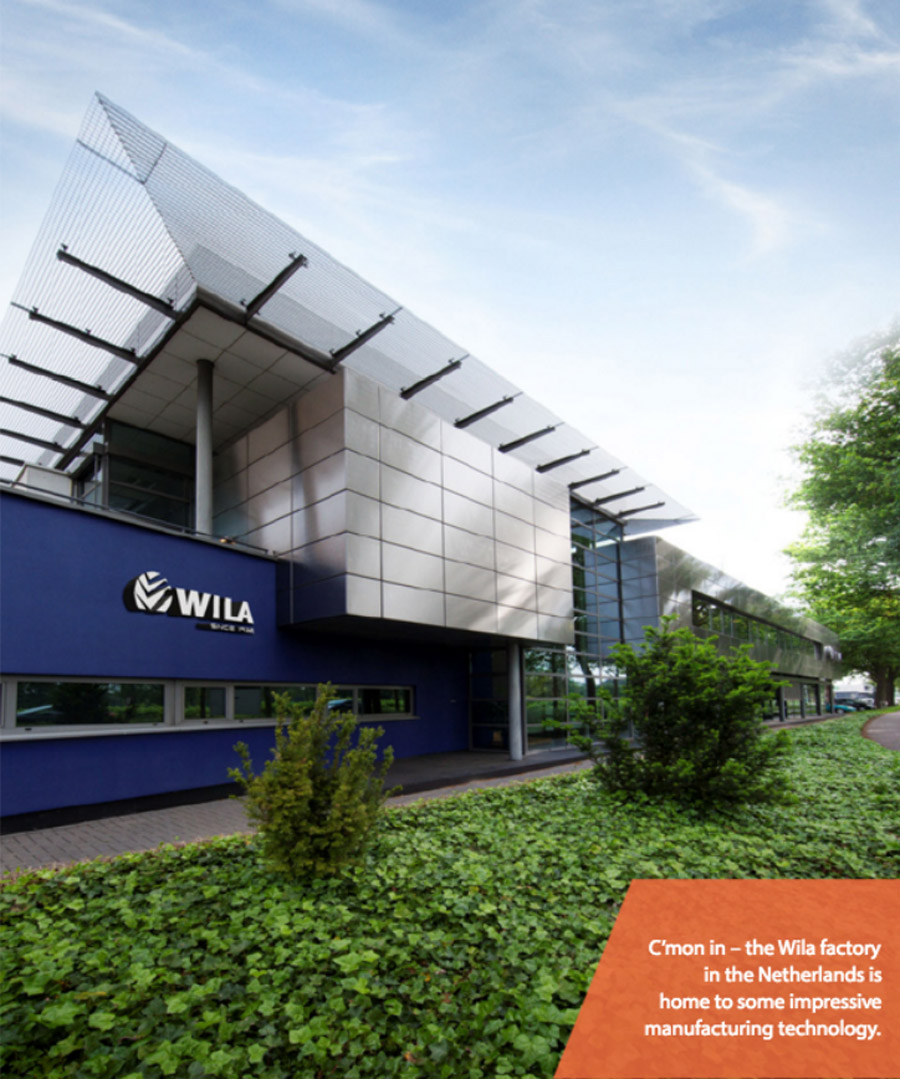 Vincent Iozzo agrees. A sales engineer for the TruBend Group at Trumpf Inc., he’s seen a big uptick in interest across most of the fabricating community, including job shops, aerospace manufacturers and OEMs.

“We introduced the Wila system as part of our TruBend Cell 7000 at the 2013 Fabtech, and have since installed 45 automated cells worldwide, and our 13th unit here in the United States just recently,” he explains.

The beauty of the system, according to Iozzo, is its ability to operate in a fully automated fashion. On the initial setup, the operator loads whatever tooling is needed anywhere on the press brake or in the tooling library.

Upon initiation of the production plan, the robot reads each tool location to determine where everything can be found, then looks at what’s needed for the next job and makes adjustments accordingly, automatically transitioning from job to job after that. “This is an important advancement for those customers looking for lights-out capabilities,” he says.

Don’t be concerned about the learning curve either. “The Trumpf BendMaster robot and the ToolMaster ATC pretty much take care of themselves, but there’s also an offline software system that’s responsible for managing the cell,” Iozzo says. “This requires a couple weeks of training, primarily to learn the new way of processing parts and scheduling jobs, but most customers are comfortable on their own within a month. It’s proven to be a really good system for us as well as our customers.” 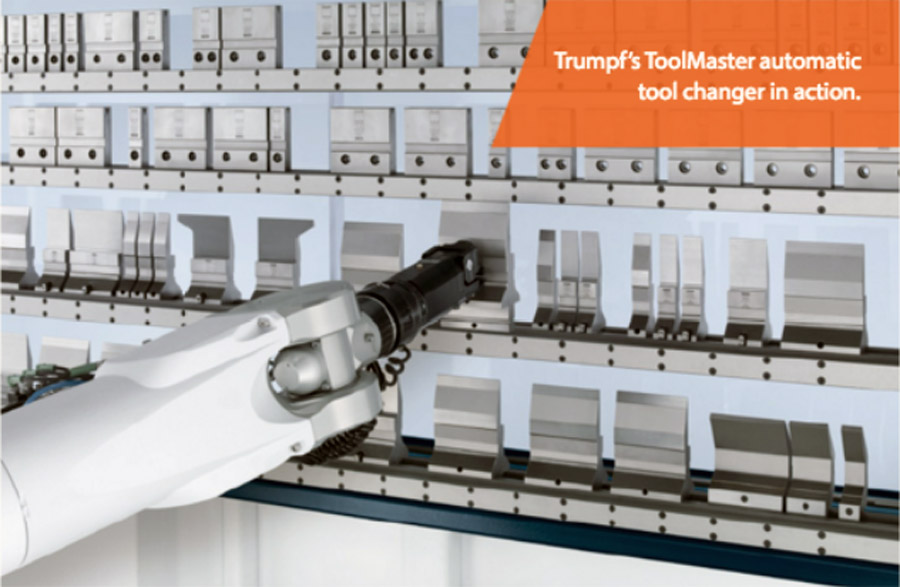 If you’re wondering about the ROI on a new, ATC-equipped press brake or the payback potential of retrofitting a Wila or comparable ATC system onto an existing machine, consider this: While it might cost twice as much as a traditional press brake, a single ATC will out-produce three to four standalone machines and their operators.

That’s according to Scott Ottens, bending product manager for Amada America Inc., who says it’s difficult to calculate ROI on an automated system without knowing a shop’s specific production situation, but quite often it’s a no-brainer.

“If you’re running the same part for days at a time, then you probably won’t see much benefit from faster setups,” he says. “But, if you’re spending more time on changeovers than you are making parts, then green-light time is likely pretty poor. For these shops, an ATC is definitely a good investment.”

It might be tough for those stuck in the old-fashioned rut of multiple setups per part to understand. After all, what’s wrong with stacks of in-process parts everywhere?

Because, even on complex parts, an ATC coupled with an offline programming system means setup is as simple as scanning a barcode and pressing cycle start. While the robot is busy loading tools, the operator has around two minutes to put the blanks on the cart and get ready to bend. And in most cases, the first part is good – no time wasted on adjustments, no scrap, just pure production of completed parts.

“Whether it’s using Amada’s ATC or Wila’s, we haven’t seen a setup longer than three minutes,” says Ottens. “You can just hammer out parts, and then boom, move on to the next job. And the training is minimal. I worked with some folks at a shop in Wisconsin last week that said they can take someone off the street and have them bending good parts in a few hours. That’s why automated setup is such a big deal.”