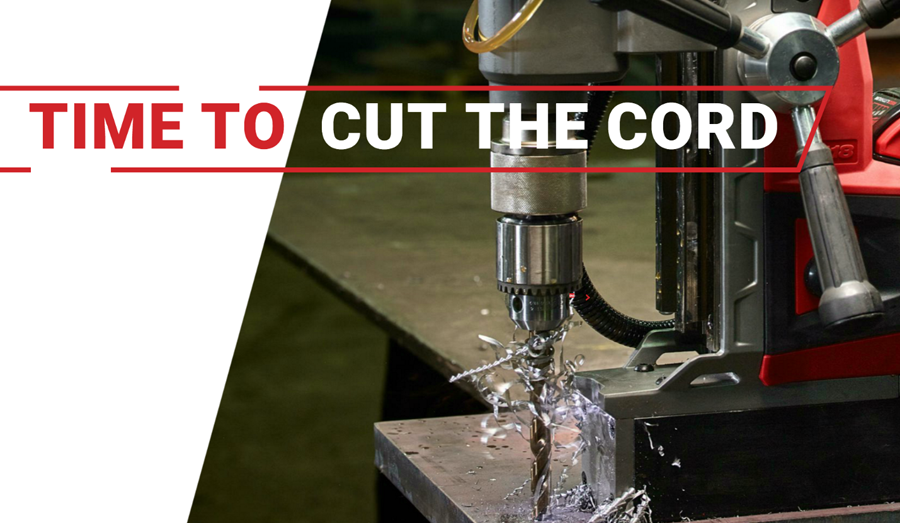 Interviewing for this article, I was talking to a Milwaukee representative when I mentioned that I had a corded Sawzall that I bought just a couple of years ago, and I commented about how powerful it was. “Have you tried our new M18 FUEL [cordless] Sawzall?” asked the rep. “It’ll blow your corded version out of the water!”

This was surprising, because my older cordless drills don’t have a lot of torque, and the recharging is frequent enough to be annoying (see sidebar). I didn’t see how a cordless power tool could out-power a corded tool. But later I spoke with Tim Truesdale, product manager, cordless, at Robert Bosch Tool Corp., and he confirmed it. “The torque issue has been solved,” he said. “In fact, I think that some have gone too far. They’re all competing to be the most powerful, and, in my opinion, some of the newest cordless drills and impact tools have a lot more power than they can really use.”

Truesdale is Bosch’s cordless expert, so his comment set us off to see what has happened. If you’ve been using cordless tools commercially, you probably know all about it. But if you’re using corded angle-head grinders, drills, impact tools or hand-held bandsaws (see this month’s cover), or if your only cordless tool is a ten-year-old drill motor, you may be as surprised as we were about how much cordless tools have advanced.

“Every tool maker in the business is trying to cut the cord,” says Truesdale. “And now we have the means to do it.” Besides the torque issue, the new tools also have much greater run time. “The latest lithium-ion batteries have about eight times the capacity of the batteries we all started with in this business,” said Truesdale. “Add that to advances in the control electronics, and we can build tools that deliver lots of power and that can run through a shift on one battery.” 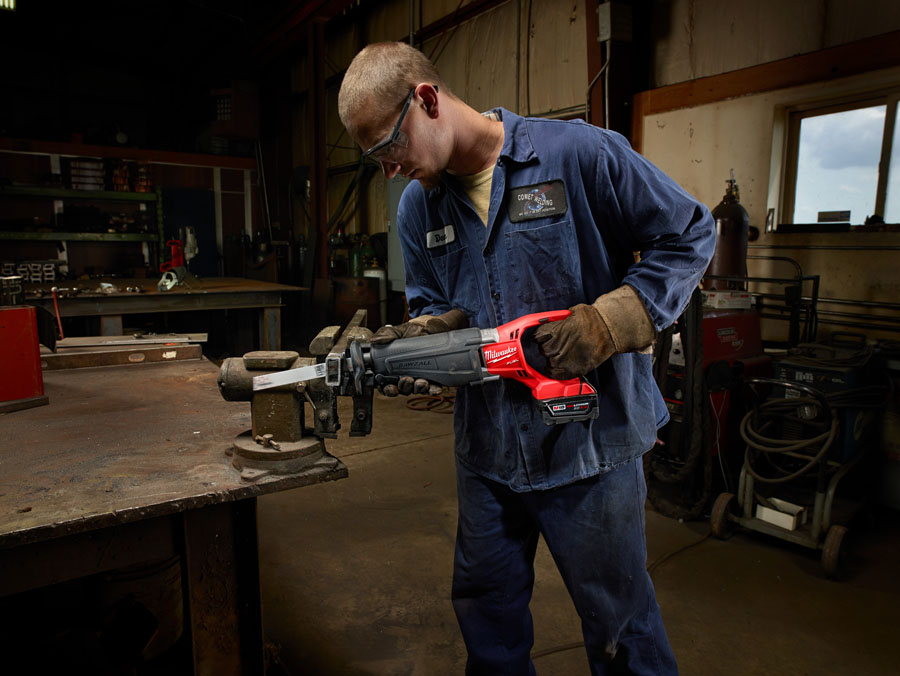 Milwaukee’s iconic Sawzall, widely used in metalworking as a replacement for a hand hacksaw, is at least as powerful in its cordless version as the corded version, says the company.

The big tradeoff now concerns the tools’ weight. The motors are more powerful, and there is an effort to keep their weight within bounds. There is a lot of competitive palaver on the motors, too, as some manufacturers point to the higher torque at low speeds available with brush-type motors, even while they’re transitioning to brushless, which allow a greater efficiency over a greater range of speeds.

And several cordless tool manufacturers offer different sizes of batteries (different amp-hour capacities) for the same tool. The big ones produce the impressive power/runtime combination, but there are complaints from the field about the weight and awkwardness of the big batteries. Truesdale points out that some heavy-duty users prefer the smaller batteries and accept that they’ll have to change them once or twice, for the sake of lower weight and easier handling.

Making the smaller batteries more practical are a coming generation of wireless chargers. Bosch has one now: “Now you can just use the tool for a while,” says Truesdale, “and lay it down on the charger every time you take a break from using it. The battery will stay topped-up with no effort and you can keep running the tool all day with a small battery.”

At present, wireless chargers are slow. But the topping-up approach that Truesdale describes makes good us of their convenience.

Although the biggest batteries are noticeably larger, they’re still, to us, surprisingly small. And the smaller ones actually are smaller than some lower-capacity batteries we’ve used in the past. When you increase both power and run time with a battery that isn’t much bigger, if any bigger, than the ones on your old tool, you realize that batteries have made a lot of headway.

“We mentioned that the lithium-ion batteries keep developing more amp-hour capacity,” Truesdale said. “We also should point out that advances in electronics are optimizing efficiency, making better use of that battery power and extending the run time.”

Another tool manufacturer, Metabo, is promoting its battery technology in a big way. The first issue, says Antoine Derché, Metabo product manager, is getting more lithium into the cells. “That’s pretty much what it comes down to, in order to get more amp-hours in a given size of battery.” 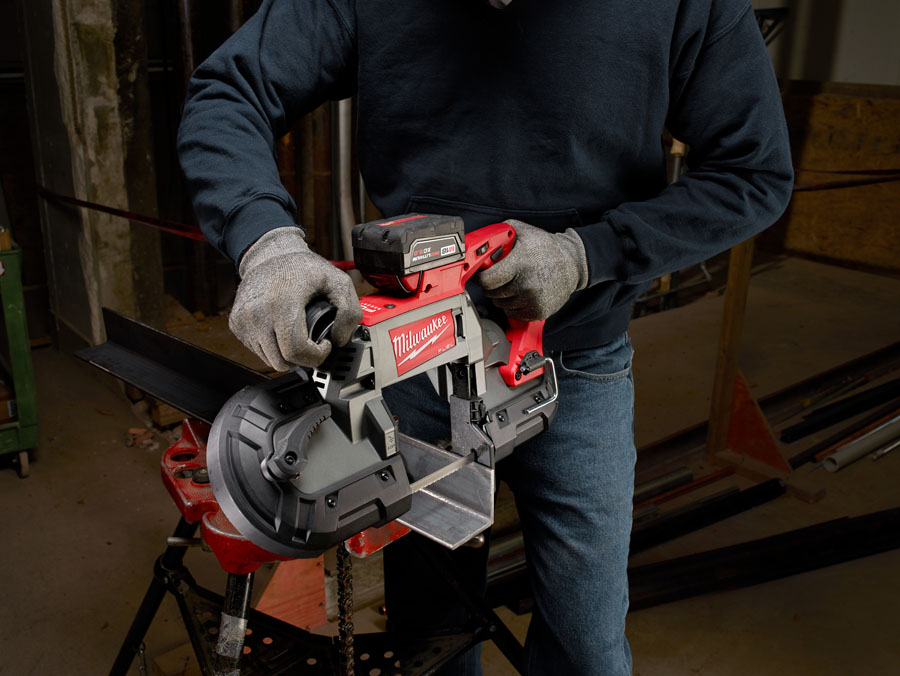 A hand-held bandsaw, like this Milwaukee unit, is a lot handier when there’s no cord to worry about or to tangle in.

But pushing lithium-ion batteries has been fraught with problems, as we’ve learned from news stories about laptops that catch on fire, and strict airline regulations about shipping them. They can produce a lot of current, and a lot of heat, and they have a tendency to thermal runaway: the hotter they get, the worse the problem gets.

Before we point out that these problems are, for all practical purposes, solved in cordless tools, there is an important aside; before it got better, it got worse. The nominal voltage of the individual cells is 3.6 V. Voltage of these tools keeps increasing. Now the common sizes are 12 V, 18 V, and more, up to 36 V and even more for some larger tools. To get that voltage you have to stack the 3.6 V cells in series to make a battery. And a stack of cells adds another problem. Unless they are all nearly identical, the failure of one cell, or a significant difference in capacity for that one cell, can ruin the rest of the stack in the battery when you charge it or discharge it in use. 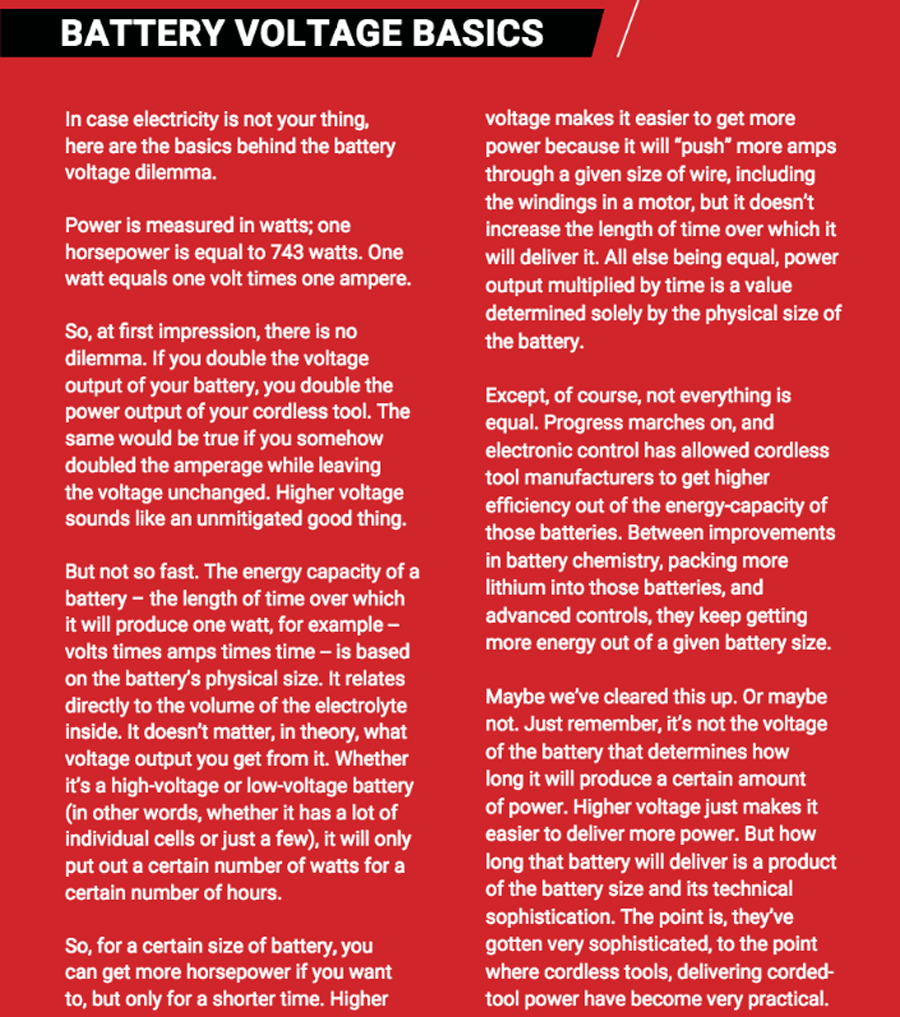 Advanced electronics comes to the rescue. Without getting into the circuitry, just take a look at these batteries’ insides. Metabo’s battery has sensors on each individual cell. With the aid of some smart controlling electronics, it keeps track of the charging, discharging, and health of each one. The circuitry limits the charge rate to make sure the battery behaves the way it was intended.

Lithium-ion batteries, besides having so much more energy capacity, have some other virtues. Their output is fairly flat throughout a discharge. They don’t discharge on the shelf nearly as much as some earlier rechargeables. And they can tolerate a nearly complete discharge – though not absolutely. Control circuitry keeps them from discharging to destructive levels.

The total package produces some startling amounts of power.“Common battery packs now produce 600 or 700 watts,” says Metabo’s Derché. “Our battery packs can deliver between 1,200 and 1,300 watts. Angle-head grinders have been one of the last holdouts for cordless because they consume so much power. We’ve solved that. Using our new high-density battery, we’re able to create a nine-inch grinder with 2,500 watts of power, on a 30-volt platform. That’s about 3.3 horsepower.”

We haven’t seen it yet but we’ll report it when it gets to the market. You’ll have to hold on tight to that one; it might spin you around.

The issue that provoked us to delve into the state of the cordless art was the proliferation of different voltages available. Why so many? As we learned more, that receded a bit as the central issue. But if you’re about to buy a cordless tool, you can start with this advice from Bosch’s Tim Truesdale:

“Choose your battery voltage based your application. For example, if you’re working on a heavy-duty project, you should go with a 36 V tool. If you’re hammering, drilling or breaking, you want that 36 V battery. On the other hand, if you’re drilling large holes, doing heavy woodworking or something similar, that’s when you want to check out the 18 V cordless tools. In general, 12 V models are for finishing work, doing one-off jobs, or if you’re in the HVAC or electrical industry. Those professionals tend to do work that only merits a 12V tool.”

(More voltage, more power – sort of. See the sidebar above.) 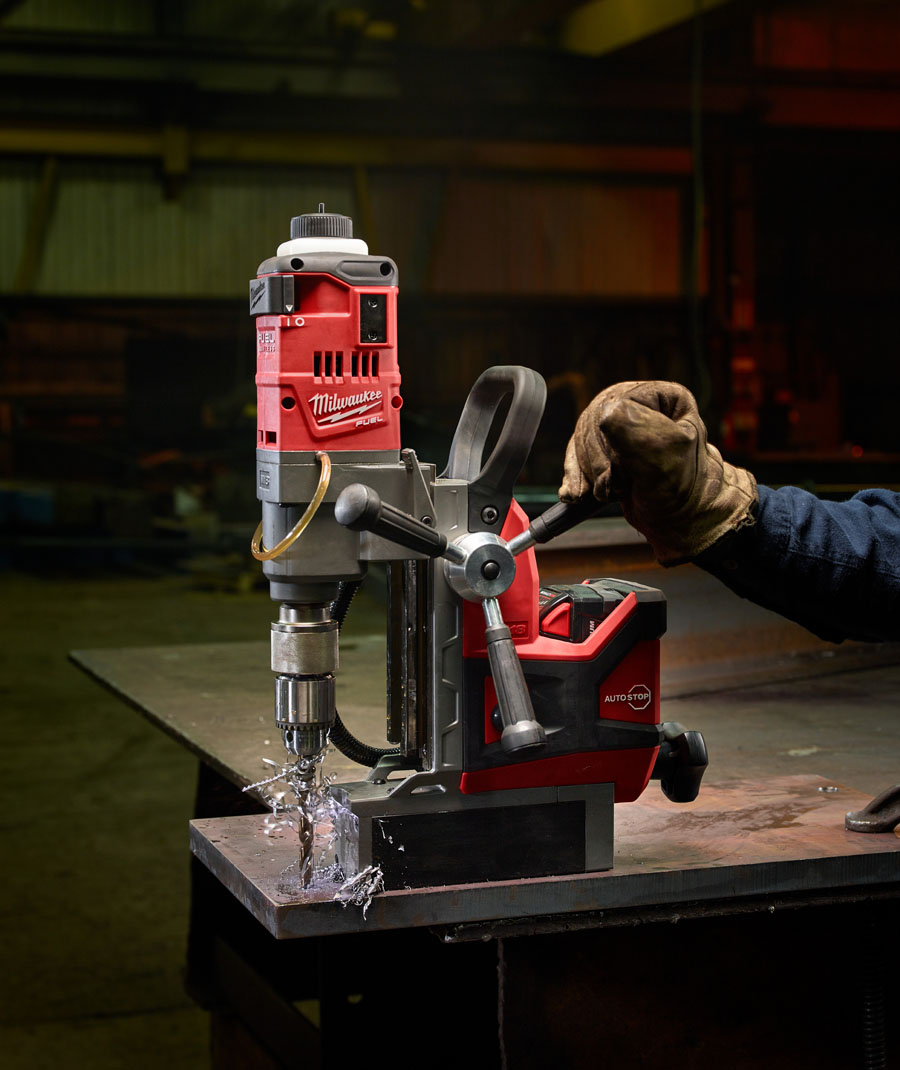 A magnetic drill typically produces a lot more torque than a hand-held drill motor, and it uses bigger bits. Modern battery power does the job.

“Just remember, voltages don’t correlate to runtime. How long the battery lasts before running out of power has to do with amp hours. Bosch has 1.5 to 6 Ah batteries. A lot of people purchase a 2 Ah battery because it works well, and it lasts long enough for the secondary battery to charge and swap out when you’re running low on juice.” 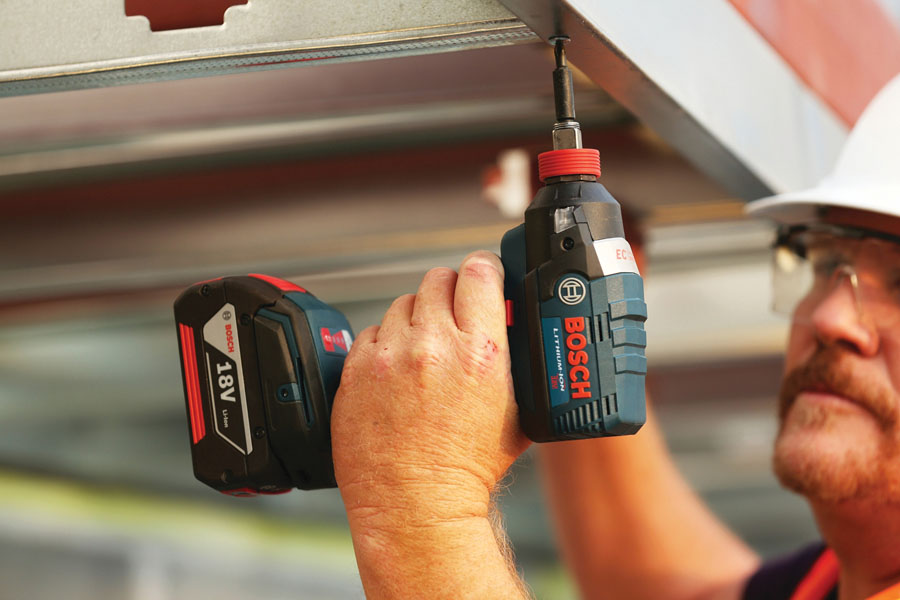 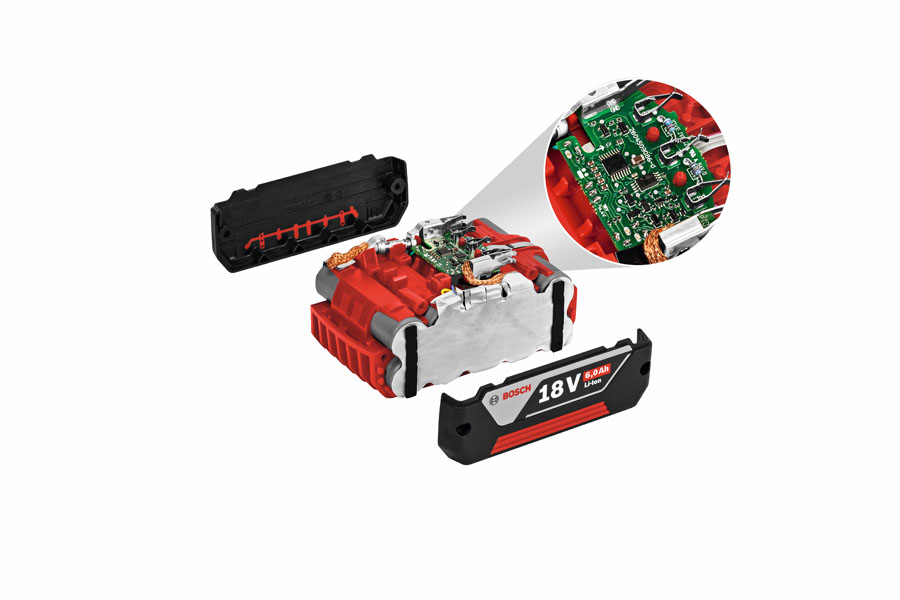 Today’s batteries incorporate electronics right in the battery pack. Controlling charging, monitoring individual cells, and limiting heating are some of the goals.

“It’s not about voltage; rather, it’s the total solution. Higher voltage batteries need an effective motor and electronics. You can’t experience best-in-class performance and run-time by simply searching for the highest voltage. When talking with users in the fabrication and metalworking space, we almost always suggest our M18 FUEL products. M18 FUEL integrates our Powerstate brushless motor, Redlithium batteries, and Redlink Plus Intelligence to deliver power, run-time and longer life. By tying brushless motors to capable electronics packages and advanced lithium-ion batteries, users can push the boundaries of cordless tool performance .

“In addition, for these users, the ability to find a cordless battery system that is compatible with the breadth and depth of work they need to do is a must-have. We offer a broad range of solutions that work off one battery platform, compromised of over 100 tools to satisfy the various needs they have while on the job.”

We only tempered Plowman’s enthusiasm slightly in that quote, because he’s not the only one who has it. His enthusiasm is rampant in the industry. Rarely do we see the kind of performance advances that have occurred in cordless tools over the past few years, and they undoubtedly see a huge market opportunity. Competition, they agree, is fierce. As Derché says, fabricators who are used to electrical cords and air hoses hanging around the shop get the idea very fast. 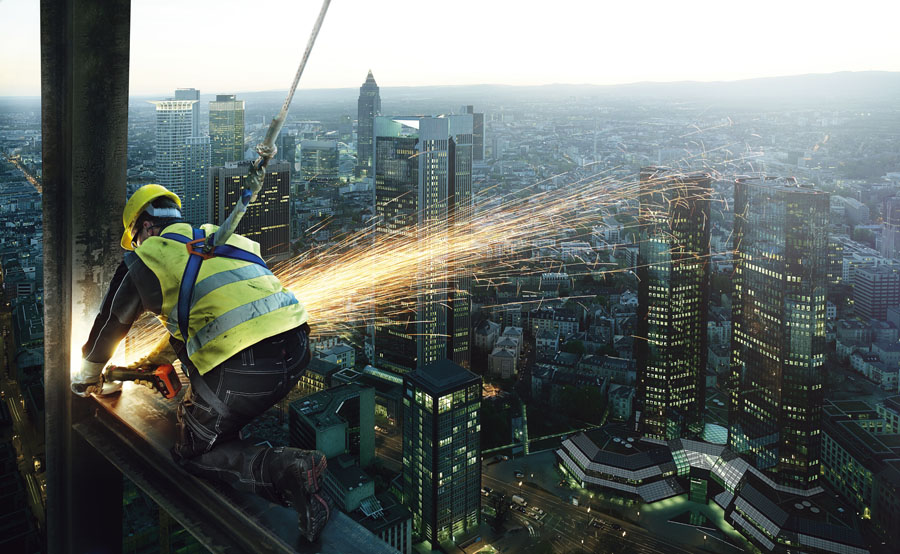 One of the last holdouts for cordless power have been large angle-head grinders. This powerful Metabo unit demonstrates that the hurdle has been crossed.

There are at this writing many hundreds of cordless tools available, ranging from small drill motors to bandsaws and other large shop tools. If we published a list it would be obsolete before you read this, so we want to encourage readers to click on the links below to get the latest. We may have missed your favorite brand; these are just a sampling.

But we have to add DeWalt for an unrelated, but entertaining reason. Rest assured that they’re right in the mix on the industrial products.

The photo on page XX tells the story. Mike Bender, an experimenter with little metalworking experience but with abundant determination, looked at the specs on one of DeWalt’s cordless drills and decided that it ought to be enough to power a bicycle. This might be considered drill motor abuse; it has to run at a very high torque, continuously through the battery’s run time, loading up the bearings that normally have to handle only axial loads and giving the battery an overheating challenge. 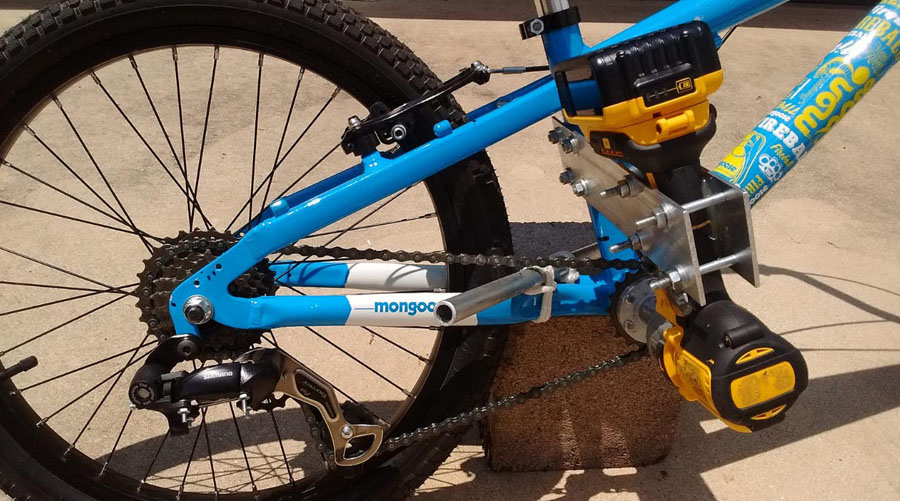 Tool abuse? Or an interesting experiment? Experimenter Mark Bender thought a DeWalt drill motor might work to power a bicycle. ‘Experts’ scoffed. But it worked, and nothing broke. Cordless tools can be tough.

But it worked. Quite well, thank you. We’ve seen some videos of him zipping around at credible speeds and he reports substantial run time on a charge. The battery looks diminutive in that application, but it does the job.

It’s a pretty good testimonial for DeWalt and for the state of cordless-tool batteries. They ought to put Mike in a video. If you want to impress someone with where these new batteries and cordless tools have gone, this isn’t a bad illustration.