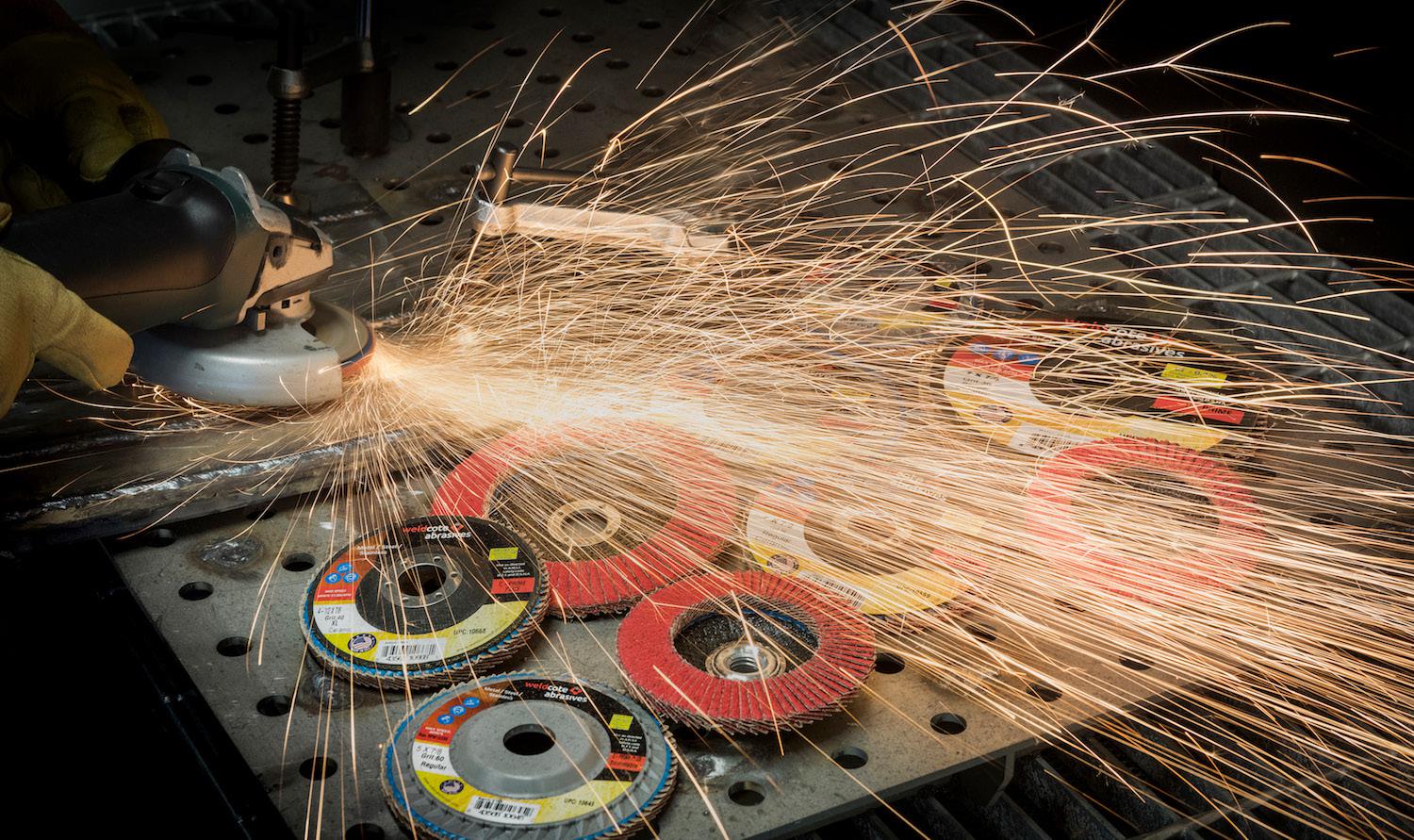 Completing a task always seems to take longer than it should. Whether it’s changing out the tooling on a machine or sorting parts at the end of the line, there never seems to be enough time. So, when a task can be completed in one step instead of two, it should be a no-brainer.

“Flap discs are available in a range of grit sizes, which means that customers can easily find the disc they need to achieve the finish they’re looking for,” says Joe O’Mera, CEO of Weldcote. “Because of that, many of these tasks can be completed in one step.”

Despite the advantages of flap discs, they can still be overlooked as a solution to finishing applications. But when time is of the essence – and when isn’t it? – flap discs can get the job done faster.

“Flap discs remove metal dramatically faster than a hard grinding wheel,” O’Mera says. “Because coated abrasives have grain that is open, you’re putting the grain right onto the metal. With a grinding wheel, there’s a mix of grain and bond material and then fiberglass holds the bond and the grain together. The fiberglass acts as a drag. By putting the grain right on the metal, you have much higher stock removal. That is the No. 1 advantage.”

While flap discs have been used in industrial operations for 30 years, there are some new developments taking place, including at Weldcote.

Part of that is the focus on developing machinery for flap disc production. Flap discs are produced from multiple overlapping pieces of coated abrasive grains that are adhered to a backing cloth. The cloth is then cut into smaller flaps that are layered in a circular pattern to form the flap disc. The layered construction is what offers the soft, giving feel of the flap disc.

“We use the latest state-of-the-art automated manufacturing equipment specifically designed to assemble flap discs,” O’Mera says. “I’ve actually worked closely with the flap disc machine makers and we’ve added a lot of bells and whistles, such as machine automation enhancements, to make a better-performing product consistently all the way through. This provides a great advantage. I’m tied for No. 1 in the world for ordering flap disc machines. I’ve ordered 10 flap disc machines in my lifetime and also worked closely with the machine makers. This is what enables us to design and produce such high-quality flap discs right here in the United States.”

Another development in flap disc design that O’Mera points to is the use of polycotton for the backing cloth in ceramic flap discs.

The polycotton provides increased grain retention and better flexibility than a polyester backing. In the coated abrasives market, 50 percent of the applications are for abrasive belts, which run at a much lower RPM compared to a right-angle grinder. A polycotton backing is much more advantageous for flap discs that are used at higher speeds.

“The polycotton backing is much more flexible and easier to bend compared to a polyester backing so that increases performance when you are maneuvering a flap disc around a corner or joint,” O’Mera says. “It also extends the life of the disc.”

“Even as of last year, the majority of the ceramic flap discs were made with a stiffer polyester backing. The development of the polycotton backing for ceramic flap discs is a great development for the marketplace because ceramic grain removes up to 60 percent more material than the leading zirconia products.”
Joe O’Mera, CEO, Weldcote

A third new development in flap discs is the compressed profile. An alternative to Type 29 conical and Type 27 flat, compressed flap discs are designed for long life.
The unique production design compresses the flaps, which reduces the chance that a flap will catch an edge and come apart and also builds in a 4 degree grinding angle for extended life.

“Because it has a built-in grinding angle, the distributor doesn’t need to carry a Type 27 and a Type 29 disc,” O’Mera says.

“The compressed disc profile is not widely used but it is growing, as well,” he adds. “It’s definitely a growing trend as there really aren’t any disadvantages to using compressed flap discs.”

Although not new, another feature that extends life on a flap disc is its trimmable design. Traditionally, phenolic fiberglass and plastic have been the most common backing plate materials for flap discs. In regard to plastic, nylon 6 is the most advantageous backing plate as it can be trimmed back to expose more material, which allows for longer disc life.

“A trimmable backing plate can increase the life of a flap disc by up to about 65 percent, and that is a major advantage,” O’Mera says. “Ours is a nylon 6 which is durable and trimmable and is much more comfortable to work with than hard plastic. It has more give to it so as you are working around corners it moves with the part and that extends the life of the product, as well.

“And that is something end users still have a long way to go in learning – that they can get a better feel with a nylon 6 flap disc and that it is trimmable. We offer a standard 7/8-in. arbor hole as well as a patented 5/8–11-in. built-in arbor which saves cost versus the additional cost of a traditional zinc hub.”

Because [flap discs] are lighter weight, they are easier to control, which results in less gouging of the metal. Operators also appreciate that flap discs produce less noise than grinding wheels.

The manner in which a flap disc is produced and the materials used can have a big impact on longevity and efficiency. But there are, of course, other ways to extend the life of a flap disc, including choosing the proper disc for the job.

How a flap disc performs is largely related to the abrasive material used and the grit size. The three primary abrasive grains used are aluminum oxide, zirconia alumina and ceramic alumina.

Aluminum oxide is the traditional low-cost abrasive and is still used for softer metals and other applications, but the most common grain used today is zirconia alumina. This grain provides the most versatility for the best price and is used in the majority of applications.

The benefits of ceramic alumina grains include self-sharpening to provide continuous sharp edges and more heat resistance, which both provide longer life. Ceramic grains, however, are the most expensive option.

“Ceramic is the fastest growing option,” O’Mera notes. “The cost was a great detriment, but, as more people enter the market, ceramic grain prices have dropped roughly 30 percent. This allows ceramic to gain market share so it can stand out and show how effective it is. A lot of people still haven’t been exposed to some of the higher end zirconia
or ceramic flap discs, but the ceramic marketplace is going to be growing very fast.”