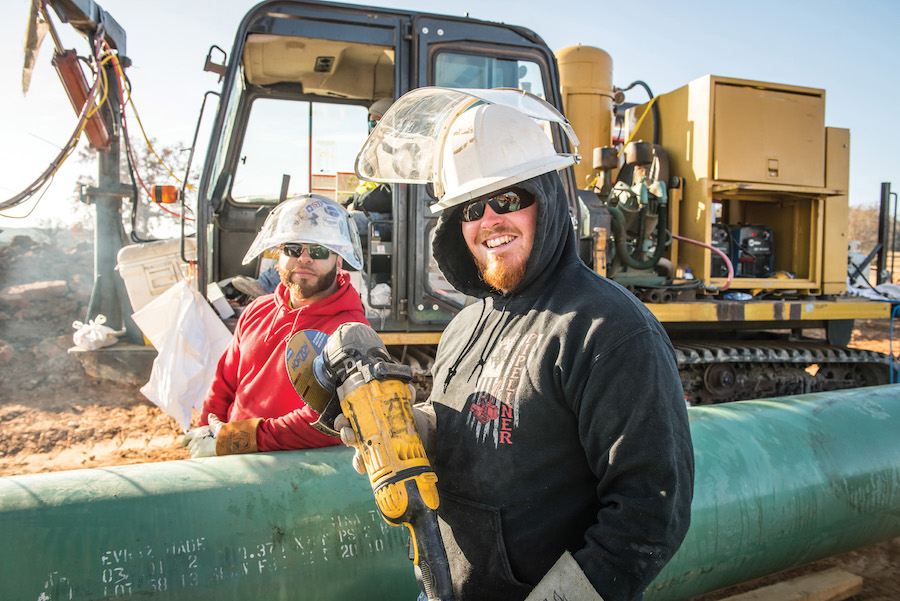 The United States is an energy powerhouse – we are the biggest oil producing country in the world, accounting for almost 20 percent of all global production. According to the U.S. Energy Information Administration, in 2019, the average production of crude oil in the United States reached nearly 12 million barrels a day with 3 million of those barrels reserved for domestic use. To transport that oil around the nation, it travels by rail, truck and, of course, through the 2.7 million miles of pipeline currently in place in the United States.

To accommodate ever-growing demand of both oil and natural gas, the number of pipeline miles in the United States increases each year. According to Underground Construction magazine’s Global Pipeline Construction Outlook 2020, there were 8,076 miles of pipeline under construction at the beginning of the year with 24,092 additional pipeline miles planned.

A pipeline construction site has always been a fast-paced work environment. Huge crews of welders work in coordinated teams to fit up large-diameter pipes and weld them together in a series of passes. Today, however, the pressure to complete a project in a timely fashion is greater than ever before. In the past few months, the pandemic has slowed down supply chains and exacerbated pre-existing labor availability. To say the least, time is a precious commodity on each of these jobsites.

Understandably, there are several factors that could slow down a project. Mother Nature often has her say in terms of the time it takes to lay down a pipeline, but there are other factors that could delay a project’s completion. It’s safe to say, however, that of those factors, using subpar welding and abrasive products is not an acceptable excuse.

A quick google search for pipeline construction contracts results in a long list of current and pending projects, like the Jupiter pipeline project that’s slated to begin in the first quarter of 2021. Many are located in Texas, but there are plenty happening elsewhere throughout the states.

According to Norton | Saint Gobain Abrasives’ new pipeline portal, a pipeline is prepped and welded together in seven steps: facing; prep beveling; tack welding; the root, hot and cap passes; and seam coating. Each is no less important than the next, and each requires specific equipment or abrasive products to get the job done.

The equipment or abrasives needed for each step include:

1. Facing – In this initial step, pipe is beveled using pipe facing equipment, which is typically done offsite. Normally, no abrasives are required until the pipe arrives onsite.

2. Prep beveling – Bigger pipe sections come beveled and pre-landed, but they often need to be cleaned to accept the tack weld. Any dirt or oils must be removed to be able to lay down a clean weld; any kind of divot or bump could be caught in X-ray, fail inspection and cause rework and delays. To remove hard, stuck-on residue or rust, welders use a combo or 1/4-in. wheel. To remove any flashing that may remain, a stringer bead wheel brush or a cup wheel is employed. To clean up divots, a flap disc is preferred as it is more forgiving than a hard wheel.

3. Tack welding – Once the pipes are cleaned and lined up, tack welds are placed to lay down the foundation for the subsequent passes. The weakest point of an initial root weld is the start and end of those tacks, so it’s important to come in with a hard notching wheel or combo wheel to feather the ends and flatten them out to make it easy to accept the first root pass.

4. Root pass – After the tack welds are placed, the first root pass can be laid down. The goal is for it to be as flat as possible so that the next pass can also go in flat. If the weld isn’t flat enough, a hard grinding wheel, such as a combo wheel, is used in this step and for any potential hot passes to remove slag. Stringer beads are also useful as they have more flexibility in removing weld spatter and debris than hard wheels.

5. Hot pass – After the root pass bead is completed, the hot pass focuses on any additional cleanup that may be needed. Here, wire brushes can be used to ensure the weld is defect free for that next pass. Depending on the thickness of the pipe, there can be several passes before moving onto the final cap pass.

6. Cap pass – The cap pass is the final weld that is laid. To ensure that the seam coating can be properly applied to resist corrosion, a flap disc or cup brush are recommended, depending on the amount of cleanup work that needs to be done.

7. Seam coating – To protect the pipeline from the elements, a corrosion-resistant sealant is applied with a brush or sprayed. As long as all previous steps have been properly completed, there is no need for abrasives.

Before anyone picks up a weld gun or an abrasive product of any kind, however, safety must come first. After all, if someone gets hurt on the jobsite, even minimally, costly delays can ensue.

“A simple but critical step in keeping welders safe is making sure that the wheel matches up with the maximum operating speed of the grinder,” says Alicia Castagna, product manager at Norton. “Welding at a proper angle is also important, so Norton works to ensure that making those decisions is as easy as possible.”

Recently, the company began replacing the current safety language on its wheels with a safety icon system to indicate the correct speed, angle of use, hazards and other warnings, and the type of personal protective equipment needed. The set of icons was developed by the Unified Abrasives Manufacturers’ Association (UAMA), which develops standards to support the design and production of abrasives.

“We switched from the wordy safety instructions used in the past to the icon system that was developed by UAMA,” Castagna says. “These icons now improve any previous language barriers or legibility on the wheels with the easy-to-interpret icons. We’re moving all of our products to that.”

More often than Castagna might like to admit, she’s seen users that just want to quickly grab an abrasive product that’s on hand or on sale, but she can’t stress enough how important it is for users to make sure they’re using the correct abrasive for the machine and the job.

“And don’t forget to make sure that guarding is present,” she adds. “It’s critical to make sure operators are protected and it also to help direct the grinding material away from the individual.” 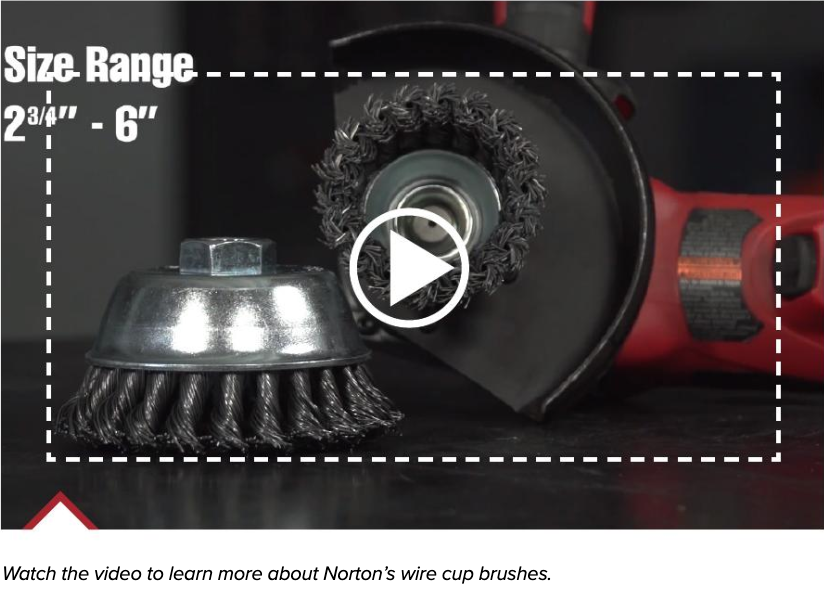 Considering the complexity of pipeline construction, jobsites are full of dozens of guys and gals that are working together. Pipeline projects are large and require a range of skill sets and skill levels. As an example, a pipeline crew will put its best welders at the front of the line for the tack and root pass, knowing that they’ll never create a bottleneck. Less experienced welders are often placed on tasks like grinding down welds.

“These crews are working fast and are out in remote, hard-to-reach locations, so the goal is to limit downtime due to wheel changes and also limit the number of products that are on the jobsite,” says Brad Povelaites, commercial manager, MRO and welding, at Norton. “They’re trying to do as much as they can as quickly as they can and with a limited number of wheel changes. Long-lasting, fast-cutting products are essential.”

In addition to producing quality abrasives, Norton understands the dynamic makeup of a pipeline crew and developed a tiered line of products to address the various skill levels and needs of the industry. Each of the company’s products are available in either a good, better or best tier. Typically, less experienced welders will gravitate to the good or better tiersas budget or exposure to these tiers is a common thread of usage.Meanwhile, veteran welders will opt for the better or best tiers as they have the experiencein understanding the benefits and maximum potential found in those two tiers. For pipeline work, Norton offers hard abrasives products, flap discs and wire brushes.

“For hard abrasives in 1/8 in., we have notchers and combination wheels,” Castagna explains. “For bigger pipelines, we also have 1/4-in. grinding wheels. Notching-only wheels are intended to be used at 90 degrees or at a vertical approach to the weld. For the combo wheel, it’s designed with an extra layer of reinforcement, which allows you to use the wheel in light grinding applications. As a multi-purpose product, you can use it on the beveling side or for any type of finishing when you’re preparing for seams. We also have flap discs, which don’t last as long as a hard wheel, but are forgiving and good for new operators.”

In terms of wire brushes, Norton has a series of heavy-duty products specifically developed for the pipeline industry, including stringer beads and cup brushes. Similar to a notching wheel, a stringer bead is a popular pipeline tool as it offers flexibility and less potential to gouge the material or change the composition of the weld. Even less experienced welders will be successful using the stringer bead.

“The stringer bead is more forgiving than a hard grinding wheel,” Povelaites says. “At 3/16 in., it’s thinner, so you can get into those thinner root passes and clean them out without worrying about damaging the material.”

In terms of longevity, the Norton double-hub stringer bead can be used for an extended amount of time, and then it can be dismounted from the wheel, slipped off and mounted on the other side to significantly extend the life of the product. It also provides more knots for greater material removal.

“The double hub stringer bead has 76 knots on the brush whereas a normal competitor has about 56 knots, extending life by as much as 30 percent,” Povelaites says. “Additionally, our 4 1/2-in. double-hub stringer bead is a true 4 1/2 in. Many competitors are only 4 in., so ours gives more wheel life. It’s just another way that Norton looks for ways to increase the life of the product to make a faster cut rate, so the operators can do more work with fewer wheel changes.”

No matter the operation or the experience level of the operator, Norton has developed a product geared for keeping to tight timelines.

“There are so many steps to the pipeline process; it’s intricate and requires a variety of skill sets,” Castagna says. “We are proud to offer a full line of products that are designed to work together, to get the best outcome, to deliver cost savings and productivity, and do all this in any process or project our customers are working on.” 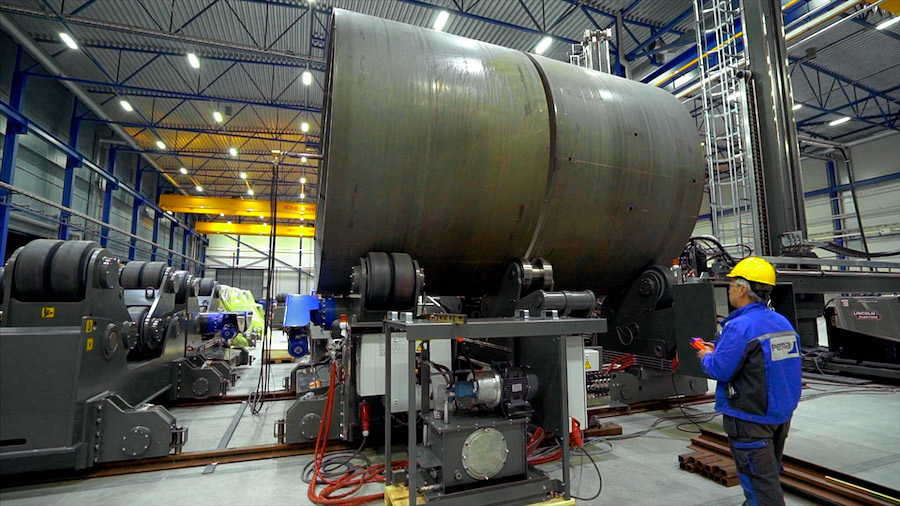