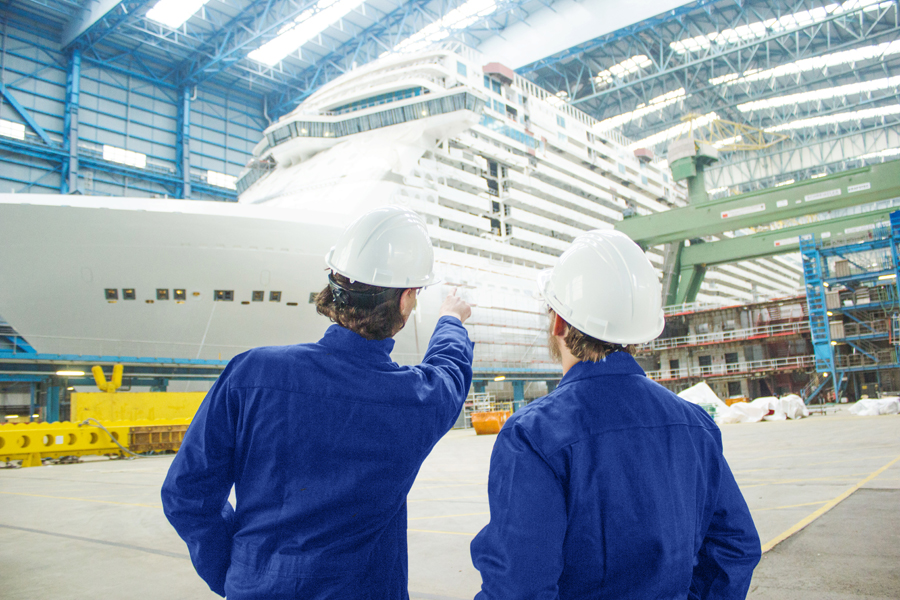 Warning: For anybody who considers themselves claustrophobic, feel free to skip over the next few paragraphs. When it comes to shipbuilding, things can get a little tight.

Building a cargo ship, freighter or any other large seafaring vessel requires a fair amount of manual welding. In the beginning stages, the hull is welded from the outside. But, to construct the interior of a ship – its various stairwells, passageways and access areas for plumbing, electrical and the like – welders must move inside, working in extremely tight and confined spaces.

So in addition to overcoming the occasional bout with claustrophobia, shipbuilding welders have another problem: fume extraction. To remove hazardous fumes from the breathing zone, additional hoses or equipment are often required, which are difficult to drag into the recesses of a huge cargo ship. This problem isn’t relegated to those in shipbuilding, though. For welders in other industries that also work in confined enclosures, the same holds true.

“These welders have to get inside of the structure that they’re working on,” says Craig Whidtfieldt, executive technical director at RoboVent. ”They have to work in tight corners, literally crawling into small spaces to weld a brace, bracketry or piping. It’s difficult work – not just to crawl into those spaces, but also to take a lot of additional equipment with them.”

Traditionally, welders typically were provided with 6-in., 8-in. or 10-in. hoses to remove the hazardous fumes. But that’s just not practical, says Whidtfieldt.

“Even if the hoses are long enough, they can get tangled and get in the welder’s way,” he says. “To remove the fumes in these tight spaces, the extraction equipment must be placed in the exact area where the fumes are being produced – right at the source and with the least amount of energy possible.”

Capturing fumes at the source – within the welding gun – isn’t necessarily a new idea; it’s just one that hadn’t been perfected until recently. Previous models of guns integrated with fume extraction were a tough sell for welders. They were heavy, bulky and didn’t produce acceptable welds. To solve these issues, RoboVent stepped up to the plate and developed the Extractor. The Extractor is a welding gun featuring an integrated fume extraction system. For shipbuilding operations and others, it’s solving the problem of removing fumes in tight spaces.

To produce a successful, integrated gun that could overcome the ergonomic and quality issues of past models, RoboVent looked closely at the material and makeup of these previous models. Traditionally, a lot of metal components make up a welding gun – with or without fume extraction components. Metal components increase the robustness of the gun, but they also give it additional weight. Today’s high-grade plastics, however, are changing the game.

“When you are talking about a piece of equipment that you’re using 8 or 10 hours a day, if you can cut some of that weight, even grams and ounces, it makes a big difference,” says Whidtfieldt. “With high-grade, heat-resistant plastics, RoboVent was able to drastically drop the weight of the Extractor. The new materials also allowed us to make the gun itself smaller in diameter, which boosts its ergonomic grip.”

Another design flaw in previous models was excess fume suction, which would disrupt the shielding gas. The old thought process was to err on the side of caution and ramp up the amount of suction. To counteract that, welders would need to provide more shielding gas to the workpiece, which came at an additional cost to the company to ensure a good quality weld was being produced.

“We did various simulations to determine how the fumes could be captured with a smaller nozzle,” Whidtfieldt says. “It took a lot of research and development to get it right, but now welders can get into those tight spots, produce quality welds and use less shielding gas to do the job.”

The new streamlined Extractor nozzle has a conical suction head, which is located at the tip of the gun, close to the source of the fumes. Nearby, the shielding gas can be emitted with an increased flow velocity without increasing the overall consumption of shielding gas. In addition to gaining maximum visibility and control with the new nozzle, welding fumes are reduced by 90 to 95 percent.

When the shell of the ship starts coming together and welders need to move through those tight spaces, maneuverability is a must. To improve their mobility, RoboVent included a ball-and-socket joint between the torch and the conical suction head on the Extractor. The design also turned out to be helpful when welding outside of the ship.

“For a large workpiece, welders often need to move from one end to the other,” Whidtfieldt explains. “With previous solutions, such as a fume extraction arm suspended from the ceiling or hoses with magnets on the ends to hold them in position, everything would need to be moved and repositioned. With the Extractor, the fume extraction system moves with you. It’s always ready to go, no matter where the welder is located.”

Due to the fact that shipbuilding welders are working in such a unique environment – sometimes inside and sometimes outside – a mobile fume extraction system is key to producing the best and most robust welds possible. Without the Extractor, watertight welds are much more difficult to achieve.

“Welds have to be perfect – they have to hold water,” Whidtfieldt says. “Anytime you introduce lots of air, like fans to blow away the fumes or too much fume suction, you have a high probability of ruining that weld. In some outdoor spots, welders have been known to set up tents and surround an area just to keep the wind out. When they do that, they’re creating their own tight corners where the Extractor performs best.”

In addition to shipbuilders, anybody producing large agricultural implements, subcomponents for bridges, or buckets and blades for construction equipment can benefit from a mobile fume extraction system. These welders also are often working on pieces that are 40 ft. to 80 ft. long. They are constantly moving up and down the product, and time doesn’t always allow for reconfiguring the extraction system according to where welding is taking place.

Others who will benefit from using the Extractor include those who weld stainless steel. Changes in regulations from OSHA regarding hexavalent chromium are being implemented, and although welding stainless steel is a small fraction of the market – less than 5 percent – the new guidelines are slated to also include manganese. When those regulations go into affect, almost every welding operation will be affected. These guidelines are anticipated to be some of the strictest regulated by OSHA to date.

Regardless of the application, RoboVent has eliminated some of the biggest complaints that welders had with past guns with integrated fume extraction. With the Extractor, these guns no longer have to be considered heavy, bulky tools that can’t get a quality job done. As Whitdfieldt says, “This isn’t the same gun that was on the market 30 years ago.”