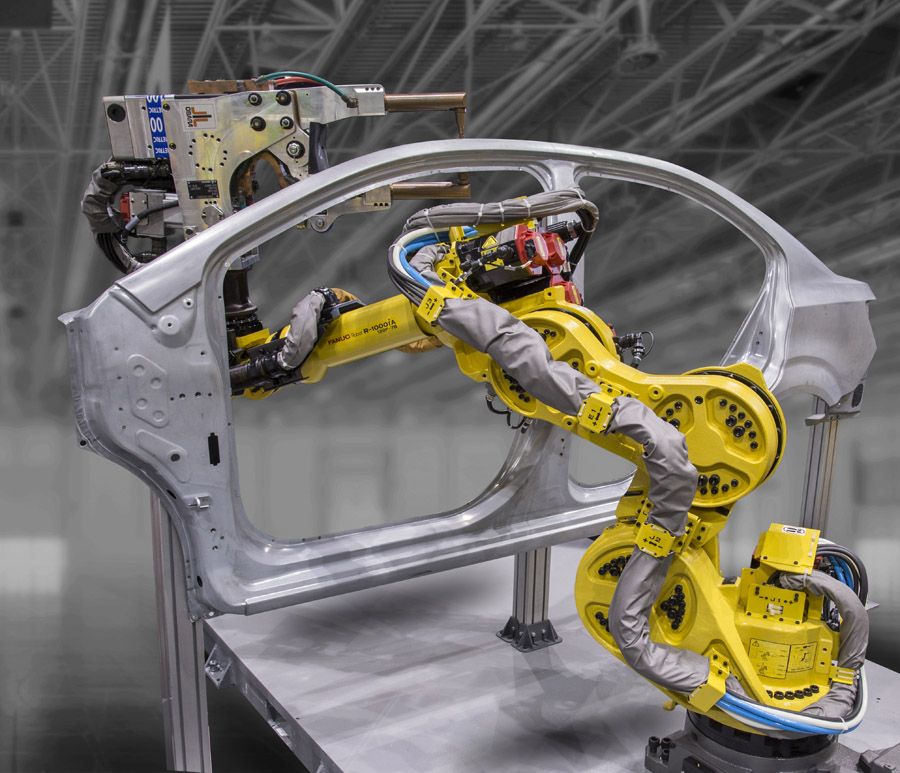 Everybody knows the feeling. You’re trying to get into a tight corner with a tool or welding gun and just can’t … quite … reach. However, you at least have the luxury of stretching your arms a bit further or standing on your tiptoes to gain an extra inch or two of range.

Robots, though? Not so much. That’s why Fanuc, Yaskawa and other robot manufacturers have developed industrial robots nimbler than a ballerina, and with more reach than Mister Fantastic and Elastigirl combined (well, almost). All it took was an extra joint.

Anyone who wandered through the Fanuc booth at last year’s Fabtech exposition in Chicago probably noticed the 7-axis spot welding robot busily working on a car body. It’s called the R-1000iA/120F-7B, and Tim Holcomb, staff engineer in Fanuc’s General Industry and Automotive Group, was responsible for programming it before the show.

“Despite the robot’s additional axis and capabilities, it’s actually easier to set up in one respect and that is the arm is almost bendable,” Holcomb says. “There’s more flexibility when jogging it around, and you have greater ability to manipulate the arm where you need it to go. If you come up against an obstruction, for example, you can basically nudge J7 out of the way and continue teaching the arm your program points. For me, putting the new robot through its paces was actually one of the more enjoyable parts of the show.”

For those unfamiliar with robot terminology, the J7 that Holcomb refers to is the additional joint made possible by Fanuc’s splitting of the J2 casting, the large joint and motor assembly directly above the base. Doing so made room for an additional axis motor, and was what made the 120F-7B possible.

Aside from providing additional articulation, the extra motor also raises the robot’s payload capacity from 100 kg to 120 kg, and increases its speed and acceleration rate, attributes relevant to automakers and other high-production manufacturers.

The motor also gave the robot a smaller footprint, which contrary to what you might be thinking, is one of the main reasons for a 7-axis robot.

“The work envelope remains the same, but it allowed us to bring the robot about 500 mm closer to the work zone,” Holcomb says. “This not only lets the arm reach farther into the workpiece, but once there, makes it easier to reach around corners and such. That’s why we see this as an important tool for automotive spot welding, as well as machine tending and general assembly applications.”

Shaving a bit less than 2 ft. off the distance between the robot and its workcell might not seem like a big deal to some, but to an automotive manufacturing engineer trying to squeeze as many robots as possible onto an assembly line, it’s the equivalent of adding third-row seating to the family car.

“Originally, 7-axis robots were developed to mimic a human’s range of motion, and were used for assembly and similar tasks,” says Chris Anderson, associate chief engineer at Yaskawa Motoman. “In the case of welding, however, being closer makes it easier to reach around obstacles, while allowing for much higher density spacing. That’s important to a number of manufacturers, because as you put more robots in a given space, you have to be concerned about them interfering with one another. Adding a seventh axis alleviates much of that concern.” 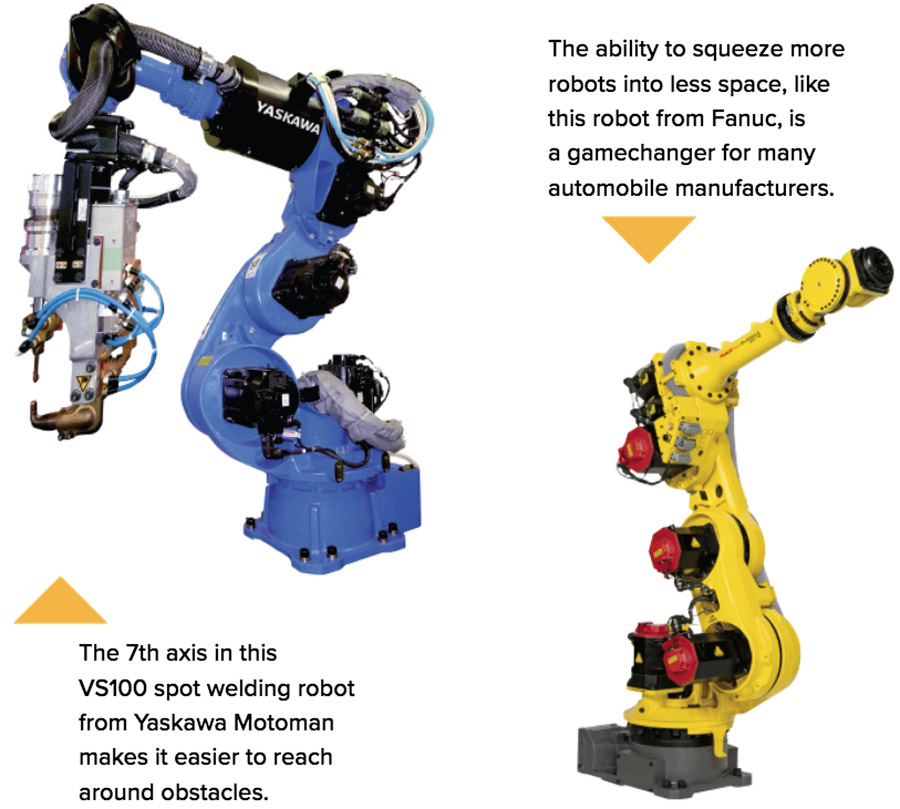 Yaskawa’s 7-axis spot welding robot is called the VS100, although it also offers the VA1400 II and SIA-series, designed for 7-axis arc welding and assembly operations, respectively. Again, one of the main objectives behind the company’s spot welding robot is placing more robots in less real estate, addressing the needs of automakers.

“In the case of automotive spot welding, the goal truly is about sticking more robots in less space,” Anderson explains. “There it’s most common to have multiple robots side by side by side, with each robot attending to a zone directly in front of it, so what’s most essential is the ability to reach up high, down low, underneath – basically reaching everything within its work area in the most efficient manner possible.”

For large, roomy shops equipped with robotic press brakes, or robots welding up electronics cabinets all day, it might be hard to understand all this emphasis on floor space. That’s because the challenges in the automotive industry are much higher than those faced by a job shop, or indeed any manufacturer doing low to mid-volume production.

According to Anderson, a typical automobile assembly line might have 300 to 400 robots. Each assembly station is served by perhaps 10 such machines – five on either side of the car – with each making upwards of 40 spot welds per minute.

“They call it the turkey farm,” he says. “The car body indexes from station to station, with the robots at each station jumping in to make several spot welds before the car moves on. In all, there could be several thousand welds per vehicle, and a completed body coming off the line once a minute.”

For automakers and widget manufacturers alike, the robotic good news goes beyond additional reach and reduced consumption of floor space. Anderson agrees that this new breed of robot is in some ways easier to program, and certainly no more difficult. The price tag for a 7-axis robot is “not all that much higher” than one with six axes of motion. 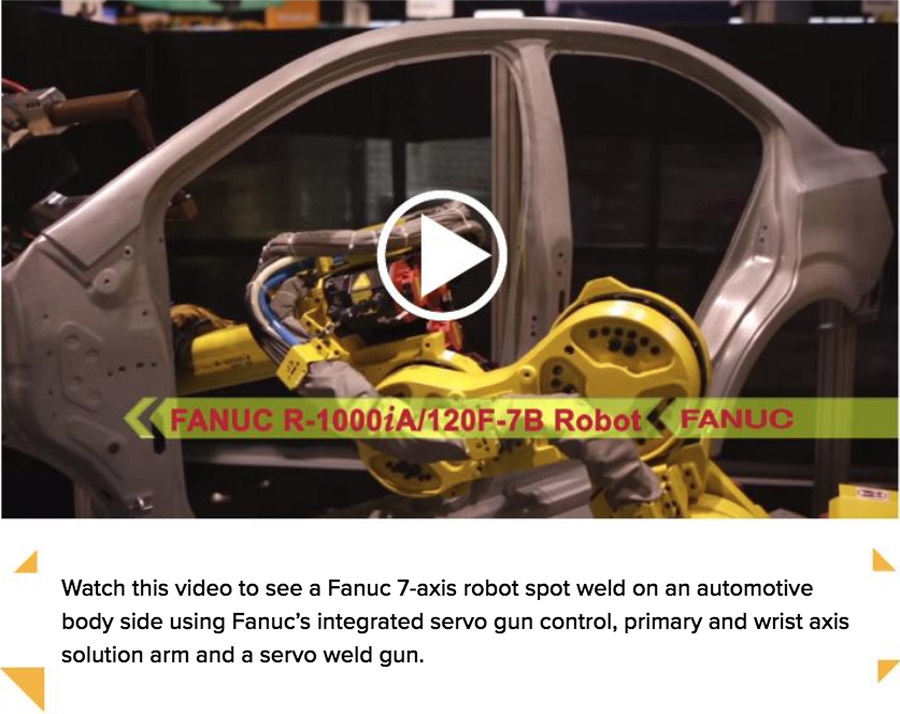 And while robots are becoming increasingly capable, welding suppliers are producing lighter, more efficient equipment, so much so that the 200-kg AC welding head once common has now been reduced to a DC unit weighing half as much.

The bottom line is that automakers – and indeed anyone looking to improve the throughput of their production lines – can dramatically boost productivity without making a major investment.

“As more and more manufacturing operations become automated, floor space is becoming key for everyone,” Anderson says. “Aside from welding, you have painting, assembly, powder coating and so on. If you can squeeze in more such automation without spending a whole lot more, you’ve made everything more productive and predictable and improved your ROI. That’s what 7-axis brings to the table.”