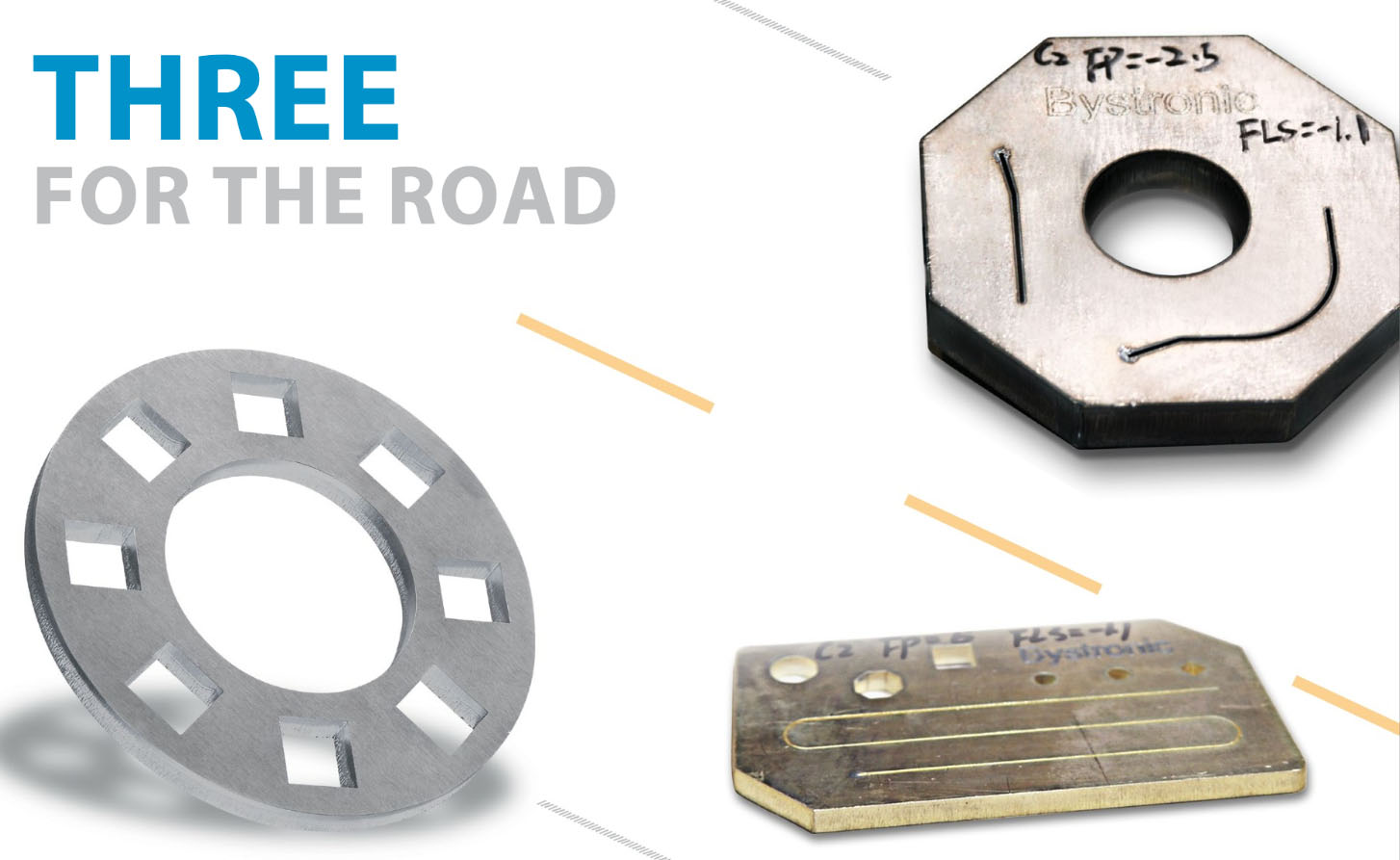 Custom Laser Works is a business that does exactly what its name implies: It provides its customers with unparalleled custom sheet metal fabricating. From automotive parts to furniture components and everything in between, the company laser cuts and forms all types and thicknesses of metal for all sorts of different end uses.

Located in the eternally sunny city of Los Angeles, Custom Laser shares its 103,000-sq.-ft manufacturing space with Ram Off Road Accessories Inc. and Vendetta Motorsports, two companies that feed into the recreational vehicle market. The launch of Custom Laser was in response to the growing word of mouth surrounding its sister company’s laser cutting capabilities.

“Custom Laser came to be because of Ram Off Road’s customer loyalty,” says Chris Foterek, president for the three companies. “We’ve known some of our customers for more than 20 years.” 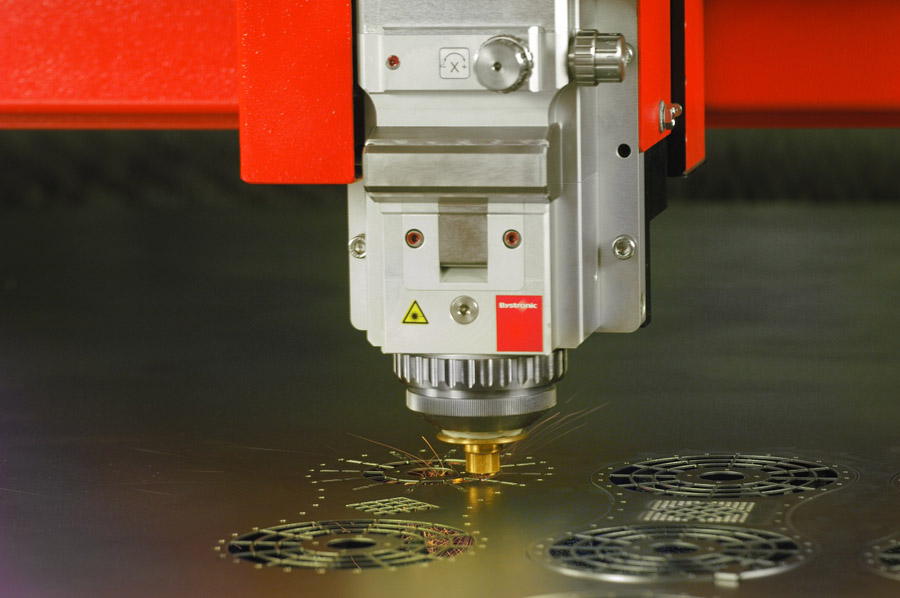 Back in 1989, Ram Off Road was founded by Foterek’s father, who started creating tubular accessories in the automotive and truck aftermarket for vehicles such as Jeeps and ATVs. He found success producing parts ranging from brush guards to side bars and bumpers, all the while paving the way for Ram Off Road’s successor companies.

After propelling Ram Off Road into a respected motor-vehicle parts provider, it was time to grow the business even more. It was time to invest in a laser.

When Foterek’s father first suggested that Ram Off Road invest in its first laser cutter – a Trumpf CO2 machine – not a lot of people at the company were familiar with the technology. Before long, though, the team at Ram Off Road had learned the ropes of its new cutting-edge equipment. Shortly thereafter, the company’s customers started finding out what it was capable of and began contracting the company for side work.

“All of a sudden, we were getting much more work, and that was on top of the work we were already doing for Ram Off Road,” Foterek says. “Whenever our customers would hear about anyone who needed laser work, they would send them straight to us. At that point, my dad said, “Well shoot, now that we’re doing all of this additional work, we might as well launch a dedicated business to meet the new demand. And from there, Custom Laser took off.”

Foterek says that a bulk of the work the company does is for long-term customers, many who have been working with the company since day one. The rest is the result of word of mouth.

The customer loyalty that Custom Laser enjoys comes from the flexibility and consistency that Foterek reinforces each and every day. He’s proud of the company’s quick turnaround times and its ability to complete samples almost as quickly as an order comes in.

“Because of the speed at which a laser cutting machine can process a sheet of metal, I assumed that every fabricator could quickly process a sample piece,” Foterek says, “but from what I’ve heard, that’s not always the case.”

Foterek’s unique ability to turn parts on a dime is a direct result of his personal drive. But, it also has something to do with the second laser that he recently brought in-house. 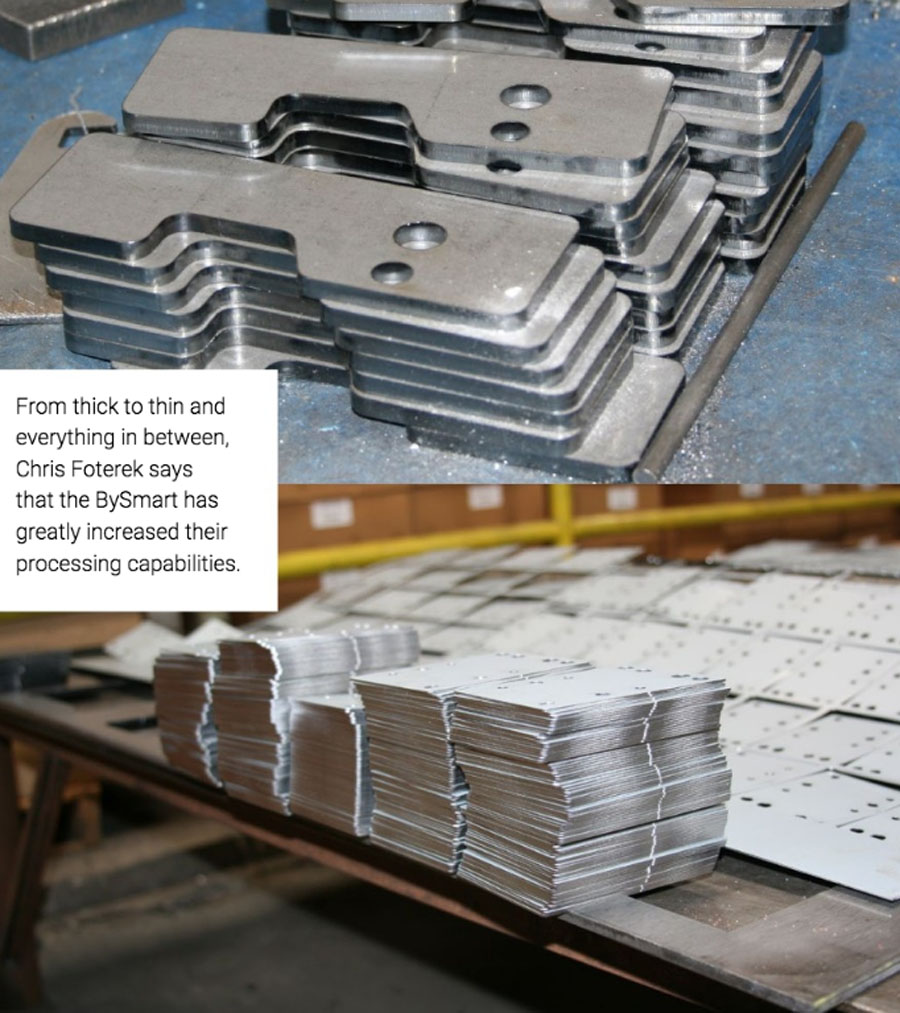 The move to fiber

In December 2015, Ram Off Road and Custom Laser were as busy as ever. And by that time, a third company, Vendetta Motorsports, which produces full UTVs as well as UTV accessories, had been operating for almost two years. To keep up with the workload, Foterek invested in a second laser – this time, a BySmart fiber laser cutter from Bystronic Inc.

Foterek, in fact, was the first U.S. customer to take ownership of a BySmart fiber laser, which had just been released at Fabtech 2015. Foterek set his sights on the new machine because of the overall benefits that fiber offers: simple, quick and cost-effective cutting.

“I didn’t really need convincing when it came time to purchase the fiber laser,” Foterek recalls. “I knew that the future was in fiber. On top of that, I already had a CO2, and I wanted the option to process copper and brass and cut at faster speeds in general, which fiber offers.”

The BySmart is available with a 2-kW or 3-kW laser source, giving it the ability to process the range of materials and thicknesses that fiber promises. According to Bystronic, the BySmart uses the full potential of the high energy density provided by the fiber laser beam when processing in the thin range of sheet thicknesses. Compared to a CO2, therefore, the cutting speeds are significantly higher. The same holds true for thicker materials, as well. 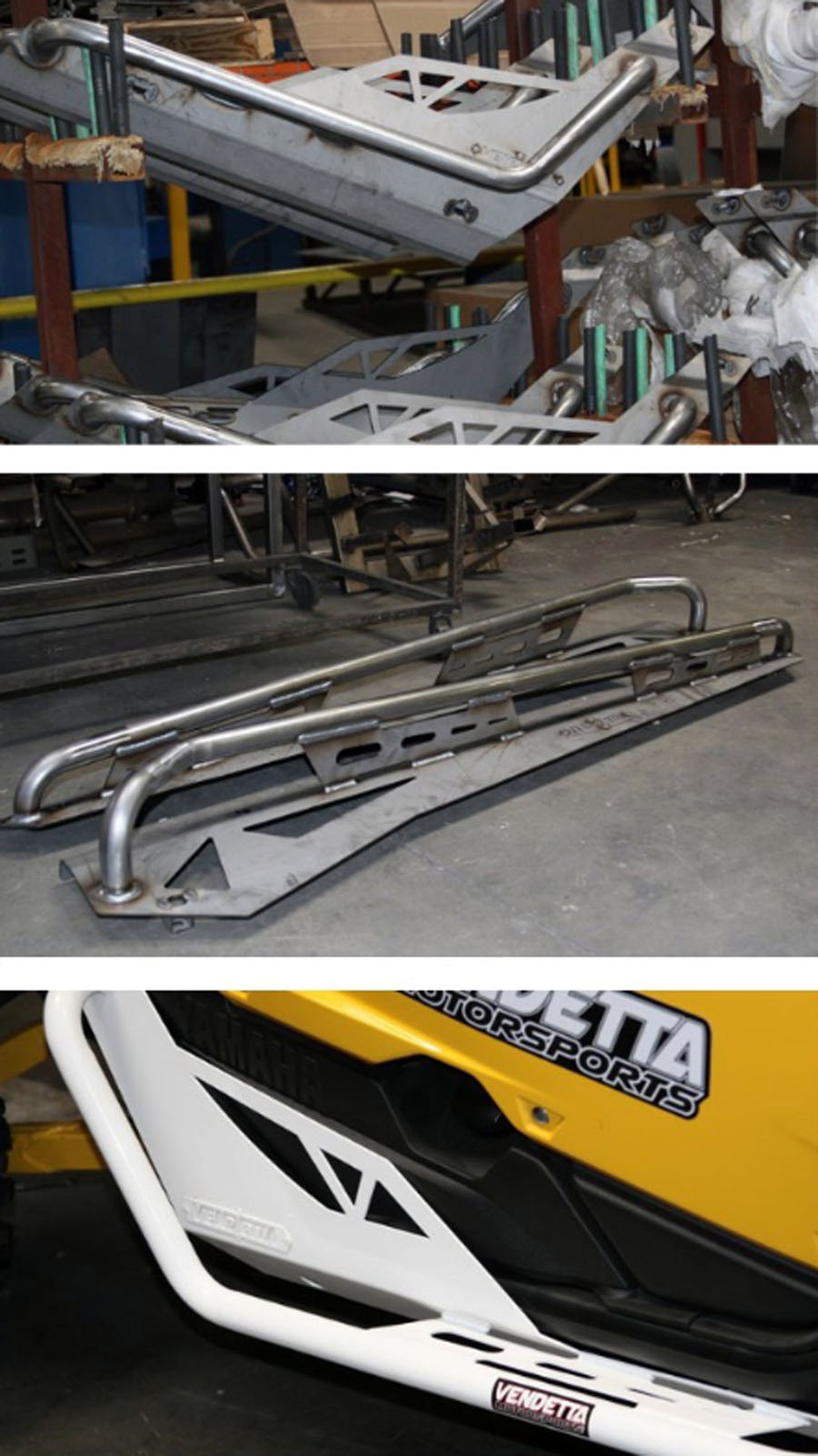 From laser cutting to powder coating to assembly, Custom Laser and its sister companies can fulfill customers’ full manufacturing requests.

In addition to the companies’ two laser cutting machines, Custom Laser’s customers are able to take advantage of the other equipment that Foterek has amassed over the years for Ram Off Road and Vendetta Motorsports.

“We have the capability to handle all sorts of manufacturing here – start to finish,” he says. “From laser cutting, sawing and welding to packing, powder coating and prototyping. We offer quick turnaround, producing one part or production runs in the thousands.”

The additional equipment includes multiple ironworkers and welding stations, a Trumpf press brake, cut-off saws and a powder coating station. Soon, it will also include an OTC Daihen high-speed robotic welder. The robot will have six axes, a payload of 6 kg and more than 2,000 mm of reach. Although automation can sometimes be a worrisome addition for employees, Foterek’s welding employees have nothing to be concerned about.

“We’re going to hire a new person specifically for the robotic welder,” he says, “but we’ll still need to have our manual welders because not all jobs are conducive to robotic welding. Our guys will also have to finish up the little stuff that the robot can’t physically handle.”

There will be a slight learning curve in terms of programming the robot, but the welder features an easy-to-use teach pendant. Setting up a job can be as simple as manually moving the robot along the path of the weld. For Foterek, modern software and programming are a must.

When Foterek started looking for his fiber laser, he did his due diligence and found what he considered to be the best software available. He says that the Bystronic interface is incredibly easy to work with.

“There was virtually no learning curve,” Foterek says of the BySmart software. “It’s brand-new technology on a 22-in. touch-screen interface. When you look at how phones change from year to year, it’s no surprise to see something so intuitive on manufacturing equipment.”

When the engineers at Bystronic build controls, they think about usability first and foremost. Called ByVision, the controls access Bystronic’s extensive cutting database to create the ideal cut based on the material, sheet thickness and part geometry entered by the operator.

“Even though the interface looked completely different, it made perfect sense because I’m familiar with programming our CO2 laser,” Foterek says. “Compared to the CO2 – which was purchased more than 16 years ago – programming a part on the BySmart takes two steps instead of five.”

In addition to programming cuts, ByVision also monitors the machine to provide process and machine data, such as the current cutting plan, position of the cutting head and machine status.

The launch of Custom Laser and Vendetta Motorsports was a natural progression of what was happening for Ram Off Road and its customers. Foterek says that the growth of all three businesses has been exciting to see. And the future capabilities brought forth by the BySmart will be equally exciting to witness.

“When I saw the first job processed on the Bystronic, I was thoroughly impressed,” Foterek recalls. “It was a thin sheet that had a lot of holes that needed to be cut. When we ran it on the new laser, we just looked at each other in amazement, wondering how is it was possible to cut this fast. Everyone said fiber was fast, but until you see it for yourself and especially comparing it to the exact jobs that we’ve been running for years on the CO2, it’s hard to imagine.”

In addition to the sheer speed, Foterek is looking forward to working with potential customers that need to process copper and brass. In the past, he’s had to turn those customers away, but moving forward, he believes that, as before, word will spread like wildfire.

Foterek is also happy about some of the perks that the fiber offers Ram Off Road and Vendetta Motorsports. Not only can they cut more parts faster, they’re also using the BySmart for branding purposes.

“We cut out Vendetta badges and weld them on all of our products now,” he says. “We didn’t do that in the past because it was expensive and time-consuming to do it on the older CO2 laser. With the fiber, you run so fast that the cost is basically nothing.”

Despite all of the work being offloaded onto the BySmart, the Trumpf CO2 will continue to be Foterek’s workhorse. It’s been going strong for 16 years and he believes that it still has many years of life in it. To get the most out of the Trumpf laser, it was outfitted with an automated arm so that the team can load up to 10 sheets, hit start and let it go. Foterek says that when it comes to the overall fabricating process, the laser is now the quickest part.

“We literally cut our fabricating time in half,” he says, referring to the new BySmart. “Regardless of the speed, though, my dad always taught me that it’s not how much business comes in, but how you treat that business – those customers. And that’s why, literally everyone that’s ever come to us, I’d say 95 percent have stayed with us.”