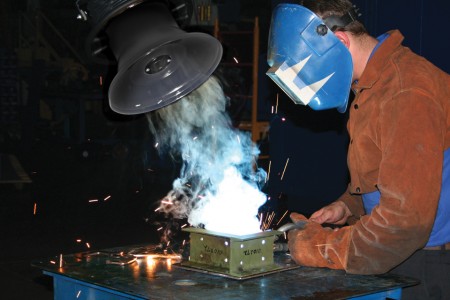 Most air quality problems in metalworking plants can be traced to weld smoke and fumes. Not only can weld fumes result in a visible haze throughout a facility, but the airborne particulates in weld fumes can settle on surfaces – including sensitive electronics and equipment, where the tiny particles can wreak havoc. More importantly, weld fumes can pose serious threats to workers’ health.

According to OSHA, acute exposure to weld fumes can result in eye, nose and throat irritation; dizziness; and nausea. Prolonged exposure may cause lung damage and various types of cancer, including lung, larynx and urinary tract. Health effects from certain fumes may include metal fume fever, stomach ulcers, kidney damage and nervous system damage.

Of all the fumes generated in welding, about 90 percent come from the weld wire, with particle sizes ranging from 0.1 to 5.0 microns. A good rule of thumb is, for every 1,000 pounds of weld wire used, 10 to 20 pounds of particles can be generated. During welding, about 1 to 2 percent of the weld-join metal in carbon steel converts to collectable particulates. For welding aluminum, that figure is 6 to 8 percent. Weld fumes are hot – about 750° to 1,000° F – and especially so when they are close to the welding arc, and they rise relatively slowly from the weld work zone.

If your plant has a weld fume problem, you probably know it based on the telltale blue haze around the lights. But how do you get rid of it? You follow a simple, three-step process that will not only bring relief, but also, a safer work environment.

Step one: Source and process control

The first step to removing dangerous weld fumes from within a welding plant is to reduce their production via process controls relating to the type of welding process, base metal and filler metals used, welding rod composition, size and location of parts being welded, and welder location.

Consider the welding process. Depending on the application, you may be able to change it to reduce fume generation.

In general, robotic welding produces more fumes than manual welding, although it limits the welder’s direct exposure. The average welder can keep the arc on up to 30 percent of the time during a shift. For a robot, that figure rises to 90 percent. Fumes also may be reduced by using power supplies that deliver pulsed rather than steady current.

Limiting the amount of filler metal in the weld joint can reduce fume generation, as can careful selection of weld wires and shielding gases. Both aluminum welding and welding with flux-cored wire produce more fumes. Stainless produces less fume volume, but the fumes themselves are highly toxic. Using solid wire with argon-based shielding gases in fine-droplet-spray transfer gives one of the lowest levels of fumes per amount of weld metal deposited. However, low-fume versions are available for virtually every welding consumable, especially flux-cored and metal-cored wires. Check the wire’s recommended “sweet spot” for the voltage and amperage settings that minimize fume generation.

Sometimes, the culprit is the coating on the welding surface, such as solvent residue, oil or paint. Take care to remove it, if possible, to reduce the chance that it creates toxic residues during the welding process. Anti-spatter is a particular concern. While anti-spatter does keep the weld tip clean and improve weld quality in cases of bad welds, it is a Band-Aid approach that should be avoided or minimized when possible to reduce weld fume production.

The size and location of the parts being welded also affect the amount of weld fumes in the air. If a welder is working on extremely large parts that can’t fit within a welding cell, it may be difficult or impossible to install a fume extraction system. Welders working in confined spaces also may face problems getting fume extraction systems close enough to the source of the fumes.

Once engineering controls have been implemented to help reduce the amount of weld fumes generated at the source, the next step is to extract the remaining fumes. There are two options: source capture and ambient capture.

The best option is to capture the weld fumes right at their source, before they reach the welder’s breathing zone. Source extraction options include:

One disadvantage of “local” fume extraction systems is that they require ductwork, making it more difficult to move welding cells around on a plant floor.

With any localized fume extraction system, plants must take care to avoid having the extraction system pull the smoke across the welder’s breathing space. This is a particular problem when the smoke forms a plume behind the welder. A downward airflow reduces air turbulence and significantly reduces re-entrainment, or re-blowing dust, within the collection unit.

Facility-wide, ambient ventilation systems are appropriate when used in conjunction with source capture systems or when source extraction is not possible, such as when welding large products or when a plant is tasked with welding different parts in different locations all the time. These ambient systems can be placed on a plant’s roof with a circuit of ductwork back to the welding cell, although ductless systems are also available and provide additional flexibility and lower cost if a welding cell needs to be moved. The systems need not be big and bulky; compact models are available with fans contained internally, protected from inclement weather and moisture. Such roof-mounted systems eliminate downtime for a plant during installation, maintenance, and filter cleaning and changeouts.

While ambient ventilation systems offer several advantages, they also have disadvantages. First and foremost: Ambient systems require the smoke to travel throughout a facility before it is removed, thus creating that familiar blue haze. Airflow patterns within a facility must be optimized for an ambient ventilation system to work best. To that end, it’s wise to “map out” the heat, air and pollutant flow inside a plant before placing any ventilation equipment.

An airflow mapping helped one heavy equipment manufacturer: The plant’s welding operation was on the far opposite side of the facility from its assembly operation. However, assembly workers still complained about sore throats and eyes as well as tiny bits of metal getting caught in the paint of the parts being assembled. Mapping helped the manufacturer identify the problem and redesign the direction of the flow of the plant’s heating system to isolate out the welding area. After this airflow mapping process and subsequent design of a new ventilation system, health issues and paint prep issues disappeared.

Keep in mind that once those fumes have been extracted and removed from the breathing air, they need to be exhausted to the outside or filtered and returned to the plant in the form of clean make-up air. Exhausting fumes to the outside can place a plant at risk for EPA oversight while increasing heating and cooling costs related to make-up air. Filtering the air and returning it to the plant is most often the wisest choice.

Once engineering controls and ventilation systems have been addressed, personal protective equipment (PPE) in the form of a respirator is the last line of defense against weld fumes. Welders can take advantage of a variety of respirator types, from N95 or N99 half- and full-face respirators for simple welding to powered air respirator systems (PAPR) with HEPA filters that can remove 99.97 percent of airborne particles 0.3 microns or smaller. PAPRs use a blower to force the ambient air through air-purifying elements so welders can breathe filtered air.

When selecting a respirator, be sure it fits easily under the welding helmet and does not compromise the welder’s field of vision. Also be sure that you select a respirator with the right type of NIOSH-approved filter for your welding environment. These are classified based on oil resistance: N (not resistant to oil), R (resistant to oil) and P (oil-proof).

PPE training for workers should include demonstrations and practice time on how to properly wear the respirator and determine if it fits correctly. A seal check should be conducted each time a respirator is worn to help verify the wearer has donned the respirator properly. While this may feel awkward at first, it will likely become easier with repeated practices, thus driving compliance.

Fit testing should also be conducted before the first use of the respirator and then regularly thereafter – especially when a different respirator is used or whenever the wearer undergoes changes that could alter facial structure or size, such as significant changes in body weight.

Welding is a hazardous occupation, but the environment doesn’t have to be hazardous to welders’ health. And that’s because the risks associated with weld fumes can be greatly reduced or even eliminated by following the three-step process outlined in this article. When source and process control, ventilation and air filtration, and proper PPE are considered, the danger of weld fumes can be avoided.

Creating a safe and clean work environment also doesn’t have to be a solo project. A licensed safety professional can help a weld plant develop the appropriate weld-fume abatement strategy for its needs. In addition to reducing health and safety risks, a clean plant environment has been proven to increase worker productivity, reduce absenteeism and attract and retain top welding staff. 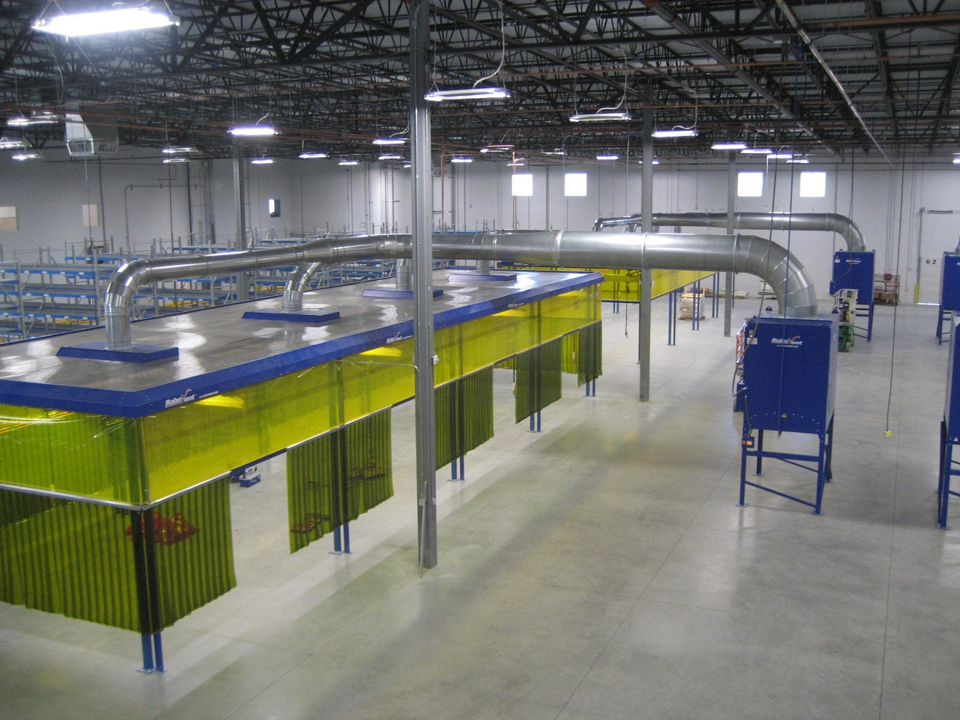