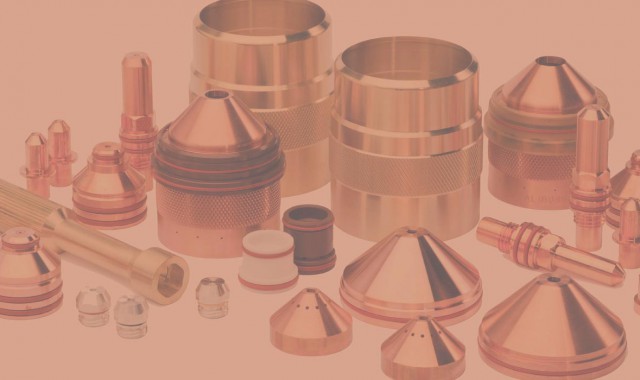 Plasma torch consumables play an essential part in achieving a successful material cut. As the consumables within the plasma torch wear over time, however, the quality and accuracy of the finished parts is diminished. The most probable consequences of using worn consumables are out-of-tolerance production parts, resulting in costly rework, wasted material and torch damage.

As with any type of cutting equipment, plasma torch consumables provide signs when they are not working properly or optimally. A good way to assess the condition of the consumables and determine if they need changing is to periodically check for increased edge bevel, dross buildup and edge distortion. Another sign is if the plasma torch has difficulty starting the piercing arc.

“When these conditions occur, it is common practice for the operator to replace the entire set of consumables, particularly the electrode, nozzle and shield cap, instead of evaluating each component individually,” says Bill Hodges, product application manager, Lincoln Electric Co., Bolingbrook, Ill. “This results in excessive consumable use, which negatively impacts the overall cost of operation and increases the cost to produce each finished part.”

Many variables affect the life of plasma torch consumables, so it’s difficult to exactly quantify the number of expected pierces from each component. It’s important to remember, however, that the consumable manufacturer can provide data outlining the average consumable life span and develop guidelines for expected life span based on the amperage, arc on-time and material thickness.

But, an even more effective way to know when consumables need to be replaced is to learn what to look for on each plasma torch consumable and then perform a quick visual inspection when cut quality diminishes. Each consumable plays an important role in producing the highest cut quality. In addition to the electrode, nozzle and shield cap – which garner most of the attention – it’s also important to inspect the swirl ring, inner retaining cap and outer retaining cap.

To stay on top of these variables, the following list of guidelines should prove helpful for recognizing when all six of these consumables have reached their end of life.

Note: The guidelines apply to manual and automatic plasma cutters. Handheld plasma torches tend to use more consumables due to the human factor, such as the torch tip touching the plate while cutting.

The brass outer retaining cap covers and holds all the stacked consumables onto the plasma torch head. It should only be replaced if there is visible damage such as slag or splatter, buildup, dents or burns on either opening, or if it is difficult to thread onto the torch head. Not replacing the outer retaining cap in a timely manner could cause shield gas leaks and poor cut quality.

The copper shield cap funnels the shielding gas to provide additional nozzle cooling and improved cut edge squareness. Although the shield cap is not consumed by the plasma arc, due to its close proximity to the workpiece, it is susceptible to damage from plasma torch crashes and pierces made too close to the plate.

“The orifice in the shield cap is crucial to edge cut quality, so the cap should be replaced when it becomes burnt, bent or otherwise out of round, making it unable to function effectively,” Hodges says.

An abrasive pad (not sand paper) can be used to remove slag that has built up on the shield cap. Not replacing a spent shield cap can cause poor cut quality, such as rounded or beveled part edges.

This cap is not consumed by the plasma arc and can easily last up to 30 or more electrode replacements. It should be replaced only if the orifice is burnt, bent or out of round, or if the holes in the copper body or insulator ring are plugged with debris or damaged.

The copper nozzle wraps around the electrode and has a small output hole in which the gas flow and the swirling plasma arc are directed. When new, the nozzle orifice is perfectly round with a clearly defined sharp edge. This feature is the key to optimal cut quality. As the plasma arc grows or widens, the kerf increases, causing part dimensional inaccuracies. Edge bevel also increases.

The nozzle should be replaced when the orifice begins to become out of round on the outer or inner bore or when the sharp edge erodes. “There may be some light swirl marks on the inside of the nozzle caused by plasma arc starting, but this is not a cause for replacement,” Hodges says.

Under normal cutting conditions, expect to use two nozzles for each electrode to maintain the highest cut quality.

The swirl ring is machined from a high-temperature-resistant material, such as Vespel or ceramic, and, therefore, is not consumed by the plasma arc. It serves as both an insulator between the electrode and nozzle and as a vessel to create the swirling action of the plasma gas needed to create precision cuts. The swirling allows the gas to reach different temperatures. The cooler gas is in contact with the nozzle and prevents it from burning up.

Care must be taken to ensure the small holes in the swirl ring remain free of debris, and it should be replaced if any cracks or chips are detected. “Because the swirl ring can last a very long time, it is constantly being removed and re-installed with new consumables or stored for reuse at a later time,” Hodges says. “Therefore, it has a high chance of being dropped on the floor or in the cutting table or picking up metal chips or debris from the environment or the operator.”

Finally, the electrode is the conductor from which the plasma arc starts and travels to the workpiece. The electrode is made of copper or silver or a combination of both and contains a separate emitter rod insert made of either hafnium or tungsten. The emitter rod offers less resistance to current flow than copper, which prevents the electrode from burning up while the high-current arc is generated.

As long as the plasma arc is on, the emitter rod is being consumed and it develops a pit at the front. Eventually, it reaches a depth that allows the arc to jump directly to the end of the electrode. This results in an immediate blow-out, which will also destroy the nozzle and shield cap and could also damage the plasma torch head.

“The safety zone for emitter wear depth, or pit depth, is approximately 0.040 in. (1.02mm) for copper electrodes and 0.1 in. (2.54mm) for silver electrodes,” Hodges explains. “Once that pit depth is over the limit, it’s time to change the consumable.”

As a side note, for any consumables with O-rings, the rings should be inspected for possible damage such as nicks, cracks and tears. O-rings should be properly lubricated using the manufacturer’s recommendations.

When plasma torch consumables reach their end, the quality and accuracy of the finished parts is diminished. Knowing how to recognize when these consumables have reached their end of life can prevent any part diminishment, which is the whole name of the cutting game.