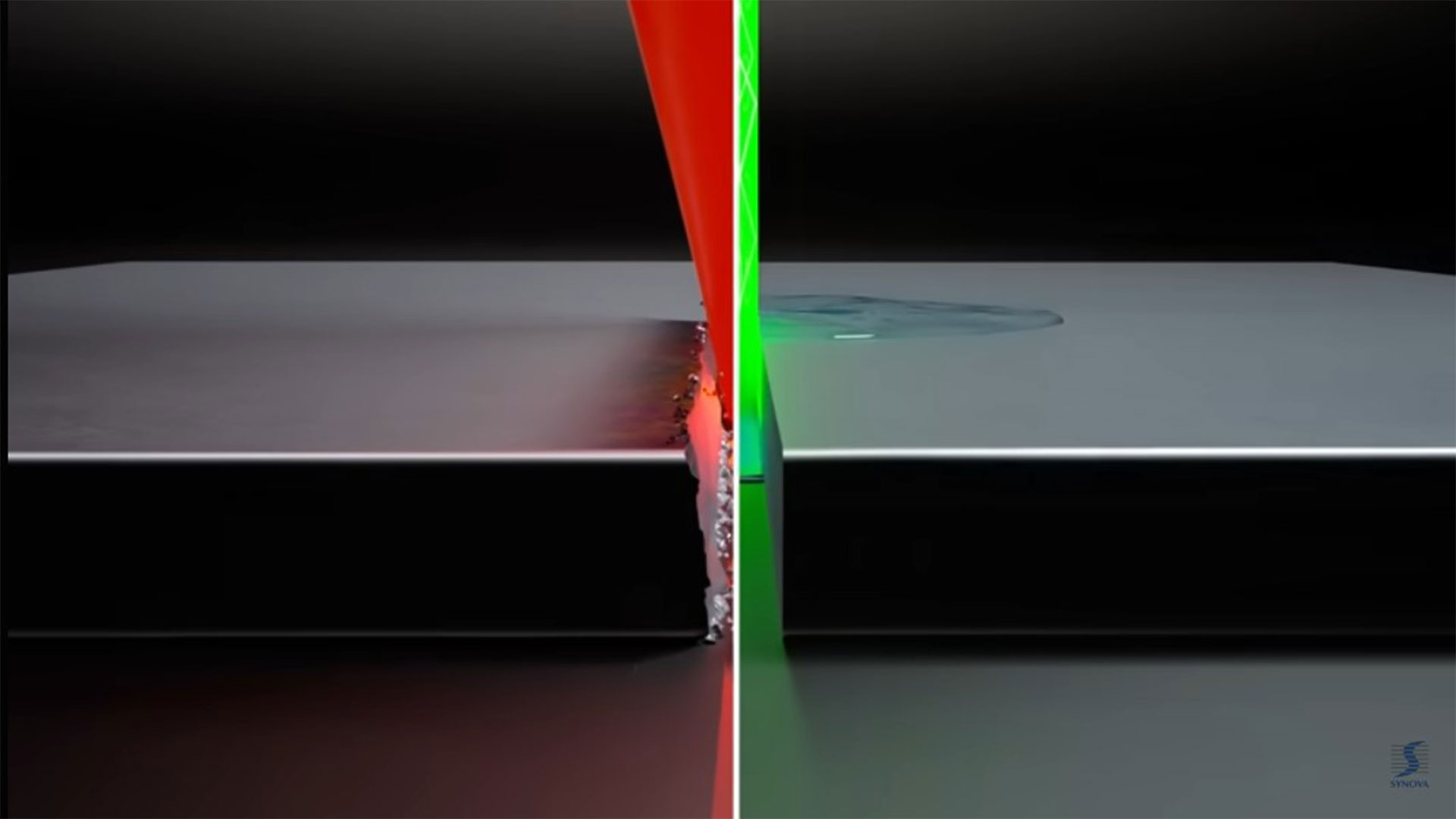 In the world of metals fabricating, processing thin materials can pose a challenge – with heat input being one of the main assailants to material composition and integrity. Medical component manufacturers that produce stainless steel stents know this challenge well. Compared to traditional metal fabricators that process material measuring in millimeters or fractions of an inch, medical stent manufacturers often deal with wall thicknesses measured in microns.

So imagine the challenge posed to those manufacturers that create the smallest of electrical components, like the resistors found in everything from TVs and laptops to toasters and the lights illuminating city streets. These components fall under two categories: thin and thick film. Those made of a thin film are often used in the most critical of components and are measured in angstroms, which is literally the measurement of layers of atoms.

In recent years, fiber technology has advanced to the point where the laser beam can be tuned and modified to reduce heat input, giving traditional metal fabricators a better cut outcome. For those fabricators that work with thin film, however, traditional fiber lasers even when modified can still input a detrimental amount of heat. Fortunately, a laser technology is available for these critical applications, one that incorporates a thin stream of water to keep heat input low and processing quality high.

The revolutionary Laser MicroJet process from Synova S.A. was developed in the 1990s by Dr. Bernold Richerzhagen, the company’s founder and CEO. The process combines a fiber laser with a hair-thin stream of water and was introduced to overcome thermal damage, contamination, deformation, debris deposition, oxidation, micro-cracks and tapering in thin materials. By combining an otherwise “dry” laser with a thin jet of water – which essentially mimics a traditional laser beam’s optical cables – the water is able to cool the cutting zone while simultaneously removing material debris.

Appropriate applications include the production of thin-film resistors as well as products that fall under a range of markets: energy, aviation, watchmaking, medical and micromachining. It is also highly leveraged in the production of semiconductors, a major growth opportunity for U.S. manufacturers and fabricators in the very near future.

According to Technavio, a leading technology research and advisory company based in London, the thin-film chip resistors market is “projected to grow by $629.45 million with a CAGR of 6.61 percent during the forecast period 2021 to 2026.” Market growth will be driven by increases in data center infrastructure, rising digitalization and the overall advantages that thin film provides.

For many businesses, the pandemic inspired renewed interest in diversification – pursuing new markets and investing in new automation and equipment. “[It] accelerated innovations based on new products, materials and processes for which we offer appropriate solutions,” said Dr. Richerzhagen in an interview with the organizers of the international trade show Laser World of Photonics. “Twenty-three years after I founded [the company] in 1997, we are experiencing a huge surge in demand.”

Based on thin-film forecasts alone, it is unsurprising to hear that interest is increasing for the Laser MicroJet system. Not only can it open the doors to thin-film markets, it also expands opportunities in more traditional thin-material markets, such as medical and aerospace where precision and material integrity are key.

Years – decades, of course – before the pandemic, scores of manufacturers had already invested in Synova equipment, including one of the world’s largest manufacturers of electronic components, which produces everything from resistors, inductors and capacitors on the passive side to semiconductors, MOSFETs, optoelectronics and diodes on the active side. The company sought out Synova to expand into new markets and for the Laser MicroJet’s cleaner process and higher accuracy.

“The Synova laser allows us to cut and shape substrates that we couldn’t do before,” says a spokesperson for the company’s specialty thin-film division. “Our division fits under the passive side under resistors. The majority of what we do is build-to-print, primarily working with ceramic materials, such as alumina, aluminum nitride and beryllium oxide. Based on customer requirements, we could be putting metals on a base material, drilling holes or creating various patterns.”

The majority of the markets served by the specialty thin-film division fall under the category of AMS (avionics, military and space), producing parts involved with radar and other specialty aircraft. To date, the majority of the division’s specialty thin-film parts have been produced on CO2 laser systems, continually meeting and exceeding customer expectations. In 2018, the addition of the Laser MicroJet expanded the division’s processing capabilities, opening the door to new applications and materials.

“Aluminum nitride is a good example,” the spokesperson says. “As a good conductor of electricity or, in this case, heat, it’s often used in thermal applications. As its thickness increases, it dissipates heat at a high rate, which, unfortunately, produces some cracking with a CO2 laser. The CO2 laser is basically forcing its way through the material whereas with the Synova, the laser waterjet is cutting through the material, but not using the heat to get through it.”

Based on the successes the specialty thin-film division has seen with materials like aluminum nitride that are good heat conductors, the company has plans to expand into thermal applications for industrial and medical markets in addition to expanding further into the AMS market.

While the company primarily deals in ceramics and composite materials, similar opportunities are available for traditional metal fabricators, as well.

In the interview with the trade show organizers, Dr. Richerzhagen told the story of how his novel laser technology came to be. As a PhD student studying mechanical engineering with a focus on medical technology, he initially dedicated his studies on the development of a laser for painless dental treatments.

After discovering that the laser beam was being scattered by the water mist, he reverted to an idea that had been presented more than 100 years previously: using a jet of water to guide light – the earliest inklings of today’s optical fibers. After several years of trials, he was finally able to combine a laser beam with a water jet for the purpose of material removal with minimal heat input.

“As with other laser processing methods, a strong plasma forms on the processing area,” Dr. Richerzhagen explained. “Thankfully, it withstands the water pressure. With each laser pulse, a plasma bubble forms where the light hits the material. The water cools the area between the pulses and washes away any ablated material.

“Thanks to the cooling and the high frequency of tens to hundreds of thousands of laser pulses per second, the process is fast and efficient,” he added. “At the same time, it is highly precise thanks to the parallel laser beam. By coupling the laser to the fine, straight water jet, there is no focal point, which means that even cuts a few centimeters deep have smooth, burr-free edges.”

Furthermore, the Synova equipment produces parts with virtually zero kerf. This, among the other myriad of benefits, serves as a major advantage over “dry” laser cutting.

Recently, Dr. Richerzhagen’s innovation was recognized by the Laser Institute of America in the form of its most prestigious accolade, the 2022 William M. Steen award. In a press release announcing the award, it was revealed that Synova was nominated by a nationally recognized aerospace manufacturer “for its innovative use and development of Laser MicroJet technology and was selected out of almost 50 applications for significant developments in laser material processing.”