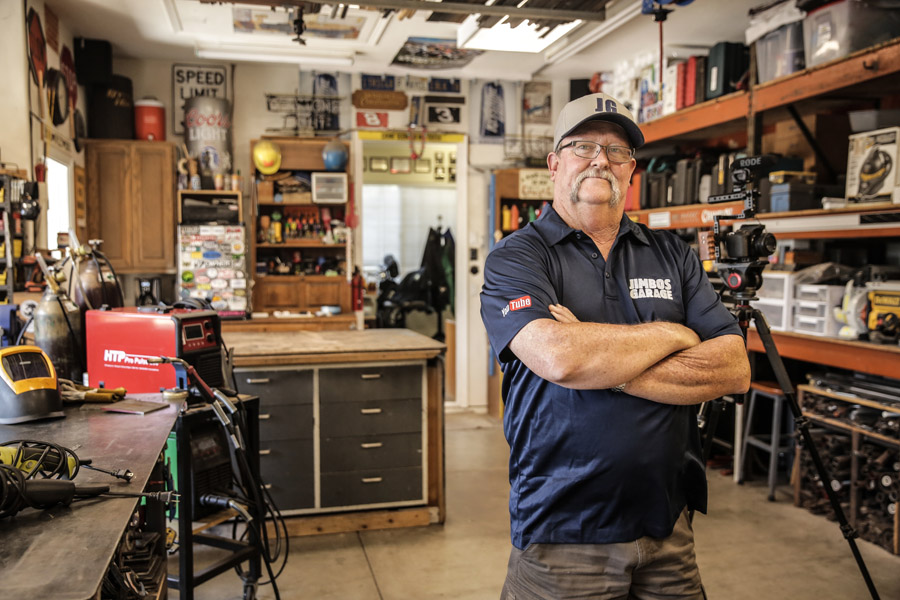 Jim Wright wasn’t one to seek out the limelight. In fact, he’s always shied away from it – up until about three years ago, that is. And while his personality hasn’t necessarily changed since then, his aversion to doing anything remotely close to being the center of attention has evolved.

Wright is the personality behind “Jimbo’s Garage,” a YouTube channel established in January 2015 that’s dedicated to helping people, mostly do-it-yourself-types, navigate their way around tools, including welders, in the shop. Wright’s channel, as of early November, has more than 39,000 subscribers and his videos have more than 3.7 million views.

“To be honest,” Wright says, “I never expected it to get this much traction in such a short period of time. It is definitely moving in a positive direction and we’re very excited about it.”

His most popular video to date, which covers how to build a table saw table, has nearly 400,000 views. However, his target audience, or at least the audience that targets his channel, is welders.

“If it makes sparks and fire,” he says, “that’s what they like, and I’m okay with that because that’s what I really like, too.”

As a child, Wright was the type of curious youngster who would take apart a lawn mower for fun, then reassemble it. He built bicycles and many other things – he was a “maker.” His father wasn’t necessarily mechanically inclined, but Wright found himself to be something of a natural at it. He’s self-taught in almost everything and as he says in his videos, “I figure things out as I go.”

Wright picked up some tricks of the metal fabrication trade in high school by taking several metal fabrication courses, moving up to teacher’s assistant in one of the classes. Right out of high school, the Orange County, Calif., resident got a job as a welder and held that position for a couple of years before moving on to construction. He is now the owner of a concrete contracting business.

His entry into concrete began after he and his wife bought a home with no patio or walkways, and you can probably guess what he did next – he learned how to build them himself.

Before long, neighbors sought out Wright’s help with their concrete projects, which gave him more experience. He earned his contractor’s license and built up a business of his own.

“It’s been a good life for me and it’s been enjoyable, but my passion is building things and making things,” he says. Wright’s business now runs itself, allowing him to put more time into his YouTube videos.

Hardly a day goes by that Wright isn’t in his shop building something, which is why Dane Wagner, his soon-to-be son-in-law who works in video production and as a filmmaker, came up with an idea to bring a camera into the shop to film Wright doing what he loves to do. And maybe, if it was interesting enough, create a do-it-yourself channel on YouTube.

There is something in Wright’s voice as he recounts this proposition by Wagner that indicates he might not have been totally receptive to the idea. After all, this is a person who was always too sheepish to get up in front of the class as a student.

“The very first video we ever did,” begins Wright, “I was so nervous. It just wasn’t me. But as time went on, things started to become natural. I was just being myself. I’m getting better and moving along, but a lot of that has to do with the feedback I’m getting.”

Wright’s viewers see him as a “regular guy,” and they tell him he comes off “very natural.” That probably explains why 99.9 percent of the comments on his videos are positive, Wright believes.

Wright films about 90 percent of his videos now on his own. He took cues from Wagner early on, getting a lesson in some of the technical aspects of running a camera. Despite those hints and tips, Wright’s gone through a few lenses due to sparks flying too close to the camera.

There is no script to follow. Wright comes up with an idea in his head, figures out how it needs to be built and which materials and tools will be appropriate for the job, sets up the camera and goes for it.

He doesn’t mind poking fun at himself, either, as is evident in more than one of his videos containing a blooper reel. Wright’s even dedicated an entire episode, called “Shop Mishaps,” to bloopers.

“Hopefully,” he says chuckling, “the project turns out the way it’s supposed to. In most cases it does, but there are hiccups. But that’s part of fabrication – it can’t be perfect all the time.”

Wright is a consumer of other YouTubers videos, learning what he can about fabrication from people like himself. He has professional welders who chime in every day on the projects posted on his channel, sometimes to offer tips and other times asking for advice.

“I get valuable advice,” he says. “Good ideas come from people who do this full time.”

Wright is constantly getting requests to cover various projects, including several from welding beginners, so he produced an intro to welding video that gives them the pointers they need to get started.

The So Cal way

As a born and raised southern Californian, it’s no surprise that Wright prefers a wardrobe that’s almost exclusively t-shirts, shorts and sandals – not exactly the ideal attire for welding, but it’s perfect for year-round warm temperatures.

“It’s not a good practice,” concedes Wright, who’s never had a major injury in his shop. “But I think my viewers get more of a charge out of that. There’s no negativity about it. It’s not something I mean to do; it’s just the way it is here. I come out here (to my shop) every day. I wear shorts and sandals and away I go. I’m not trying to defy safety by any means; I’m just comfortable.”

Wright says that knowing his following has expanded, especially over the last six months, he wants to set a good example, so viewers are more likely to see him in his newer videos wearing protective clothing while welding.

“Lately I’ve been taking safety measure to more extremes,” he says. “I’m wearing gloves and safety sleeves and a jacket when I’m welding. I’m getting more focused on that as I know there are thousands and thousands of people watching my videos.”

Jimbo’s Garage averages one video per week, maybe two if they have time. Wagner and Wright spend hours and hours to produce a 10- or 15-min. video. And lately, they’ve had to become a little pickier about what topics they cover as the requests keep piling in.

“We’re backlogged on video ideas now,” Wright says. “I have people coming out of the woodwork wanting me to do all kinds of things. We have to be a little selective now.”

Wright sees the younger generation moving away from the type of work that makes him so happy, but he hopes his videos inspire people who might enjoy what he does to “just get out and do something. Build it. Make something – be a maker.”

Things are moving fast now for Jimbo’s Garage and sponsors are beginning to take notice. Whatever the future holds, Wright is ready for it, as long as it involves him continuing to be a “maker.”

“Dane and I try to focus on really good content,” he says. “We just want to produce something that people want to see.”