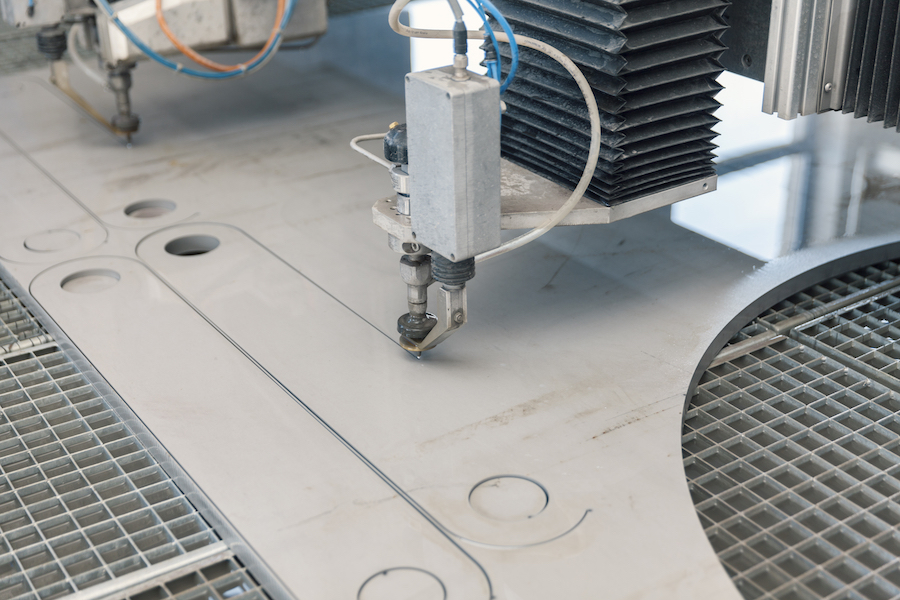 The waterjet cutting machine is one of the most important pieces of equipment that custom metal fabrication company WB Industries utilizes on a daily basis. Between the intricate, detailed cuts the machine is able to perform and the variety of materials that can be cut, the waterjet is as critical as any piece of equipment on the floor.

It hasn’t always been this way. I remember the days before we had a waterjet in-house and how it came to be that this piece of equipment turned into something that would be difficult to live without.

Roughly 25 years ago when I first came to WB Industries (known back then as Willerding Metal Fabrication), there was a CNC plasma cutter being used on the shop floor. At the time, I was curious and asked those in charge more about the plasma cutter and its everyday use. Their answer was pretty straightforward. We needed it to cut some metal, primarily steel, into various shapes.

The company was taking on jobs in which specific shapes were required and the plasma cutter was the best option. It was a cheap and quick way to achieve the cuts needed, but management hadn’t had the time or inclination to dig deeper into the machine’s capabilities to maximize its usage and its real value.

The plasma machine was manufactured such that without much complication, it could cut standard shapes. It was pre-programmed to cut a library of shapes within minutes of setting it up. All the operator had to do was enter a couple of dimensions, and they would be able to cut any part they needed. There were shapes, however, that needed to be cut that weren’t a part of that library. This led some to believe that the plasma cutter had limitations concerning shapes, which wasn’t necessarily true.

After studying what could be done with the plasma cutter, I was confident the machine had value in our shop. With proper programming, it could handle almost any shape and cut steel all the way up to 1 in. thick. This was where the real limitations were, in the material and thickness that could be cut.

Due to the way it was built, a plasma cutter was optimized mostly for steel and could do a little aluminum and stainless steel. Unfortunately, it couldn’t cut anything that wasn’t metallic because it relied on an electrical circuit that had to be made with the material. However, considering the types of jobs being undertaken, we used it often.

At this point, the company believed our future was in plasma cutting, so much so that we invested in a second unit. However, that plan quickly took a different turn. There were multiple problems that manifested with the newer machine. It displayed problems with quality if it wasn’t set up by an experienced operator, which we seemed to lack more and more often.

Also, it was difficult to keep the settings dialed in perfectly, and we were burning through consumables on the machine faster than we should have. Finally, it just became too expensive to run. On top of all that, the old machine had officially worn out.

At that time, plasma cutting wasn’t considered as much of a specialty anymore, so rather than perform the cutting ourselves, we decided to outsource the work. Subsequently, the company made the decision to get rid of both machines.

At that point, our shape cutting needs began to shift. We were seeing that there wasn’t as much need to only cut steel. Rather, we needed to be able to cut more complex shapes out of all kinds of materials. Thus, another decision would have to be made about the work we were performing.

Initially, we wondered if we really needed to invest in another CNC shape cutter or if we could simply continue to outsource this work. And for a couple of years, we did outsource it. But then, the cost of getting the work done became too high, and it was too much to manage the back and forth.

We’d get parts back that were cut well but the shape wasn’t quite right. Other times, the shape was correct, but the cut quality was lacking. Additionally, more and more of our fabrication required odd, specific shape cutting of various materials. We weren’t doing high-production runs of any one product, and we needed to cut more than just steel. We needed to have the ability in-house to do non-production parts like templates and fixture pieces. The bottom line: We needed to acquire a waterjet cutter.

Because of the enormous investment in time, money and space, this was not a decision that was made in haste. After strategically laying out what our business looked like for the foreseeable future, we decided to take the plunge. And that we did, but not before identifying several factors that made a waterjet cutter the right choice for us.

The biggest advantages the machine offered were accuracy and versatility. Not only can it handle many different materials (plastic, foam, wood, steel, aluminum), it can also perform in a variety of different thicknesses, even up to 6 in. Any shop that fabricates very custom pieces, often in a one-off approach, a waterjet cutter is ideal. By having these capabilities in-house with such an accurate piece of equipment, we could significantly cut down lead times on jobs.

Another advantage is the reduction of secondary work that the waterjet offers. With a plasma cutter, one might have to go back through a hole that was just cut with a drill bit to round the edges. One also may have to use a hammer to remove the slag left behind during the cutting and then deburr the cut. Furthermore, if that hole needs an additional operation, such as tapping threads, a plasma cutter may not even be an option because of the heat it generates.

The heat from plasma cutting can harden the edges of the steel where it is cut, making subsequent drilling, tapping or reaming operations difficult. A waterjet, on the other hand, simply uses water and abrasive under great pressure to make the cut, so a part heating up is not a concern. It also produces good hole quality and no slag, eliminating those secondary operations.

Also, the waterjet cutter allows us to prepare the materials beforehand and create aides, templates and fixtures. Because of the waterjet’s accuracy, we can use a technique called “tab and slot” to allow various smaller sized pieces of plate to be joined together like puzzle pieces to create a much larger design that can be subsequently welded, all with tremendous accuracy.

At WB Industries, we do a large amount of work in the aerospace industry. We build and install product solutions in local, national and international manufacturing facilities, military bases, aircraft carriers, public areas and within the country’s infrastructure. We apply customer specific requirements to our projects to a variety of industry standards, including NASA, Boeing, Aerospace Material Specifications and the American Society for Testing and Materials, among others. For aerospace work, we are required to create some very odd shapes of welded tubing, pipe and so on.

This is another place where the waterjet offers a distinct advantage. Take, for example, a weldment made from pipes that will be positioned 6 ft. off the ground, but the structure is oddly shaped, containing no 90-degree angles or easily measured dimensions. The welder is thinking, “How on earth am I going to put this together? There’s not a straight line anywhere.”

In this situation, we can take our CAD program, create templates and then, depending on the shape, cut an accurate reproduction in full size on the waterjet. We’ll then take that template out to the shop, lay it on the shop floor and start to lay out the assembly. This gives us the confidence that as different pieces are put in place, they’re in the right space. Without that, it’s difficult to build such odd shapes.

That’s not to say the waterjet is perfect. Compared to other methods of CNC shape cutting, such as plasma and laser cutters, it runs slow. This means if a fab shop is running a lot of something, they’ll likely want to consider a different method. Furthermore, it can be expensive to maintain.

For example, its various components need to be maintained, and the tanks must be pumped out as they fill with garnet, the abrasive mentioned earlier. The maintenance work itself can be expensive and the time dedicated to upkeep must be considered. But for a job shop that does one-off, fully customized work and needs to cut a variety of materials, the waterjet is highly recommended.

At WB Industries today, we use our waterjet in every department. We use it for fabrication, custom tools, wood box making and maintenance. We’ll even cut a wrench out of a piece of stock plate if necessary. All of its functionality helps us keep costs low for our customers, maintain our high standard of quality and reduce lead times as much as possible.