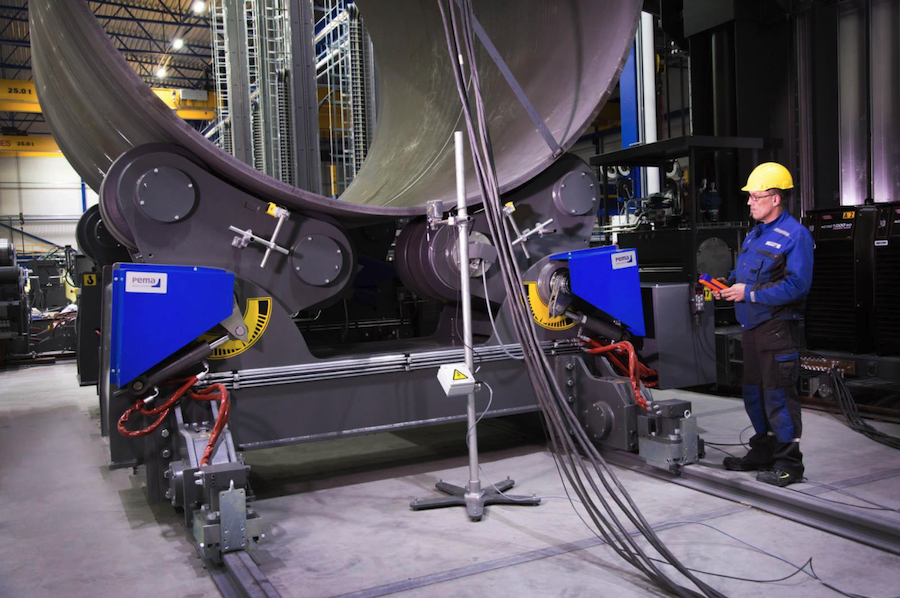 Despite manufacturing processes increasingly being automated, there is still a need for welders with a welding gun in hand, perched over a joint making clean and uniform

welds. However, there are situations where manual welding and completely automated welding solutions can be utilized in a two-step process.

Such is the case with manufacturing tanks and vessels. Most people assume manual welding will be used on the nozzles of tanks and vessels, as has traditionally been the case. For Pemamek, a heavy welding and automation solutions provider, manual welding is still a part of the process, but a recent development has automated nozzle welding tasks.

Pemamek is known for developing roller beds for positioning large workpieces, including those that are used to build massive wind towers and other large products. The family-owned company, headquartered in Finland, introduced its first large positioner in 1970, the year of its founding. Automated and robotic solutions were introduced 10 years later and by 1990, automation became the core of the company’s business.

Most tanks and vessels require nozzles where piping can be connected, allowing liquids and other materials to enter and exit. The nozzles require technical welds that must adhere to strict standards, particularly in pressurized vessels. This adherence is typically carried out meticulously in a manual welding process. However, Pemamek has created automated technology that makes the process much more consistent.

“When you go to thicker materials, there is more to weld,” Lauri Paasio, application manager at Pemamek LLC, says of the average nozzle. “Doing this manually is quite time consuming and it’s strictly regulated, so you have to be a certified welder to make those connections.”

Because nozzle welding is often a multi-pass procedure where the welder is forced to frequently reposition themselves, it’s a technical and time-consuming task. Given the ongoing skills gap, Pemamek’s new Pema Automated Nozzle Welding solution is a welcome addition in shops where finding qualified welders is increasingly difficult.

With laser scanning groove technology, which is a major component of the nozzle welding technology, manufacturers can develop a pre-made weld pattern, which dramatically improves weld quality. The defect rate is also substantially reduced, and the welds are much more consistent than those completed manually.

Adaptive multi-layer welding and easy offline programming are also components of the nozzle welding technology that improves the speed and accuracy of the process.

As the market for high-quality tanks, vessels and towers has become more demanding, staying on top of production requires a faster, more efficient approach. Traditionally, the large workpieces involved in the manufacture of these products are positioned using a series of overhead cranes, which is a slow process that also lacks in meeting safety protocols.

Pemamek has taken all but one crane out of the equation by bringing in its roller beds to hold the workpieces in place and rotate them as needed, either automatically while an automated welding unit makes all the welds or via a manual welder with a remote pendant.

For tanks and vessels, each separate thin-walled, large-diameter round is referred to as a “can” or shell, which needs to be positioned exceptionally close to the shell to which it’s to be joined. The process begins with a crane hoisting the shell to the fit-up unit on the roller beds, which pushes the shell against another section of shell that is sitting on top of an idler unit. A separate power unit rotates both shells as the weld is being made. See the video for a demonstration of how each unit works in the assembly line.

Initially, a welder working manually inside the shell sections tack welds the pieces together, using a remote pendant to rotate the pieces as needed. Paasio says the human hand and eye are the perfect tools for making sure those first welds are made correctly, which is why that part of the process has not been automated.

“Manual tack welding inside of the shell sections is only a small part of the whole process,” Paasio says. “It does not cause a bottleneck in this production. It’s faster to do it this way because it would take more time to align the robot and teach the robot to make the welds.”

The roller beds have an important role in the manufacturing process, as shells comprised of thin metal lose their shape when held horizontally on the roller beds. Pemamek’s support arm technology utilizes rollers on the arms at the sides of the shells to help them keep their shape. To make sure the weld is accurate, a seam positioner at the six o’clock position on the shell keeps the material from sagging and offers a tighter joint for a higher quality weld.

After the shells are tack welded together, the automation takes over utilizing Pemamek’s column and boom technology, which is based on a user-friendly control system that allows a single operator total control of the positioning and welding process. The column and boom are integrated with the roller bed units, creating an automated material handling and robotic submerged arc welding process.

The automation is possible in part because of Pemamek’s Pema WeldControl software. Paasio says WeldControl 100 and WeldControl 500 are modules best-suited for tank and vessel production.

“WeldControl 100 is the standard for our column and booms,” Paasio says. “It’s easy to use and it’s integrated into the assembly line. For thicker materials, say 2 in. or more, WeldControl 500 has more functions for heavy thicknesses, better multi-layer features and adaptive welding. It also has laser seam tracking.”

Overall, Pemamek has developed these technologies so that one employee can handle the entire assembly line. Paasio says that manufacturers that choose not to use automation must have multiple employees working on one section and that it can take 4 hours to properly weld each section. With the Pemamek method, it takes 30 min., and there is only one employee involved.