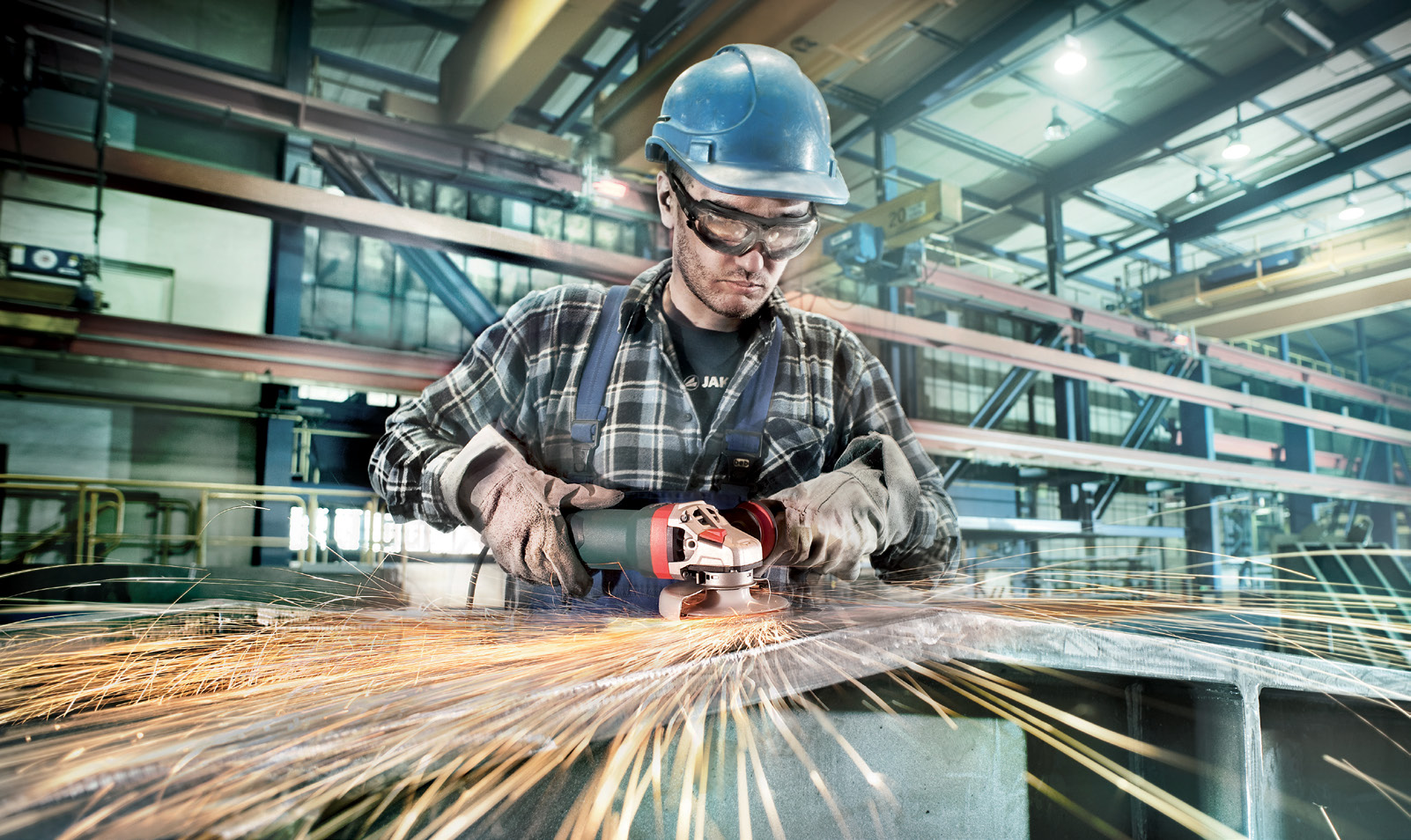 Hand-held power tools have changed dramatically over the years, becoming smaller, lighter, safer, more ergonomic and much more powerful. Nowhere is this truer than with angle grinders. The modern angle grinder has become the most versatile tool in the shop, due in part to having considerably more power than its predecessors.

The increased power has given rise to new accessories for the grinders, extending the range of applications. Small angle grinders accomplish grinding, deburring, cleaning, brushing, sanding, finishing, beveling, polishing and shaping, all with a variety of accessories and each with specific power and safety requirements.

Take into consideration that brushing, sanding and polishing applications put a higher load on the grinder and need more torque from it than light grinding or metal removal. Using an underpowered grinder on a demanding application creates overload conditions that can damage the motor components and lead to premature failure of the tool.

“On the other hand,” Tuerk notes, “higher power comes with a bigger, heavier tool, so if the application is simple deburring or light beveling, a grinder with lower power and lighter weight could suffice.”

Some manufacturers offer a “high torque” version of their angle grinders, adds Antoine Derché, director of product and marketing at Metabo, which uses gear speed reduction to mechanically increase the torque delivered, making the tool more suitable for heavy sanding and polishing applications, such as concrete grinding, stone polishing and stainless preparation.

Another key in choosing an angle grinder is to ask where it will be used. In any situation where the operator must make more than four steps, a cordless angle grinder
is recommended to avoid tripping hazards such as extension cords and air lines and to avoid the use of a generator.

Other important features to look for in an angle grinder include ease of use, ergonomics and safety. The accessory on the angle grinder spins anywhere from 9,000 rpm to 11,000 rpm, or at nearly 200 miles per hour. When a typical grinder is shut off, the accessory spins eight to 10 seconds or longer before it comes to a stop, creating a period of time in which an injury might occur. A mechanical safety brake stops the accessory in one to two seconds, greatly reducing the likelihood of a “brush by” injury or a runaway wheel.

While several angle grinder manufacturers include a brake feature, Metabo’s is a mechanical brake. It has been tested to more than 50,000 cycles without failure. “Other manufacturers utilize electronics to slow the accessory,” Tuerk notes. “While useful, this might be unreliable in the event of an electrical outage or failure of an electronic component.”

A grinder also needs a locking guard that is easily adjusted to positions needed for grinding and cutting. The guard should easily move, yet lock into position to prevent it from opening toward the operator if a wheel should come apart. The guards used on corded and cordless Metabo angle grinders lock in seven positions.

It is never acceptable to use an angle grinder without a guard, yet the guard should be easily removed to attach another accessory, for example, a Type 1 guard that is required when using thin cutoff wheels.

The side handle is another component that should always be used to maximize the safe use of an angle grinder. Look for a side handle that reduces the stresses on the hand; vibration reduction and an offset angle of 15 degrees is much more comfortable for the operator and prolongs the time an operator can use the grinder without fatigue.

Job sites are evolving as safety has become most important, placing demands on power tool manufacturers for more and better safety features. OSHA allows locking switches on an angle grinder as long as the same finger that turns it on can turn it off.

Angle grinders are used not only in the shop, but are found on construction sites, such as on steel erection or in plant maintenance working at heights. Any tool, be it a simple hand tool or a power tool, is a danger to workers below if the tool is dropped.

Increased attention is being paid to the safety in “drop zones” with the industry asking for solutions to prevent dropped tools. Any operator working high up with an angle grinder, Tuerk says, should consider a grinder with a “drop secure” system of a tethering point and a mechanical brake. Tethering the tool prevents the tool from falling if dropped, and the mechanical brake can prevent an injury or property damage by stopping the wheel, even if the tool becomes unplugged.

Less visible than the guard or side handle, yet just as important, says Tuerk, are safety features built into some angle grinders that lessen or prevent the possibility of injuries.

Metabo is an innovator in additional safety features found in angle grinders. In 1966, Metabo introduced the first “one handed” 4.5-in. angle grinder, the name being due to the size of the tool compared to the large angle grinders in use at that time.

“Metabo engineers realized that more safety features would be needed if they called the tool ‘one handed,’” Tuerk says. “Therefore, a mechanical slip clutch was engineered into the grinder.”

The S-Automatic mechanical safety slip clutch is exclusively found in most Metabo angle grinders (although, they no longer use the “one handed” designation).

Since 1966, the mechanical slip clutch has prevented or lessened the chance of injuries from kickback, which is a leading cause of angle grinder injuries, Tuerk notes. The slip clutch absorbs the forces that create kickback. This allows the operator to maintain control of the grinder in a situation where the wheel or accessory has been bound. By absorbing the reaction torque, the slip clutch helps to prevent wheel breakage.

Excellent ergonomics are vital when choosing an angle grinder. If the grip circumference is too large or the design is uncomfortable in the hand, the operator experiences early fatigue and possible long-term disabilities like carpal tunnel syndrome.

Vibration is also a cause of long-term disabilities of the hand and arm. Vibration white finger or HAVS (hand arm vibration syndrome) is caused by long-term, repeated and frequent use of hand-held tools that vibrate.

HAVS causes nerve damage resulting initially in tingling or numbness in the fingers and can lead to permanent damage, called Raynaud’s phenomenon. Raynaud’s phenomenon results in changes to the blood vessels causing white fingers, and muscular aches and pains.

“Who hasn’t busted a knuckle while trying to break free a tight grinding wheel?” Tuerk questions. “The wrench isn’t always conveniently nearby, and users use pliers or grab the wheel by hand to break it free, which is not a safe practice.”

Finally, a quick-change system for changing the accessory provides ease of use. A quick wheel change system is not only safe and easy, but saves time and money by keeping the angle grinder on the job.

Taking into consideration each of the features discussed in this article before making a purchase decision can ease the process. Choosing the correct angle grinder with the right features for the application will create a safer, more pleasant and more productive workplace.