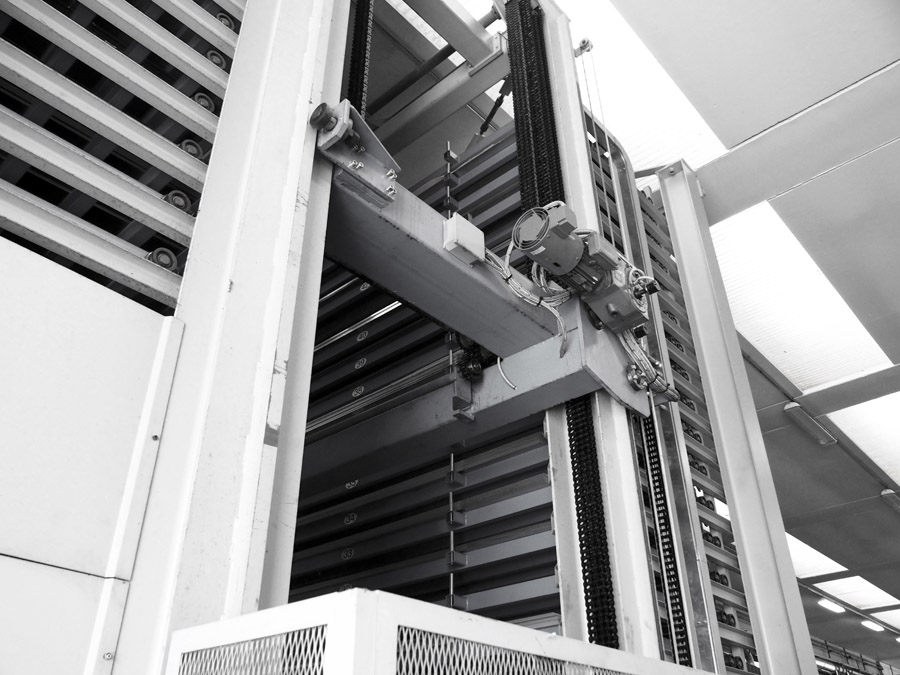 “With standalone shuttle tables, the beam on time is 52 percent,” says Adam Smelewski, national sales manager at Mazak Optonics Corp. “By advancing to a load/unload system, however, the time increases to 75 percent. With a flexible manufacturing system (FMS), it grows to 92 percent beam on time.”

But automation is not a one-size-fits-all solution. The key concerns when implementing automation are floor space, ceiling height, material flow, overall cycle time, and accessibility to the machine and finished parts. These constraints can leave fabricators trapped by the restrictions of the automation system but, fortunately, solutions are available. 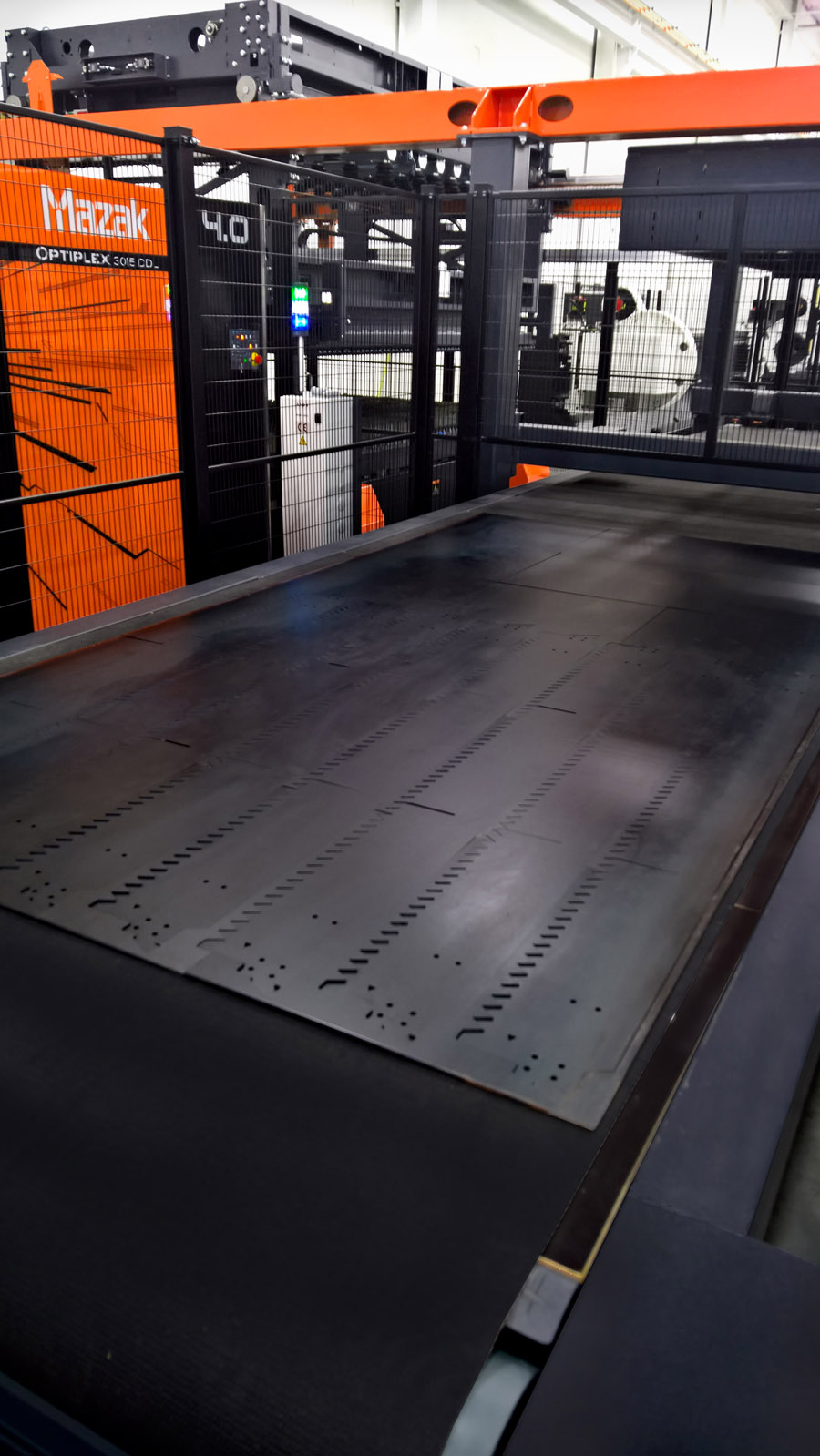 A conveyor enables reverse flow of parts back to the laser operator.

Typically, a laser cutter is not the first piece of machinery that goes onto the shop floor. Quite frequently, the laser, or the addition of automation, is restricted to fitting into existing floor space. This situation can vary depending on the shop’s floorplan.

A common setup involves a laser that is placed in a corner or against a wall, which requires material loading and unloading to take place in the same location. Another situation where floor space restrictions are an issue is when an automation system only has room to fit behind the pallet, laterally, instead of horizontally next to the pallet. Furthermore, the laser and automation could be next to an aisle way, leaving no room to go sideways.

For fabricators who know these floor plan issues all too well, automation equipment is available in a variety of different shapes and sizes to fit almost any footprint.

As one example, Mazak offers its Quick Cell for corner locations or other wall constraints, which offers the ability to have the loading and unloading coming from the same side of the machine. Furthermore, Mazak’s Lateral Compact system has a more linear footprint, allowing it to fit along an aisle or in other narrow workspaces.

Unfortunately, floor space isn’t the only space restriction that fabricators have to deal with. Ceiling height is another situation that could inspire fabricators to get creative with their limited space. In some instances, making the most of overhead space is critical.

Automation can have more than one purpose. At times, it’s specifically used for loading and unloading, but when a tower is in place, automation can also be used for storage or even just to get material off the floor. Being able to maximize ceiling height allows more material organization.

“When you are trying to maximize ceiling height, Mazak’s Laser Flex solution is a good option to consider,” Smelewski explains. “It offers the most shelves per foot of ceiling space.”

The Laser Flex can also be customized according to customer needs. Customization is available for material stack height and number of shelves all with the same goal: to make the most of the available vertical space. 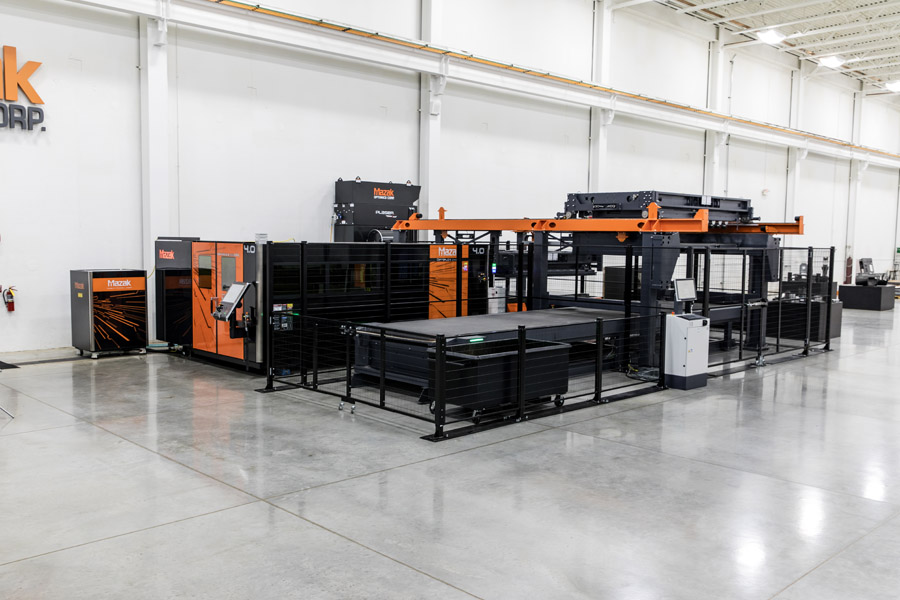 The Mazak OptiPlex DDL is outfitted with a Laser Flex automation system as well as a conveyor, offering operators easy material handling.

Beyond machine loading and unloading and storage, automation can also facilitate the way in which material is delivered to downstream operations. For some jobs, raw material is put into the machine and processed, then the part is taken off and shipped to the customer. But there are many cases when parts flow through the entire factory floor – from the laser then off to secondary processes, such as bending, welding or finishing.

Once the material is cut, there are a few different scenarios to accommodate for. First, a laser operator might be sorting cut parts and sending them to a secondary operation. Second, an operator could be running multiple machines where cut parts are sent to a different station for someone else to sort. Unsurprisingly, the flow of the fabrication shop can impact how the automation is formatted.

Just as needs can vary, so do solutions. A fabricator could set up automation with a reverse flow where a conveyor sends processed material back to the front of the machine. For pass-through operations, automation could come in the form of carts or conveyors that send parts to the back end or the side of the machine. 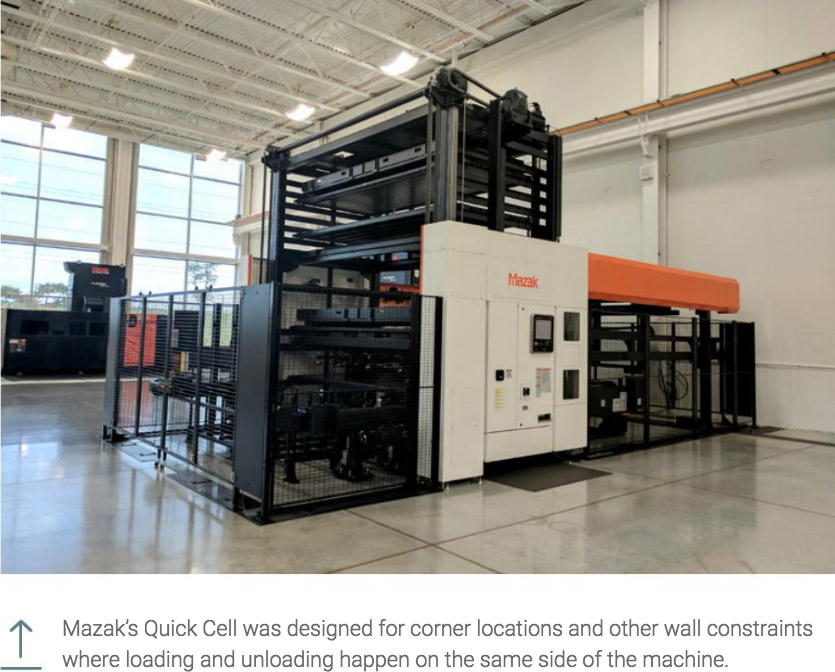 Another consideration is the speed of the laser. With fiber lasers speeding up the cutting process, automation should not be the bottleneck. Fiber lasers can cut anywhere from two, three and even up to 10 times faster than CO2 machines, and direct diode lasers (DDL) are cutting at even faster rates.

“Since the inception of fiber and DDL lasers, ensuring that automation can keep up has been a major concern,” Smelewski says. “Nesting times are going way down with the speed of these lasers – and even more so with how fast the power levels of fiber and DDL lasers are progressing. Having a faster automation cycle time means more beam on time for the laser. Mazak offers multiple automation solutions that are all under 60 sec.”

Being able to get finished parts off of a machine and out of the automation cell is another situation that could be a priority. Quick manual access to a completed nest means getting processed goods off to the next process sooner without disrupting the cutting process as it continues.

This is a common occurrence with job shops that receive a hot job and need to break in between automated runs. Getting material on the machine, processed and taken off as quickly as possible can be a major challenge for shops.

The solution, without slowing down the laser, is to add conveyors or carts to the automation system to get the processed parts off the machine quickly without interfering with the cutting. This is because they are outside of the automation’s safety zone so sorting through parts and skeletons can be completed while the laser and automation continue to work.

Clearly, every fabrication facility has different needs and challenges. Understanding those different requirements is key for automation system builders.

“Listening to the concerns and knowing that each project is unique helps Mazak customize automation solutions to best fit customer needs,” explains Naoko McIntosh, automation specialist at Mazak. “The fabrication market has tremendous diversity for such a niche industry. Knowing that, Mazak takes a partnership approach to create an ideal automation system that best suits each individual scenario.”

Being able to create an automation solution that works best for the customer’s workflow will, ultimately, return the best results. Therefore, Mazak offers configuration possibilities through its extensive and customizable automation solutions. No matter the automation OEM, make sure that the system fits the requirements and is able to keep up with the pace of fiber laser cutting machines.