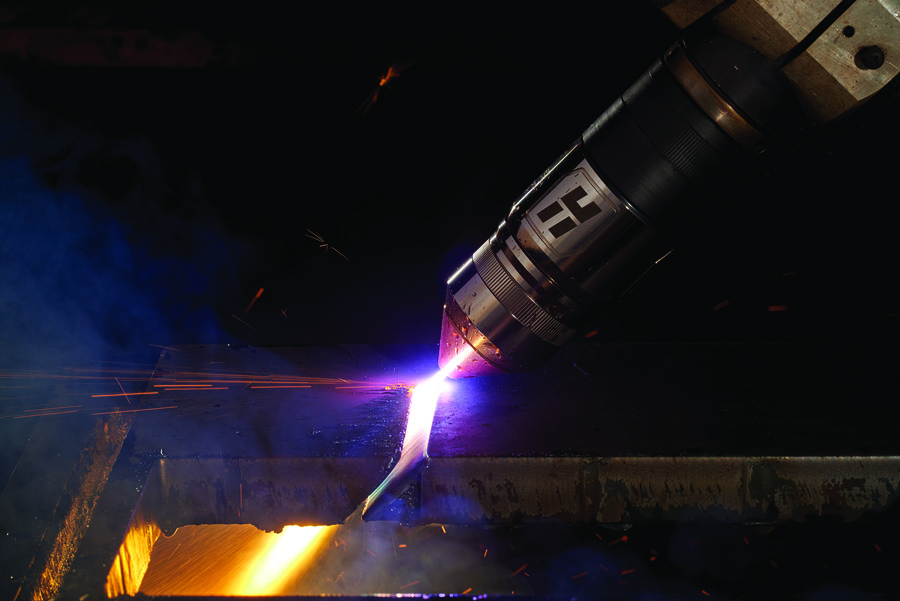 When Murray Regehr began working as an apprentice welder for Courtney Berg Industries in 1977, the Alberta, Canada-based business constructed agriculture products, including grain boxes, grain elevator lifts and truck hoists for Canadian grain farmers. Compared to today’s standards, the metal fabrication tools they used back then were archaic.

Today, the company is called CBI Mfg. and, unsurprisingly, a lot has changed since Regehr’s early days. The company’s footprint has grown – both in terms of physical square footage as well as product offerings. For Regehr, he’s risen through the ranks from apprentice welder to president, and throughout it all, he’s witnessed the evolution of the organization first hand. It has also become a family affair, as Regehr’s wife, three sons and nephew manage the business.

“Back in ’77, when I started working,” Regehr began, “we used a shear for cutting all of our sheet steel, and although it worked fine, it created a lot of waste. It was a huge issue.”

The other major issue with the shear was that it only cut in a straight line – not the best scenario for a job that requires shaped parts. The material had to be extensively handled and maneuvered with each new cut.

When business began ramping up around 20 years ago, CBI Mfg. began researching plasma cutting tables and was impressed with what Hypertherm had to offer, as was Regehr, who has stuck with the brand for 20 years. The first acquisition was a Hypertherm HPR130 with an 8-ft.-by-20-ft. cutting table.

“We were getting busier and we saw a need to expand,” Regehr says, adding that the company bought a new building as part of the expansion. “We decided to invest in new technology back then to try and take ourselves to the next level.”

With the new 70,000 sq. ft. of shop space on six acres of land, part of taking the company to the next level involved branching out into new product areas. CBI began  manufacturing oilfield-specific products, which included oilfield decks for trucks. Shortly thereafter, the company began manufacturing pump trucks and mud tanks, also for the oilfield industry. By 2007, CBI was building complete service rig packages, all of which wouldn’t have been possible without taking that initial jump into new technology.

“Without our plasma cutters,” Regehr says, “we wouldn’t have an oilfield division. We build the complete rig from the ground up and that includes powder coating and assembly. We wouldn’t be able to do that without a plasma table.”

The workhorse at CBI that Regehr is referring to is the Hypertherm HPR400XD, which has a versatile 400-amp system. In addition to its integral role in product production, it has allowed CBI  to reduce material waste. But perhaps more importantly, its versatility has helped to inform CBI engineers working on new designs.

“We are able to produce more higher quality parts and do some robotic welding that we wouldn’t have been able to do without this plasma cutter,” Regehr says, adding that CBI is also cutting tabs into the material to “put everything together like a jig saw puzzle.

“We’ve basically been able to take the tape measure away from the tradesmen on the floor,” he says.

“At the time,” says Tyler Kipp, Hypertherm’s marketing program manager – heavy industrial business team, “the HPR was notable for offering high-definition cut quality at speeds that were twice as fast as the HD1070.”

Five years later, Hypertherm introduced its first HPRXD system, which included notable new technologies such as PowerPierce technology, which used a liquid cooled shield to repel molten metal during piercing, maximizing pierce capability up to 50 mm on mild steel and more than 75 mm on stainless steel. Additional technologies launched at the time and still used today include True Hole and True Bevel.

“True Hole technology optimizes hole cutting by virtually eliminating taper and the dings and divots that are sometimes produced during plasma cutting,” Kipp says. “This, in turn, makes the creation of bolt-ready holes on mild steel much easier. Furthermore, True Bevel technology takes the guesswork out of bevel cutting processes, improving accuracy and consistency on mild steel cutting.”

In 2015, CBI bought a manufacturing company located in Manitoba where the company recently installed a Hypertherm XPR300, which Regehr says they’re still dialing in at the new location. According to Hypertherm, the XPR300 offers ease of use through intuitive operation and automatic monitoring, full control of all functions and settings via the CNC, automatic system monitoring and specific troubleshooting codes for improved maintenance and service prompts.

Regehr is expecting the new machine to offer better cut quality and tighter tolerances than the HPR400XD, which is consistent with case studies from Hypertherm. Other companies that have acquired an XPR300 achieved a significant boost in production without compromising on quality.

The machine is also paving the way for reduced manpower required to produce parts. Yet another perk of the speed and accuracy of the machine is that manufacturers are able to take on work they would have said “no” to without it.

Kipp refers to the XPR300 as an X-Definition Plasma system, which is a “step up” from high-definition class plasma.

“We consider X-Definition Plasma to be the most significant advance in mechanized plasma cutting ever,” Kipp says, “as it combines engineering advances and refined high-definition plasma processes to deliver better than high-definition cut quality on mild steel, stainless steel and aluminum.”

In order to reach this level of technology, Hypertherm engineers had to develop a number of new processes, such as Vented Water Injection, plasma dampening and vent-to-shield technologies.

“When compared to a HyPerformance system,” Kipp says, “for many processes, the XPR cuts faster and uses power more efficiently. In addition, customers gain greater piercing capability thanks to increased power and its exclusive argon-assist process.”

Kipp says CBI can expect a dramatic boost in consumable life and cut quality due to what Hypertherm calls a Cool Nozzle, which is a patent-pending technology that absorbs the pressure and flow fluctuations that create arc instability during cutting with lower current.

Hypertherm engineers also worked to add 21st century communication features, such as sensors and Wi-Fi to monitor and communicate performance.

“This reduces troubleshooting time and provides proactive data to improve performance and system uptime,” he says. “Additionally, the system is designed with fewer consoles and connections to make setup easier. For example, an EasyConnect feature allows operators to quickly plug the torch lead into the torch connect console without the use of tools, while a patent pending QuickLock electrode delivers easy quarter turn tightening to further reduce setup time.”