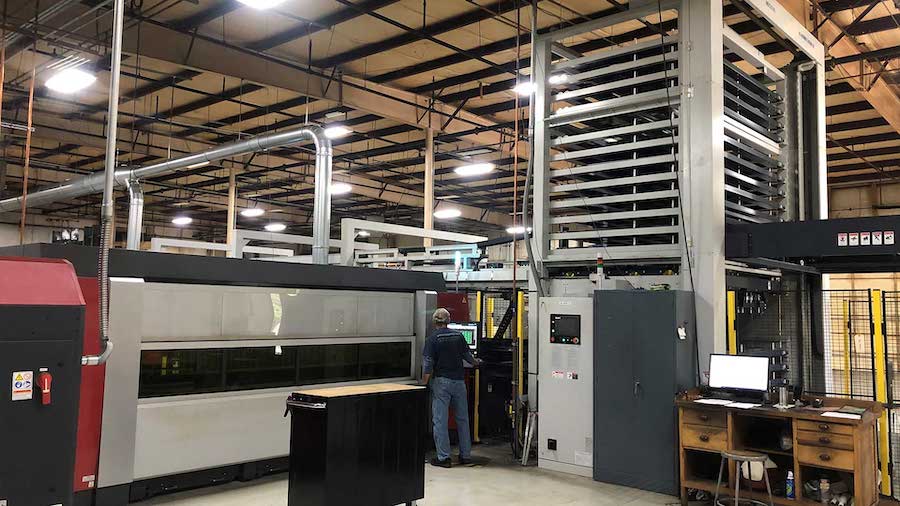 Founded on the premise of stress-free sourcing, Staub Mfg. Solutions of Dayton, Ohio, is known for its ability to deliver high-quality sheet metal components and complex welded assemblies. With 50,000 sq. ft. of manufacturing space across two facilities, this ISO 9001:2015 fabricator excels at on-time delivery of everything from brackets and mounts to enclosures and display stands, and works in a variety of materials.

As such, they have a long history with laser cutting. Co-owners Steve Staub and his sister Sandy Keplinger bought their first CO2 laser machine nearly 25 years ago, right after they founded the company. A few years later, a mating machine came along, with a third CO2 from another manufacturer arriving in 2005. And while those machines easily paid for themselves, Staub’s initial experience with fiber laser technology had a less than happy ending.

Although he’s not sharing the brand name, Staub says they spent just over $1.5 million on an 8-kW fiber laser cutting system in 2015 that was

out of service nearly 40 percent of the time.

“The manufacturer blamed our gas quality, but neither the CO2 machines we already had nor the competing brand of fiber lasers we’ve bought since have had any problems,” he adds.

The competing brand he’s referring to is a pair of 6-kW Mitsubishi lasers from MC Machinery Systems Inc., both attached to the manufacturer’s SmartFlex Rapid Tower system. The automated sheet loader boasts a 52-sec. load/unload cycle time (3015 model), can support up to four lasers simultaneously, and supports up to 11,000 lbs. of raw material or finished goods on each of its carrying carts.

“After fighting with that first fiber laser for what seemed an eternity, we sold it along with our CO2 machines,” Staub says. “We went from four to two machines but have increased our capacity by at least 25 percent since then, and we no longer have to worry about missing a delivery date due to the laser going down unexpectedly.”

Staub and Keplinger have also improved a significant share of their 50-plus employees’ personal lives. What was once three manned shifts has become two shifts with people and one without, with the graveyard workers moving to days or evenings. And while the production levels and part mix rarely allow a full weekend of unattended operation, the shop is now able to pick up additional “free hours” on Saturdays and Sundays, shifts that would have previously required overtime pay.

“Some of our people were tickled to death moving to days,” Staub says. “Now, when the folks on second shift go home at night, they load the tower with material, make sure the system’s controller has all the jobs lined up and leave the machines running. The next morning, we have stacks of laser cut parts ready to move on to the next operation. The automation has been a huge bonus for us.”

The two owners are similarly tickled to death with the additional productivity and its predictability. As Staub points out, it matters not

whether a shop is making nuts and bolts, 3-D printed widgets or computer cabinets – if they can’t rely on their equipment to stay operational and make good parts, it’s impossible to consistently meet customer demands. For this brother and sister team, pride in their company’s quality and delivery ratings (both in the high nineties) is second only to taking care of their employees. And thanks to their investment in Mitsubishi equipment, they can now achieve all three.

When asked about that investment and why he decided to downsize the shop’s available cutting power – moving from 8 kW on the previous fiber laser to 6 kW on the two Mitsubishi fiber machines – Staub’s answer is simple.

“We don’t need it,” he says. “Some manufacturers are offering 20-kW lasers now, and a lot of shops fall into the trap of thinking that more is better. But unless you’re making parts and cutting material that needs all that power, there’s no reason to spend the additional money. That’s why our next Mits fiber laser – which we’re currently working on purchasing – will also be a 6-kW machine.”

Despite his obvious happiness with the Mitsubishi tower and the two fiber lasers, Staub is keenly aware that the industry has a skilled labor problem, one that won’t be solved by automation alone. To address this need, he’s heavily involved with the Ohio Manufacturing Association and the National Association of Manufacturers (NAM), both of which are working hard to get young people involved in manufacturing. He’s also active in a regional program called XtremeSTEM.

“Here, we have high school and middle school students participating in different technical competitions,” Staub says. “They learn to build things like drones and fighting robots or design their own 3-D printed parts. It’s really just a shiny object to get them interested in the

manufacturing industry, but it’s worked out quite well.”

So well, in fact, that over the nine years since he and other community leaders and educators initiated the project, they’ve enjoyed a 60 percent success rate for graduates pursuing a career in engineering or manufacturing.

“This year, we have around 400 students,” he adds. “The various teams get paired up with local manufacturing firms, where they’re able to see what the industry is really like. It’s good for the students as well as the companies, because they’re able to hire these kids right out of high school. And if the student wants to go on to college, most of the manufacturers will help pay for that as part of an apprenticeship program. It’s a win-win for everyone.”