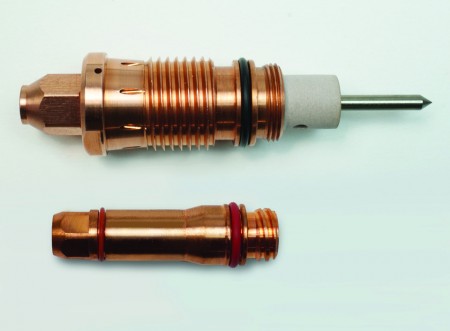 Manufacturers of plasma cutting equipment have made rapid advances in the technology in the past 20 years or so, but it hasn’t been an easy road. The systems of today produce accurate cuts with low distortion and clean edges, but this was the hard-won result of intense technical development and plain hard work.

Trial-and-error methods and repeated equipment adjustments were typical for mechanized plasma cutting in the 1980s. However, even with the system properly adjusted and optimized, the low cutting speeds and heat produced in the plasma cutting process allowed the metal to distort and warp. Also, consumable life was relatively short and the amount of smoke and noise created during the cutting process was high.

The rough-edged quality of parts cut with plasma prior to the 1990s required a lot of rework and preparation before they were usable. Secondary operations included grinding and filing to remove the dross or spatter from parts, reaming holes and machining edges. This increased the cost of every part cut on the older plasma equipment.

Also, the DC output of early plasma cutting system power supplies had voltage fluctuations that caused output current to vary. The results would sometimes lead to a rough cut and short consumable life. And when cutting tables are down for consumable changeout, valuable production time is lost. So the need to increase productivity became the driving force behind the development of better and more efficient plasma cutting systems.

Steps for the better

Developing cooler, longer-lasting electrodes has been an area of much product development and testing with variations in electrode shape and style, electrode materials and cathode materials. Plasma cutting became a viable solution for many more applications when the switch was made during the late 1980s from the tungsten electrode to the modern-style cathode with hafnium electrode insert. Hafnium electrodes can operate with nitrogen, oxygen, air or blends of these gases, while the tungsten electrodes used in the earlier cutting torches needed nitrogen gas. This meant newer plasma cutting systems could cut various metal types by switching to the appropriate gas.

In 1995, American Torch Tip Co., a manufacturer of plasma torches and consumables, secured a patent on a long-life electrode that averaged 200 pierces, almost doubling the previous pierce life. The design includes an electrode retained in a post with an extended exterior surface, promoting superior heat transfer to the coolant and extends electrode life. The design allows for cooler running and less degradation of the electrode material.

The 1990s also brought changes to power supply control systems. Microprocessors were used to control ramping gas pressures and power amperage and this increased the life of plasma consumables and improved part quality, further reducing production costs for manufacturers. Ramping the gas pressure and power amperage smoothly up and down at the beginning and end of cuts greatly improves accuracy and finish. The improvement in power source technologies greatly improved arc characteristics and voltage/amperage controls.

Nesting software has improved the intelligence of the plasma cutting system to know where to send the cutting torch. Critical to a precise cut is the ability to have correct lead-in cut parameters and pierce times and to change speed or output based on where the cut is in the part shape. Corners require less amperage and speed changes and precision holes may require gas pressure and speed changes. These are all capable with today’s software and torch height controllers.

Today’s plasma cutting equipment has also made the machine operator’s job much less complex because the need to tweak manual control settings at the machine is greatly reduced. All of the programming, including nesting, determining the best toolpath, ramping the gas and amperage during different parts of the cut, continually varying the cutting speeds and even decisions about optimum pierce point locations, is done during the pre-cutting programming.

Currently, it is not uncommon to average 1,000 or more pierces per electrode, and occasionally, an electrode can last up to more than 3,000 pierces. This is because modern-day systems can pilot using nitrogen gas (limiting the pilot energy) and then switch to a variety of cutting gases. The most severe electrode deterioration is when the system pilots using a high-voltage charge between the electrode and nozzle and then transfers the plasma arc to the work surface.

And automated torch lifters respond to plate height or warpage by continually adjusting the torch height and amperage, thus maintaining the optimum distance to the work surface. The advancement of software intelligence and torch lifter technology has allowed for cutting patterns that minimize distortion.

The availability of precision plasma consumables, manufactured to precise tolerances, has allowed fabricators to produce steel parts with minimal heat-affected zones. A 1/8-in. cut in steel at speeds over 250 ipm is cool to the touch a few seconds after being cut.

The result of these advancements is high-quality parts and precise holes with minimal unintended bevel and fewer expensive secondary machining and cleanup operations. Benefits also include reduced scrap that results from human error during setup and faster more efficient cutting cycles with less downtime for consumable changeout.

Add to this the ongoing evolution of system computer microprocessors plus advances in computer-aided design and intelligent manufacturing software and ultra-precise, complex cuts and vastly increased productivity for plasma cutting are possible.