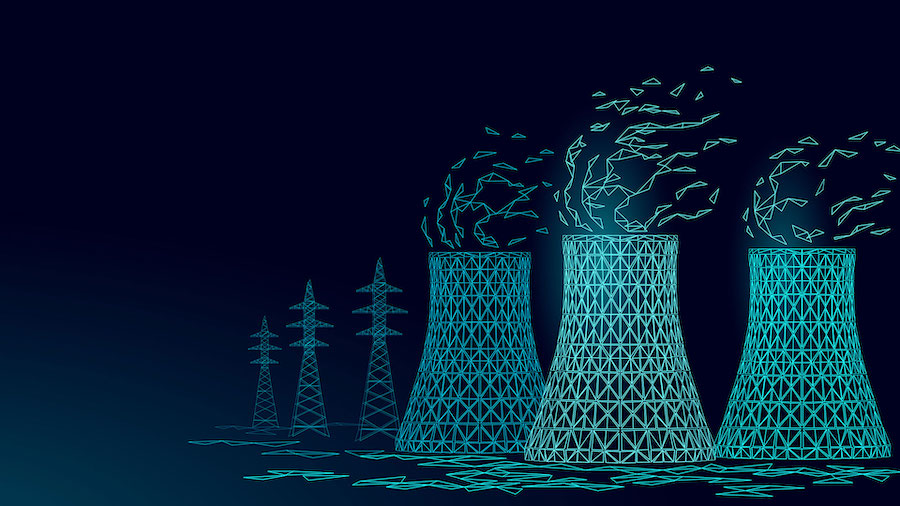 The 2011 Fukushima nuclear power plant disaster in Japan pushed the controversy about nuclear energy production to a new level, leading many countries to abandon plans for

constructing nuclear plants. Some nations took it a step further and shut down their nuclear plants, including Germany, where eight nuclear plants were eliminated in 2011 and operations of the country’s remaining nine were set to expire in 2022. The international reaction to Fukushima caused a pushback on nuclear energy, but if there is a silver lining, existing plants in nearly every country came under safety review and enhancements were made.

Ten years on, discussion on nuclear energy is picking up steam as the levels of greenhouse gasses and resulting climate change renew the call for clean energy. According to World Nuclear Association, an organization that promotes wider understanding of nuclear energy, nuclear power capacity worldwide is once again increasing and 50 nuclear reactors are currently under construction. Interestingly, and perhaps as a reaction to the Fukushima disaster, smaller scale reactors, which proponents say are safer and less expensive than large reactors, are a hot topic.

With new safety guidelines in place, construction of nuclear power plants is under strict scrutiny. Fortunately, there are reputable equipment companies that can help with these safe construction projects. This includes Pemamek, a company that manufactures welding and production automation solutions that are ideal for nuclear power plant construction, particularly the pressure vessels and cores in the plant.

According to the National Oceanic and Atmospheric Administration, CO2 levels are the highest they have been in 800,000 years. High levels of atmospheric CO2, caused in large part by the burning of fossil fuels, has led to climate change. The United Nations issued findings in a report in 2018, saying that if businesses and governments don’t significantly reduce greenhouse gas emissions, the climate change crisis will be pushed over the edge within two decades.

Joonas Arola, director of the power generation segment at Pemamek, began seeing interest in the nuclear energy industry ramp up in the past three to five years.

“In many parts of the world,” Arola begins, “the debate about nuclear energy has started again. Power generation and the resulting CO2 emissions have changed public opinion quite heavily these days. However, in many countries, public opinion is still a bit against nuclear because of the Fukushima accident.”

Pemamek has a history serving the renewable energy market with positioners and robotic welding solutions that are capable of handling massive workpieces like those used in wind towers. Nuclear power manufacturers, which Pemamek has served for almost 20 years, also require the company’s heavy metal assembly and welding solutions, as pressure vessels in nuclear power plants utilize metal that is nearly a foot thick.

With enhanced safety features now a new standard for nuclear power plants, and with the introduction of smaller modular reactors that pose less of a safety risk, Arola says public opinion might begin to sway toward nuclear as a clean source of energy, if not heat.

“If we think about Finland,” says Arola of where Pemamek is headquartered, where he lives and where the average winter temperature is below freezing, “the idea is to use the small

modular reactor to produce heat only, not electricity. The design values compared to large reactors can be much lower when you think about the pressure and temperatures.”

Even though the smaller scale reactors are diminutive compared to the larger plants, the materials used to construct them are anything but small. Welding these large pieces of metal takes an exacting approach, and this is something Pemamek brings to the nuclear power generation market.

“Currently, nuclear energy companies throughout the world are studying and developing manufacturing solutions for these different type of reactors,” Arola says. “Political decisions and public opinion need to change. Those are the main obstacles to wider adopting of modular reactors.”

“The safety systems in the nuclear energy industry have double or triple safety functions for certain operations,” he says, “but in these smaller modular reactors, which operate under lower temperature and pressure, it would be easier to handle those safety functions.”

One of the perks of smaller modular reactors is that they can be constructed closer to the cities they serve, Arola says.

“Big nuclear power plants are quite far away from the end users, and you have to transport the energy,” he says, “and when you are producing electricity in nuclear power, most of the heat goes away in the cooling water. If you have a modular reactor closer to the city, you can also use the heat to warm the city.”

The assembly technology includes a jig unit that precisely positions a section of the vessel, a fit-up unit that securely holds and pushes an unwelded section to the section on the idler unit, and a power unit that turns the sections as they are being welded.

Without the assembly line technology Pemamek offers, the welds are irregular in quality, cranes and additional accessories are needed to join sections, and the multitude of manual handling required can lead to injury risks.

“The main benefit of using our technology is productivity,” Arola says. “When we start to design or think about the solution for the customer, we always think of the productivity part. In parallel, we also consider safety.”

The skills gap, a familiar subject that doesn’t look to improve any time soon, is another issue that is side-stepped with Pemamek’s automated solutions. For example, Arola says the difficult process of cladding, which involves adding a thin layer of corrosion-resistant metal to the thicker base metal, is common in in the energy industry.

It can also be a hazardous situation for a welder, working in a space where a great amount of heat is generated, requiring them to wear protection akin to a spacesuit. With Pemamek’s welding technology, a welder can monitor the cladding process from a safe distance while using Pemamek’s column and boom solution inserted into the vessel, making the weld robotically.

The brains behind the operation is Pemamek’s WeldControl software, automating virtually every process. While programming a robot can sometimes create a bottleneck in production, WeldControl is designed so operators don’t need to spend hours programming.

“If you think about the younger generation that is starting their career,” he says, “it’s much easier to teach them modern manufacturing solutions with easy-to-operate software if they know the basics of the welding. You don’t have to be an expert welder or crawl inside a hot and unwelcoming pressure vessel.”