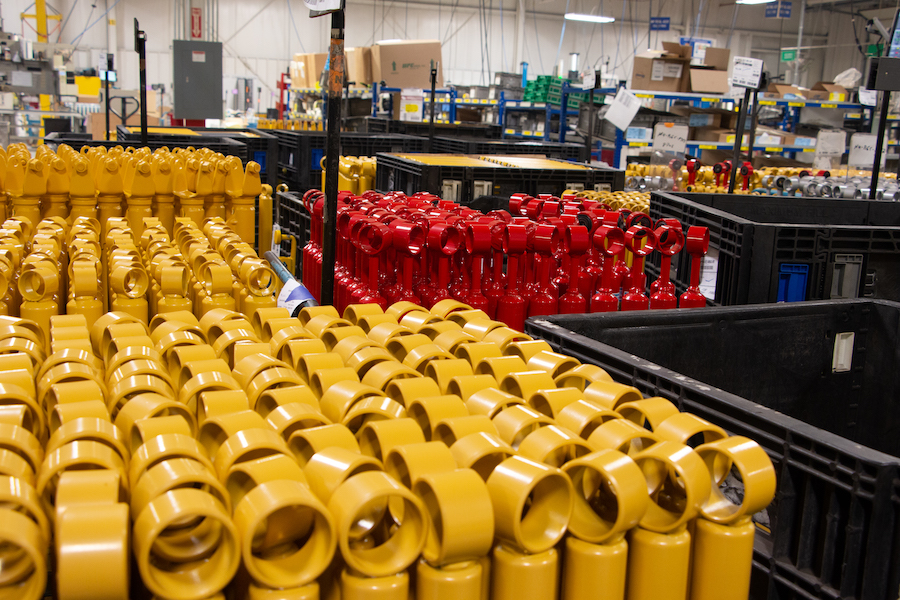 Aldo Albieri, operations manager at Thyssenkrupp Bilstein, doesn’t hesitate to call it a revolution when he describes the fast rollout of Universal Robots’ collaborative robot arms throughout the company’s Hamilton, Ohio, plant that manufactures high-tech suspension solutions for the automotive industry.

“I felt we were in the right time with the right opportunity to be part of it,” he says while thinking about visits the company made to small family-owned machine shops that were automating complex tasks with cobots that otherwise had little or no prior robotics experience. The visits were part of an overall research effort aimed at better understanding the opportunities surrounding cobot implementation.

“We started seeing collaborative robots being used in a completely different way than we traditionally see 6-axis robots running,” he continues. “They didn’t use safety caging, and the cobots were placed on wheels and moved between tasks. That was when things really clicked.”

Albieri, who oversaw the implementation of a new cobot at Bilstein’s Hamilton location every other month for almost two years, has been incredibly pleased with the speed and simplicity of bringing the UR cobots on board.

“It happened at an incredibly fast pace with us evolving rapidly from the trial-and-error phase in the beginning by using vendors to do the machine integration,” Albieri says, “to realizing that in-sourcing the cobot deployments was the way to go.”

Albieri’s Industry 4.0 team, which managed the cobot applications, investigated other options, but concluded that Universal Robots would be the best partner for the project.

“We decided to partner with one type of cobot provider, and that’s when we picked our first cobot with Universal Robots,” he says. “We realized that UR had the most advanced solution for more precise pick and place. The cobots are easy to maintain and program, and it presents the best ratio of speed and repetition.”

To date, Thyssenkrupp Bilstein’s internal Industry 4.0 group has deployed nine UR10 cobots, the largest of the UR models with a 51-in. range and 22-lb. payload. A 10th UR10 is being used as a test model for future applications. 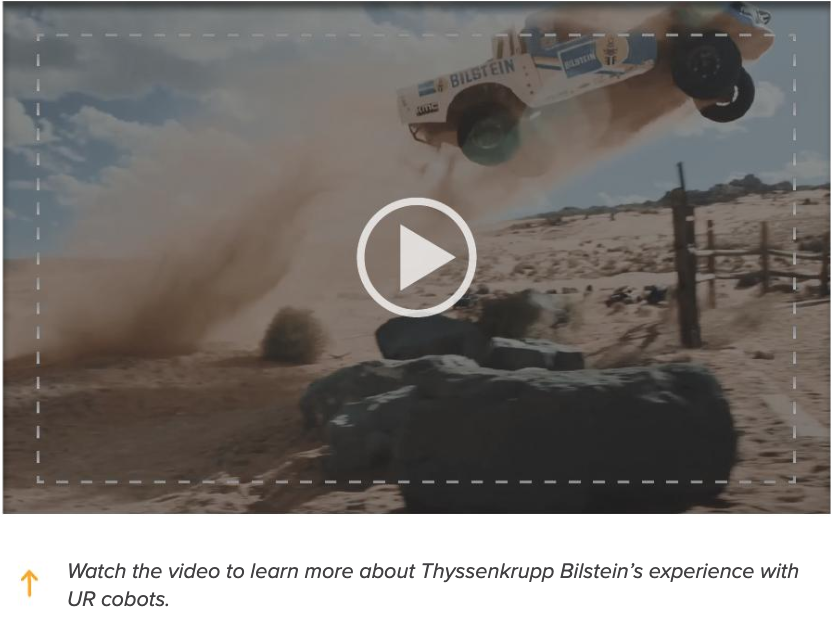 “We are planning to implement about another 40 cobot applications in our organization,” Albieri says, explaining how the company came up with the naming concept for the new cobot colleagues. “We needed a system that could sequentially be applied to 45 to 50 cobots and decided to have some fun with it by naming them after U.S. presidents.”

The cobot fleet now spans from George Washington to John Tyler, but one of the most eye-catching applications at the Hamilton plant features the James Monroe and John Quincy Adams cobots working in tandem assembling Thyssenkrupp’s Active Damping System (ADS) dampers. The multi-step cycle starts by Monroe picking up an inner tube that it feeds to a punch machine and then places on a transfer fixture where Adams picks it up and loads it into a “marriage station” where it grabs an outer tube, marries them together and puts them on the exit chute.

While trying to program the cobots to run in sequence with the machines tended, the engineers made a novel discovery to ease the deployment: They realized they could simply teach the cobots to push the start buttons on the machines instead of hardwiring the cobots into the control system.
Delivering 100 percent
Quality inspection is now automated, as well, where four cobots do gauge inspection and check the post-fill crimp and final parts assembly.

“When we did the gauge inspection before, we would check two parts every one or two hours to make sure we were still where we needed to be, but now we have 100 percent inspection,” says Doug McIe, manufacturing engineer at Thyssenkrupp Bilstein.

The cobot deployed in the final assembly is equipped with a Cognex camera and moves swiftly between inspection points to make sure that all components are in the right position and that the label is applied correctly and is readable. “Every single part is checked, and if it fails, the cobot actually rejects it in the process,” McIe explains.

Since Thyssenkrupp Bilstein started to bring the cobot automation in-house, the ROI on the UR cobots has improved.

“We have projects with both longer and shorter ROIs,” Albieri says. “But, our comfort zone is a payback period of about 10 to 14 months to justify the investment. Cobots definitely deliver a quicker ROI than traditional robots.”

In addition to its current fleet of cobots, Thyssenkrupp Bilstein is now testing two autonomous mobile robots from Mobile Industrial Robots (MiR) to supply material to the lines. The plan is for them to perform the no-value adding handlings between different locations. Overall, freeing up labor to work on other tasks plays a significant role in delivering the fast ROI.

“The UR cobots gave us the opportunity to grow, expand, create more jobs and move our most valuable resources – our human resources – into new projects where their know-how was most needed,” Albieri says, emphasizing that growing the business in today’s labor market without cobots would be difficult. “If we relied only on hiring new people, we would never be able to expand to three times our original size. The cobots have opened a new avenue of growth for us, while being able to retain our existing workforce. No worker will lose their job to a robot.”

While Thyssenkrupp Bilstein still deploys traditional automation for fast-paced cycles in enclosed spaces, the company focuses on having the cobots take over tasks where workers define opportunities. Jordan Osterholt, process engineer in the company’s Industry 4.0 group, explains that involving the operators in pinpointing automation-ripe jobs is key.

“Operators are at the forefront of all the building that goes on in this company,” he says. “Asking them ‘where can we help you to improve the process?’ has been very useful for us when we develop new applications.”

Osterholt, however, stresses the importance of making sure that the first cobots are brought in front of the shop floor team before deployment – an action that he carried out at Thyssenkrupp. As just one example, the cobots were welcomed by operator Quenna Quarles, who used to handle the now-automated tasks.

“I had a lot of aches and pains in the past, constantly having to physically punch that, move this,” she says. “Now we can flow much better production-wise and my job is easier as I just load the tubes and let the cobots take care of the rest.”

According to Albieri, implementing cobots is not just a technology adventure. It can lead to business-wide achievements.

“It’s really about implementing a new organization with transparency and open communication,” Albieri says. “You don’t want employees coming into work one day, realizing they have a robot working next to them. We explained that these cobots were here to expand our business and help remove repetitive ergonomic issues and working conditions that are not the most favorable to people. And that has been the absolutely reality.

“There is not such a big barrier between the people and the technology now,” he continues. “The cobots share the work space with our employees, who can simply grab the intuitive teach pendant and operate the cobots as the interface looks more like an iPad than a robot controller.”

Throughout the entire cobot implementation, an overriding theme dominated conversations: simplicity. Proof of that can be seen in the engineering team developing the cobot applications, which did not have any prior robotics experience.

“We started by doing simple pick-and-place tasks to get the ball rolling,” McIe says. “Next was figuring out the interface with the machines. That was a bit harder, but once we got it done, it spread really quickly and we started seeing applications all over the plant that we could almost copy and paste.”

Osterholt explains how going through the free UR Academy training modules on the UR website was instrumental in the developing phase. “I would do the tour of how to program the cobot and walk straight over to our test cobot and apply what I learned,” he says.

In terms of testing new applications with UR+ software, that, too, proved a fairly simple task. The demo cobot is on wheels so it can easily be rolled up machine-side to test a task.

“We can plug the cobot into a regular 110-V outlet and start testing right away,” McIe explains. “With a traditional industrial robot, we would have to first drill holes and bolt it to the floor. This saves us a lot of time.”

In addition to deploying a test cobot to develop new applications, Thyssenkrupp Bilstein also uses the RoboDK software. It’s certified through the UR+ platform to be plug-and-play with UR cobots.

“The software simulations really help us figure out if our cycle time is going to be accurate enough that it’s worth prototyping the tooling and getting it out there,” McIe says. “We can put the effort in on the computer screen, and when we deliver it, it’s almost ready to go.”
The Industry 4.0 team is now working on inverting two UR10 cobots on a UR+ certified 7th-axis range extender from Vention and is planning to continue the fast-paced rollout, introducing a new cobot on the shop floor every other month.

“There are just so many opportunities out there,” Albieri concludes. “The sky is the limit.”