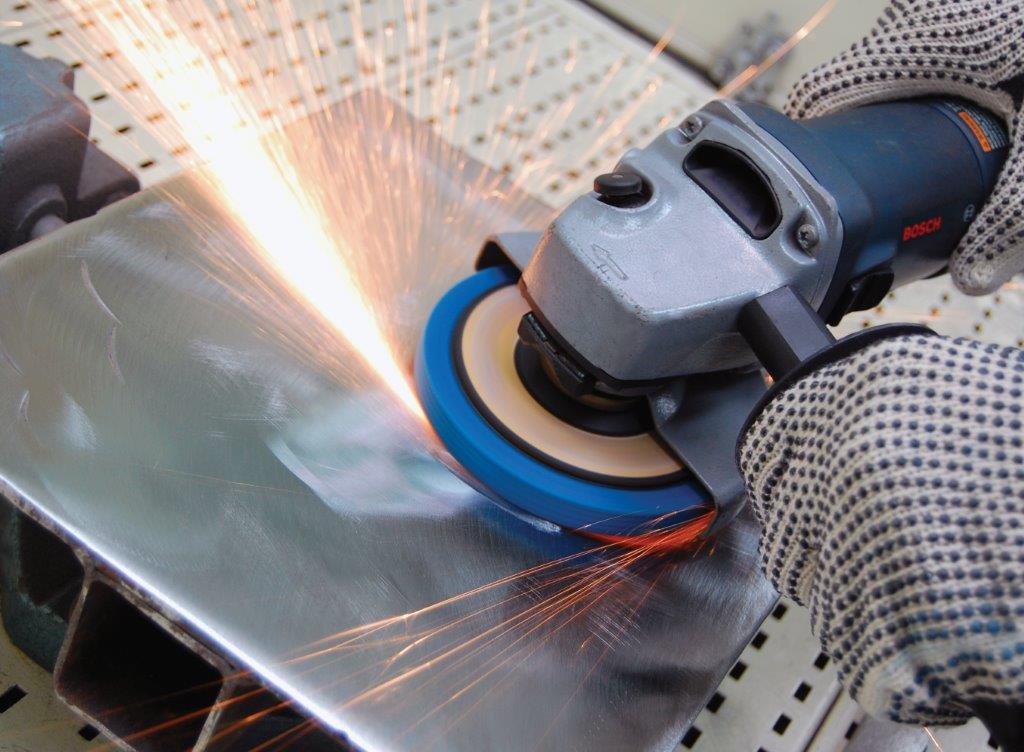 Of all the processes that occur in a job shop – cutting, punching, folding, bending, grinding and more – finishing might be one that doesn’t get as much attention. But that doesn’t lessen its importance, even if it’s a secondary operation. Often, secondary operations can make or break a part.
And it’s for this exact reason that companies like 3M and Norton are always doing research and development in order to further advance the utility of these processes – to find the next big thing in finishing that can help you produce better parts. To that end, both companies have introduced new technologies such as specially developed abrasive grains and resin systems that leverage unique chemistries to offer time-saving properties.

3M
3M’s major attention-grabbing advancement in finishing is their ceramic aluminum-oxide Precision Shaped Grain, which is used in products under their Cubitron II brand.

“It’s a phenomenal leap in technology for grinding,” says Erik Vanstrum, 3M’s technical service manager for their abrasives systems division. “The key is that we’re able to precisely shape the abrasive grain. Instead of a typical abrasive distribution – which [results from taking] big rocks, crushing them and sieving them into the distributional particle shapes and sizes – all the particles are exactly the same.

Vanstrum explains that this is accomplished through controlling how the grain fractures. “It really leads to cooler, much higher cutting rates and longer life.” He also points out that since the Precision Shaped Grain requires less pressure to the work piece, operators don’t have to push as hard when using it. Thus, pushing at the same pressures as you would with a traditional grain leads to getting a job done faster. 3M is working on building out their product portfolio using this grain. “It’s meant for the stock removal side of the business – high cutting, high performing, high value type products.”

In 2009, a fiber disc was launched in one grade using the Precision Shaped Grain. Now, Vanstrum says, 3M has a full line of products including portable bonded cut-off wheels, Type 27 wheels, a new flap disc and a roll lock-type disc, with the most recent introduction being the bonded cut-off wheels and the Type 27 wheels earlier this year. Vanstrum also points out the Precision Shaped Grain is also included in one of the company’s Scotch-Brite products, specifically their Rapid Cut wheels. “It features the highest removal rate that we have in a Scotch-Brite product,” he says. “And it can actually do some leveling. If you have a small weld, you can actually level and finish in one step. “It’s not going to remove huge welds, but if you need to get into corners or anything like that, it’s a really interesting product. It can also be used for really tough deburring applications, and you can deburr parts much faster with it.”
One other new finishing product that 3M has introduced is the company’s Match & Finish flap brushes, intended for stainless steel. Vanstrum says that with these, any operator can blend and finish much better than with a belt. “The traditional way of graining stainless steel would be to use a hard drum on a tool with a belt – basically a belt or an expander wheel of rubber,” he explains. “That’s good for really setting deep grain, but it takes some skill. The brushes are actually much easier to use, and they’re smoother running.”

Norton Saint-Gobain
Asked what is the next big thing in finishing, and Paul Krupa, senior product manager for Norton’s abrasives division, responds that it’s the reduction of time required to complete a particular job. “It’s all about saving time,” he says. “If you save time, you’re saving labor. It’s about quality. Not only do we want to reduce the amount of time that it takes job shops to complete a project, but we also want to deliver a product that, when they’re done, not only are they doing it faster, they’re still generating a high quality product in the end.” To that end, Norton has introduced a proprietary technology called Clean Bond for their abrasives, which is essentially a resin system that guarantees a smear-free finish.

“One of the things that can cause extra time and labor is when a non-woven product smears a work piece with resin,” Krupa explains. “The actual resin that’s used to make the product, when it reaches a certain temperature, can smear and leave a black mark on a work piece that then has to be ground off or finished off with another disk or another belt. Our Clean Bond chemistry eliminates that smearing effect, thereby allowing the operator to continue to work without that adding to the work piece.” Norton plans on expanding the Clean Bond technology to their entire product portfolio, but beyond that, they also have a new abrasive grain technology called Vortex that was introduced in 2013 and continues into this year.

“It’s a patented agglomerated abrasive grain,” Krupa elaborates. “Think of taking multiple small particles, agglomerating them together and forming a larger particle, and then firing that particle to form a much bigger particle. What you get from that effect is that the Vortex grain cuts and penetrates like the large particle that it is, but finishes like the small particle it’s made out of. This means that we end up with a product that can cut much more aggressively and remove much more material faster, but it still generates a fine finish.

“What you’re getting from this combination are products that allow the end user to potentially move away from two or three steps, and instead do finishing operations with one product and in one step – deburr, blend and finish at the same time.” When comparing the Vortex technology to a traditional aluminum-oxide surface conditioning product, Krupa gives an example. “As would be expected, when you use a brand new, traditional aluminum-oxide surface conditioning product, it starts at a very high rate of cut. Let’s say four grams per minute. And then over time, it starts to remove less and less material as the grain wears out or is broken off the surface.

“We performed a test with our best aluminum-oxide product. It lasted about 45 minutes in this test, removing material at about four grams per minute, and then less and less, until it removed nothing after 45 minutes. That same technology, when adding our Clean Bond chemistry and our Vortex grain, starts out at about the same material removal rate – four grams per minute – but it maintains that removal rate for the entire 45 minutes. We actually stopped the test, because it was still removing at four grams per minutes – it just didn’t stop cutting. And at the same time, the RA value of the surface finish was consistent throughout that product’s performance.”

Currently, Norton’s Bear-Tex Convolute Wheels feature both the Clean Bond resin technology and the Vortex agglomerated abrasive grain. As mentioned earlier, the company plans on expanding the Clean Bond resin system to their entire portfolio. In addition, they’re also performing explorations to determine where the Vortex abrasive grain provides the best benefit to their products, and thus expanding it as they see fit. “Our focus is delivering value and delivering high performance products,” says Krupa. “That’s really our mantra as a company. We produce good, better and best products.”

The Norton Vortex agglomerated grain ‘cuts and penetrates like the large particle that it is, but finishes like the small particle it’s made out of,’ says Krupa.