Utilizing short bursts from a high-power laser, European researchers created a nanometric pattern on sheet metal that mimics the surface of a lotus leaf. The roughened surface can repel fluids and create what has been called an antimicrobial, self-cleaning sheet metal.

These metals are expected to find initial uses in food production equipment and home appliances, but, according to project coordinator Luca Romoli, a professor at the University of Parma in Italy, they could eventually find a myriad of uses ranging from medical to industrial applications.

The technique was developed as part of the High Throughput Laser Texturing of Self-Cleaning and Antibacterial Surfaces (TresClean) project coordinated by the University of Parma, with assistance from scientists at universities in Italy, France, Germany, Spain and the United Kingdom.

TresClean researchers used high-power laser cutting devices to create a specifically tailored, rough micro-topography on sheet metal that creates miniature pockets of air, minimizing the contact area between the surface and a liquid.

“In the same way that lotus leaves keep themselves clean, without the need for cleaning products or chemicals, the jagged, rough surface of the metal enables water to stay as spherical droplets by preventing spreading,” Romoli says. “Bacteria do not get a chance to stick because the contact with the metal surface and the liquid is reduced by more than 80 percent. We are looking at an antibacterial metal.”

The lotus effect refers to self-cleaning properties of the lotus leaf. The leaf has high water repellence or superhydrophobicity. Although the plant traditionally grows in muddy waters in Asia, the leaves always appear clean as drops of water bead up and roll off their surfaces taking dirt with them.

Although the water repellency of lotus leaves had long been recognized, it wasn’t until 1971 that botanists Wilhelm Barthlott and Christoph Neinhuis, at the University of Bonn in Germany, examined the leaves’ surfaces using a scanning electron microscope and discovered the presence of convex papillae, or protuberance, on the surface of leaves that are coated with wax crystals measuring from about 10 nm to 100 nm.

These systematically arranged, water-repellent, nano-size wax crystals form natural 3-D structures. Research has gone into replicating these structures for industrial uses, and there has been some success in creating these patterns in plastic.

But, this process is said to be the first successful use in metal. 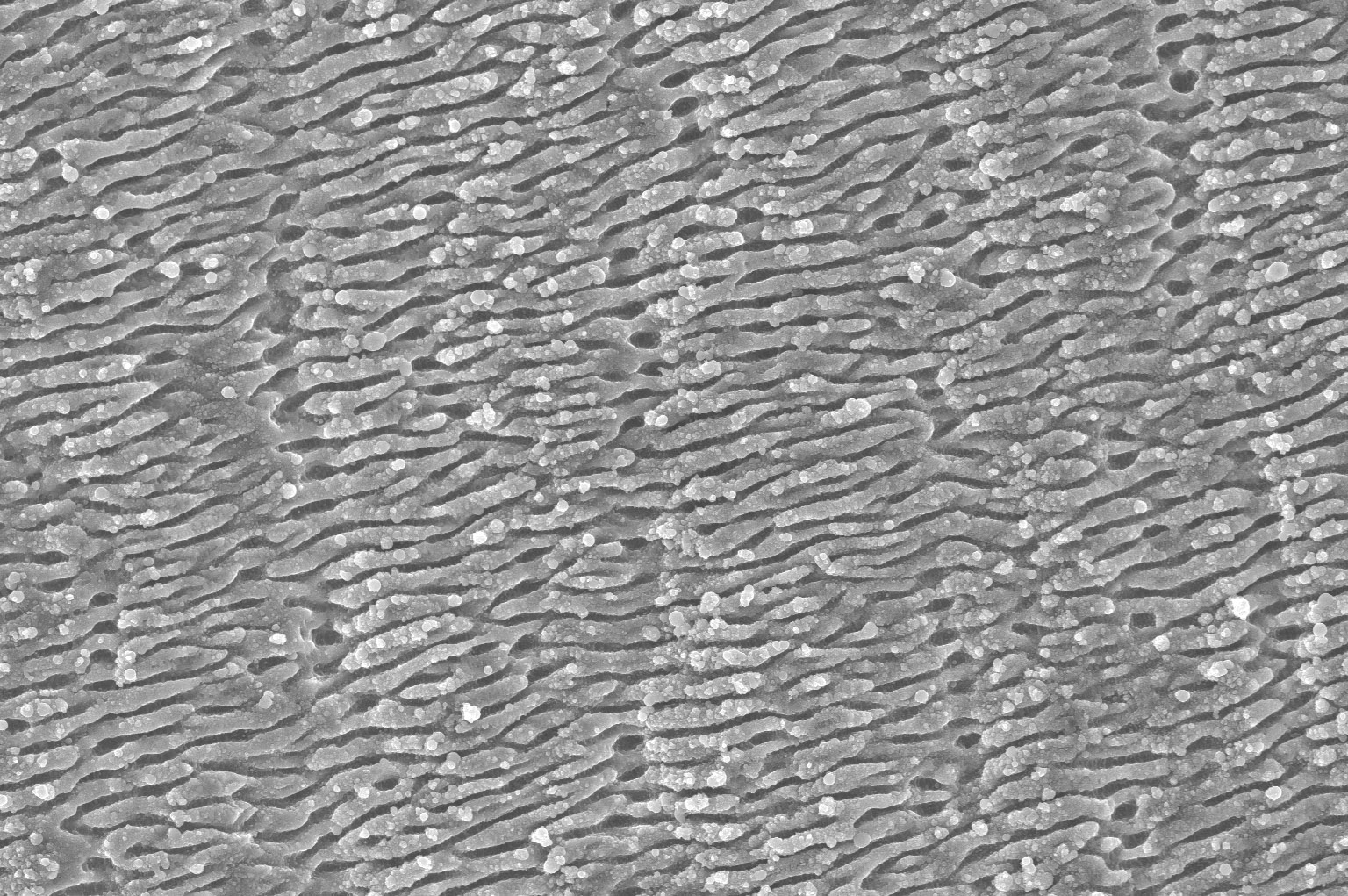 A view from a scanning electron microscope of laser induced, periodic surface structures generated on AISI 316 L stainless steel. The effort is part of the TresClean team’s project to develop water-repellant, antimicrobial steel.

According to Romoli, the metal surface is textured using a high-average power ultrashort pulsed laser in combination with a high-performance scanning head. The unit can move up to 200 m per sec. and can texture an area of 500 sq. cm. in less than 30 min.

The laser textured surfaces will have morphology features with a periodicity in the range of 1 micron to 10 microns filled by what Romoli describes as nano-ripples. Surface structures down to the nanoscale can be obtained by two different laser processing techniques: direct laser interference patterning and laser induced periodic surface structuring.

According to Romoli, the creation of these structures in a one-step process works best by an athermal rearrangement of atoms induced by extremely intense electromagnetic fields from ultrashort pulsed lasers (pulse shorter than 1 ps).

“These features have been studied extensively at a research level to understand and control the creation,” he adds. “However, due to its low productivity, the process has never been developed into an industrial application.”

To date, demonstrations have mainly been realized with lab grade, femtosecond Ti:Sa lasers. TresClean researchers are working to obtain industrially relevant texturation speeds that would require a transition from sources with 1-kHz repetition rate to higher order of magnitudes, Romoli explains.

TresClean researchers are working to upscale the laser texturing process to industrial metal surfaces, which can reach 500 cm2 to 1,000 cm2 and means also combining the ultrashort pulsed laser source with beam delivery systems of new generations. With a tailored designed scanning head, Romoli says the goal is to reach beam speeds up to hundreds of a meter per second to cover large industrial surfaces.

Research is ongoing in regard to the various patterns that can be created. Differences in the nanometric topographies on the metal surfaces alter a number of physical properties and, therefore, can be used for a specific surface function.

“Designing a dedicated roughness with a laser requires us to know the boundary conditions in which the surface has to work: type of fluid, dimensions of particles and bacteria, temperature, chemicals, and so on,” he says. “Starting from this knowledge, the micro-roughness can be obtained taking into account the aspect ratio of depth and width of the valleys and crests.” 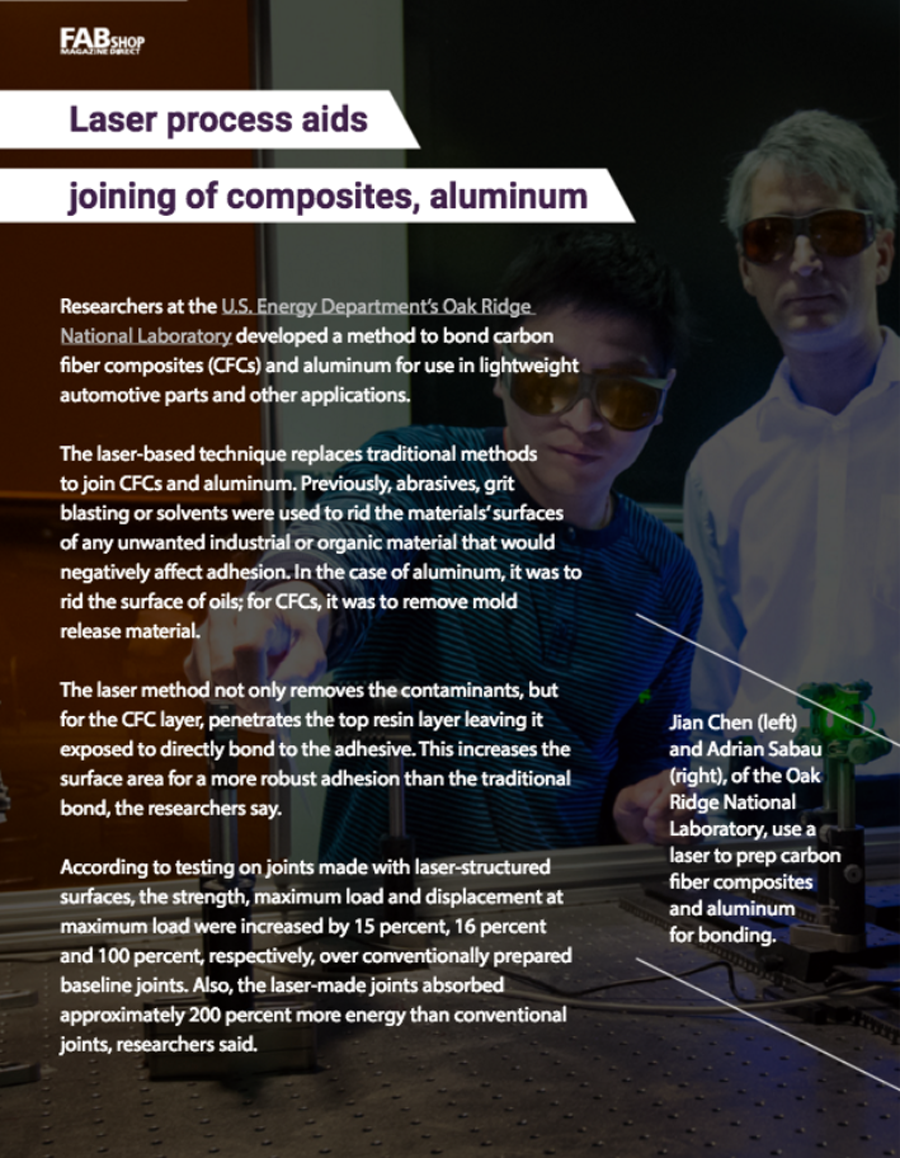 The use of surface roughness as a control parameter to govern the wettability of a surface has found limited industrial use. However, as research continues, Romoli estimates that the TresClean team could have its products ready within two years.

One specific area of interest is to create antibacterial metal surfaces for use in the food production industry, an advance that Romoli says should increase productivity and reduce costs in factories that process biological food products. 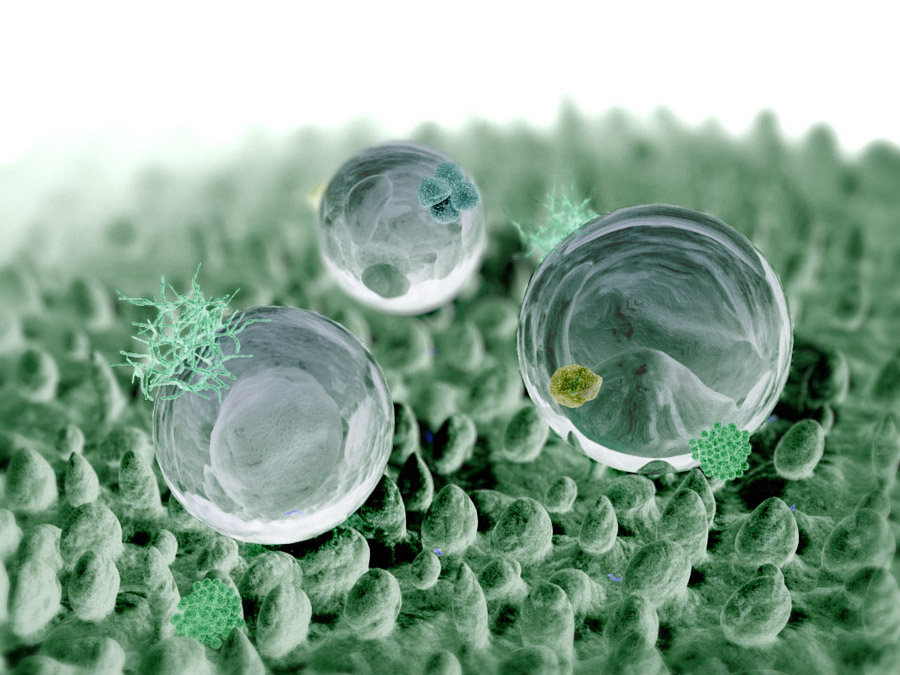 A water bead rests on nano-size wax crystals on the surface of a lotus leaf. Raindrops roll across these naturally occurring, 3-D structures removing dirt as they travel.

“Vats in milk factories need to be cleaned every 6 to 8 hours to avoid the exponential growth of bacteria,” he says. “This hinders usage and, therefore, affects output. Saving hours per day in cleaning will yield an efficiency improvement stemming from fewer sterilization cycles and less cleaning time within production as a whole. This will also reduce energy consumption as a result of fewer cleaning phases, making food production quicker, safer and more profitable.”

This could just be the beginning. Any use of metal that needs to avoid the formation of bacteria could potentially benefit from the TresClean product, such as medical cutting tools, sterile surfaces, dishwashers or even saucepans.