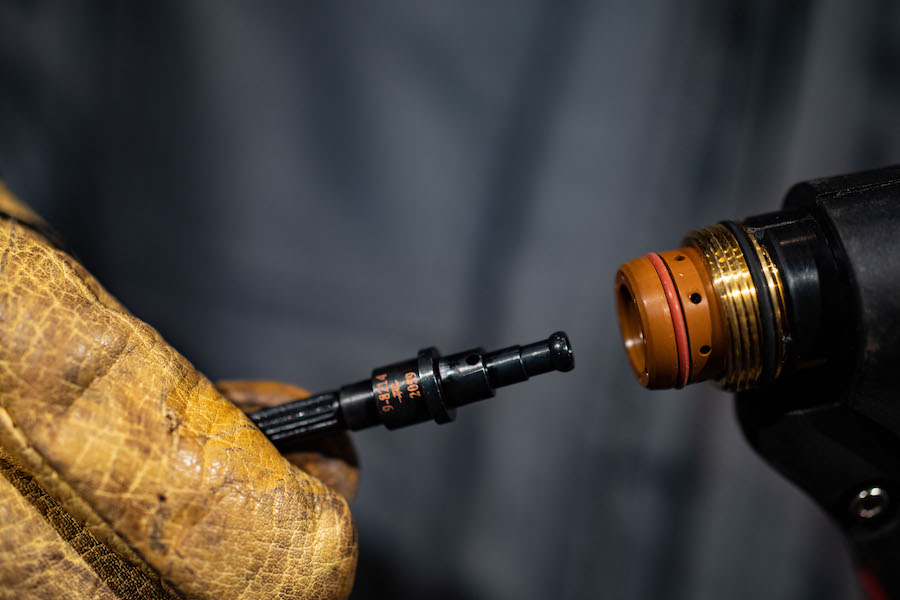 Historically, inspection of the longitudinal, or long, seam welds in pipes using phased array ultrasonic testing (PAUT) has been challenging because of the pipe’s thin wall thicknesses, vertical weld bevel orientations and the curvature of the pipe itself. The ultrasonic beam orientation is along the pipe curvature, which greatly affects the acoustic focusing capabilities and reduces the probability of detection and the ability to correctly characterize a flaw.

Recently, however, a new long seam weld scanner, the Olympus AxSeam, was introduced. The new scanner facilitates the mechanical setup and scanning action for long seam weld inspection. The objectives of the AxSeam scanner and the OmniScan X3 flaw detector’s software tools are to simplify the mechanical setup and scanning process and increase flaw detectability and characterization through better scan planning and imaging.

In regard to the mechanics, positioning the probe at the desired distance from the weld centerline as well as applying a constant and minimum pressure on the probe is a little more intricate for long seam weld inspection than for girth weld inspection. In the latter case, numerous manual and semiautomated scanners exist. These scanners are typically simple to use, in part because the wheels and the probe configurations are not affected by the pipe radius. This differs from a long seam weld scanner’s configuration in which the wheels and bottom face of the wedges are positioned along a curved surface.

Inspecting pipes in the longitudinal direction can be more challenging than circumferential scanning as a variation in pipe diameter has a greater impact on how the scanner and probes fit on the pipe surface. This has been addressed in the design of some older scanners by adding several complex adjustments at the expense of simplicity. Olympus developed the AxSeam scanner with a focus on easing the setup by minimizing the adjustments required when changing pipe diameters, probe separation or scan orientation.

The AxSeam scanner includes new features that enable one operator to perform the scan without needing to directly manipulate or monitor the acquisition instrument. It can quickly and easily be set up on a wide range of pipe diameters: Longitudinal welds that are 152.4 mm (6 in.) OD up to flat and circumferential welds that are 254 mm (10 in.) OD and up with four probes and 114.3 mm (4.5 in.) OD with two probes.

The main feature of the AxSeam scanner is the four probe holders that accommodate phased array and time-of-flight diffraction probes to execute a multi-technology inspection, including the total focusing method (TFM).

Other features include patented dome-shaped wheels that adapt to pipes without adjustment between changes in diameter, magnetic wheels and a brake system that help maintain the scanner’s position on the pipe, intuitive tool-free adjustment mechanisms and controls, and a convenient cable management sleeve.

The AxSeam scanner’s ScanDeck module provides important information to the operator directly on the scanner and enables remote operation of the instrument. The module contains two buttons – one that can “zero” the encoder and start the acquisition on any OmniScan unit and another that activates the laser guide.

One LED indicator is linked to the OmniScan X3 unit’s phased array channels and alerts to a loss of coupling, and another set of LEDs indicates when the scanner speed has exceeded the maximum scan velocity to help prevent missed data. This feature is particularly useful for TFM inspection, which can require a lower acquisition rate. The module also integrates a laser that the operator can use to remain aligned with the weld or a mark identifying the position of the weld in cases where the weld bevel is not visible.

Scan planning is a crucial part of any ultrasonic inspection. Without an adequate scan plan, flaws can be misinterpreted or, even worse, missed. The OmniScan X3 flaw detector offers simple tools for long seam weld scan planning for conventional phased array and for TFM inspection. This section presents some scan planning guidelines and tools the operator can use to create an optimized setup.

Two main criteria are used to build a good acoustic scan plan for long seam weld inspection: weld coverage and sensitivity to the flaw. The former is relatively simple to determine from the ray tracing, even if using only the first and last ray of the sectorial, or linear, scan. The operator only needs to make sure that the weld and the heat-affected zone are positioned within the displayed ray-tracing zone.

The latter criterion (sensitivity to the flaw) depends not only on the acoustic setup but also on the characteristics of the flaw itself. For example, a setup optimized for a volumetric flaw, such as inclusion, might not be well-suited for a vertical flaw, such as an internal crack.

To increase the probability of detection, the acoustic ray incidence angle on the flaws must be as perpendicular as possible to the flaw orientation. However, for long seam weld inspection, the flaws are typically orientated vertically (i.e., in the radial direction, from the center of the pipe).

In the case of a long seam weld, the pipe’s radius of curvature plays a role in the ray incidence to the weld. While vertical flaws in a plate are usually hard to detect using pulse-echo PAUT, these same flaws in a small-radius pipe can be detected. However, a broad range of pipe diameters exists, and each diameter must be treated differently. It is quite possible that for mid-range diameters – for example, a 20-in. pipe – pulse-echo mode might not be well-suited for vertical flaw detection.

Other acoustic imaging paths, such as self-tandem modes where the transmitter and receiver path are different, can be used to increase probability of detection. This type of acoustic mode is already used for J-bevel circumferential weld inspection1 using conventional PAUT, but this technique yields only a single A-scan.

The TFM, however, enables imaging of numerous self-tandem acoustic modes. This inspection method could, therefore, increase the probability of detection for long seam weld inspection.

The TFM has some advantages over conventional PAUT for long seam weld inspection. First, the TFM region of interest (i.e., the TFM grid) can be made true to geometry. In the OmniScan X3 flaw detector, the TFM grid conforms to the pipe curvature, providing easier-to-interpret imaging. Another advantage is the acoustic focusing. While various focusing schemes exist for PAUT, TFM imaging is focused everywhere in the region of interest, eliminating the need to configure this parameter for the operator.

Another advantage of the TFM is the availability of new imaging paths, such as self-tandem propagation modes, that can be used to increase the probability of vertical flaw detection. The disadvantage of TFM imaging resides in the lower acquisition rate and the fact that there are multiple images – each one associated to a different acoustic path – that need to be analyzed separately.

For scan planning, the same considerations described for conventional PAUT apply to the TFM. The acoustic beam visualization is, however, more complex because each pixel of the TFM grid is built from a summation of numerous elementary beams. The OmniScan X3 flaw detector offers a novel TFM acoustic modeling tool for scan planning. The Acoustic Influence Map provides users with sensitivity maps computed using the probe, wedge, part and flaw parameters.

Long seam weld inspection is a challenge because of the curved interfaces in the pipes and types of flaw to be detected. From a mechanical perspective, the introduction of the AxSeam scanner facilitates this application, offering easier setup preparation and a more reliable inspection thanks to built-in indicators that provide coupling status and velocity monitoring. The scanner is also versatile enough to be used for a wide range of pipe diameters, both for long seam and girth weld inspection.

In addition, owing to the OmniScan X3 flaw detector’s scan planning features, such as the Acoustic Influence Map for TFM imaging and various analysis features, including the corrected skip overlay, long seam weld inspection has been rendered much simpler. Demonstrated through experimental results, various flaws can be detected and characterized more easily with the help of true-to-geometry imaging provided by the TFM.