Considered the workhorse of the steel fabricating industry, an ironworker can be an essential machine in a metal fabrication shop. The main advantage of an ironworker is versatility. It is a compact, multi-functional machine that can punch and shear and is typically available with more stations for other operations. 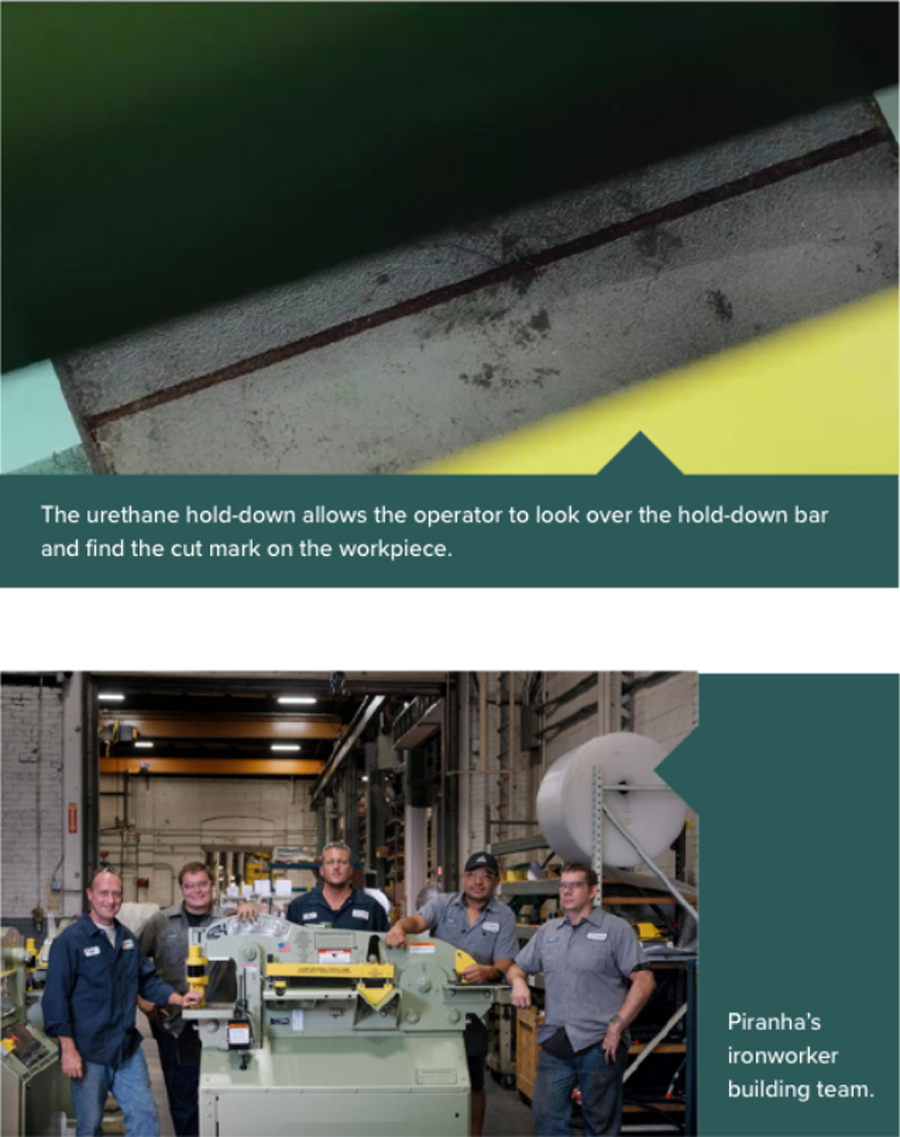 “Fabricators use an ironworker to prepare parts for welding onto a bigger structure or for producing finished individual parts,” says Scott Donahy, Piranha product manager. “Typically, it’s a clean enough cut that the part can go straight to the welding operation. The ironworker is taking the place of a grinder, saw or drill. A lot of grinding that welders do to remove fillet out of the angle iron, for example, can be done much more quickly on an ironworker.”

The factors that affect an ironworker so it can provide those clean cuts and perform optimally include the workholding, blade condition, blade gap, available tonnage and blade angle.

Workpieces must be set up properly or it can result in parts with burrs or distortion. Piranha ironworkers have automatic urethane hold-downs for shearing so the operator doesn’t have to adjust the hold-down manually every time the material thickness changes.

For punching, a urethane stripper secures the material against the die as the punch operates.

“Whether you’re punching a hole or stripping the punch out of the material prior to releasing it, it provides a nice quality punched part,” Donahy says. “The urethane stripper clamps material to the die block just around the area that you’re punching a hole. It is not holding down the whole workpiece, just a localized area, but it does not allow the workpiece to move.”

The urethane hold-down also gives the operator a great line of sight over the hold-down bar. 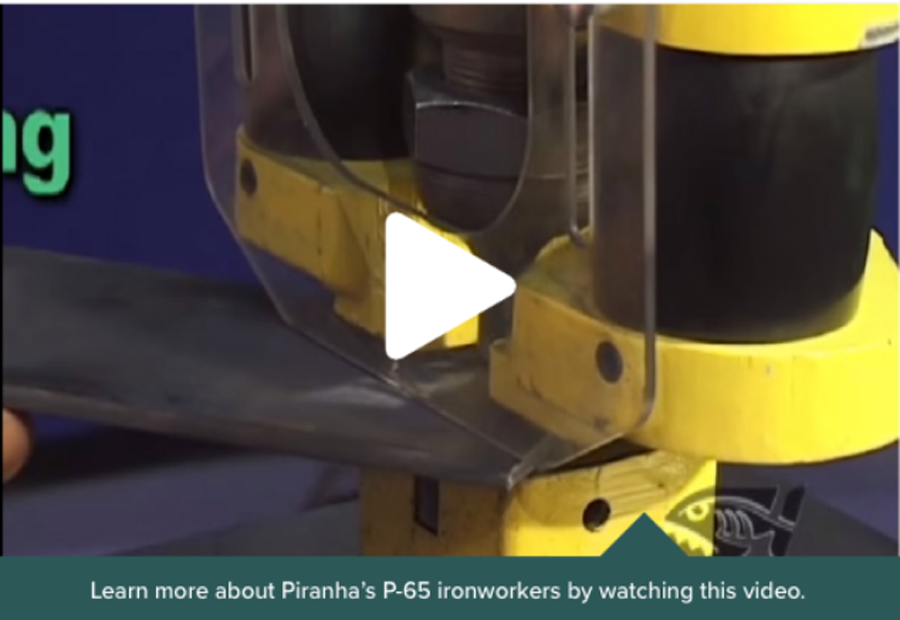 “Often times, the operator can’t see the cut lines or layout markings on other types of ironworkers,” Donahy says. “This hold-down allows them to insert the workpiece into the machine and look over the hold-down bar, find their mark and make a cut quickly without having to measure anything.”

Dull blades can produce burrs or distortion on parts. The same goes for a dull punch.

“Blades do dull over time, especially when cutting harder material,” Donahy says. “With shearing, you will notice the edge of the material start rolling over or becoming a little rounded to where it is not providing as good of quality. This is a good indicator that you really need to check your blade. You will probably notice it more when shearing thinner materials.”

Many blades, including Piranha’s, have more than one side; some blades have as many as four. So if an operator notices a dull edge, he can rotate or flip the blade to utilize all four edges before needing to replace it. 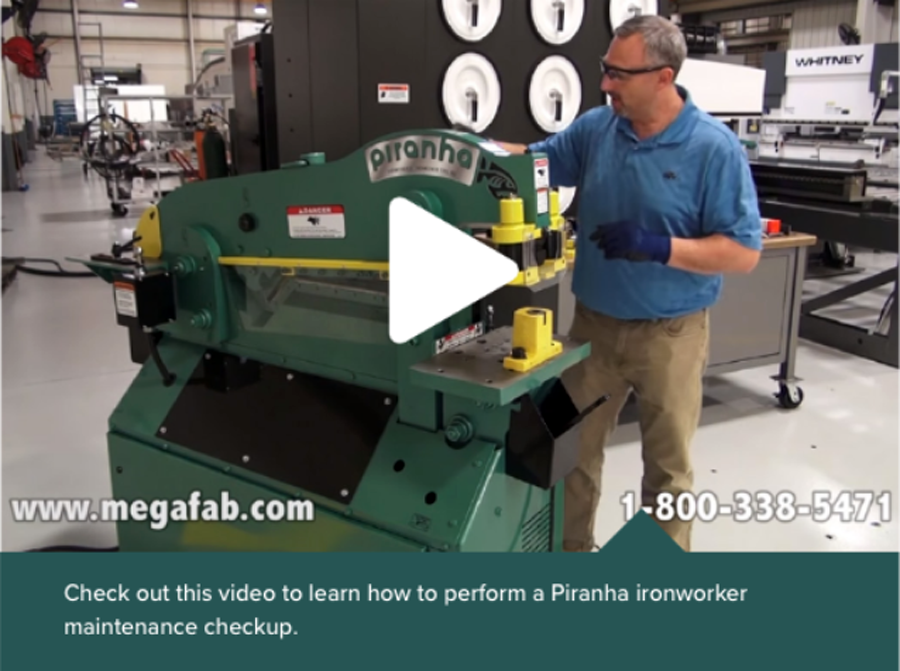 Blade gap, the space between the upper and lower blade at the end of the stroke, can create significant burrs. This is especially true with mild steels and other soft metals.

To solve these issues, Piranha uses a factory-set, or fixed, blade gap that can handle the entire ironworker’s capacity rating. Piranha’s blade gap typically measures between 0.007 in. and 0.010 in.

“For blade gap, we don’t use any shimming,” Donahy notes. “The blades come directly in contact with the beam without shimming. A lot of ironworkers don’t have a precision machined frame so they take up the tolerances just by using shims or push bolts behind the blades to set how close they are together.”

Similarly, at the punching station, a burr can occur in the hole if the clearance between the punch and die is too large.

The industry standard is to rate an ironworker based on its punching tonnage. The rating determines the maximum hole diameter that can be punched through the maximum material thickness.

The combination of shearing tonnage and blade approach determines the maximum size and thickness of the profile that can be sheared. Pirhana has the ability to reduce the rake angle because of the extreme leverage in the shearing section.

When shearing, the rake angle has a significant effect on part quality. A light-duty ironworker may provide the same capacity in the shearing station as a heavy-duty one, but it moves the rake angle. It is cutting a small portion of the material at a time to achieve that same capacity, but the section being sheared off has a lot of curl to it.

A high rake angle concentrates all cutting force at one point, instead of across the length of the cutting edge. Therefore, less force is required to cut the material.

For Piranha, however, a low rake angle is the optimum design for shearing.

“With a low rake angle, you are cutting a large section of that material all at once so that dropped piece remains flat, even if it is a small piece, say 1/8 in. to 1/4 in,” Donahy says. “It requires a lot more force to do this, but the cut quality is greatly improved.”

Donahy notes that when he talks to welders in the industry, the ironworker is typically “one tool welders would love to have in their shop because it can take the place of so many other operations.”

One specific feature welders appreciate is the notcher on the back end.

“The ability to take a piece of angle iron and be able to notch a leg out to the angle and make a nice smooth cut that runs down and removes the entire fillet is very handy,” he adds.

Another feature Donahy says welders find useful is that the punch is mounted with a dovetail slide system. The operator can quickly remove the punch and put the bending attachment on in less than 1 min.

“Other ironworkers have this bending feature, but it takes about 15 min. to change over,” he explains. “And, more than likely, an operator is not going to bother.” 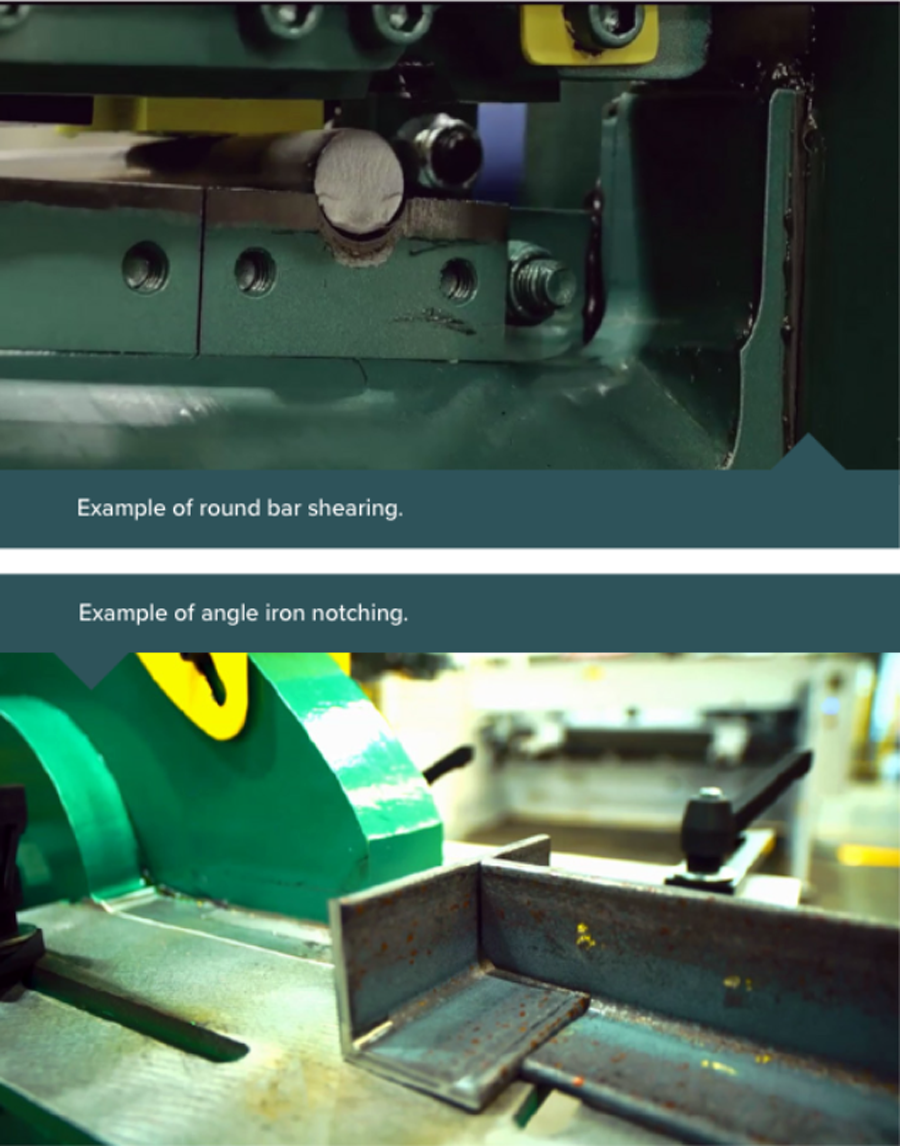