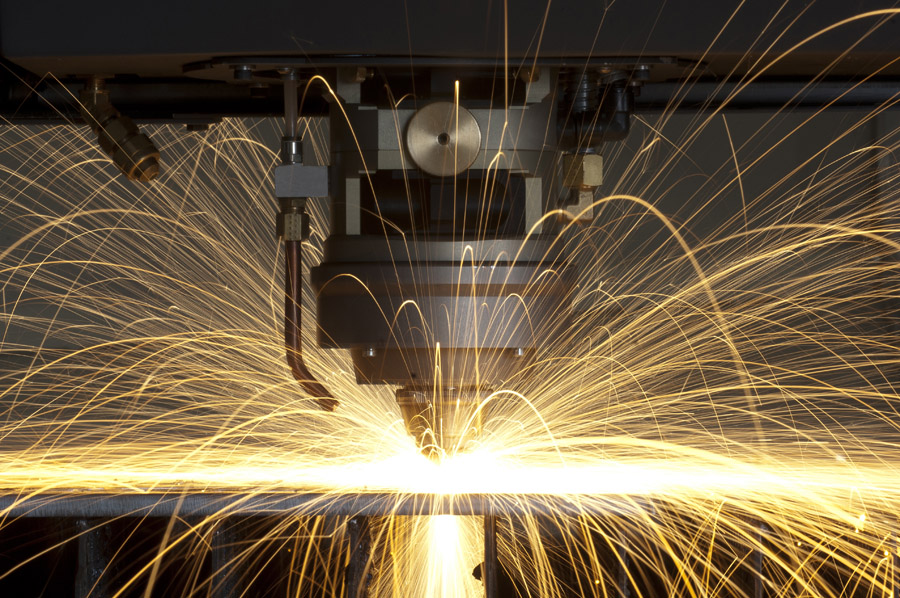 If fab shops were families, a CO2 laser would be like the Mom. She’s fairly efficient and very dependable, but admittedly a little high-maintenance, needing regular TLC to keep going. Still, she cranks out a lot of work, way more than the other family members will ever appreciate.

And even though we wouldn’t know what to do without her, she’s a little expensive to keep around. Dad will tell you her monthly expenses eat up a sizeable portion of the family budget. But, she continues to take on whatever demands come her way, just as she’s done for the past few decades.

Sadly for CO2, there’s a new sister on the laser cutting block. This girl works for peanuts and outperforms the old reliable by a good amount – on an average day, she can perform three to four times as much work. In fact, she’s so fast and agreeable to be around that some in the family think it’s time to send our tired CO2 mother packing. Sorry, Mom. 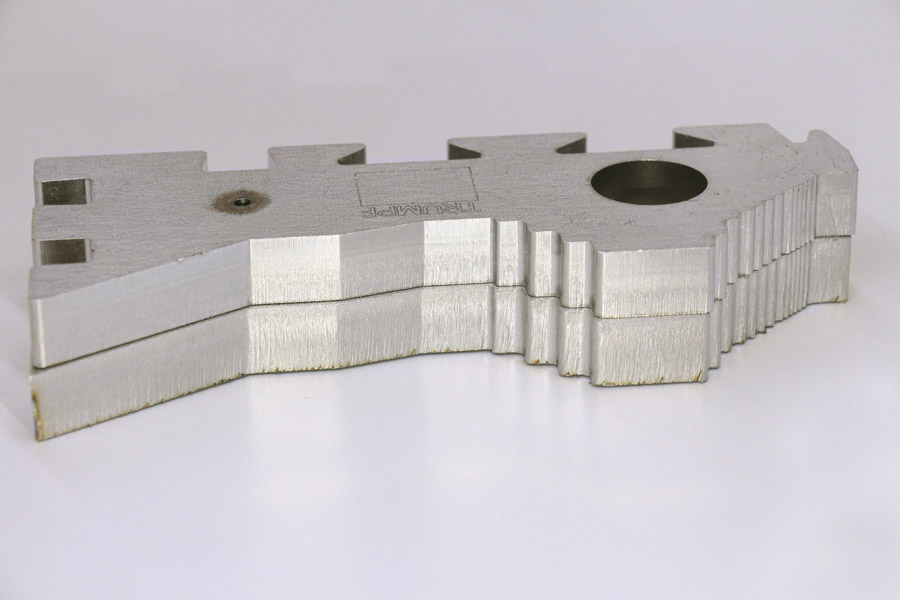 Edge quality is important: The 1/2-in.-thick workpiece at top was cut on a CO2 laser. The bottom one was cut on a solid-state laser using Trumpf’s BrightLine fiber technology.

What’s the new girl’s name? You’ve probably already heard of her. This sheet metal cutting dynamo is called fiber laser, and she’s taken a lot of us by surprise. Introduced less than a decade ago, fiber lasers (some refer to them as solid state) have moved up the ladder of laser popularity like a firefighter in a burning building, and they now account for the majority of laser cutter sales throughout North America.

“If you’d asked me about the future of CO2 in 2013, my answer would have been much different than it is today,” says Stefan Colle, laser products manager at LVD Strippit. “To many of my coworkers and also myself, this shift in favor of fiber has taken us a little bit by surprise. When first introduced to the technology, I wasn’t sure if it really had a chance to compete, but I now have to acknowledge that CO2 is, indeed, going to die – eventually.”

When will that be? Colle indicates that it may be sooner rather than later, due largely to the fact that fiber’s chief limitation – material thickness – has evaporated like a puff of noble gas. 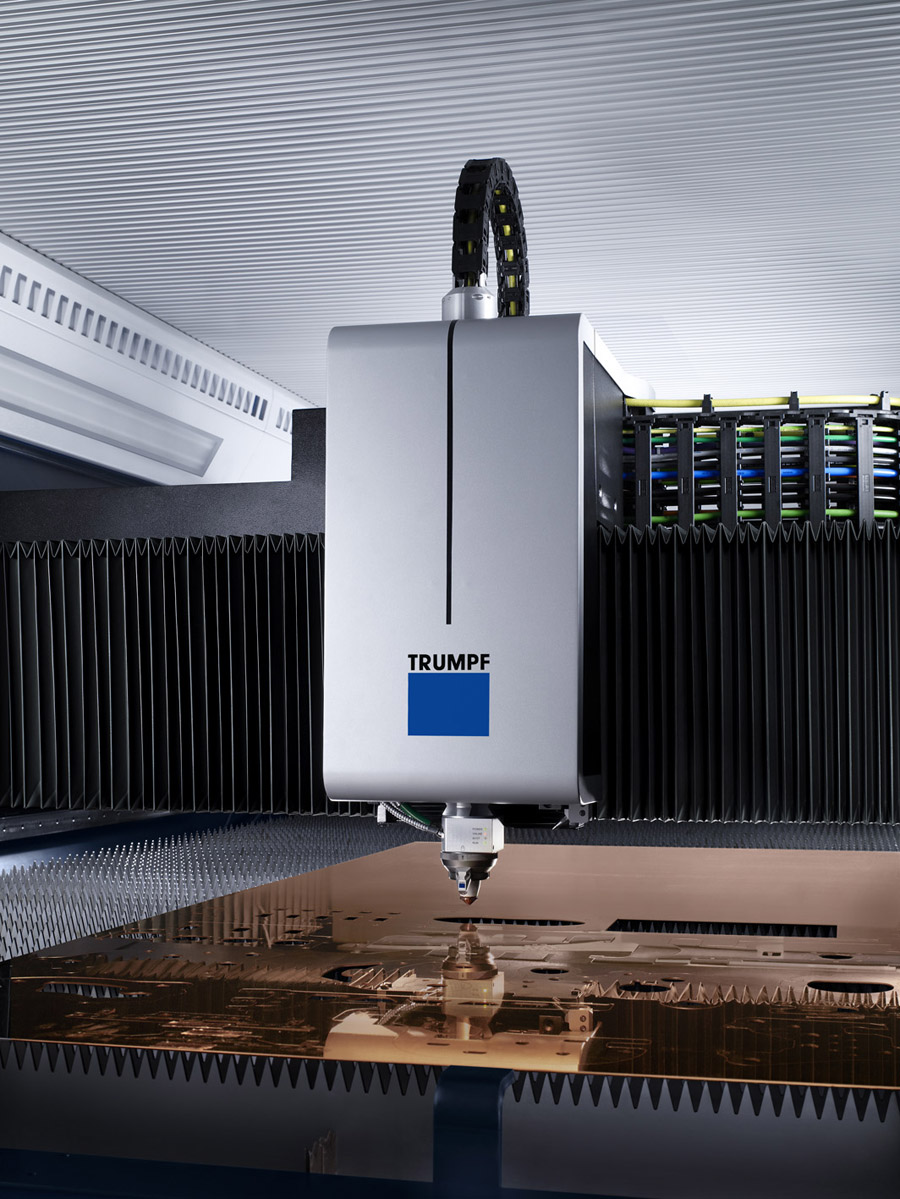 “The first fiber lasers didn’t have the focal length required to process thicker plate, an area that CO2 has historically dominated,” he says. “So, the operator ended up basically doing surgery on the cutting head whenever the material thickness changed substantially, which was not an easy thing to do.”

The technology on fiber cutting heads has improved drastically since then, he continues. “Not only can we adjust the focal point up and down, but we can also make the focal spot wider or smaller, which in turn affects kerf width. When you want to process thicker material and need greater width to evacuate melted material or to adjust the kerf width down for thinner gauge materials, it’s now very easy to do. Because of this, there’s virtually nothing you can do with a CO2 laser that can’t be done faster or just as quickly on a fiber machine.”

Along with cutting speeds several times those of CO2 in light-gauge material, fiber is also the king of piercing. Colle says there’s no worry over a fountain of molten material flying out of the hole and splattering about, sticking to or damaging the nozzle and workpiece; from a piercing perspective, fiber lasers are the bomb.

“I worked with a customer recently that was punching 1,000 holes in a series of steel plates,” Colle notes. “They were saving around 15 sec. per hole over their old CO2 laser. Do the math and you’ll understand the significance of fiber lasers.” 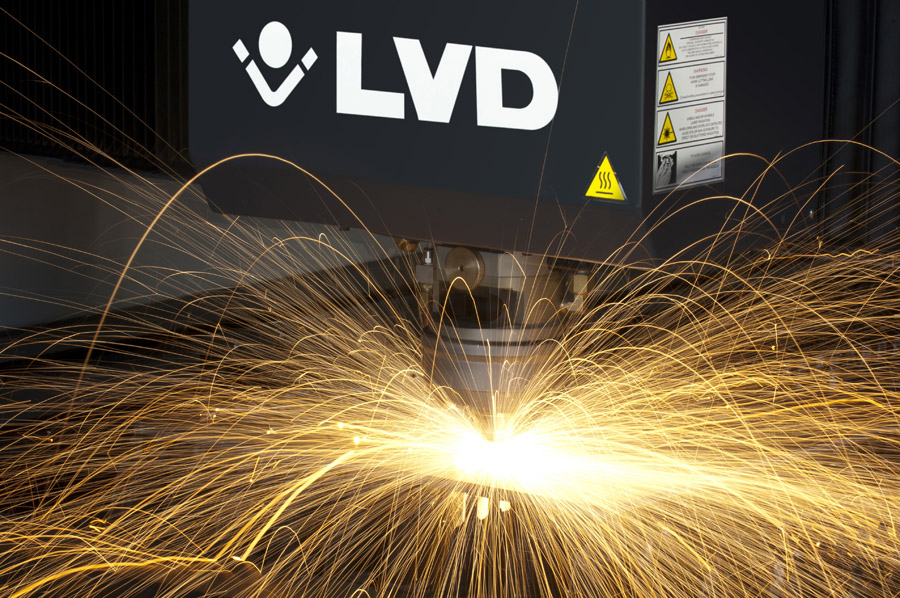 Compared to CO2, fiber lasers shine at piercing, quickly blasting through materials with no risk of molten blowback.

Still, CO2 lasers shouldn’t be discounted quite yet. Colle notes that CO2 remains a leader in some industries, most notably those cutting plastics and wood, and some laser experts suggest that CO2 produces slightly better edge quality in heavy-gauge stainless steel (although that situation is almost certainly changing as new power sources come online and as fiber laser producers tweak their systems accordingly). And for those in the market for an affordable used machine, there’s plenty of inventory as shops sell their old CO2 lasers in favor of fiber.

Some of the industries where CO2 lasers still have a bright future include sign-making, engraving and part marking. Kern Laser Systems Inc., for example, produces a variety of large-format laser cutting and engraving systems. Its largest is a gantry-style machine boasting 80-in.-by-120-in. travels and etching speeds up to 150 in. per sec. Additionally, it’s well-suited for acrylic, light-gauge metal, wood, foam and even stone. The company also offers its Micro line – the smallest with a working area just 24 in. square – as well as its Z12, designed for stone monument etching (what do you want on your tombstone?).

Because these machines are not intended for high-volume production of cutting sheet metal parts, the laser power is low – Kern’s most powerful machine is 400 W, one-tenth that of a typical high-power fiber laser. Yet they sport some of the same features as their industrial-grade cousins, including closed-loop chilling of the laser head, vacuum systems to remove smoke and fumes, and the ability to use high-pressure oxygen or nitrogen assist gas. 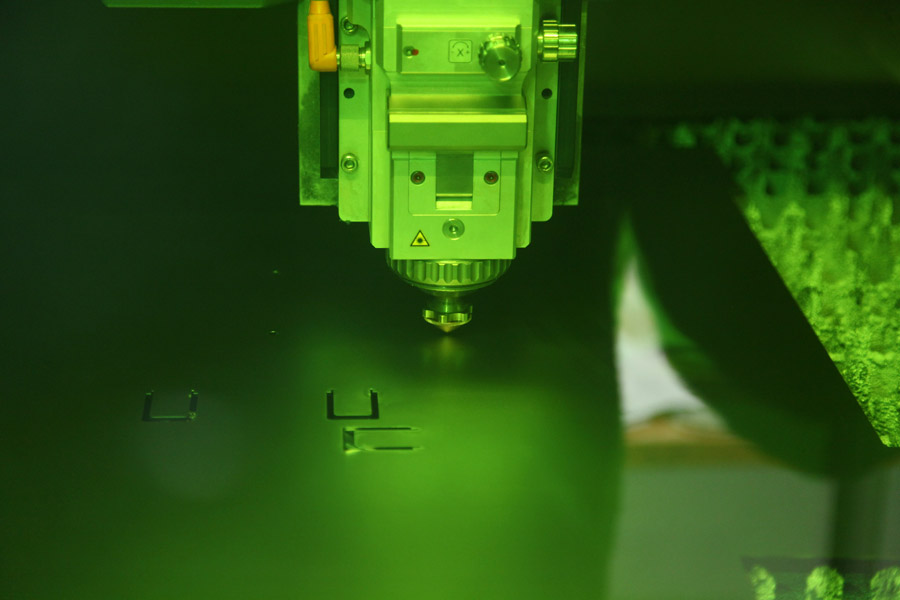 Keep your eyes and skin protected. Fiber lasers use a short wavelength that is potentially damaging to humans.

Brett Thompson, sales engineer at Trumpf Inc., agrees that fiber technology will continue its exponential growth. “In our machine tool division, sales have continually trended toward solid state to the point that it’s now almost the exclusive technology,” he says. “In the U.S. market, it’s been that way for some time, but we’re starting to see the rest of the world moving in the same direction.”

Thompson points out that CO2 continues to play an important role in other Trumpf divisions, most notably for laser welding of drivetrains and other heavy components where it does a better job than fiber at the deep penetration necessary for strong welds.

He attributes fiber’s success – at least at Trumpf – to the company’s BrightLine fiber technology. “We’re able to massively change the beam diameter right in the middle of the waist where the focus occurs. This provides excellent edge quality while maintaining a very stable process, allowing us to remove material very efficiently.”

As with the other companies interviewed for this article, Trumpf is, therefore, able to effectively process the de facto standard of laser cutting, 1-in.-thick steel, at speeds comparable to CO2 and, in some cases, far higher. But there’s more to laser operation than how quickly one can plow through a chunk of carbon steel or zip around some thin-gauge aluminum. There’s also laser life and maintenance to consider.

“That’s one of the key benefits of this technology,” he says. “Compared to CO2 lasers, solid state, which in our case is called a disk laser, is ideally suited for an industrial environment. They’re just incredibly robust. There’s none of the photo darkening that CO2 laser owners are accustomed to and which causes a continuous loss of laser power over time. The disk laser you buy today will produce the same amount of power, plus or minus the guaranteed one percent, 10 years from now.”

Most also agree that the amount of maintenance during that decade will be negligible. Rather than “a bunch of mirrors and optics” to keep clean and aligned, a fiber laser has far fewer components, resulting in no power drop as the beam bounces through the delivery system. The end result is operating costs roughly one-half that of CO2 lasers.

“The ownership experience that comes with fiber is phenomenal,” Thompson says. “You’re not tossing money at system maintenance, and you no longer have to adjust cutting parameters to compensate for continuous loss of power.”

Not everyone has been surprised about fiber’s success. Salvagnini America Inc.’s president Bill Bossard says the company saw the writing on the wall in 2008, when it introduced its first fiber laser.

“We immediately realized the potential of fiber technology and decided to exit the CO2 market at the same time,” he says. “A lot of people were probably skeptical of our decision, but we knew then it was the right decision for us and our customers. CO2 will probably be around for a while longer, but there’s really not much a fiber laser can’t do at this point. Give them another five years and they’ll be the only game in town.”

“For us it was a very rapid transition,” he points out. “And we’ve recently added fiber to our punch/laser combination machines, so we definitely expect the trend to continue.”

Diehl believes CO2 machines – in the United States, at least – will soon become built to order rather than stock inventory items. 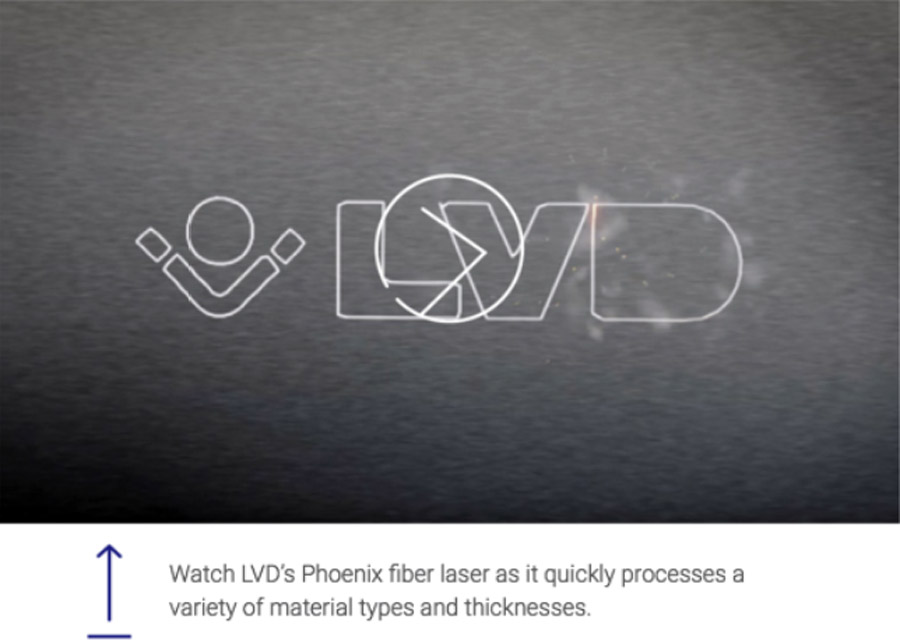 Like the other machine builders represented here, Amada has developed its own patented technologies that allows its fiber machines to cut the full range of materials formerly in CO2-only territory. These patents include unique resonator designs that provide precise adjustment of the beam diameter, and in Amada’s case, its process range expansion capability, which allows the machine to effectively cut brass, copper, titanium and other materials difficult to process on a CO2 machine.

Convinced? Most shop owners and management teams are. But not so fast: Fiber lasers operate in much the same manner as CO2 machines (although with far less maintenance and greater overall efficiency), but there are some things to consider before jumping in.

For starters, most shop people agree: size matters. Although, maybe not as much as you might think. Everyone here could sell you the biggest, baddest fiber laser in their product lineup, but Diehl warns that this might not provide the greatest ROI.

“We offer a 2-kW fiber that can cut 1-in. mild steel and outperform a 4-kW CO2,” he explains. “Granted, it won’t cut thicker materials as quickly as a 6-kW fiber, but you need to consider how often you’ll be processing those thicker materials, and in what quantities. It might mean the difference between spending $400,000 and $1 million.”

Safety is another concern. Because a CO2 operates at a wavelength of 10 microns, its light is inherently safer than the much shorter 1-micron wavelength emanating from a fiber laser. “So what,” you say, “everyone here follows safety procedures. Besides, the machines have guarding.”

That’s all well and good, but just recognize that any gap in the guarding due to improper maintenance or carelessness on the part of an operator who is comfortable with the relatively benign light coming from a CO2 can cause irreparable eye damage to the operator and anyone nearby. Always practice safe cutting with a fiber laser.

Consider the gases, too. Fiber laser works best with nitrogen. Have you considered how you‘re going to supply this decidedly not inexpensive gas? The message here is that if you’re going to play the fiber laser game, deal yourself in for the installation and upkeep of a large Dewar for storing nitrogen. Better yet, invest in your own nitrogen generator.

Finally, what about throughput? It might sound awfully exciting to zoom through light-gauge mild steel and aluminum with impunity, but what good does it do anyone if the laser-cut blanks pile up before downstream press brake or welding operations? Whether fiber or CO2, laser cutters are just one aspect of any shop’s throughput equation. Before investing in anything, be sure the rest of your machines are up to the task.