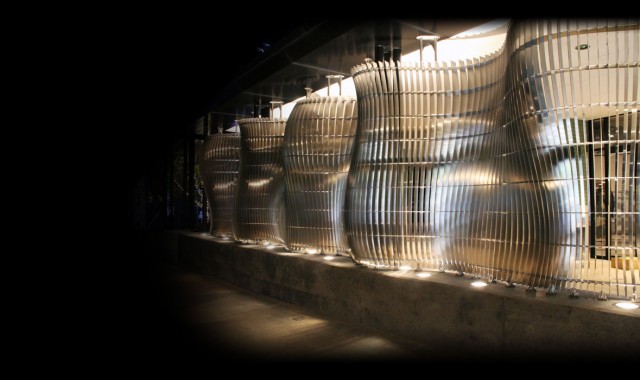 Stainless steel is wonderfully versatile. It has a high resistance to corrosion and it’s aesthetically appealing. It’s not surprising, therefore, to find it in a variety of industries and end products – from construction and shipping vessels to medical equipment and fine art.

Most grades of stainless steel can be welded and fabricated readily, but there’s a catch. The process of welding stainless steel mars the metal with an ugly brown heat tint, commonly referred to as the heat-affected zone. Not only is it unsightly, but it also weakens that area of the stainless steel, leaving it open to oxidation.

Although stainless steel is naturally passive, the welding process damages this thin chromium oxide film. Once this occurs, the stainless steel is said to have lost its passivity, and corrosion can become active in the defect site – the welded area.

Traditionally, cleaning and repassivation were only achievable through the use of highly toxic pickling pastes and gels or immersion acid pickling. Pickling pastes and gels are most commonly a combination of hydrofluoric and nitric acid and, depending on the concentration, exposure can cause severe burns and, in extreme cases, even death. Similarly, an acid pickling bath is generally a combination of hydrochloric and nitric acid, another concoction of dangerous chemicals.

Standard alternatives to pickling pastes and gels, however, come with their own set of shortcomings. Todd Cull, general manager at Diamond Mfg., a manufacturer of perforated metal, plastic and other materials based in Kansas City, Mo., described electropolishing of the company’s stainless steel as being a time- and cost-consuming endeavour.

“We got a real education in electropolishing and passivation on stainless steel,” Cull says. “First it’s costly. Second, it sets us back two to four weeks in production. And third, even the electropolishing can provide mixed results on the final product, such as hazing and white marks if all the acid is not neutralized in the overlaps on the sheet metal.”

As for the company’s experience with pickling gel, Cull says that some parts require 45 minutes for the solution to cure. And on top of that, the cleanup process is substantial. “No one wants to do that work,” Cull admits.

Luckily, the frustrations surrounding the cleaning of stainless steel at Diamond Mfg. didn’t last long. As Cull was flipping through an industry trade publication, he stumbled on an article about a TIG brush machine that he thought could be a real solution for the company’s applications. Cull and others at Diamond Mfg. discussed the possibility of investing in the TIG Brush and eventually had a company representative come into their facility for a demo.

“We were sold as soon as we saw the machine clean up our worst welds in seconds,”Cull recalls. “[The rep] even showed us how the machine could etch and mark on stainless steel, giving us the opportunity for added-value possibilities in our products. The only question was which machine to get and how fast could we get one.”

Development from down under

The equipment that Cull had discovered was developed by Ensitech, a company founded in Sydney, Australia, in 2006. The product, a fast, economical and safe alternative to traditional cleaning methods, cleans welding residue by combining an electrochemical process with a special brush and environmentally friendly cleaning fluids. Not only is it fast and economical, it eliminates the use of hazardous chemicals.

The development is the brainchild of Ensitech’s managing director, Clive White. He invented the system in his garage in Australia after a friend who had won a manufacturing contract from McDonalds Corp. asked him to come up with a way to clean welds. The market had a need, and so he developed the technology. The TIG Brush became the form.

In 2013, Ensitech opened an office in Chicago and introduced the TIG Brush innovation to stainless steel fabricators in the United States during Fabtech 2013. Unsurprisingly, White is encouraged by the positive response the TIG Brush has received in North America.
He believes its success is due to its quality, safety and simplicity. “It provides one-step cleaning and passivation, requires little user training and gives welders complete control over the surface finishing of their work,” he says. Ensitech continues to grow, acquiring an increasing number of distributors and TIG Brush users throughout North America.

Like Cull and the team at Diamond Mfg., Dan James, an engineering specialist at Key Technologies, was looking for a better and faster way to finish its stainless steel products. Key Technologies manufactures conveyor systems and automated food systems in Walla Walla, Wash.

“The TIG Brush is about three times faster than the machine we were using,” says James. “Another feature we like is that it does not scratch the surface and gets into corners easily.”

James also heralded the savings that his company experienced with the cleaning itself. The company’s previous machine had a pump applicator and used a lot of cleaner. He relays that dipping a brush is a better solution because it reduces waste. And like Cull, James was happy to see the system’s etching capabilities.

“We do a lot of etching, so I tested the machine by adapting a head and using the etching chemical we had,” he explains. “The TIG Brush took two minutes to etch and the machine we use takes 15 minutes.”

Applications outside the box

As well as providing solutions to stainless steel weld cleaning and etching, the TIG Brush is also being used throughout the stainless steel industry in new and innovative ways. Its capacity to prepare and finish stainless steel has been utilized in varying applications.

Spooner Industries, Ilkley, United Kingdom, is a good example of the TIG Brush’s success in unexpected applications. Spooner is a global supplier of technologies for the baking, drying, curing, proving/proofing, cooling and air-pollution abatement industries.

The company was dealing with a buildup of yeast contamination in the ducting and on the stairs into the ducting of its bakery, meaning that these stainless steel surfaces were continually rusting. To adhere to industry regulations and remain in operation, both of the surfaces needed to be cleaned on a monthly basis, which was an expensive and time-consuming exercise for Spooner.

A visit by a U.K. TIG Brush distributor, however, radically changed its procedure. Using one of Ensitech’s solutions, TBE-700, the rust was removed and the surface was re-passivated. Not only did this simplify the cleaning process, it also extended the length of time necessary between cleanings. On average, Spooner now only has to clean the areas every five to six months.

Another unexpected application was realized by Adrian Davis, a renowned artist from Queensland, Australia. Davis was commissioned to create a stainless steel sculpture for the entrance to the Queensland Gas building in Brisbane. The sculpture was a large wave, consisting of 370 single pieces of stainless steel.

One of the requirements of this commission, however, was that the artwork be delivered and installed passive. So, rather than send all of the pieces to Melbourne – a distance of 1,250 miles away – to be immersed in an acid bath for passivation, Davis contacted Ensitech and purchased a TIG Brush. Using Ensitech’s TB-31, a pH neutral weld cleaning fluid, he was able to passivate each section of the wave himself onsite, eliminating the need to package, transport and treat the pieces offsite.

In addition to the various end-user testimonials behind Ensitech’s revolutionary process, independent testing by Gauge Industrial and Environmental, using a scanning electron microscope (SEM), and The Welding Institute (TWI) immersion test to ongoing standardization ISO CD18069, have shown that cleaning with a TIG Brush and genuine TIG Brush fluids removes detectable oxides from the weld zone and returns chromium levels in the surface layer to equal or superior levels than those of unwelded surfaces.