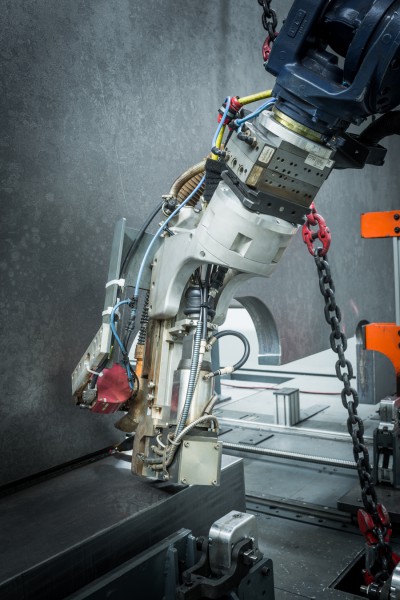 Ask people randomly what they associate with the word “sheet metal” and most would probably respond with something like “baking sheet” or “fender.” Chances are they wouldn’t picture what Herbert Staufer, head of high-power welding at Fronius International, comes across every time he enters the production hall at Trumpf Austria in Pasching.

The steel sheets there are 4 m long and so thick that the one on the bottom reaches to his ankle, measuring an impressive 200 mm. Staufer knows this material like the back of his hand – hardly surprising since Fronius is one of the leading suppliers of hybrid welding machines.

He generally visits Pasching as a customer, though he recently slipped into the supplier’s role for a project carried out jointly. His project partner and customer Thomas Reiter, who heads up sheet metal processing in Pasching, explains why Staufer was brought on board for the project.

“We’re welding these sheets to make the frames for our press brakes, and that involves some very special welds indeed,” he says.

To show how it works, the two men leave the steel sheets behind and wander over to a gray wall. It resembles the windowless exterior wall of a production building, yet is clearly inside the hall. The TruDisk 8002 disk laser standing against the wall seems tiny in comparison.

On the other side of that wall, inside the enormous laser safety cabin, a hydraulic system lifts the 20-ton weight and tilts the clamped sheets to the correct angle. A portal moves into place above the apparatus and a robot arm descends, carrying a laser hybrid welding head. It slowly passes over the first seam welding points, using laser light to preheat the material.

Now it’s time for the fireworks to begin: The laser beam and the arc of the metal active gas (MAG) welding torch work together to weld the joint. These welds are up to 8 mm deep. They will eventually support loads stemming from up to 320 tons of press force over and over again, for the entire service life of the press brake.

The best of both worlds

Outside the cabin, Staufer and Reiter watch the process unfold on a monitor.

“We used to send the frames out for welding – by hand,” Reiter says. “That took an entire week, and we were determined to make things more efficient.”

He immediately hit upon hybrid laser welding as a suitable solution, saying, “This welding process is much quicker because you only need a single pass – instead of having to build it up bead by bead as you would in arc welding. We’re also able to use the laser to preheat the material, and quality assurance is much easier in this automated process.”

That’s why he chose this solution as Plan A. There was also a Plan B just in case, an automated solution that would have worked with a conventional MAG welding robot.

“But there we would have also needed a preheating station and subsequent stress relief heat treatment,” Reiter says.

Nobody wanted that, but there was a big question mark hanging over Plan A, as Staufer explains. “We’ve delivered over a hundred laser hybrid welding heads in our time, but the thickest sheets we had ever encountered topped out at 10 mm.”

A change in plans

Rewind two years to see Reiter and Staufer sitting in the Fronius development laboratory, a place where they spent a lot of time during that period. They are baffled by a series of micrographs showing a weld root with numerous fine fissures and defects, making the seam unusable. And they had been so confident.

“With 8 kW of laser power, we were easily penetrating 12 mm into the material. But down in the keyhole, we had absolutely no control over the process,” Staufer recalls. The type of fissure suggested that the issue was preheating. “But no matter how much we varied the temperatures – and we had plenty of control for that parameter using the laser as a preheating tool – the fissuring didn’t change one bit.”

But then in one of their meetings Reiter and Staufer hit on the idea of turning their welding strategy on its head, “maybe because we were so close to forsaking Plan A anyway,” Reiter says with a chuckle. “We asked ourselves: Do we really need such a deep weld seam to create a perfectly stable joint?”

So Staufer and his team of laser experts at Fronius gradually began to reduce the weld depth. And when they got to 10 mm they were finally able to relax – the quality of the seam was improving continuously. “We finally got ideal welding results at 8 mm,” Staufer says.

With this partial victory in the bag, the project team could finally turn to the next problem.

“To achieve the optimum welding process, we needed the laser light to hit the material at the right angle,” Staufer says. “But the robot wasn’t maneuverable enough to reach every single weld point.”

Luckily, Staufer knew exactly who to turn to. Raimund Geh relishes this type of challenge. His company, Femitec GmbH in Gersthofen near Augsburg, specializes in designing welding systems. Geh explains how he approached the problem. “If the robot arm with the laser hybrid welding head couldn’t reach the welding point, then we would simply have to take the part to the welding head.”

The result was a tilting table with clamps to secure the sheet, which Geh and his team were sure would allow welding in the down-hand position. They developed a complex simulation to test their theory – but the next step was to put it into practice.

Yaskawa Europe – a leading manufacturer in the fields of drive technology, industrial automation and robotics – was the company chosen to transform their vision into reality. Otwin Kleinschmidt, head of project management, tilts the palm of his hand to the crucial 45-degree angle and says, “In principle it’s pretty straightforward. It’s a clamping fixture on a tilting machine table – it’s just a bit bigger than usual.”

The first challenge the team ran up against was how to design a hydraulic system able to hold a part weighing several tons solidly in position, at precision down to the millimeter. “That’s what makes it possible for the welding robot to stay exactly on the welding path,” Kleinschmidt explains. The other challenge was how to harmonize the movements of the robot and the portal. But after four months of work, everything was finally in place.

Back in the shop in Pasching, Staufer and Reiter are once again strolling from one machine to another. In front of them, the parts are waiting on pallets, and a crane is helping a production worker to position the sheets on the setup table.

It takes two hours to get everything exactly in place. That sounds like a lot. But bearing in mind the sheets the worker is dealing with, it’s an extremely quick solution. Next, the table moves along rails into the laser safety cabin. Once the welding robot is also on track, the worker moves to the other side of the safety cabin and starts clamping the next machine frame onto the second setup table.

“Using this system, we can weld more than 20 machine frames a week,” Reiter says. And Staufer is equally pleased: “We’ve already been able to use the welding process for a different order.”

This article was originally published in Laser Community, the laser magazine published by Trumpf.