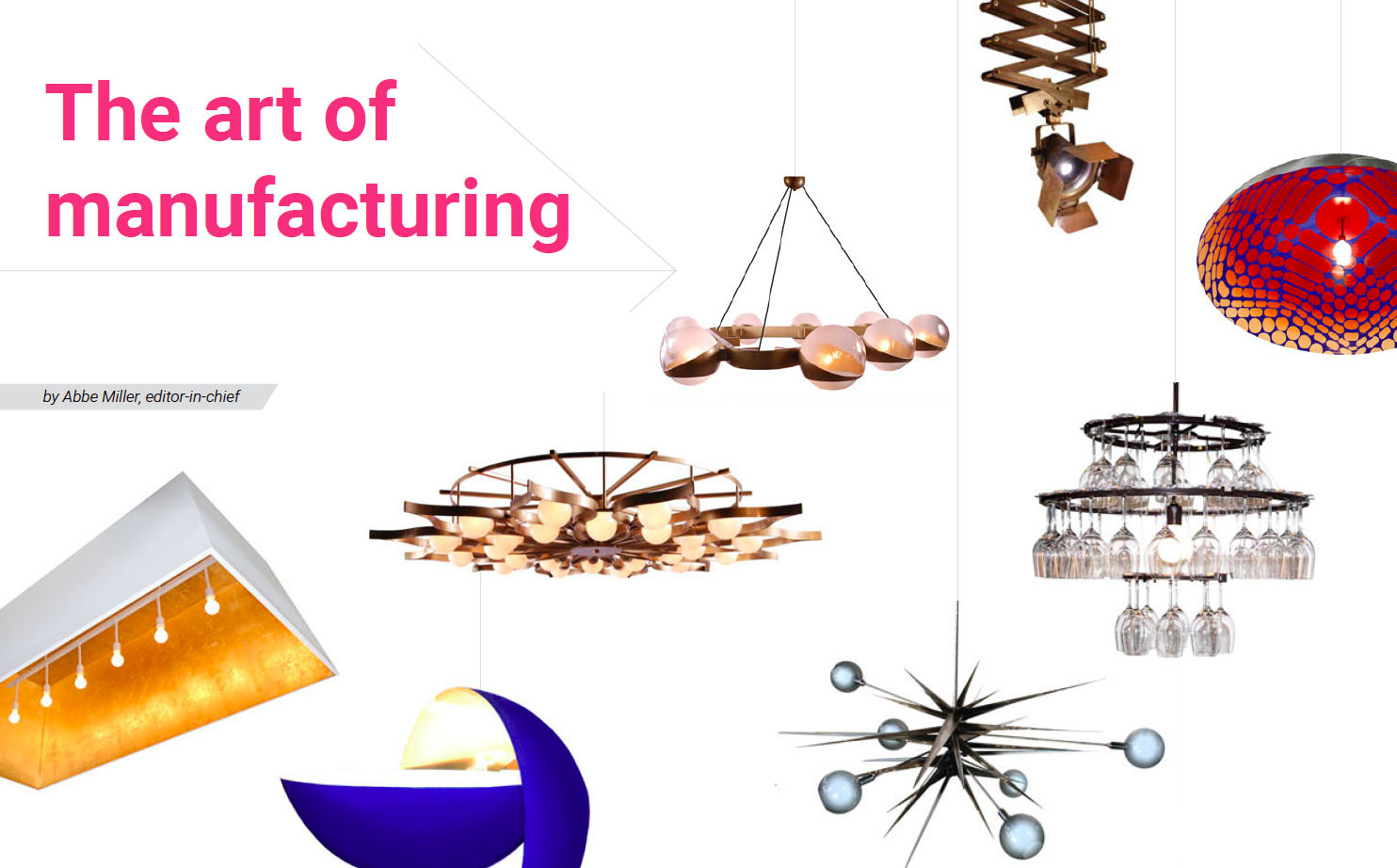 The portfolio of work found on Vision Quest Lighting’s website reveals a level of artistry not often seen on the manufacturing floor. The designs for the company’s custom lighting products are as wide as the imagination can wander.

Some are hand-painted in vivid and bold colors. Others shine in extravagance with the materials they’re made from, ranging from the expected steel and aluminum all the way through acrylics, 24K gold and crystal. Surely, artists are at work within the company’s walls.

Although Vision Quest Lighting bills itself as a custom lighting developer and manufacturer, it is just as much a collection of artists. Before meeting Marcus Lemonis late last year, however, the company’s sales had been slipping. The artists were starving.

Along comes a profit

Lemonis is the star of The Profit, a reality TV show where he finds struggling businesses and turns them around by investing in them, taking a share of the business and providing them with the leadership and guidance that they are often lacking. In the case of Vision Quest, Lemonis acquired 50 percent of the business for $375,000.

When Lemonis first met Larry Lieberman, the founder and president, he learned that Vision Quest had created lighting for the likes of Abercrombie & Fitch, Hollister, Universal Studios and Chanel. He also learned, however, that Lieberman had borrowed money from his daughter’s college fund to keep the business afloat. All the while, Vision Quest was drowning in outdated inventory and equipment.

Among the outdated equipment was a 25-year-old waterjet cutter, which Vision Quest was using to cut all of its material: steel, plastic, copper, brass, aluminum, wood and more. Anything that it couldn’t cut was being outsourced.

Therefore, part of Lemonis’ new role in the business was to help purchase a CO2 laser machine from Mazak Optonics Corp. To acquire the laser, Lemonis and Lieberman headed to Chicago for Fabtech 2015. There, they met with executives at Mazak, a meeting organized by Lieberman’s long-time advisor and friend, Ron Schuster, vice president at Federal Equipment, a company that specializes in new and used fabricating equipment sales. 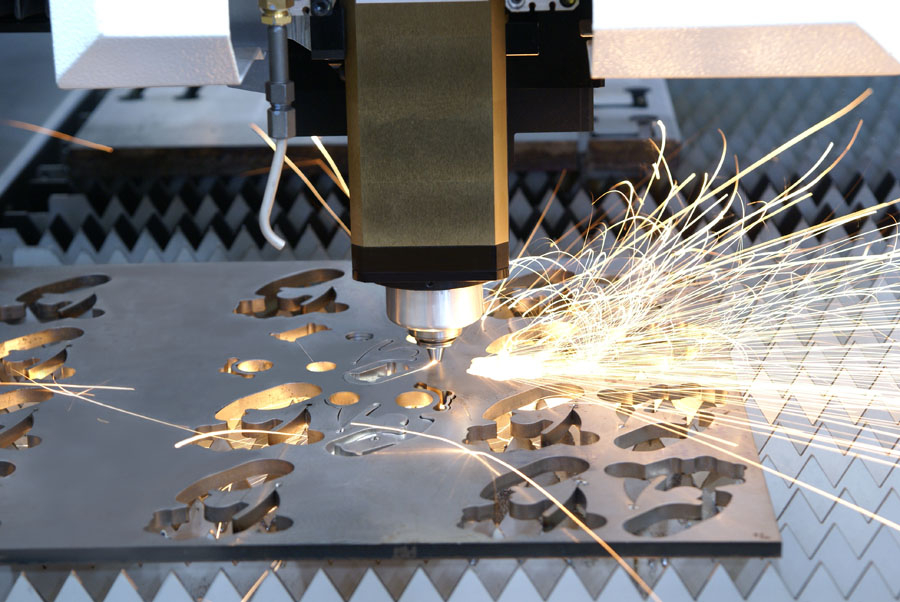 Checking off the boxes

Thanks to the insight they gained at Fabtech, Lemonis and Lieberman set their sights on the Mazak Optiplex Nexus CO2 laser machine in part due to its ease of use. Because Vision Quest didn’t have an experienced laser operator, the machine needed to have automatic features built in. The Nexus checked off several boxes in that department.

“For the first-time laser user, the Nexus is good choice,” says Mark Mercurio, applications and technical support manager at Mazak. “It has a lower investment cost but still provides some of the horsepower that we have in our flagship model, the Optiplex. Mazak looks for features that are operator dependent and then automates them.”

The Nexus also stood out for Lemonis and Lieberman because of its ability to handle tight corners and curves. It’s able to do those types of curves because of the position accuracy and the repeatability the machine delivers. This type of accuracy gives Vision Quest the ability to do the custom shapes and cylinder-type work that its creative designs require. The speed at which the machine is able to do that type of work is also impressive.

After learning about the laser’s benefits and then calculating a 53 percent return on investment, Lemonis and Lieberman signed on the dotted line and anxiously awaited its delivery. 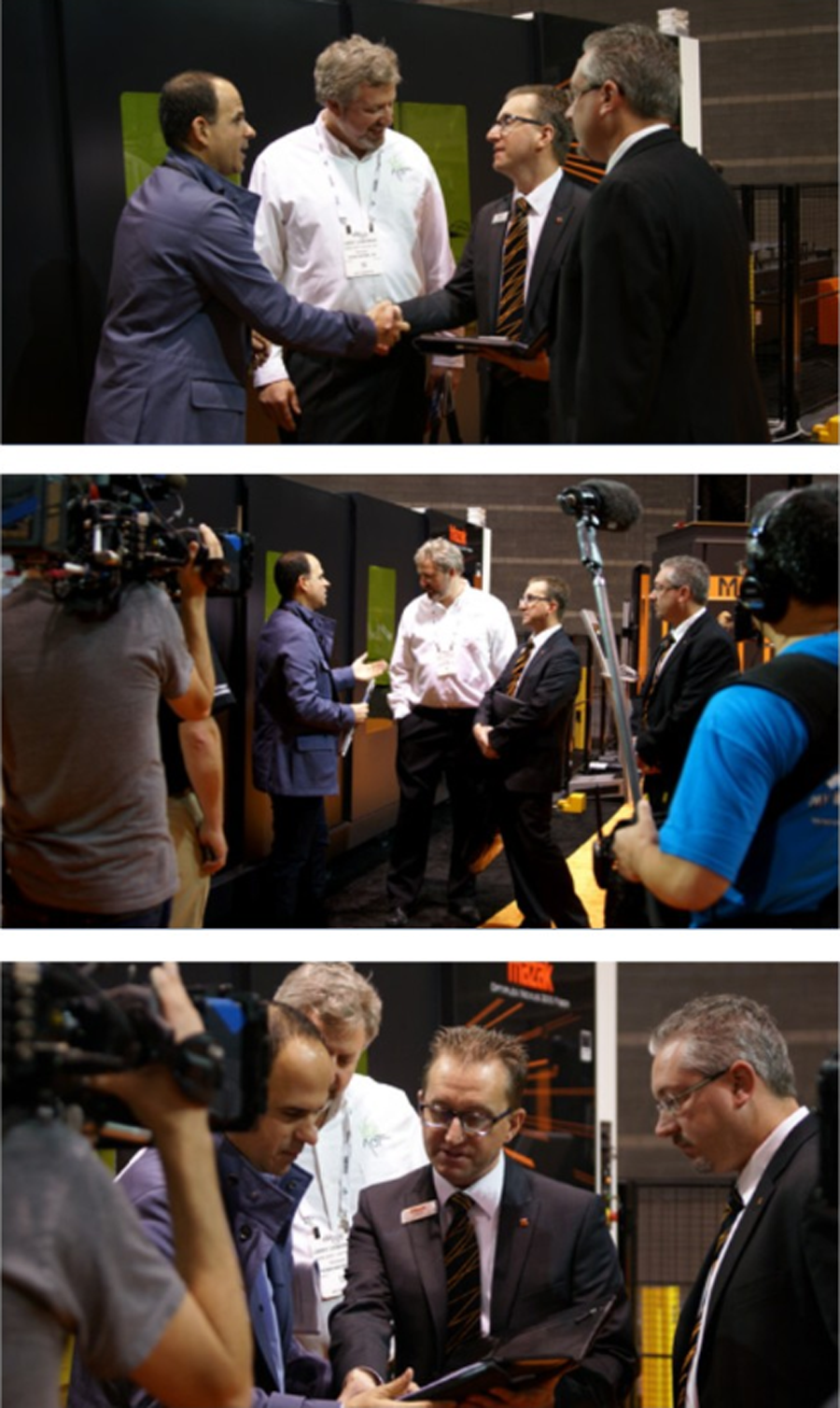 In a recent episode of The Profit, Marcus Lemonis, star of the show, and Larry Lieberman, founder of Vision Quest Lighting, purchase new equipment at Fabtech 2015 to replace outdated machines that may have been holding the company back.

By the time Vision Quest took receipt of the Nexus, Drew Norman, the current laser operator, had been with the company for three and a half years. Although he went to school for CNC programming and had overseen the company’s waterjet and turret punch, he had no experience running laser cutting equipment.

“For basic coordinate systems and programming, the laser is completely different compared to what I was used to running,” Norman says. “I went to Chicago for a week for training with Mazak and picked it up really fast. To make my life easier, Mazak figured out the tech tables we use – the parameters and cut conditions. From there, I just have to tweak them based on our preferences.”

Mercurio says that Mazak provides cutting recipes for all of its customers for the various materials that the machine can cut. During training, instructors teach new customers like Norman what all of those parameters mean for establishing a good cut and a fast feed rate. When customers get back to their facilities, the goal is for the machine to be nearly plug and play.

And that was definitely the case at Vision Quest. After a short period of time, Norman says that he was confident operating the laser. He’s become so comfortable using it that he now has been tasked with training a second operator, which Vision Quest recently hired by working with community colleges in the area.

“It’s just like running a normal computer,” Norman explains. “We just set up the network, so now we can hook up a computer or a USB to it to transfer programs. It has touch-screen controls, making it, overall, a safe and easy-to-use machine.”

Basically, the Nexus can be as advanced or as simple as the operator needs it to be. It‘s what Mercurio describes as a machine with NC/PC control.

“It’s a split control,” he says. “We use the NC side to run the geometry programs. But then we also have the PC side of it because of how easy it is for customers to use. Overall, it has huge storage capacity for programs and networking capability. It’s the best of both worlds.” 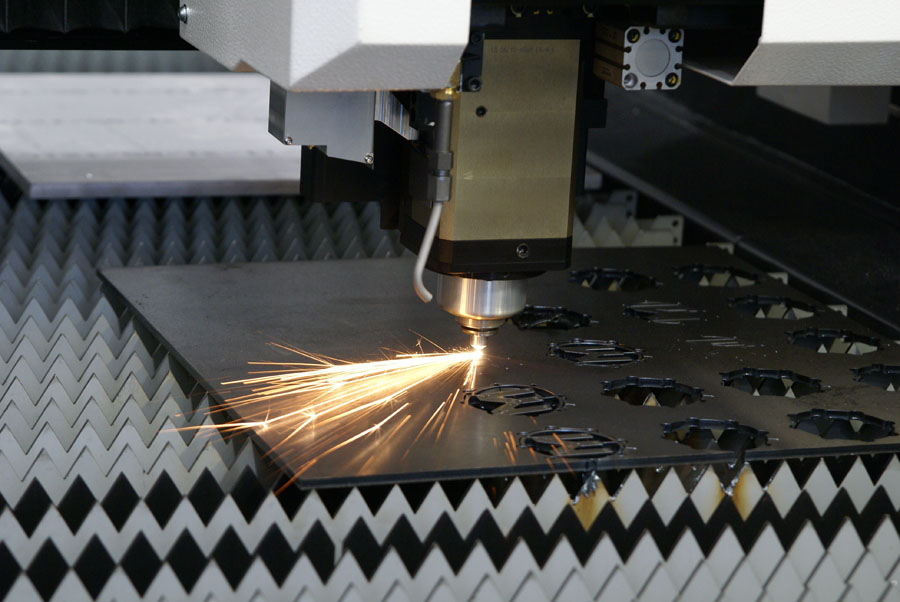 Since introducing the Nexus at Vision Quest, Lieberman and his team are able to cut materials faster and with a better edge quality than they were able to on their waterjet.

Although Vision Quest’s waterjet is an older piece of equipment, it’s still a workhorse. For the time being, there are no plans to get rid of it. In fact, it’s proving to be the perfect complement to the company’s new laser.

“It’s true that you’re going to be able to cut some materials on the CO2 faster and with a better edge quality than on the waterjet,” Mercurio says. “But there are some things that the laser just can’t cut – like brass and copper – and that’s what the waterjet still handles. Vision Quest cuts all different kinds of materials – even wood and plastic.”

The level of plastics that Vision Quest processes was also part of the justification for purchasing a CO2 versus a fiber laser. Mercurio explains that while a fiber machine can cut wood, there are some acrylics that it can’t cut due to the different wavelengths of each technology.

“A fiber laser beam would go straight through clear materials, which is why you see green windows surrounding fiber lasers,” he says. “If you put that clear acrylic on a CO2 machine, you’re going to be able to cut beautiful parts on it.”

Acrylics, wood and red metals, though, only make up a small portion of Vision Quest’s material mix. Lieberman says that up to 90 percent of what they process is the types of metals that are perfect for CO2 cutting.

“Our products put out a lot of heat from light, which we’re trying to dissipate through metal, so most of our products usually start with a metal structure,” he says. “In addition to cutting metal, we also roll it, grind it and weld it. Essentially, we’re 90 percent a metal fabrication shop.” 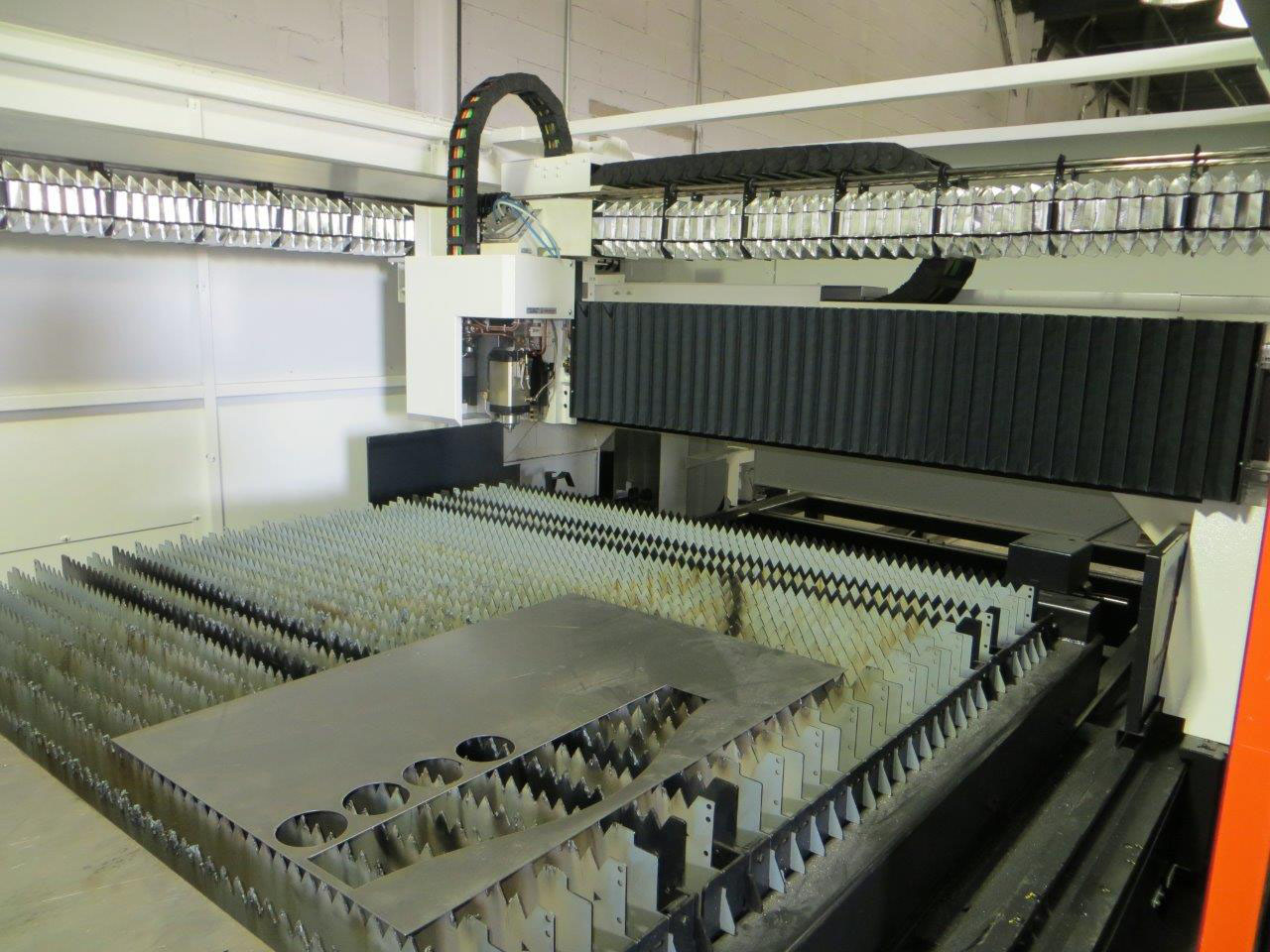 Once Vision Quest Lighting took receipt of the new laser cutter, Mazak helped the team get up and running by providing them with parameters and cut conditions.

When it came to purchasing the Nexus, ease of use and wide cutting capabilities were important, but that was just a portion of the justification. The way the laser affects downstream operations also played a big role in the decision.

“We’re now able to cut more accurately without a burr,” Lieberman says. “Previously, we used a turret punch that caused burrs that had to be removed in a secondary process. Today, however, the Nexus significantly affects our throughput because we’re able to produce clean cuts that are much more delicate than we were able to in the past. Before, post-processing would sometimes destroy a product. Knowing that this isn’t a problem anymore, I’m able to consider using new designs with that in mind.”

Torrey Bievenour, executive vice president at Vision Quest, reiterates the benefits that come from the Nexus in terms of downstream operations.

“We push for maximum integration and maximum flexibility,” he says, “so it’s key that when a part comes off of one system, it’s ready to go straight onto another.”

Decreasing the steps that it takes to get a part out the door is essential for any fabricator. At Vision Quest, assembly is a big part of the downstream portion of production. Therefore, they take advantage of the laser’s marking function to etch parts with indicators that help staff match parts with original product drawings.

“The staff at Vision Quest is inventive, and they’re creating a product that has to be pretty to the eye,” Mercurio says, “but there are still a lot of parts that look very similar to each other. With the etching function, identical parts can be tagged to simplify the process.”

He goes on to say that switching from cutting to etching is seamless. During programming, the operator can indicate whether one feature is an etch and whether another feature is a hole, for example. The software then scans the geometry of the sheet and looks for what needs to be cut and what needs to be etched. It then completes the etching across the entire sheet and then changes the setup and goes back to cut the features out.

Downstream operations are also improved thanks to the Nexus’ ability to cut a wide variety of materials, like wood. Bievenour says that the Nexus helps in the assembly process due to the fact that they can now create jigs on it.

“We found that we could cut 3/4-in. wood with the laser, which is great for jigs” Bievenour says. “But truly, the etching capability allows us to mark cross hairs or roll lines, essentially allowing the part to become the help jig itself without needing a lot of additional hard tooling.”

So clearly, the Nexus is helping Lieberman and Lemonis streamline operations at Vision Quest, a task that was long overdue. And although dramatic surges in revenue don’t happen overnight, so much has changed since Lemonis first walked through the company’s doors. Today, Vision Quest is better organized and better equipped for the quick turnover rates its customers need. Morale, too, has increased now that the artists at Vision Quest have the right tools to bring their visions to life.